I Asked for a "Mythical" Video Travel Tripod, and Benro Made It a Reality with the Aero

Earlier this year at WPPI in Las Vegas, I stopped by the Benro/MeFoto booth to tell the team how much I loved the MeFoto tripod... but it was lacking in just a few places for a traveling videographer. Yes, the MeFoto was really compact, light weight and quick to set up, but I wanted clip locks and a smooth video pan head without sacrificing the size and weight the MeFoto offered. It seemed like an impossible request, until seven months later they delivered me the Benro Aero.

I can best explain my emotions when I heard the mythical tripod I somewhat offhandedly asked for mere months earlier as shocked. I in no way thought this tripod was ever going to happen. I was halfway kidding when I asked for it, thinking my request would be laughed off like anyone's would when asking a big company for something specific.

Yet here it was, in my hands, everything (and more) than I asked for. It was beautiful, and it was perfect. Well-built, nearly all-metal design (it has plastic parts in non-load-bearing areas) that feels like a winner the second you get it in your hands. I have used it on three location video shoots since receiving a review model, and it has taken a beating without question. 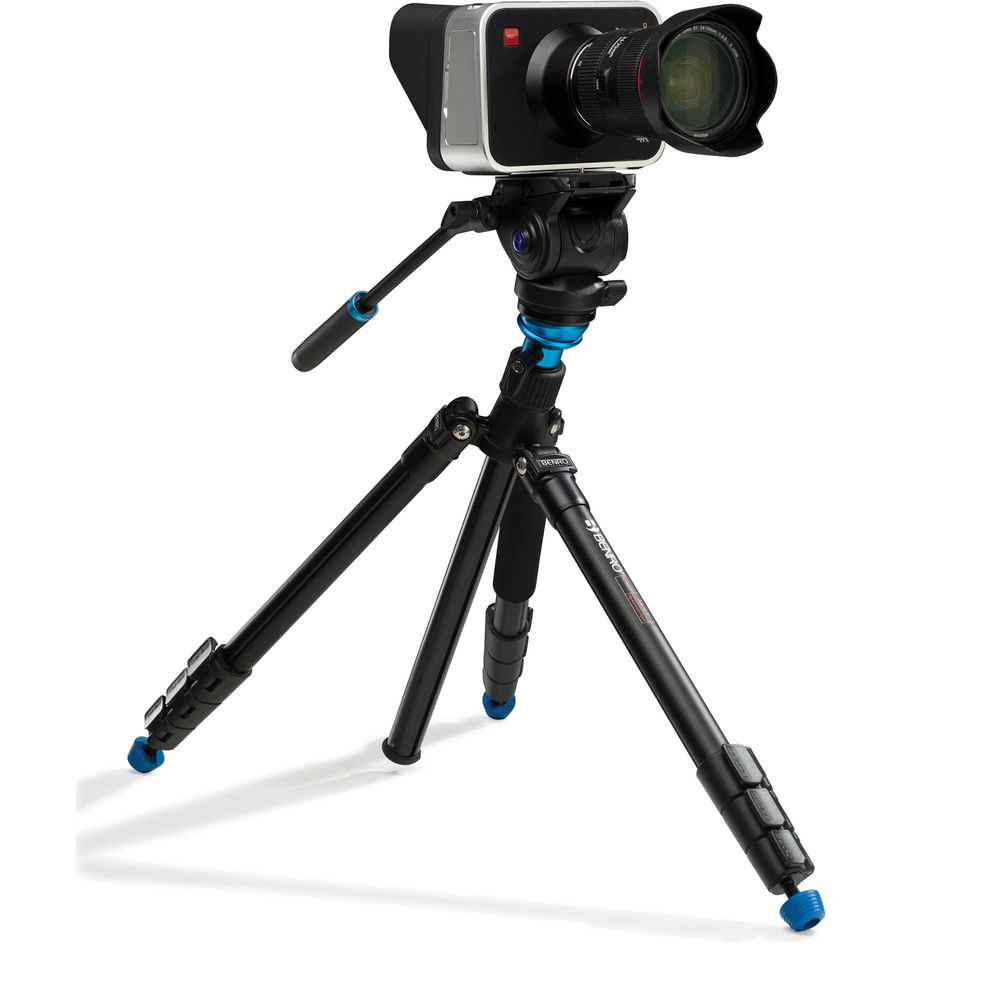 The Aero takes the tried-and-true design of the MeFoto, with an adjustable center column and flip-up legs, and builds on it with the smooth S4 video pan head, adjustable ball base, clip locks and all-terrain feet. Everything I love about the MeFoto is in the Aero, but now it's built especially for traveling videographers like myself. The pan head is pretty easily removed to allow me to either pack it into a carry-on bag (yes it fits) or mount my slider on it (which I do all the time). 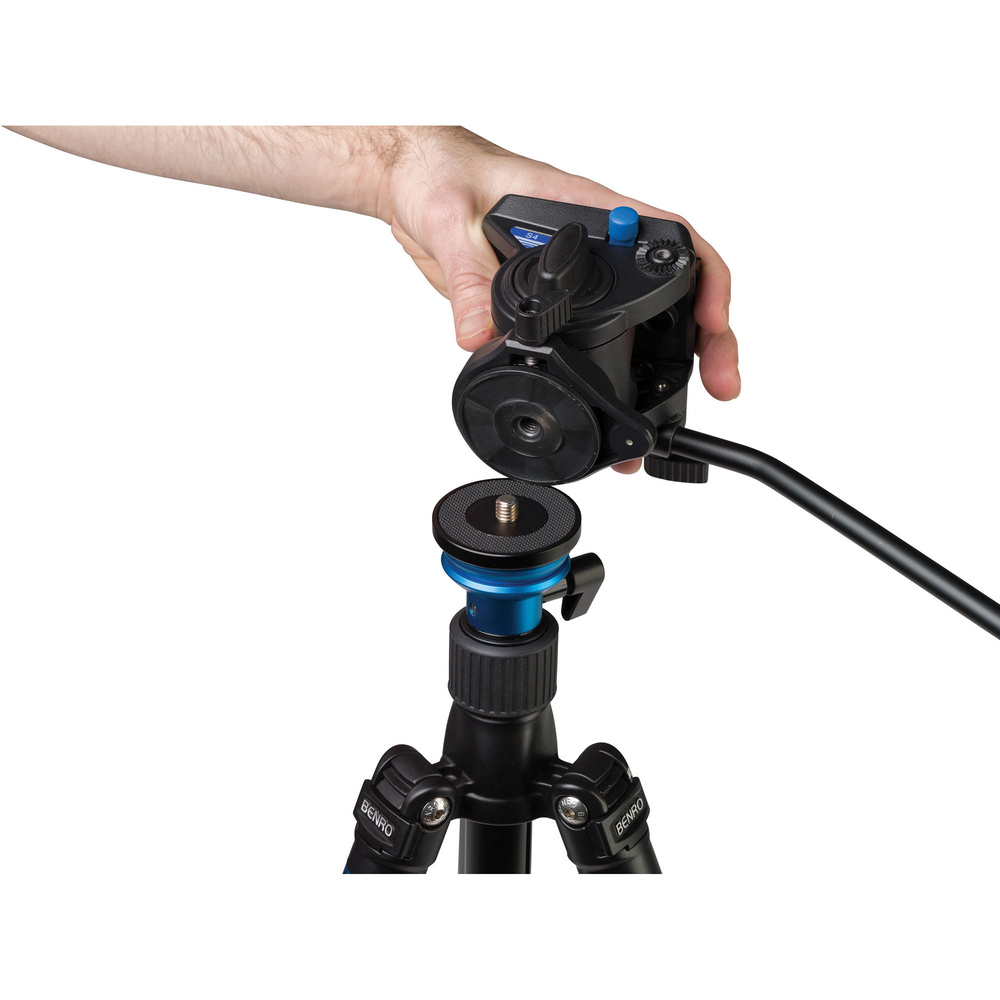 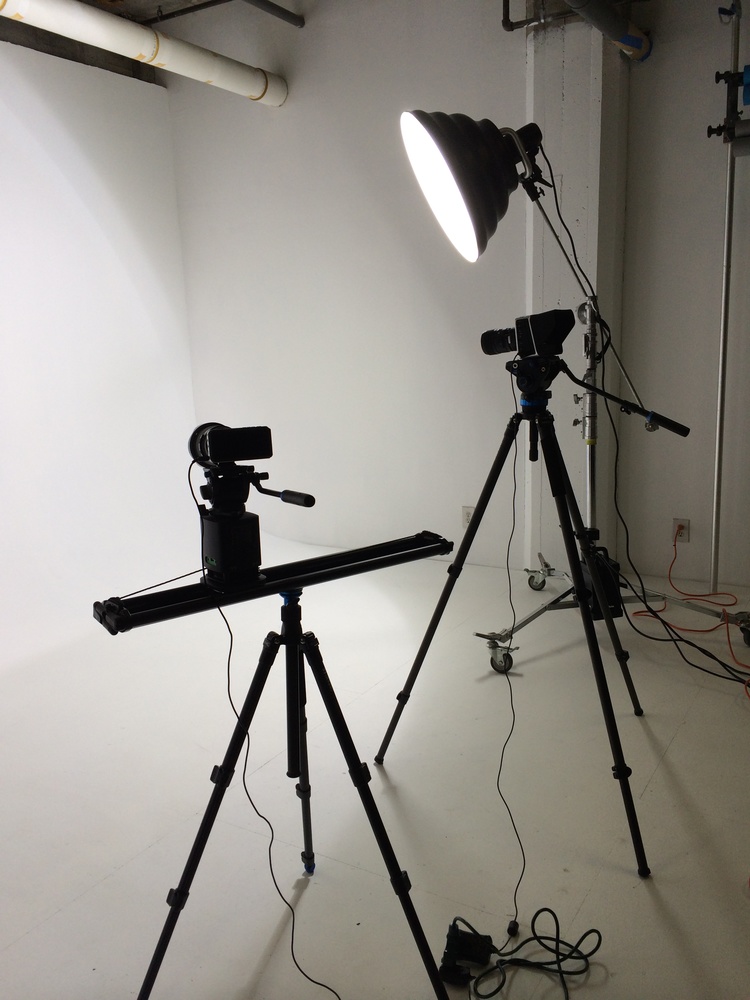 Benro Aero on the left, Benro S8 Video Tripod on the right.

Let's start with the S4 video pan head. The head itself is what I would classify as "medium to small" in build, and is perfect for DSLRs and mirrorless cameras like the Panasonic GH4 or Sony a7S and capping out at cameras like the Blackmagic Cinema Camera. It's a bit small for larger cameras like the Sony FS700, but I don't really classify that as a travel camera anyway. The pan head is beautifully smooth and locks down tightly, both enormously important aspects of a solid tripod head. The S4 unscrews from the base, which brings me to my next favorite thing about the Aero. The base of the pan head is also a ball head. So in addition to using the legs to level out a shooting space, the ball head gives you that one more piece that can work together with the legs to assure a stable yet flat shooting surface. The addition of this one more layer of customizability on the tripod makes it that much better than any other compact tripod I've ever used. 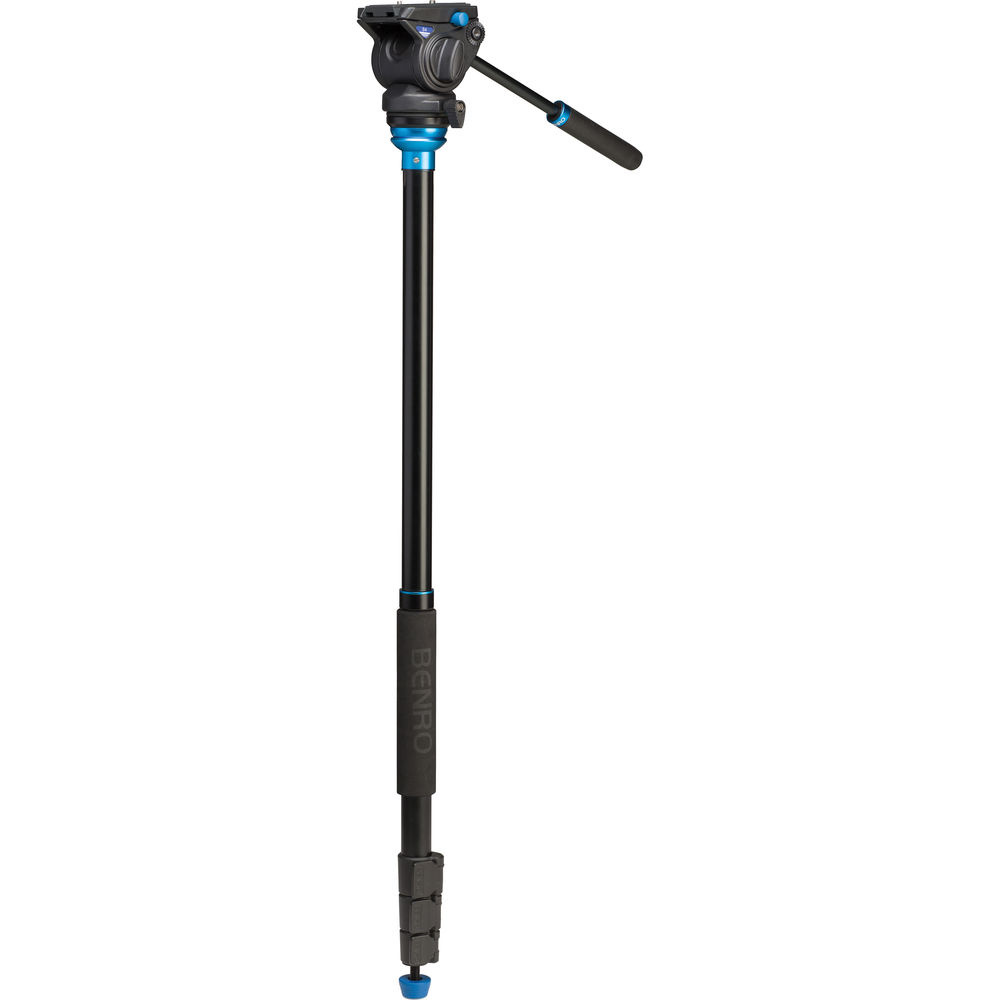 The same as is found on the MeFoto, the Aero's midsection can detach and connect with one of the legs, giving you not only a tripod but a video monopod all in one package. Though it would lack the foot of other popular video monopods, the fact that it even has this option is a bonus. Speaking of the Aero's midsection, you can also sandbag the tripod from it, increasing stability in windy environments. 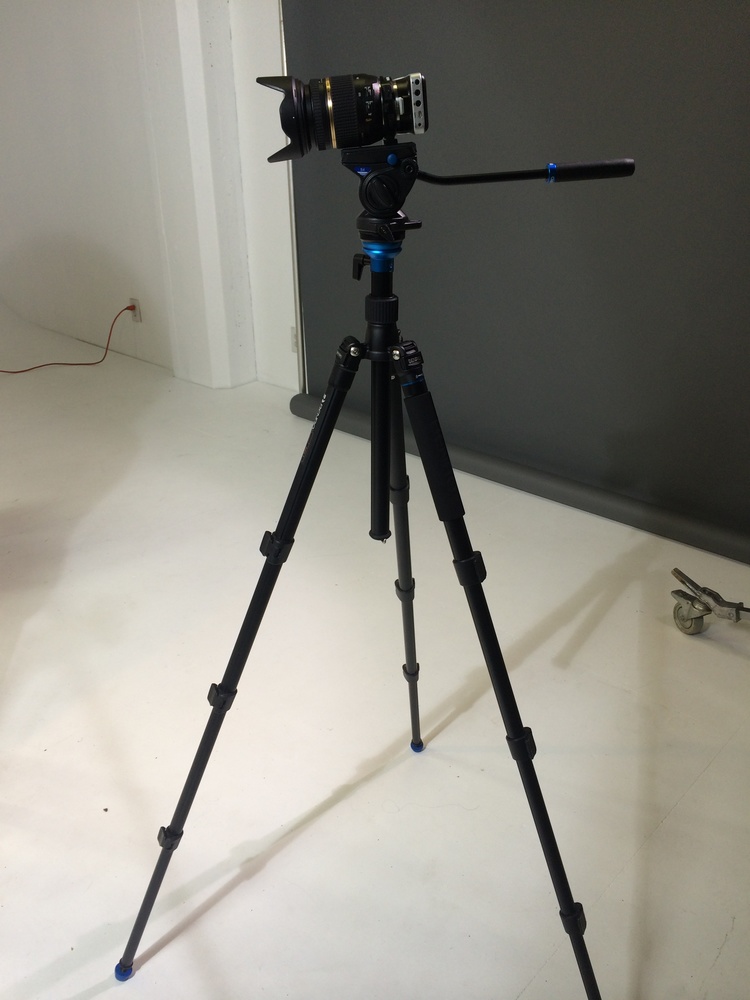 The Aero's legs can lock into three positions, depending on your need for stability or your environment. The tripod has a maximum height of about 62 inches, but that is with the midsection fully extended, which is not ideal when it comes to stability. You'll find yourself using it at the collapsed midsection height of 50-52 inches more often than not. Though this isn't incredibly tall, it is generally enough for what I shoot. There have been few situations where I thought it was too short, and in those cases I just propped it on a table. 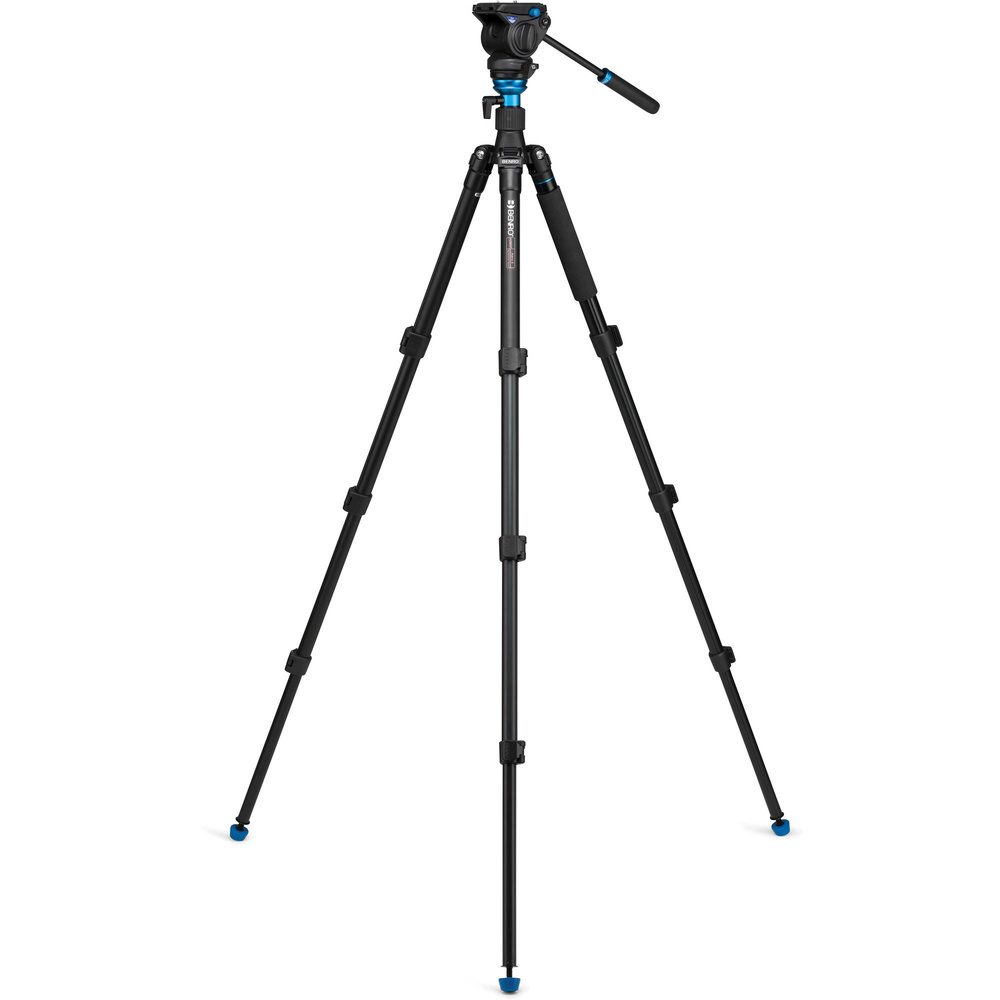 I personally prefer clip-lock legs when shooting video because of how much faster they are to adjust in documentary-style shooting situations. I understand there are pros and cons to clip locks (such as sand being an issue), but when compared to the MeFoto twist locks, my experience with the tripod has been improved.

The final piece of the puzzle, the thing that makes me pick this tripod over my Manfrotto carbon fiber video tripod, is that it packs down small enough to fit in my carry on luggage. I can fit it, my Edelkrone slider as well as a few other accessories all in one bag, making it indispensable when traveling. It comes with its own carry case, but I choose to pack it in a hard case or even in my Lowepro roller.

The tripod is light, but it's not the lightest video tripod you'll find. This is one of the only places I think the Aero could be improved. It's by no means a deal breaker, but I do notice the weight of the tripod when I compare it to my carbons. Also the Aero has the same flaw that the MeFoto has when it comes to the center shaft: you can't lower the tripod directly onto the ground desipite the willingness of the legs. You can only go as low as the center shaft will allow, which is low enough in most cases, but not ground-level.

What could be improved 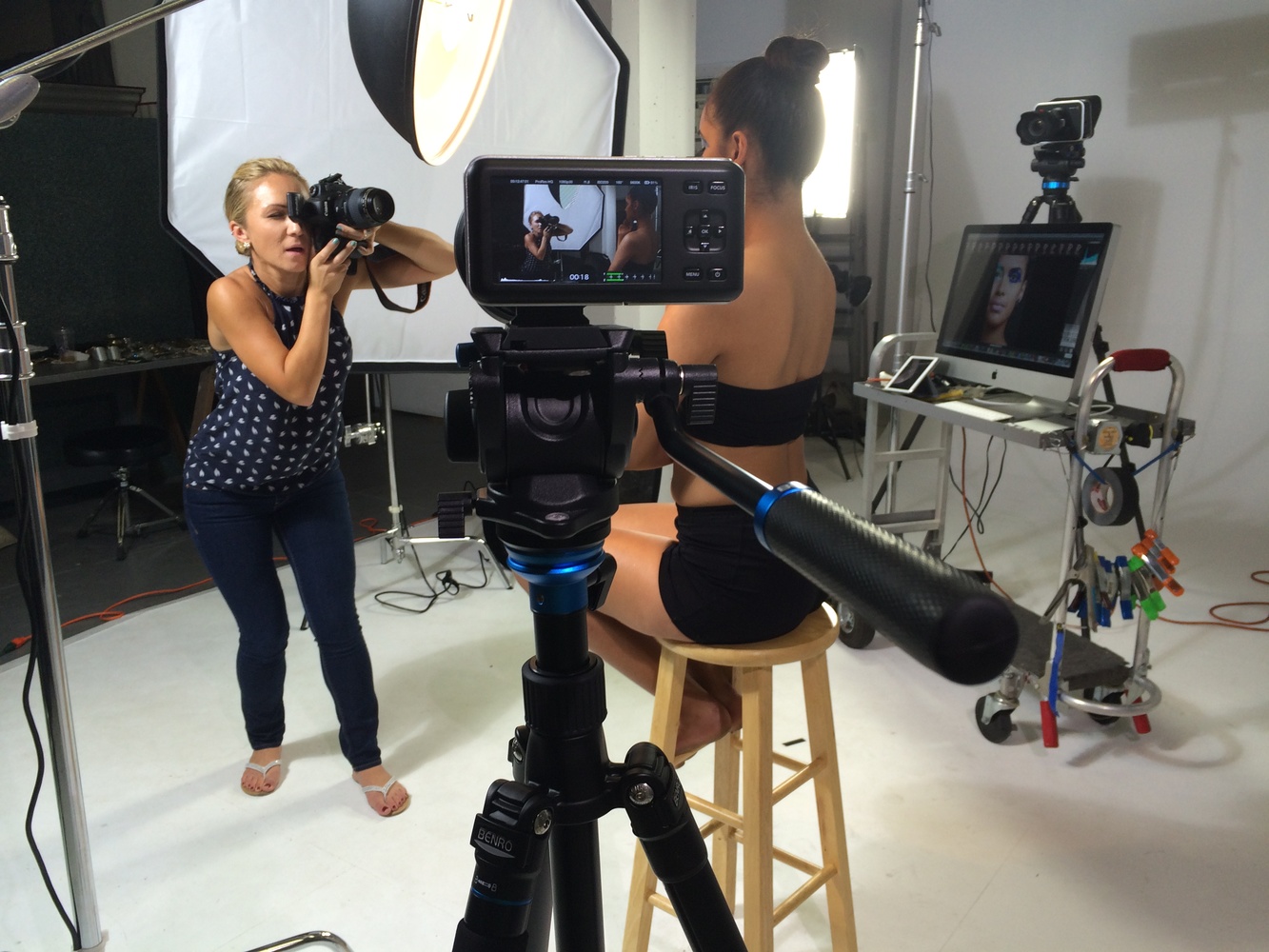 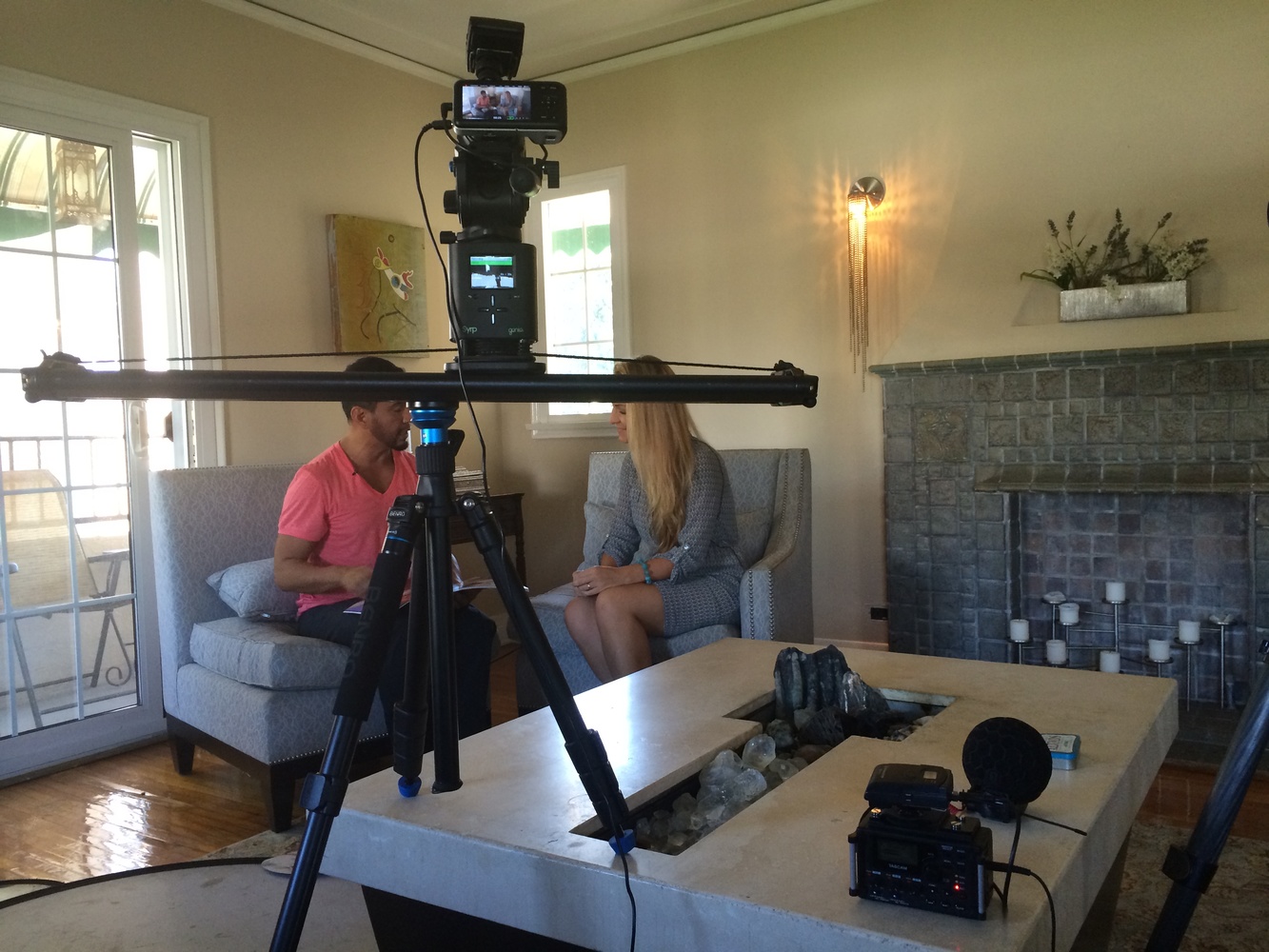 This is the tripod I considered to be an impossible build when I first asked for it. Small, relatively light weight, sturdy and designed for the traveling videographer? It seemed like a tall order. If anything, when compressing these many requests into one product, you would expect it to falter somewhere. The Aero does everything asked of it and delivers without question. It is easily the best tripod I've ever used in a travel setting and is my go-to tripod for work on location. I could not be happier with Benro's latest offering.

It's just a tripod

you're just a tripod

I was thinking of getting the photo version last year, but the only head I have that might work on it is the Manfrotto 502..and it's probably too heavy still. So how does the Aero head compare to other heads?

I would say it's a better than average pan/tilt head. It's not as firm as the top-of-the-line heads available, but that's due to its size. For anything similar in size it's hard to beat it. It's def better than my Manfrotto compact pan tilt head.

This looks pretty slick. So you can level it ball-style but still pedestal it up to adjust height?

Correct! I love it.

What woukld you pick, Aero4 or the manfrotto 535? (i know the price difference, but they both looks to fit my usage. Heavy dSLR sometimes in a slider 1m with a genie (1.5kg)

Nice review. I do a lot of traveling and need to shoot both stills and video, so this seems like a win-win. From observing your photos, it looks like you've got quite a bit of weight with the combination of the Syrp Genie and a slider. How does it hold up? And (OT) how do you find the noise of the Genie when you are shooting with audio?

I own it. It's great but be better in carbon fibre.

Hello. I purchased this tripod entirely based on your review and photos of working with the SliderPlus, however attaching to the ballhead means the entire system "dips" or "buckles" when the motionkit extends to the edge of the slider. How do you secure it in place? Or is there a way to mount directly to the legs? Thank you!