'Look at That View!': Landscape Tips for When the Weather Doesn’t Agree With You

For anyone that’s tried shooting landscapes while on vacation, you know the weather isn’t always agreeable. While it can be frustrating, the challenge can present new opportunities and sometimes rewarding results.

Fog presents great opportunities for landscapes, particularly if it’s working towards clearing up and there are patches, or you are right in the thick of it. The only issue that I’ve ever come across in shooting in fog is that after a while, it can result in condensation on your lens. I’ve also found the inability to see much of any scenery far off (see lead image for a wonderful picture from Mount Royal in Montreal). When the fog is thick, the trick is to place yourself right in the middle of it, find an interesting enough subject, and be able to get a good distance between you and the subject and the subject with the background. If the background is too close, the fog won’t provide much separation. If the background is too far away, it may not even show up. Ideally, fog will provide a nice separation between your subject and your background without having to rely on a shallow depth of field, which may not be feasible for a wide-angle lens. 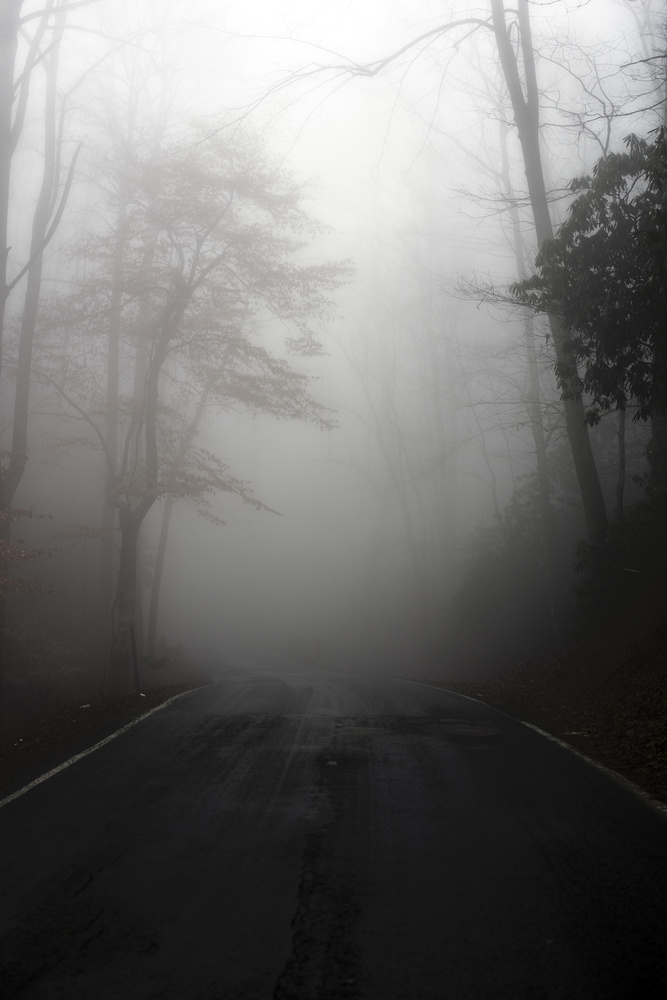 If the fog is a bit patchy, a telephoto lens can really make a big difference. Too wide of an angle could result in seeing both ends of the patch of fog, which limits the imagination. Instead, closing in the frame enough to leave some of the scene fog covered and some of it not will stimulate the viewers imagination.

All in all, there should be little to hold you back. Even the most mundane of scenes can look so beautiful with the right amount of fog. For all intents and purposes, fog arguably doesn’t even count as adverse weather, since it so easily makes just about any scenery look mystical. 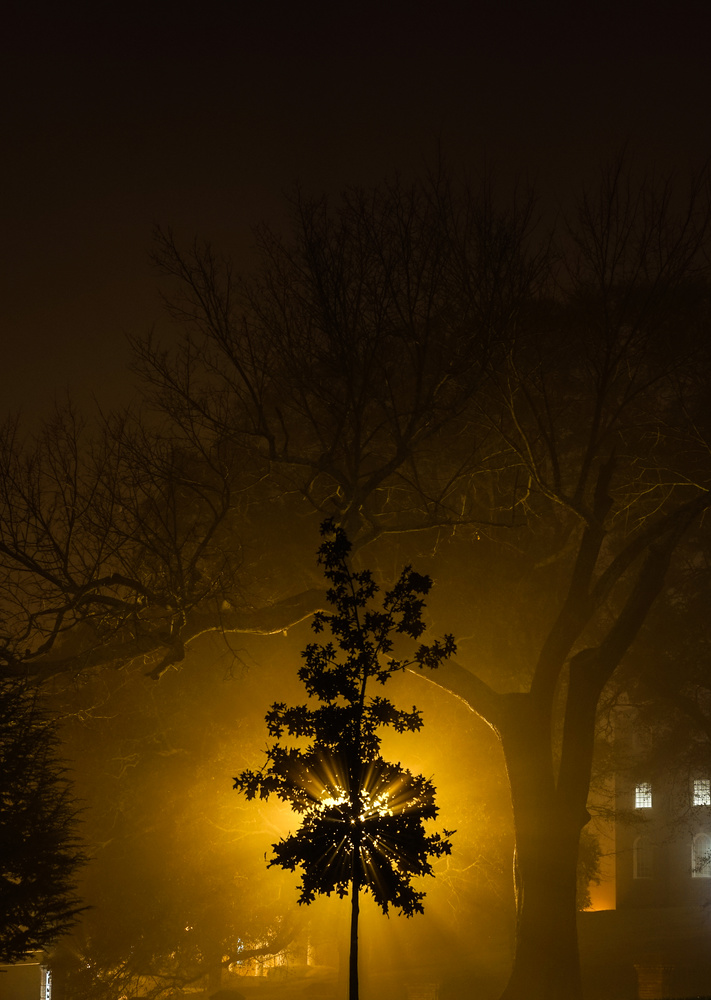 As you may know from a previous article, I love shooting in the winter. The more snow, the better! Even a blizzard can really make for a nice picture so long as you can keep the equipment dry. In brief, if you’re using aperture priority mode, I would suggest upping the exposure compensation up one or two stops to ensure that the white snow stays white rather than going gray. If you’re using a handheld meter, this problem can usually be alleviated so long as you’re not metering for middle gray. 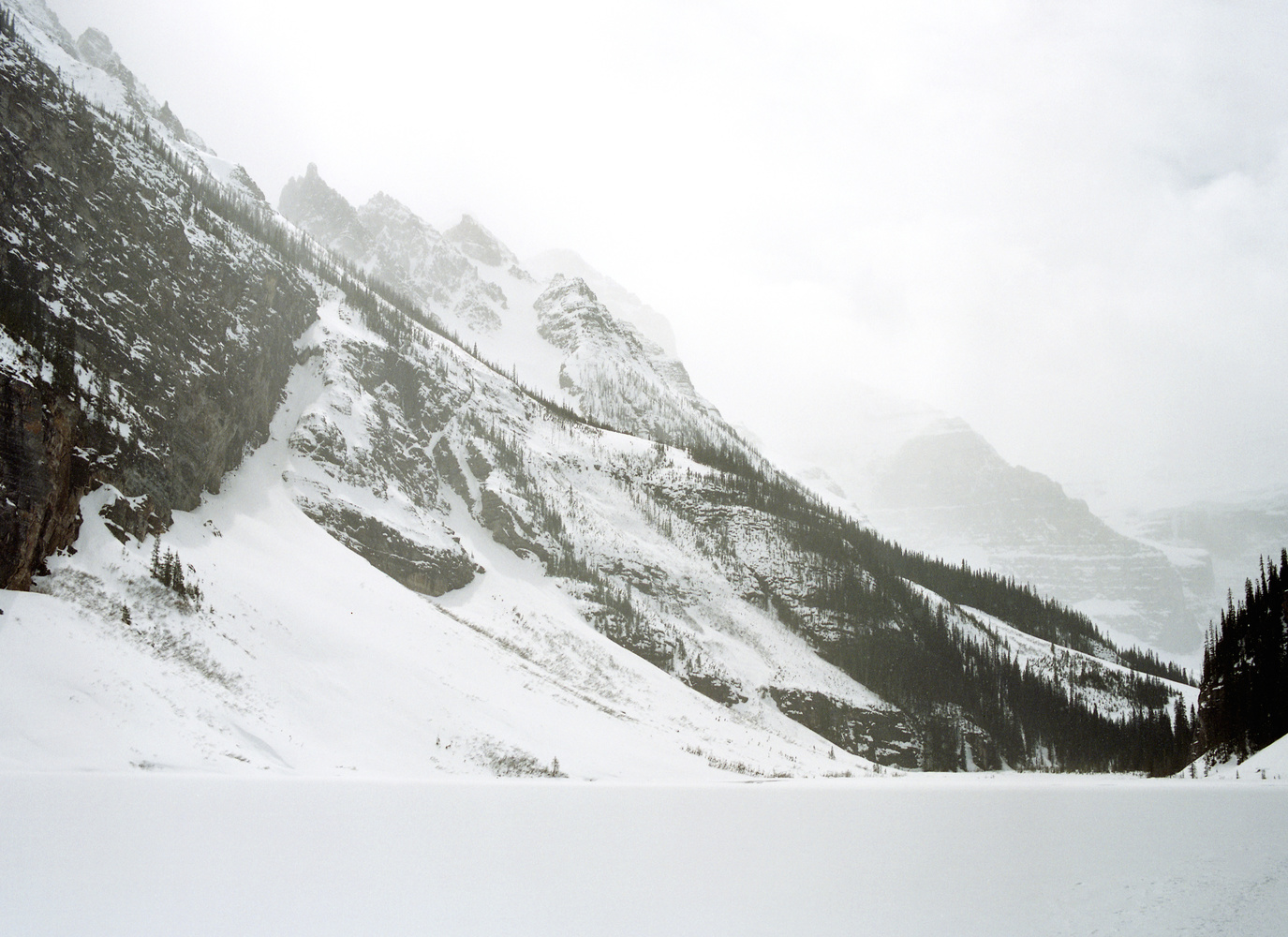 There are some things to keep in mind, though, if you’re shooting while it’s snowing. The most important thing to consider is staying safe. I highly suggest crampons (i.e., ice cleats) to help stay on your feet. Gloves and a hat that covers your ears are crucial for ensuring you stay warm. I find that most people don’t appreciate the difference between staying warm when they’re in transit from their car to a building or vice versa and standing outside in the cold, particularly if, like me, you shoot film and periodically, you have to sit down and change out film while you’re still in the cold.

In addition, I would suggest getting your lenses acclimated to the cold prior to shooting. I’ve heard that some people leave their lenses in the truck of their car the night before, but I’ve never done that. Instead, I just pack up my equipment in the trunk on the way to wherever I’m going, and inevitably, they’ll be where I need them before I arrive. If you’re taking long exposures, some people keep warmers on their lenses to keep them from getting condensation on the front element. Additional considerations include keeping your battery warm while you shoot. Ideally, you will have a backup battery with a full charge that you can keep in a warm place until you need it. Indeed, the cold weather goes through a battery charge quite quickly. 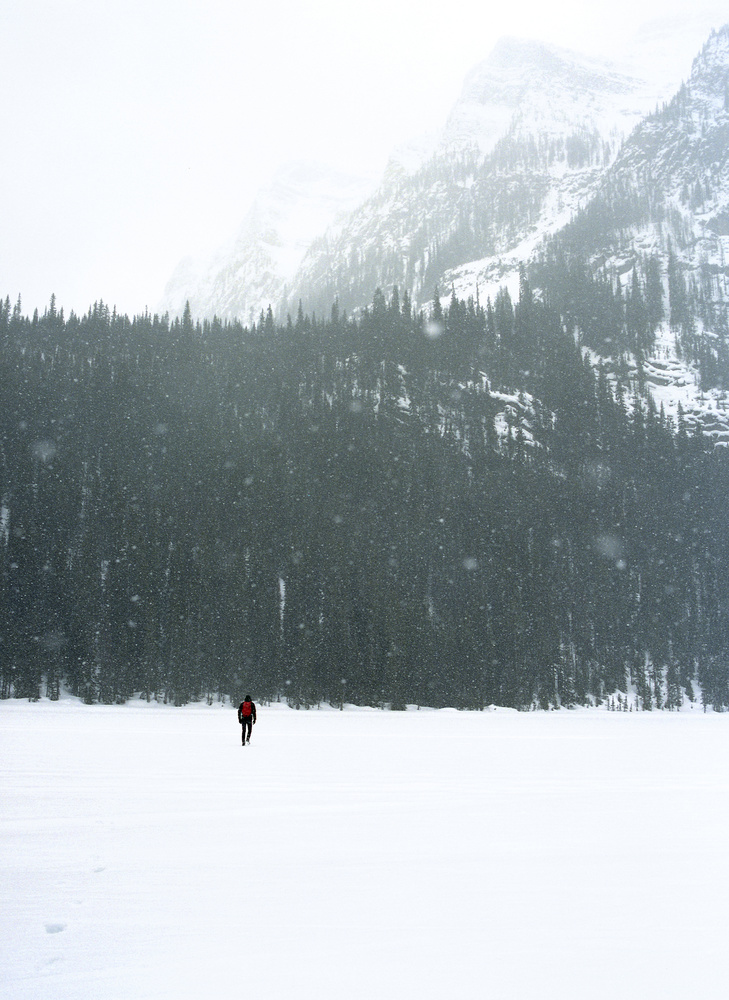 Shooting in the rain is by and large the most uncomfortable situation for me. Even with weather-proof lenses and/or cameras, an outright downpour would abuse my equipment more than I care for. (I’m not sure if it’s an unfounded fear or not, but I worry that if I expose my lenses too much to the rain, I’ll get fungus in them that will then spread to all of my other equipment. If you know this to be an unfounded fear, don’t judge.) Depending on the strength of the rain, I don’t even go out to shoot. If it’s just misting, I have found that it can act a lot like fog, but with a much greater chance of moisture on the lens. As such, I treat those situations like I’m shooting in fog, but I make a more conscious effort to keep the lens cap on at all times when I’m not actively setting up the camera or making the picture. 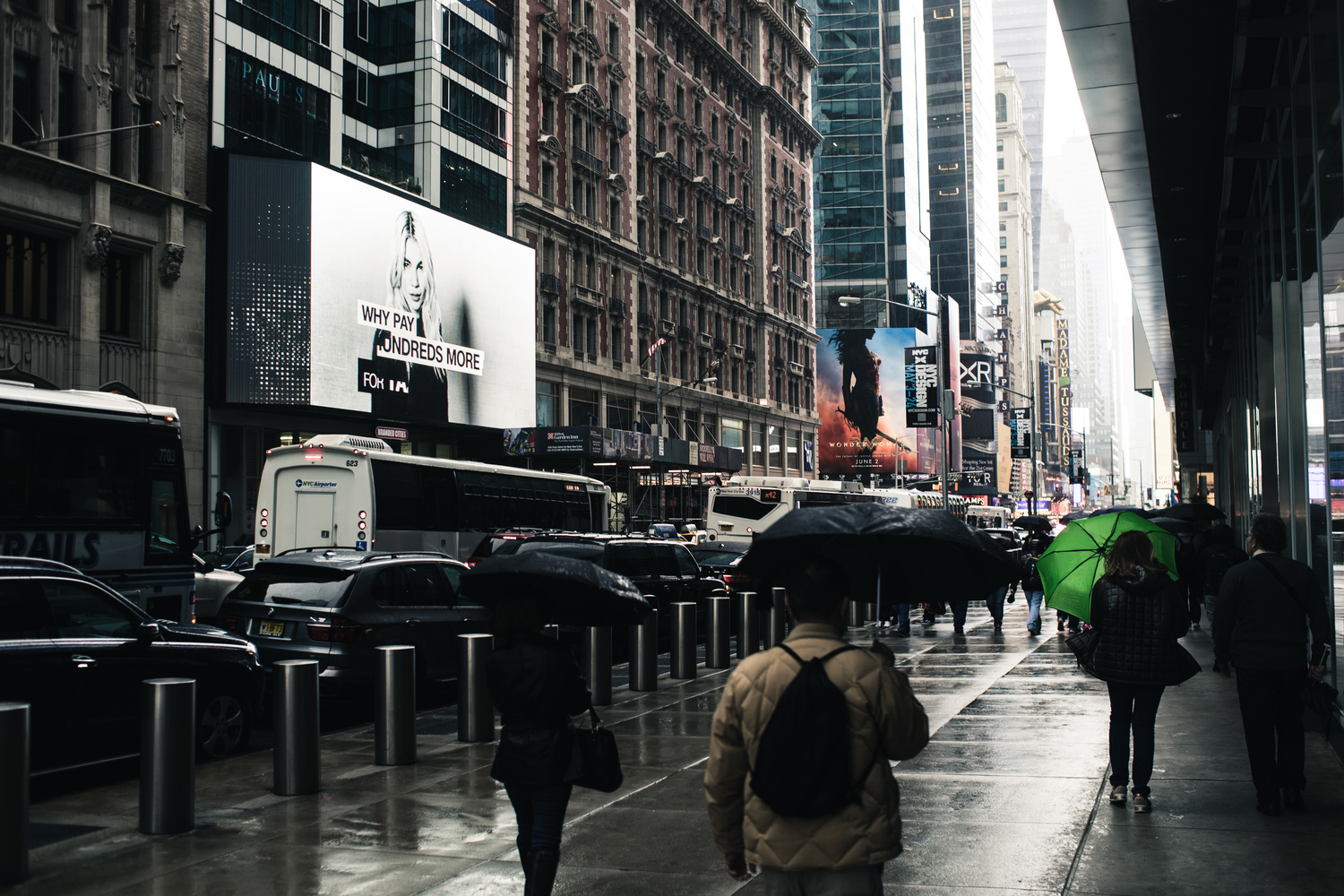 Personally, I’ve never tried using an umbrella to keep myself dry while photographing, but I know some people do. I can’t imagine it’s particularly easy, but I once saw a guy riding his bicycle down the street, handing the steering with one hand and holding an umbrella with the other; if he could that, surely, I could hold an umbrella with my camera on a tripod. Conversely, up to this point, I have preferred to hop in and out of cover to take my photographs, and in the in-between, I have all my equipment in a waterproof pack.

Alternatively, taking the advantage of photographing indoors is perfectly reasonable and sometimes preferable. At least for me, if I’m exploring a new city and the options are walking around in the rain or finding a nice spot with a nice view, I have a nice pint while I wait. Most of the time, I find myself going through several shots once I’ve found cover and a nice libation. In particular, if I know I’m getting towards the end of a roll, I go through with finishing it off before I head back out so I can change my film where I know the camera internals will stay dry.

Aside from the note just above, I suggest taking into consideration the color balance situation. Most often in adverse weather, the color temperature is a bit too cool for color negative film or slide film. So, if you don’t have a warming filter, I would suggest sticking with black and white film if at all possible.

What are your thoughts on shooting in adverse conditions? Is it something that you have any experience with?

Nice article with some good examples and good food for thought! Especially living in Western Washington where the weather... often ... "doesn't agree".

Man, I would love to visit the PNW. The mood and lushness of the area is pretty amazing. You should post some of your work to your account.

To me it seems as if weather just CANT agree with me ever. Thanks for your tips, gotta try it next time I do landscape

Depending on where you live/are shooting, I could definitely see that being the case. I always keep my hopes up for good weather when I go on trips but more often than not, I find myself in some rough weather.

Great tips. In upstate NY the weather is usually not agreeing with being out shooting. I love making the most of it and going out in all weather. My biggest advice is to protect the gear and yourself. We have a local waterfall and i love heading here in downpours and heavy rains to catch it at its best. I'm just beginning to find the joy of shooting in fog hoping as we switch to spring to have more opportunities.

I love Upstate NY! My family is from the Ithaca/Cortland area. Shooting there after a snowfall early or late in the season has become one of my favorite areas to photograph. I've never been there when it has been foggy but I bet it's gorgeous.

I'm from the Binghamton area and Ithaca is nice. I did get to shoot Watkins Glen state park in like a summer hazy/ humidity which was awesome. One of my favorite trips out was taughannock falls state park in winter. Ice on the sides water flowing and blue sky. Snow has been fun shooting inits the grey time between fall and winter and winter and spring that is tough. This image is from Windsor NY after a snow storm. Fall is where this area shines though. 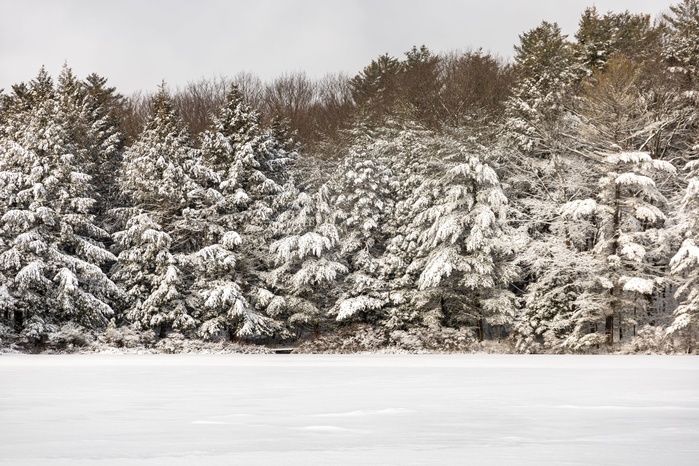