Review: Anthem One Could Be the Next Great LED Light to Save Your Production Big Bucks

Anthem is a new company. So we didn’t know what to expect when we sat down with their new LED light that promises to far outlast any HMI while promising the implied savings that could drive down production costs.

The Anthem One isn’t just any continuous LED light source. Every aspect has been designed to perform at its highest level. Heat is the enemy of long-lasting LEDs, so Anthem designed their debut light system to dissipate heat better than other lights do.

Unique to the Anthem One is that it doesn’t use bulbs; it uses a light card. These cards are interchangeable. And while it’s recommended to apply a tiny amount of thermal paste to the new card upon replacement, this step isn’t necessarily required, but does help keep your LED light card working for over 50,000 hours.

Furthermore, these LEDs undergo a stringent binning process, which is the process by which the best and most stable-performing LEDs out of the entire lineup are selected for use in the final manufacturing process. Other low-cost and mid-range LEDs bring costs down by having a wider acceptance rate. The result of Anthem’s process is a light that throws an extremely uniform beam in both brightness and color temperature.

Another neat part about Anthem One is its ability to scale well. As a cube, this light can snap together with others thanks to an easy-to-apply mounting bracket to hold it all together. Four Anthem Ones snapped together can supposedly go head-to-head with a 10K HMI light in terms of lumen output.

While the cost of an Anthem One might not be that far off from what you would pay for a similarly powerful HMI, the savings begin when you don’t have to replace the bulb in the first few hundred hours. Instead, of buying a $200-$500 bulb every 400 hours, you will only need to get a single $170 light card every 50,000 hours. And while an HMI bulb will drastically change color temperature and power output as it nears and reaches end of life, the Anthem’s light card still puts out 70 percent of its light output and maintains color temperature once it reaches its “end of life.” Even if the specifications shift slightly, that’s hardly unusable.

The flexibility of switching light cards to other color temperatures, brightnesses, and even wavelengths is another huge benefit. Ultraviolet and infrared light cards will also be available for military, industrial, scientific, and agricultural applications, but even for the filming applications alone — on which Anthem is concentrating the most — the potential is impressive. 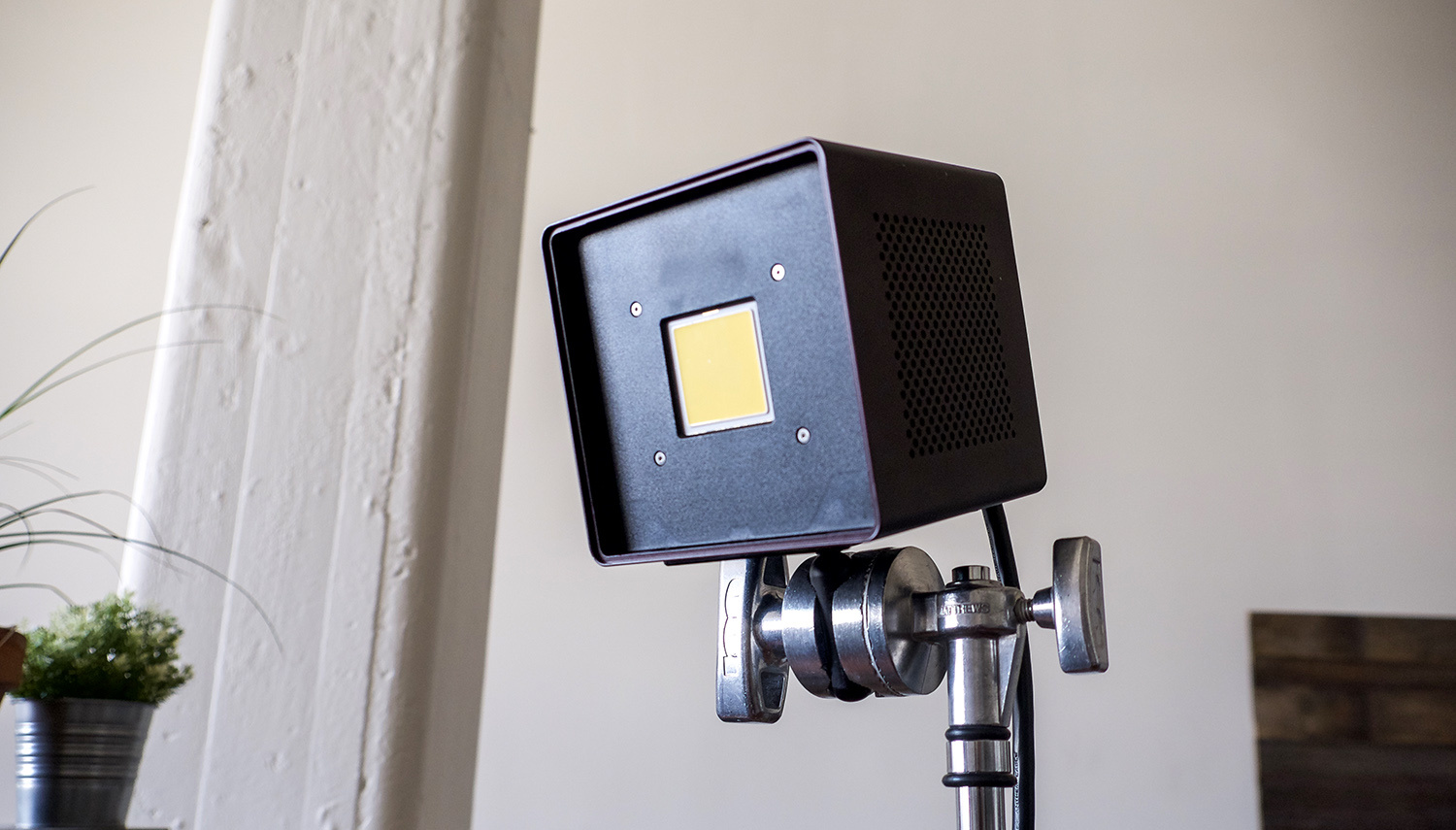 For our tests, we just loaded up the light on a C-stand without any modifiers (not even the normal front fresnel lens or anything).

While the light card obviously gets quite hot, the light as a whole stays cool with a fan that I couldn’t hear unless I held my ear to the unit. I didn’t want to fully test the durability of the Anthem One by dropping it, but the company’s founder and chief engineer, Justin Evans, certainly didn’t have an issue with that:

Since the Anthem One is based on LED technology, it comes with the same power savings of other LEDs, which means it’s a perfect candidate for a battery-based power delivery system. With Anthem Power Plus, Anthem One can run for up to three hours at full power or six hours at half power. The Anthem Power unit itself includes the power supply that comes with the regular Anthem One kit and is similar in size, but only slightly longer to accommodate the battery. While we couldn’t test this unit, the specifications make sense for the power output, and a few of these alongside a few Anthem One lights could impressively power an entire grip truck worth of equipment for far less than the cost of the truck itself — and it can all fit in the trunk of your hatchback.

There are a few things I didn’t love, such as the proprietary power cables, which were supposedly created to keep costs down while still ensuring the proper certifications could be met. But while Anthem’s cables seem to be feature similar or slightly better pricing, it’s difficult to make a case for this decision that will require propriety cables going forward. Of course, when considering the overall cost savings of the system, the requirement of getting a few extra cables is hardly worth being bothered over. And compared to other industry-standard setups, it’s nice that these cables are at least user-replaceable.

Issues such as the non-hard-stopped dimmer are also small. It’s nice to be able to dim the light to the degree that you can to begin with. But Evans also mentioned this is something that can be changed in the future, as it’s easy enough to do (even for existing units) with a simple swap-out of this knob. The dedication to improving the product in both large and small ways such as this is something that has to instill some trust at the very least.

Anthem One is already available and shipping today with everything you need to get started in black or silver metal housings from B&H for $1,499. While Anthem Power Plus is available separately for $999, the kit that includes this and the Anthem One light ships for $2,499. B&H will also have a hands-on event May 8 at 8:00 PM.

I met and talked at length with them at WPPI this year and was very impressed with this. Great to see what your experience was with it.

Do you know about the cri of the unit? I looked on their site and I couldn’t find anything.
Also just a heads up, 4 of the lamps would equate to a 1600w hmi according to the website.

And you are correct about the mis-claimed 10kW equivalence in the article.

Just in case you want to save a couple of thousand dollars you can just build this: https://www.youtube.com/watch?v=c--5c3Egv4E

We're a huge fan of DIY Perks and his LED builds. But, comparing his "Sun-Blaster" to Anthem One isn't an accurate comparison:

2: DIY Build's electronics will not withstand abuse. Its a fantastic quick-and-dirty hack but it isn't designed for longevity or safety. The traces on DIY Perks' PCBAs may not be able to handle the voltage or amperage and will eventually burn out.

3: The claim of "as bright as 1,000 watts" is comparing it to an incandescent/tungsten, not an HMI. DIY Perks' light is closer to a 800 watt tungsten. Anthem One is brighter than a 2,000 watt tungsten or about as bright as a 400 watt HMI with a wide lens. You're accidentally comparing apples to oranges.

4: The DIY Perks' device has no CRI rating.

6: The DIY Perks' device is significantly larger than Anthem One.

7: The DIY Perks' device has a hard-mounted glass filter, glued in place. The glass is refracting heat back into the LEDs, which will accelerate the rate at which they decay. Fixing a lens in place with an elastic band and glue is also bound to fail quickly.

8: There is no way to accessorize the DIY Perks' device.

9: The LED-COB is hard-soldered and can't be replaced.

10: The batteries are the same kind that caught on fire in hoverboards around the world.

11: Because the system is only 100 watts, its a low-voltage system. Its a fraction of the work and technical detail of Anthem One.

But, we think DIY Perks is still an amazing DIY'er and maker. In fact, if he's ever looking for a job, we'd love to interview him. :)

20k-30k lum is impressive but not that great, I've created boards that shoot out 100k lumens and a couple of kw. There are also industrial flashlights that can shoot 45k.

While I agree with some of your assessment, I use to work for a south Korean SMD company doing marketing for their line of LEDs and CRI rating can be had from the manufacturer.

While yes DIY has its disadvantages to it, there is a huge disconnect in manufacturing that I don't believe makes these products worth it.

I can make dozens of throwaway lights and get the same power and conditions and come nowhere near the cost.

That batteries remark is kinda stupid, 1 cheap lipo company doesn't mean that all lipo batteries will catch fire if that was true all of our cell phones would catch. You can also use RC batteries as well.