The Toy That Changed a Photographer's Life

The little red toy car sat on a shelf, serving no purpose. It was inanimate, nothing more than the die-cast metal pieces of which it had been constructed. But it caught the eye of photographer Felix Alejandro Hernandez Rodriguez and an idea — a character — was born. Hernandez changed the car and brought it to life, and in turn, the car changed his life.

Three years go, Hernandez, a Cancun, Mexico-based commercial photographer, found himself feeling restless. He enjoyed his work well enough, but when it came to fulfilling his creative visions, his paid projects weren't enough. He needed to do something else, something that came strictly from within his own mind's eye. What that project was, he didn't quite know. Until he spotted the red car, that is.

The inspiration quickly led him to create his first scale model image, "Love Car," featuring the red die-cast model of a Fiat 500. The result was a foreboding scene, with the car leaving tracks through freshly fallen snow, a mysterious handprint left on the rear driver-side window. The image went viral and everything changed for the married father of two children.

"I have been doing commercial photography for 10 years, and when I made the first 'Love Car' photo, suddenly, I started receiving requests for interviews and new commercial projects. But for me, this was only the first one. I still had a lot to learn," Hernandez said. "It's been crazy. It changed my life. It's been a lot of fun: traveling, meeting other photographers, working with big brands. I've been learning the process not just of making the photo, but the process of talking with brands, signing contracts, giving quotes — all the stuff you have to do before making the photo."

Sixteen years ago, without much in his pocket and no job, Hernandez moved to Cancun from Mexico City. He told his then-girlfriend, Sarah, that he would get a job and within a year, come back to the city and marry her. After getting a job in Cancun as a graphic designer, he lived up to his promise and married her. The couple now has two children, Santiago, 14, and Mateo, 6.

In his job as a graphic designer, Hernandez had to learn about photography to communicate his ideas. That personal growth led to his idea for the original "Love Car" image. Since then, the Love Car has taken other adventures, including Hernandez's most recent image, where the weathered and beaten toy car sits perched atop a grassy hill at sunset, the mysterious handprint once again present in the rear driver-side window.

Viewing the images Hernandez has created — the Love Car sitting idle in the desert against a star-strewn sky, the Love Car on a frozen tundra as the moon rises behind it — the viewer can't help but wonder what sights this little car has witnessed:

It's hard to tell a story with an inanimate object. To give it life, you need to see it as a character: how you pose it, how it looks, what’s around it. You need to know what you want to tell through that object. It's like directing an actor. You have to direct that object. By taking my time to pose it well and trying to make it believable, it transmits something more to the viewer.

Making the image believable is central to Hernandez's work. Through his work as a graphic designer, he became well aware of the benefits and limitations of Photoshop. As such, he does his best to achieve as much of the final image as possible in camera. He spent countless hours learning advanced modeling techniques to create detailed sets and he has painstakingly weathered the vehicle.

"I love Photoshop, but I wanted to use practical effects. I was just having fun telling and sharing my stories," Hernandez said of his original "Love Car" image. "I realized that if I wanted to keep up with this kind of photography, it's not enough to put a toy on a tabletop. You have to give a personality to that object. It's the main character."

In addition to the modeling aspect, he has honed his photography skills to trick the human eye into believing it's looking at a real car in a real location. Primarily using a Canon 5D Mark III, he uses a Canon TS-E 24mm f/3.5L lens to create the right look. He says he needs only to take three to five shots of the model and scene to create his composites.

Hernandez keeps his scenes simple to reduce pre-production time, and he can make most of his images in about a week. The original "Love Car" image, for example, took about two days. But as he has added new skills and techniques to his repertoire, some images have begun to take longer, with his most recent image taking two weeks to complete. Some images he created for Volkswagen took up to a month.

He has also taken his work out of the studio and into the field, putting his scale-models in actual locations. For example, it's difficult to tell his model of an Audi R8 on the beach against the harsh sun of midday is really just a toy a few inches long, sitting on a tabletop.

"There are different ways to make these images more believable," he said. "The image of the Audi R8 is more believable because it was done on location, not in studio with sky replacement. That's a real sky. On the technical side, I have some tricks to fool the eye and mind. The perception — how our brain perceives scale — can be done with settings in camera. You can achieve the optimal depth of field in camera. The angle, when you're on location, you have to match the horizon of your scene with the real horizon. And, of course, the better the scale model is, the better it looks in the final image."

Be sure to check out Hernandez's website for more! 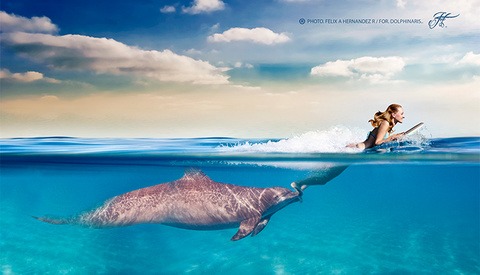 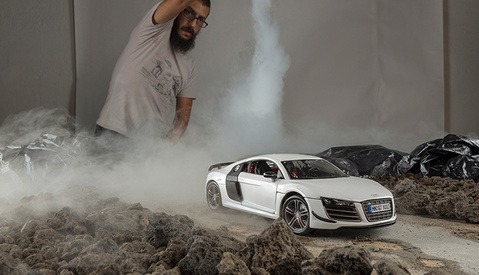 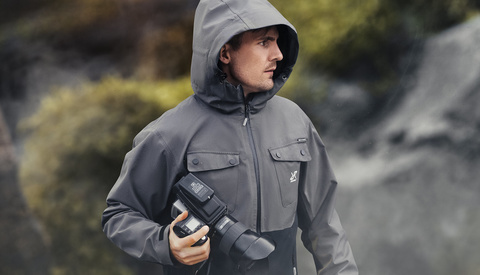 Editorial Photography / October 11, 2019
The Bold and Colorful Fashion Photography of Richard Terborg
Log in or register to post comments
10 Comments

Very lovely work. Great skills and their use.

one of my inspirations!

Felix's work is brilliant and amazing. Wondering if Patrick and Lee will give him his own tutorial series?
:)

Wonderful to see his work in fstoppers

It was great to speak with him about the Love Car and life in general. He's a really interesting and nice guy.