A to Z of Photography: Noise and Helmut Newton

Moving on to N, we enter the second half of the alphabet and with that a headlong rush to Z. It's been a blast getting to this point, but now we start the countdown. In this issue the A to Z of Photography we visit that most unwanted of digital acquaintances, noise, before taking a peek at the cover work (and Polaroids) of Helmut Newton.

A digital sensor reduces to a device that counts the number of photons hitting each individual photosite. They do this by converting the light to electrons and storing the electrical charge (like a solar cell), before transporting it across the chip to an analog-to-digital convertor (ADC) that measures the charge and converts it to a binary number. Noise is any unwanted deviation in the actual number of photons recorded in each pixel when compared to the original photosite. This results in brightness variations in pixel values that can be seen as tonal or color variations in your image, as in this image of a circus performer shot on a dark stage at ISO2200. 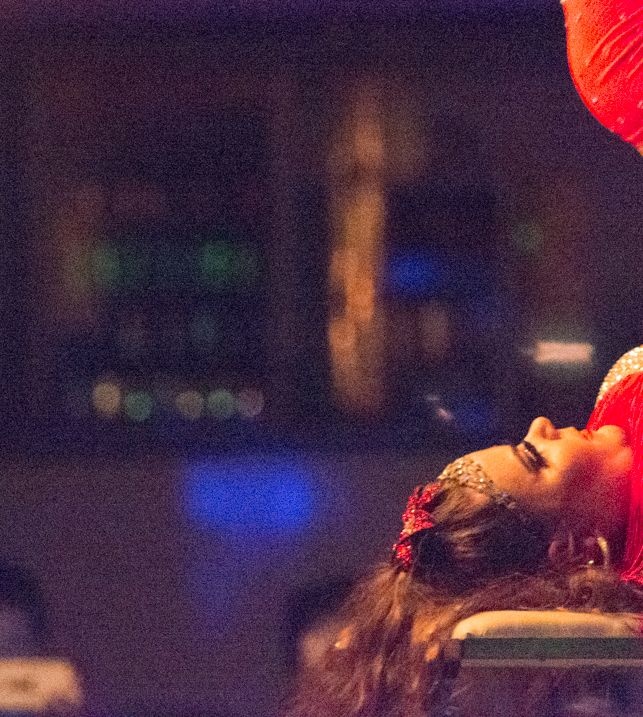 So where does noise come from? There are actually five main sources that can impact any image you acquire.

Of these, two are important to understand as they can significantly degrade your images. The first, Read Noise, is introduced by the ADC. Any analog device is inherently susceptible to variations in performance, unlike the exact reproduction of digital data. Crucially, Read Noise is at a fixed level which means that it makes up a far greater proportion of darker pixels. There is nothing you can do about Read Noise but you can get a good idea of what it looks like by taking a shot with the lens cap on at the highest shutter speed and then viewing this. It is noticeable that sensor manufacturers have significantly improved the quality of their ADCs in recent years and images are much "cleaner".

The second type is Thermal Noise which occurs when electrons are released by a photosite — this grows with exposure time leading to the problem of "hot pixels" loathed by astrophotographers. You can remove it by subtracting a dark image taken with the same exposure time.

The third main type is Shot Noise and has nothing to do with the camera at all. Nature is inherently random and that includes the sun! Whilst it might look like a constantly bright source of light, it also suffers from random fluctuations. As an image is captured over a period of time, no matter how short, there will be natural variations in the incoming light. Unlike Read Noise, this follows a power law which means that at low light levels it makes up a significantly greater proportion of the pixel value than at high light levels. For the technical out there, photon arrival at the sensor is modeled using a Poisson distribution where the standard deviation is calculated as the square root of the mean.

It is this factor that has led to the advice for photographers to Expose to the Right (ETTR). By overexposing your image, without saturating any (or many) pixels, you significantly improve the signal-to-noise (SNR) ratio and can then reduce exposure in post-production.

Finally, there is Quantization Noise where the photon count is converted to the bit-depth of the recording format. Whilst a minor component, it is the reason we see the likes of Phase pushing 16-bit ADCs to give better tonal rendition.

It's beyond the scope of this short introduction, but there are a number of software packages, such as Lightroom, that allow you to reduce the effect of noise. However the best starting point is to understand where it comes from and shoot accordingly!

Helmut Newton, or Helmut Neustadter, grew up in Berlin and was propelled a hugely prolific, and influential, career as a fashion photographer for the likes of Vogue magazine. Born in 1920 to Jewish parents, his family was persecuted by the Nazis and he fled to Singapore in 1938 where he became a photographer. He was subsequently interned and sent to Australia, joining the Australian Army and then becoming a British citizen.

After the war he opened a portrait studio in Melbourne where he garnered a reputation as a fashion photographer that secured a 12 month contract with British Vogue prompting his move to London in 1957, before eventually settling in Paris in 1961 where he shot for Harper's Bazaar and Vogue amongst others.

Perhaps more interesting from the perspective of current photographers is understanding how he developed the vision which we see in the end product. For film photographers this is often shown in their contact sheets (such as the famous Magnum Contact Sheets), however by the pre-digital 1970s many photographers shot polaroids in order to nail the final image. The book Helmut Newton. Polaroids is a collection of the extensive catalog of Newton's Polaroids and they give a great behind-the-scenes view of his shoots.

A heart attack in 1970 reduced his output, but he remained active through the assistance of his wife (also a photographer who worked under the pseudonym of Alice Springs. Yes, seriously!) which led to the high profile projects Big Nudes, Naked and Dress, and Domestic Nudes. He died at the age of 84 from a car accident in Los Angeles, leaving a large portfolio of work now managed by the Helmut Newton Foundation.

Other N's that didn't make the cut in this article include Nadar, negative, Nikon, Nicephore Niepce, Nautilus (image), and the nude.