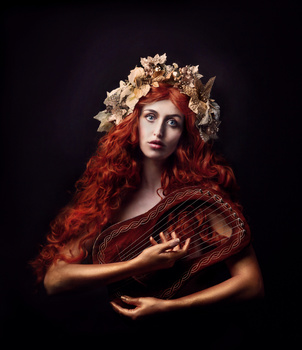 Aoibheall is a famous fairy queen of County Clare, Ireland.
Her name has been translated as "bright", "sparkling", and "beautiful", all things which are generally attributed to goddessess.
Aibheall is said to have a magical golden harp which was only heard by those of Clann UíBriain, whoever heard its music did not live long afterwards. For this reason she has been referred to as "banfháidh Om Briain", meaning "prophetress of Clann UíBriain".
It was that harp Cuchulain heard the time his enemies were gathering against him, and he knew by it that his life was near its end.