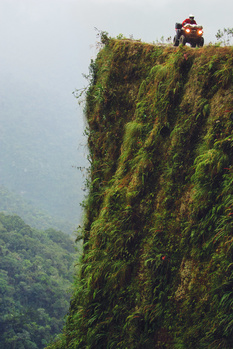 ATV on the Worlds Most Dangerous Road.

Taken while on assignment for a travel story, I got to explore Bolivia's North Yungus Road - better known as 'The Death Road'. It was named as the "world's most dangerous road" in 1995 by the Inter-American Development Bank. An estimated 300 people a year die on this road.

Lots of drunk truck drivers battle on the skinny sections of the route. Special rules apply at North Yungas Road. While the rest of Bolivia drives on the right side, here vehicles drive on the left. A driver on the left has a better view of the edge of the road and I mean the edge. These dudes ride with their wheels just inches from A 2000 foot drop. Gnarly action indeed.

While I didn't see anyone actually die in front of me while doing a story for Transworld Quad Magazine, I did see a small family "sleeping" on the side of the road in weird and awkward positions. No clue how or why they were there. All I know is that they never woke up from their dirt nap.

We started the route in the sweltering heat of the rain forest in the morning and topped out later in the day at 15,400 feet. I have an extreme propensity for altitude sickness. Coming from sea-level to the high alpine within hours had me worried. I tried the local solution to this problem which was chewing on a wad of coca leaves and it surprisingly worked.