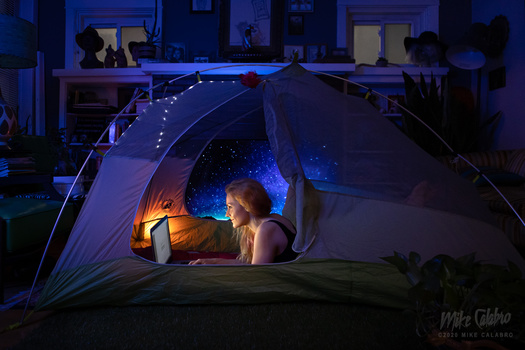 Camping inside during the Corona Virus Pandemic

Promising cure for victims of the pandemic has been found in a living room.

@mophro , a nurse at Loyola University, has spent the last three weeks at home working on a cure for hyperpyrexia cabinosis (cabin fever). She has started a human clinical trial to evaluate the safety and efficacy of a cure by bringing the great outdoors, indoors. "Camping in your living room shows real promise" says @mophro. More research needs to be done before the CDC and the WHO accept the results. Chicago Mayor, @lightfootforchi urges more human subjects to volunteer for the study. Participants can tag @urbancamperphoto and use #urbancamper to take part.

Documenting rigorous clinical research during an outbreak is always a challenge. The limited photographic resources that Mike Calabro ( @urbancamperphoto ) has made this a daunting task. Most of his photo gear was left in a studio a month ago while shooting for a new client. He assures that the entire image was done in camera without any fancy photoshop tricks. "I only have two cheap flashes at home and need a lot more gear" Mike says.

He got creative by using random objects found at home. A 55" TV for the background, seasonal affective disorder light, AstroTurf, a fake LED flame lightbulb, and flashes covered in blue cellophane. The flashes were too bright for a proper exposure. Mike says that he "tapped paper towel over the flashes to reduce the output" and continues "Normally, I would use TP, but we all know that shit (pun intended) is in short supply these days"