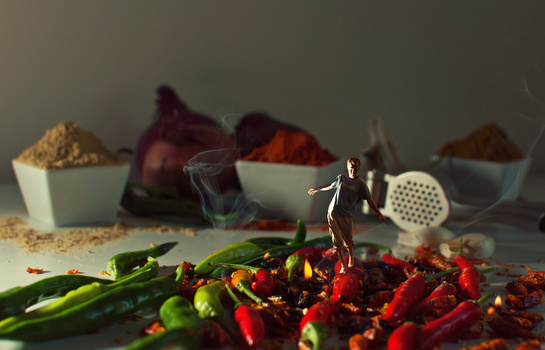 Part of my 'mini-world' series. I decided to grow some chilli this year and was thrilled to see my plants flourish and produce lots of flowers (chilli) I had this idea from the moment I saw them begin to turn red. Excited by how hot they were beginning to look and thats were the idea of creating a fire walker came in. So after some deliberate placing of ingredients on my bedside table, I had the scene set. I used dry chilli's and seeds to create the fire and smoke, I literally sprayed some Aftershave on the chilli's and set them on fire. During their burning I fired off a couple of shots, catching some flames and smoke in the scene. I repeated this step a few times and merged the images together in PS. The shot of myself was taken in my living room with a bare strobe camera left set at 1/128 just for a quick burst of light. on my right hand side. I had a selection of Poses to choose from but went with this 'off balance' one as it seemed to work best.. Nikon D90, 35mm lens for the 'scene' shots. 18-70mm lens used for the portrait shot.