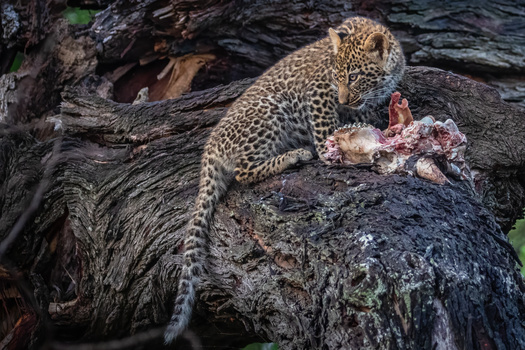 Early November is the photographically ideal time to visit the Serengeti. The beginning of the "small rains" means the sky is clear in the morning, then dramatically clouds up in the mid afternoon, with the expectation of a brief shower or two. Typically, the sky clears again in the later afternoon, and the sky is sparkling clear after the brief rain. We watched a mother leopard kill a wildebeest then drag it the better part of a mile back to her lair in some large isolated rocks. She stashed the wildebeest in a nearby tree, and remained near by while the kill was consumed over the next three days. Our camp was less than 1/4 mile away, which gave us a great opportunity to spend time with the leopard and her cubs.

Early on the third morning, this little cub was literally down to the bare bones. But he was having a great time playing with his trophy. And there is nothing that makes a meal "happy" like playing with the toy!

Robert Henderson
Eye of the Matriarch
0