How to Remove Anything, Even From a Complex Perspective

Some elements of images are easy to remove with a quick use of the clone stamp. Some, however, swiftly become a nightmare as perspectives and light ruin the effect. Here's how to remove anything from an image, even if it's taken at an angle.

Certain skills in Photoshop are little like insurance policies: you often don't think about them or even care to take an interest in them until you need them, by which point it might be too late. In the early days of my photography endeavors I distinctly remember arranging a shoot for a band. We secured a great location and we had a number of ideas. We started shooting and were enjoying the results. Then we took one shot — which became our favorite and ended up being the flagship image — and it wasn't perfect, but in a way we couldn't fix. The problem was that the location had a lot of expensive furnishings that were strictly "do not touch," let alone move. "No worries," said I, "I'll fix it in Photoshop."

Well, fix it I did (although looking back, not perfectly,) but I underestimated that task and then some. The intrusive object was intricate, large, and shot at an angle which meant that it ran through a fair portion of the depth of the frame. The result was that cloning it out in the way I knew how, created almost as many problems as it solved. Hand on heart, I don't recall how I finally got it looking decent to anyone who isn't a retoucher or Photoshop wizard, but I can tell you it wasn't using this far better technique.

Composite / September 24, 2019
How a Photoshop Noob Composited This Series of Action Photos

Removing anything in Photoshop is really really easy. The difficult part isn't removing something, it is re-creating the things that the removed object obscured.

I think that most of the heavy cloning and object removal that needs to be done is practically impossible, even with these Photoshop tools.

I mean, take this image for example (posted below).

Simply removing the out-of-focus tree trunk that cuts across the middle of the frame would be easy ..... but re-creating all of the woodland vegetation behind it would be a freaking nightmare, especially when someone wants the results to be absolutely perfect for a huge wall-mural-sized print.

"Auto Fill" and similar tools are okay at small tasks like your little flower pot on the table, but when you need to do anything kind of major, they just can't keep up with one's needs. There are severe limitations that software developers just haven't overcome yet. 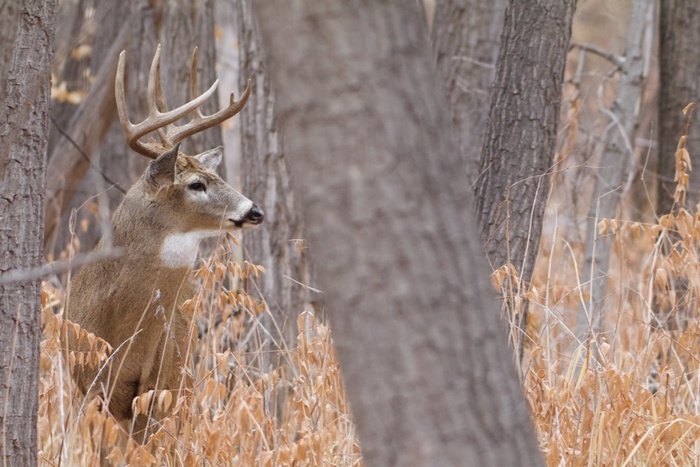 This type of situation is defiantly a difficult, if not impossible one, with the subject to-be-removed taking up so much of the image where critical data is just completely missing from the image. I have several images like this myself; one of the downsides of wildlife in a heavily wooded area.

Depending how much the photographer is a purist, it might be possible to remove the deer and place him back into a similar photo with a cleaner foreground but with similar grasses and focal plane.

I'm just thinking out-loud here of course; but I agree there are defiantly limitations on what can be done with a single image and trying to replace a large object (creating a void in data).

Yeah it was interesting to me that the author referred to that flower pot as being in a "complex perspective". Compared to 90% of the cloning I have to do, that was unbelievably easy.

Removing is easy and it can be done through programs like photodiva our your smartphone's default photo editor, but removing something so that it would look natural is complicated. You are lucky if all you have to remove are the heads of people swimming in the sea behing your model.