Speed Light Comparison: Can You Spot The Differences?

Let’s be honest, there are a lot of advantages to using speed lights. They are light, portable and they run on batteries. Speed light modifiers that accompany them are also usually quite light and portable as well. But speed lights do have their draw backs and they can be a real pain to use when you encounter issues, such as a painfully slow recycle time between flashes and a lot less power then you need on a bright sunny day.  If you have a love hate relationship with speed lights then this article might just have a solution for you.

I challenge you and all the pixel peepers out there to spot the differences between 3 different speed light brands that were used for the test images below. The three speed lights used in this challenge are the Canon 600 EX RT, the Yongnuo YN 560 and the Cactus RF-60. Can you spot the subtle differences between these three speed lights? Before you begin, take a quick mental note of your choices and make sure you keep track of your results.

What speed light do you think was used to create the image below? 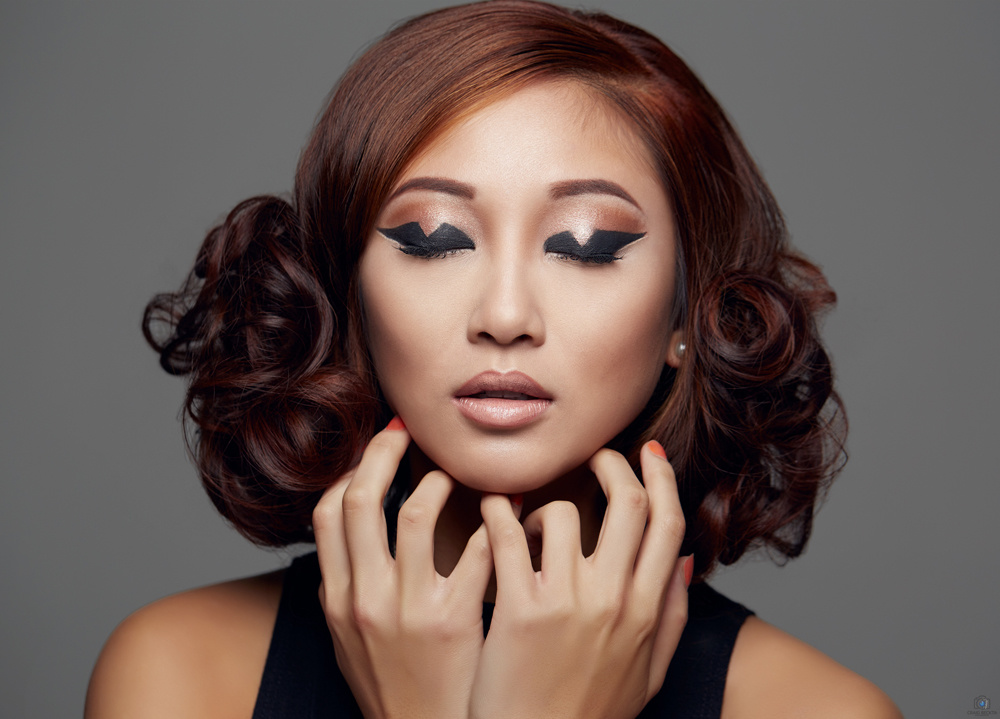 If you guessed the Canon 600 EX RT the most expensive speed light tested in this challenge then you are wrong, the image above was taken with the Cactus RF-60.

How about the image below… What speed light brand do you think was used to create this image? 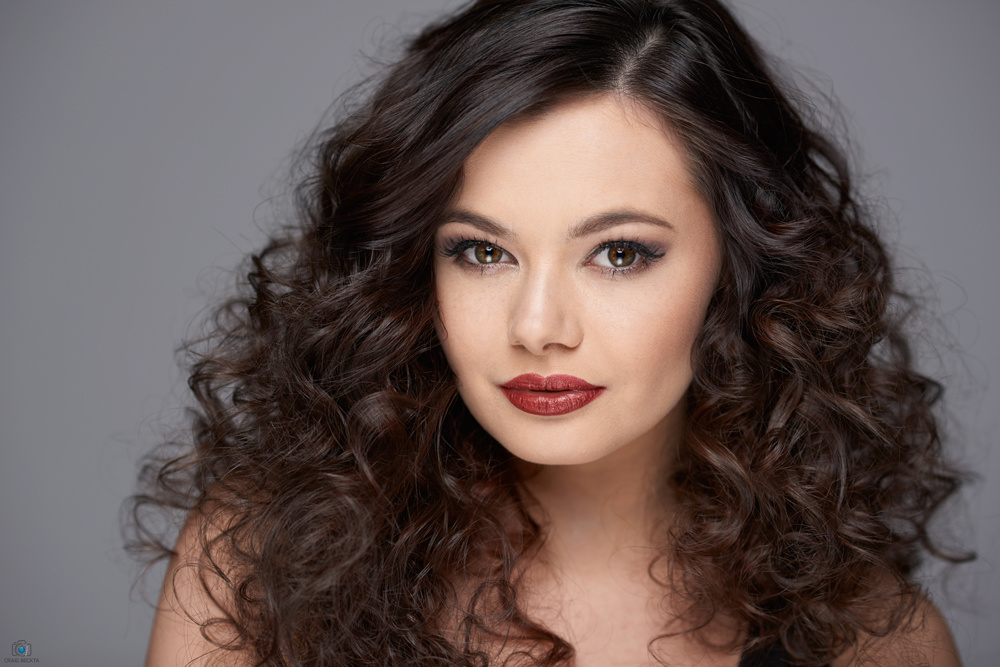 The speed light used for this image was the Yongnuo 560. Are you surprised at the results that you can get from the lower priced speed lights? Through this comparison I realized it is more about how you modify the light and I will get to what light modifier we used in this speed light shootout shortly.

How about the image below? What’s your guess? 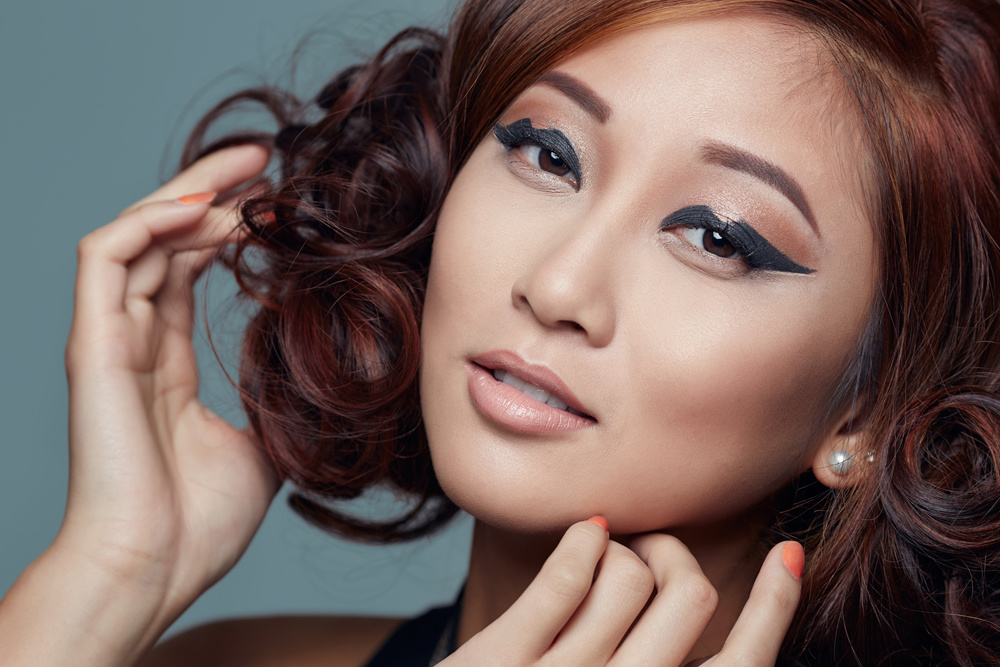 Nope, it’s the Cactus RF-60 again. One thing I discovered during this comparison was that the color temperature from each speed light brand was slightly different. But if you shoot in raw and you use an Xrite Color Checker Passport or a Spyder Color Checkr Target you can easily adjust for the differences in Capture One Pro 8 or Adobe Camera Raw.

What’s your guess for the last image? 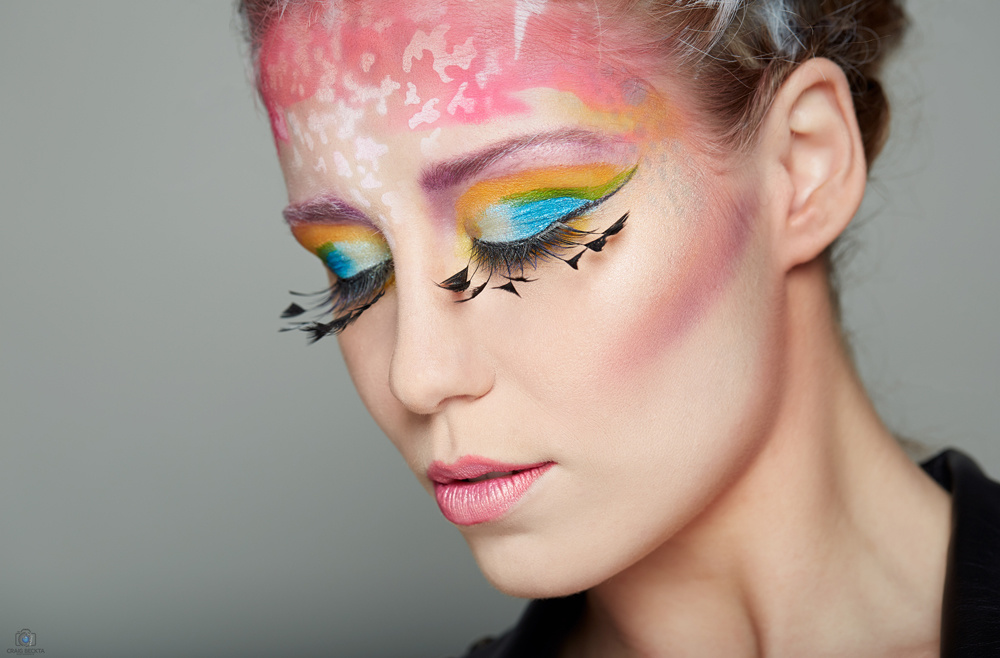 The differences you will find with higher priced speed lights are in most cases a better build quality and additional features that you won’t find in the lower priced counter parts.

Check out the Behind The Scenes Video below where I take you behind the Velvet Rope and reveal my lighting set up and exactly how the images in this article were created in the studio.

As you could see from the video above I used the 32 inch Westcott Rapid Box Duo with a number of different speed lights in the studio. Just to recap, the gear I used in the video starting with the stand was the Avenger C stand with the D-600 Boom Arm and a Baby Drop Down Pin.

Although the C stand isn’t the cheapest option on the market, if you shoot in the Butterfly Lighting position or the Clam Shell lighting configuration a Avenger C-stand with a Boom Arm and a drop down pin will make your life a whole lot easier. This set up is a life safer, You will no longer have to struggle with heavy modifiers rotating out of position.

Now let’s have a closer look at some of the features of the 32 Westcott Rapid Box Duo. It comes with a Silver interior with an inner and outer baffle. You can use it for head shots or small groups and the tiling bracket makes it easy to adjust. You can also use it as a Beauty Dish with the optional deflector plate installed. Note the deflector plate is an optional accessory and it does not come included with the Rapid Box Duo. 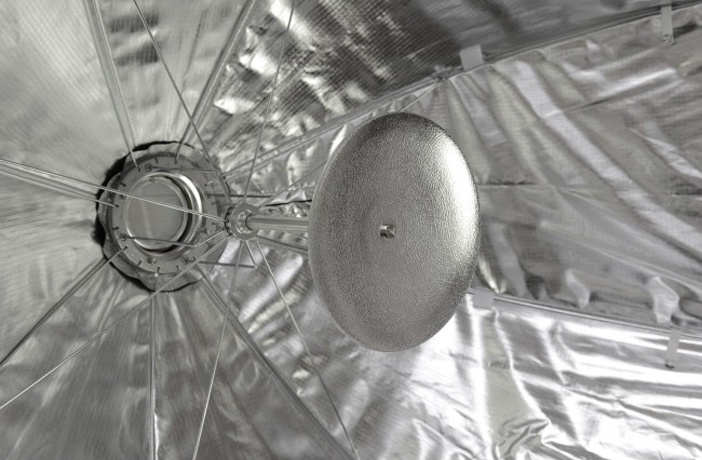 You can also use the Westcott Rapid Box Duo with a optional 40 degree Egg Crate Grid for more control of your light in situations where you want to restrict the spread of the light. Grid’s are handy in cramped quarters or when you just want more control. 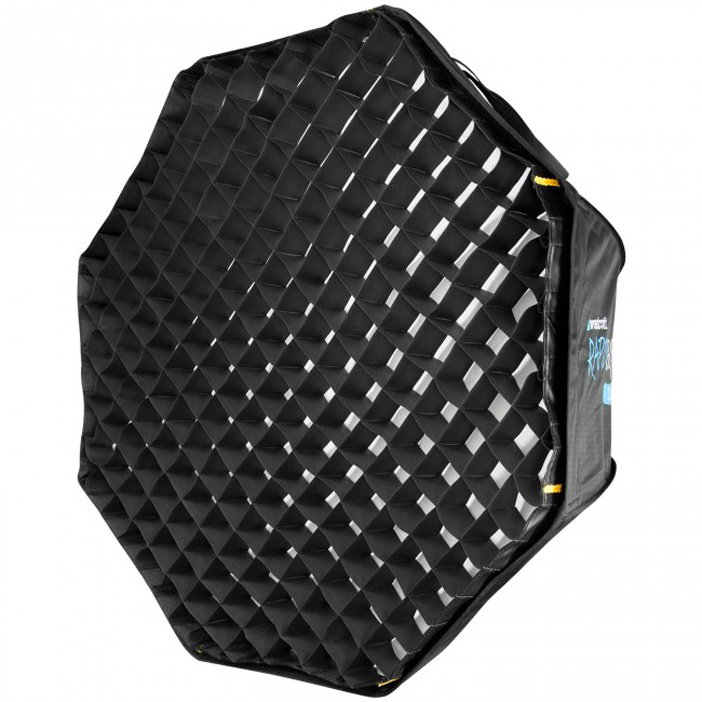 Here’s a closer look at the inner baffle and you can use the Rapid Box Duo in this configuration for a more specular highlight with a diffused center. When it comes to speed light modifiers this is one of the most versatile options I've used. 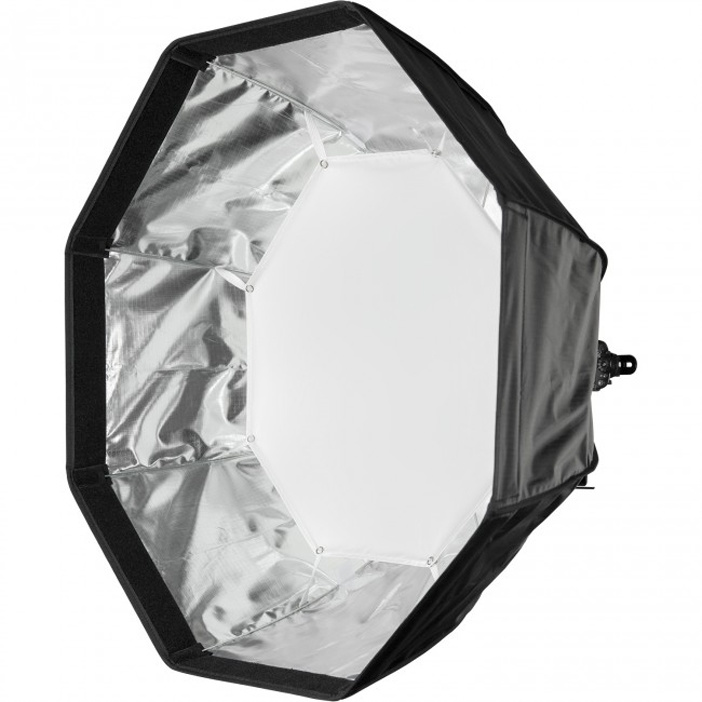 For the ultimate softness and a smoother spread of light you can use it with both diffusion panels installed. Also, The dual speed light cold shoe mounting bracket with the Westcott Rapid Box Duo will change the way you use speed lights in your daily work flow. 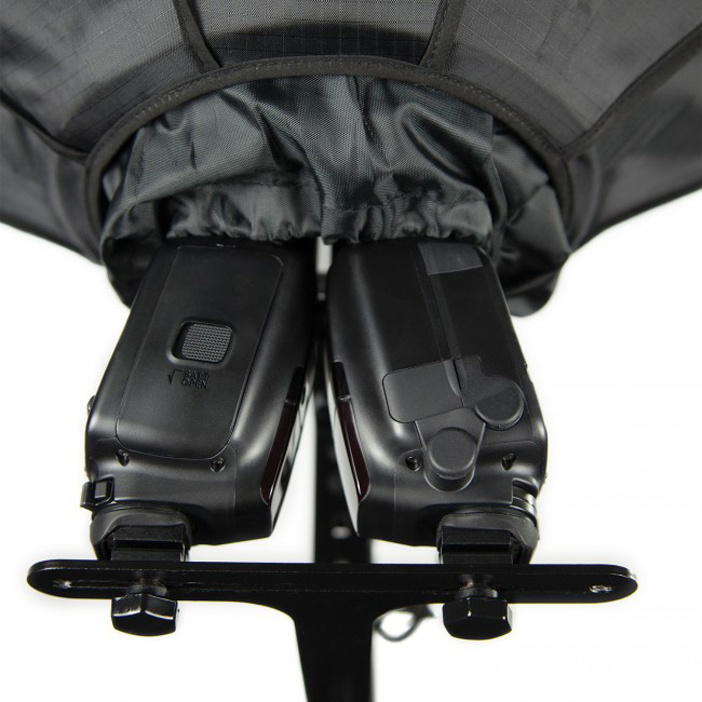 You are already probably starting to see the obstacles the Westcott Rapid Box Duo will help you to overcome. Not to mention the amount of different options available and the quality of light it provides.  Overall it overcomes a lot of the challenges inherent with the design of small portable speed lights by increasing the size of the light source and allowing you to use up to two speed lights for more power. Sure, I know some of you probably think it is too expensive, and I wish it was more affordable myself.  It would be nice if the Grid and the Deflector plate came as standard equipment but it seems to be a trend other manufactures are also following.

Thanks for taking the time to read this article, you can find out more about me over at my website Craig Beckta Photography and you can also connect with me on Facebook.

Let me know your thoughts on the speed light comparison, were there any surprises for you? Just leave a comment down below. 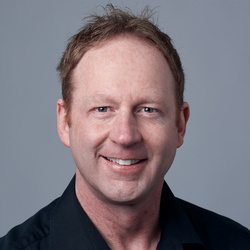 Editorial Photography / October 3, 2014
UPDATED: I Took Photographs of Two Dudes Kissing, and It Was Beautiful

Yeah, the lighting equipment dosen't matter when you add something infront of it. Could pretty much had stuck up a construction light and it would have similar result.

I'd say revisit this comparison with bare bulb examples, and even then, we're really only comparing nuanced differences in color temperature and consistency.

I really don't know what this was accomplishing? The light will always look differently when a modifier is attached to it. There is really no "comparison" going on here... Unless you had very precise color temperature measuring tools. But even then, the difference is next to nothing... If you wanted a "comparison" I would have used tungsten constant lights compared to flash.

Guest article? Zero spellcheck and proofing? It would have made more sense to show how a cheap flash with a modifier can perform better than an expensive one with no modifier, to demonstrate that you don't need to spend a lot for good results.

I think, the point was the fact, that speedlights flash only to the front, but bare bulbs, studio flashes will do it all around. (with some differents of course, depending on brand)

I'd really like to see the unedited differences in color... I own the 600ex and have used the Yn560iii and the color shift was very pretty big to my eyes... But I know that yonguo is not known for consistency.

I have been tempted to borrow the yonguo set again and do a full side by side comparison again...just need to set aside the time.

A free Wescott ad from a "Wescott Pro", similar to the endless free Profoto ads. Content marketing with minimal content. Basic disclosure would be nice, and should be required.

I've never seen anyone specifically mention "quality of image" as being a reason to pick one speedlight over another. Colour consistency, yes; but your supplied images can't really be used to test that. Reliability, too; but that is often subjective and hard to prove one way or another. Maybe I'm missing the niche this post is filling, but at anything more than the briefest of glances it does appear to be a Westcott ad. I'm sure calling this a Westcott review wouldn't be out of place or unwelcomed, so why not just do that?

Well written article and nice photos Craig!
I have a love-hate relationship with speedlights and artificial lighting for portraiture.
I don't like having light spots on my model's face/body, and judging by your work you don't like that too.
Very good job at diffusing the light from the speedlights and eliminating the center spot :)

In the end, does the CLIENT care? Sorry, but I don't understand what you're trying to get across for a point here, aside from the fact that Westcott have got a new toy that can fit two speedlites inside.

When you compare brands, of course there will be color temperature shifts between each light, and when you go and correct them there's nothing to really guess at. What's really at issue here is that if you buy 3 Canon speedlites, you should have consistent color temperature from flash to flash. The tolerances on the Yongnuo and Cactus gear just aren't that good, and using three of those can result in having, for example, an unwanted blue kicker light, or an orange rim depending on your lighting setup.

You also buy brand name because it's pro gear, it will take abuse and last a long time.

Thank you Cactus, a manual light with HSS. Great article Craig. To everyone else, if you can't say something nice.

Thanks for the comparisons. The article didn't go into how each light performed, it seems. I'd be most interested in power and recycling times. That said, I never knew that the Baby Drop Pin existed. Have wanted something like this for ages, so I'm very grateful for this piece. Checking out the price on the Westcott grid, though.... ouch!!

I've ordered a BDP from B&H. I've already got an Avenger boom arm. Hoping the model number is inconsequential as I don't know which one I have, exactly. BTW, love the quality of light on the Asian model holding her hands under her jaw.

I know the guide number of the "off brands" is quite a bit lower too.