The night sky is pretty beautiful right now, but in the future, when Andromeda and the Milky Way collide, it's going to be spectacular.

By measuring the movements of stars within the galaxies, scientists have been able to model the future collision of Andromeda and the Milky Way. Though we'll have long shuffled off this mortal coil by then, those who are around will see some astounding views. Shown below is NASA's projection of the view from 25,000 light-years from the center of the Milky Way. The view on Earth may differ depending on how the collision affects the sun's orbit, something we cannot project at the point. 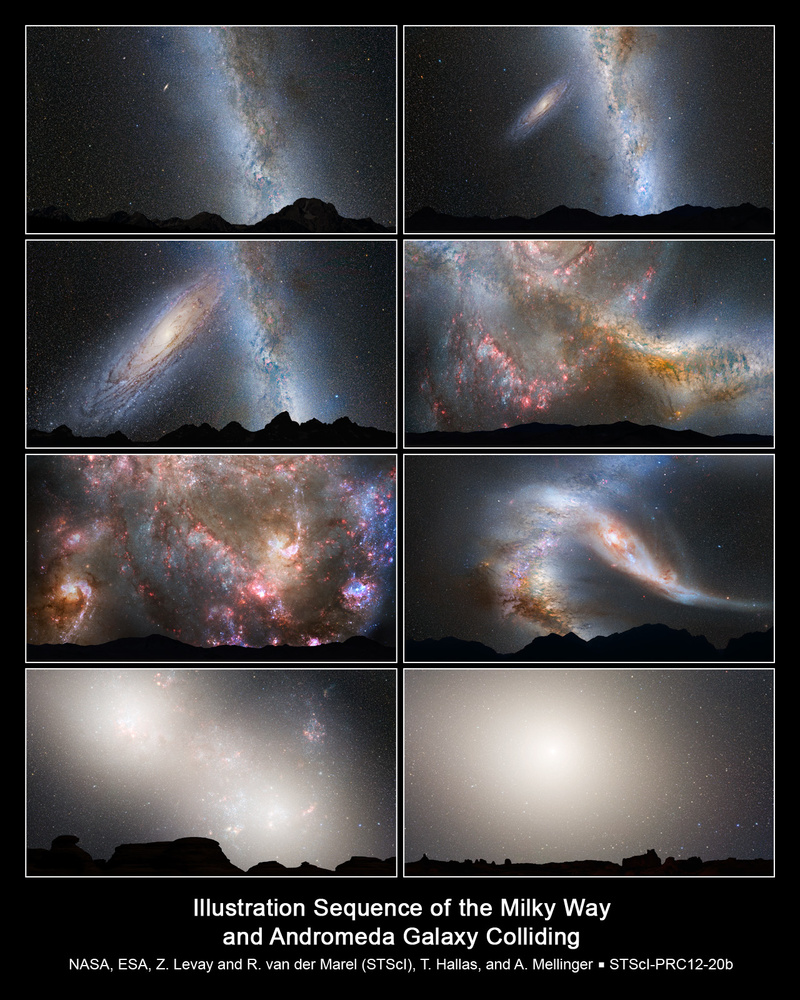 In the top row, we see the present day, followed by the view in 2 billion years, as Andromeda is markedly closer. By 3.75 billion years, the Milky Way begins to noticeably bend under the gravitational influence of Andromeda. In the fourth and fifth images (3.85-3.89 billion years), we see an absolutely astounding sight, as new stars begin forming at a breakneck pace. At 4 billion years (sixth image), the galaxies have passed by one another, leaving the Milky Way unrecognizable from its current form. Finally, in the last two images (5.1 billion and 7 billion years), the galaxies circle back and collide, forming one super-galaxy, the core's light overpowering the night sky. As the previous collision's star-forming processes used up the majority of the interstellar dust and gas, there are no nebulae to be seen. It should be quite the show.

Unfortunately I doubt the human race will still exist..... Especially since the Sun is expected to swallow up the Earth around this same time.

I think it's essentially impossible that the expansion of the sun will be what ends mankind. In the next million years, likely even thousand years, we will either wipe ourselves out OR be populating other solar systems.

So of course if "we" do make it out of this solar system, I imagine the astrophotography community will have captured many sights even significantly more impressive than those pictured in this post :)

Will I have to worry about the Y5B Problem?
http://www.y5b.com/