The Magic of Ken Yu's Polaroids

There’s something magical about watching a Polaroid coming to life in your hands. The little piece of instant film is a moment of captured time that is always a joy to have, but there is something about the scope of Ken Yu’s Polaroid Project that makes it truly special.

Unfortunately for Ken Yu, he picked up his first Polaroid camera right around the time Polaroid announced the discontinuation of their instant film. Luckily for the rest of us, Impossible Project (who became Polaroid Originals and now Polaroid) decided to keep the brand alive. They bought the production equipment from Polaroid for a cool $3.1 million in 2008 and the brand and intellectual property in 2017. If they hadn’t, we might not have access to the magic of Ken Yu’s Polaroid collection.

Ken Yu is a photographer, digital tech, and assistant in the US and UK who has become known for his Polaroids. It all started the day he brought his model One600 to set to capture some BTS and portraits with cool props and backdrops. The crew was so pleased with the shots that Yu started bringing the camera with him to jobs and then to gatherings like PPE and WPPI.

At any given time during a gathering, Yu might be found snagging unwary photographers and capturing their likeness against a blank wall, adding their photos to his growing collection alongside such luminaries as Dan Winters, Joe McNalley, Joey Lawrence, and Peter Yang. In fact, if you’re lucky enough to meet Yu and have your image added to his hoard, you might see photographers changing their Facebook profile photo to his Polaroids after he releases the digital versions.

In a way, getting to see Yu’s Polaroids every year has become almost like viewing an industry yearbook, with Yu the de facto yearbook photographer, capturing photos with his characteristic modesty and humor.

What makes Yu’s images so special isn’t in lighting, or posing, or any other photographic technique. It isn’t in a few special images, or famous people, or incredible locations. The power of his body of work is in its scope and unpretentious approach. A few instant Polaroids at a party makes for a bit of fun, but Yu has amassed thousands of photographs. When a collection grows to that size, it becomes something of a tapestry. Hundreds of photographs join together like daubs of paint to create a story that’s greater than the sum of its parts. The breadth, diversity, and individuality of the photographic community are on display with the kind of immediacy only instant film is capable of.

Beyond scope alone is the way Yu approaches taking the photographs. He doesn’t coach anyone. He doesn’t ask them to pose. He rarely even explains what he wants aside from raising the camera and offering a sly smile. What he captures are his subject’s honest emotions at the moment. Some images show people who are feeling awkward or nonplussed, some excited to be participating in what has become almost a ritual, and others who have been through the experience before and offer comfortable, knowing smiles. Seeing the individual photographs, there is something of unflinching honesty in them. No one looks the best they’ve ever looked, they’re not posing to flatter themselves, and there are no clever light tricks. The viewer sees people simply being themselves in a moment of meta-awareness, photographers, and other community members being photographed without most of the trappings of the trade. Each image is singular, some with the unique imperfections of instant printing, and others with signatures or playful doodles accompanying the portraits.

Unsurprisingly, the Polaroids have become a kind of word of mouth advertising for Yu. Often, people will have heard of “that guy who takes Polaroids” without ever hearing his name. While he has no current plan for exhibiting or publication, one can’t help but feel the scope of his project makes perfect fodder for a wider audience and a wonderful example of why the instant film is so valuable. If you want to see more of Yu’s Polaroid project, you can check out Aperture7Photo on Instagram.

All images shared with permission of Ken Yu. 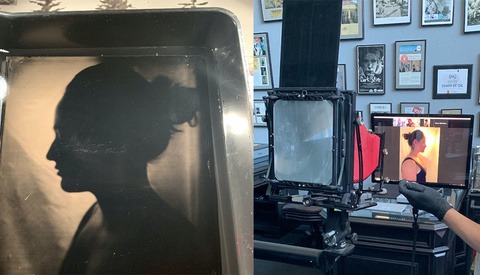 Pictures / April 19, 2020
Here's How a Photographer Took a Wet Plate Portrait Over a Live Video Chat
Log in or register to post comments
6 Comments

Thank you! Me, too. And he has SO many more, lol

Ken's polaroids are indeed super fun to look through!!

Is that Sue Bryce in one of the polaroids?

Ken's a legend!! So glad you made a post about this Nicole :)