This is the kind of story that just boggles my mind. IBM just released a Guinness World Record-setting movie called "A Boy and His Atom," made by moving atoms using an IBM-invented scanning tunneling microscope. It weighs two tons, operates at a temperature of negative 268 degrees Celsius and magnifies the atomic surface over 100 million times. IBM researchers used the microscope to control a super-sharp needle along a copper surface to “feel” atoms. Only 1 nanometer away from the surface, which is a billionth of a meter in distance, the needle can physically attract atoms and molecules on the surface and thus pull them to a precisely specified location on the surface. The moving atom makes a unique sound that is critical feedback in determining how many positions it’s actually moved.

As the movie was being created, the scientists rendered still images of the individually arranged atoms, resulting in 242 single frames. 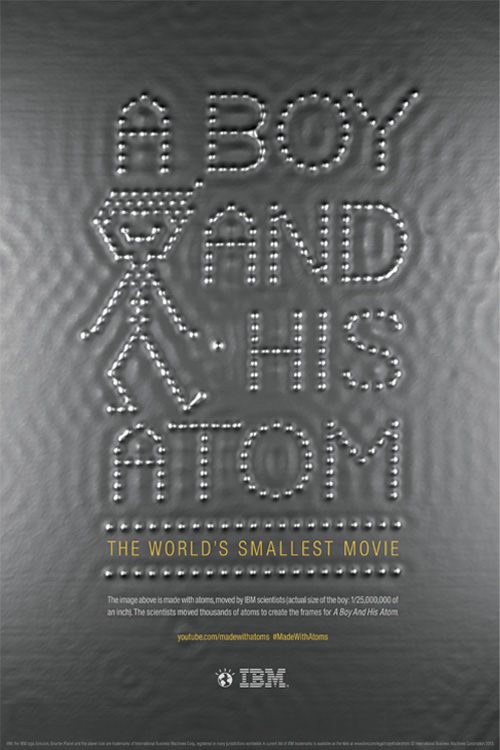 Why? Here is what IBM is saying on that matter:

"Developing the world’s smallest movie is not entirely new ground for IBM. For decades, scientists at IBM Research have studied materials at the nanoscale to explore the limits of data storage, among other things.

As computer circuits shrink toward atomic dimensions -- which they have for decades in accordance with Moore's Law -- chip designers are running into physical limitations using traditional techniques. The exploration of unconventional methods of magnetism and the properties of atoms on well-controlled surfaces allows IBM scientists to identify entirely new computing paths.

Using the smallest object available for engineering data storage devices - single atoms - the same team of IBM researchers who made this movie also recently created the world's smallest magnetic bit. They were the first to answer the question of how many atoms it takes to reliably store one bit of magnetic information: 12. By comparison, it takes roughly 1 million atoms to store a bit of data on a modern computer or electronic device. If commercialized, this atomic memory could one day store all of the movies ever made in a device the size of a fingernail."

You can check out behind the scenes images (and other sweet IBM stuff) at the IBM Flickr Photostream.

I'm kind of hoping that's why there are so few comments. It's just too much for brains to process haha

comments and likes don't really mater. Actually, this site could do without the comment section most of the time and you could measure the traffic with other means... ;)

You humans will eventually be able to make and do anything. We only hope you guys don't blow up or enslave each other.

This is probably a dumb question, but if they are filming individual atoms what is the empty space...a vacuum with nothing behind it? I guess going that macro would make DOF pretty shallow...

Vaccum means a lack of pressure and doesn't interfere here...

As for what is in between atoms, i'll leave the physicist here (if any) answer...

But i suspect that even they don't have an answer to that one! ;)

if you took all those atoms used and threw them in a controlled manner across a space 1 atom at a time, and have them land in the exact pattern ( say across the desk ) would that be considered a crude 1st generation transporter?