You may have seen some of the hoopla over the Insta 360 Sphere. It's a 360-degree camera that mounts on two popular drones, the DJI Air 2S and its predecessor, the Air2. So, what is it exactly?

It's two cameras, each with a 180-degree field of view, that are mounted so that your drone really isn't visible. That's done with automatic blending of the two halves, and when you see it, you'll be scratching your head at the magic that lets it work. 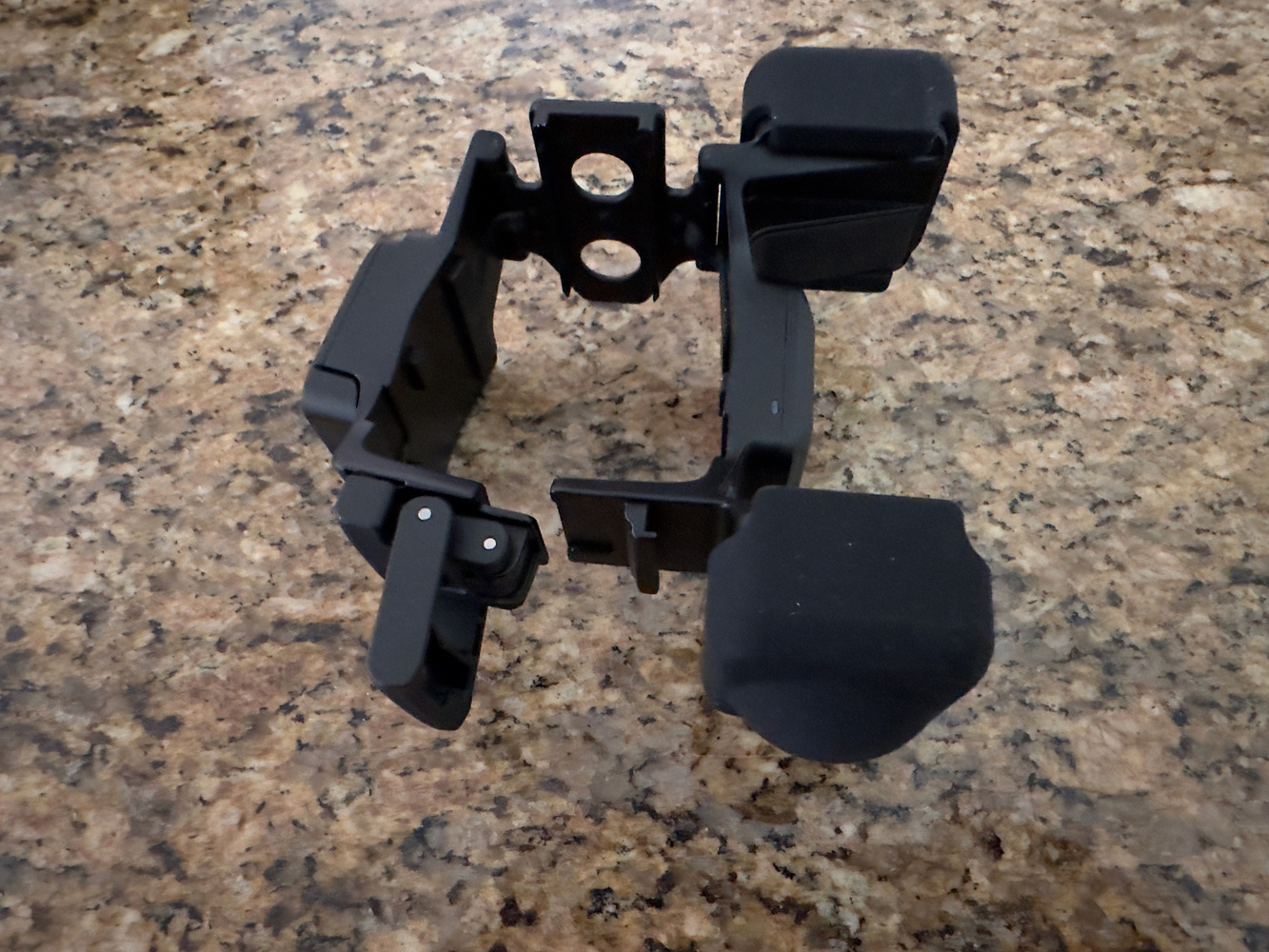 If you get this product, you'll have to readjust your thinking and flight planning. Instead of aiming your drone and camera as all drone pilots learn to do, things are really different with the Insta360 Sphere. You basically fly a straight line. You download their editor (Mac, PC, Android, iOS), and since the camera captures everything in a 360-degree view, you use the editor to move the camera view after the fact, pointing up, down, side to side, straight ahead, or behind you, and all the options in between. The camera captures video at a maximum of 5.7K at 30, 25 and 24 fps. It can also capture stills at 6,080 x 3,040, and it can export them to a Mac or PC as DNG files.

Here's a demo video from the Insta360 folks:

How Do You Put These Cameras on Your Drone?

It's easier than I would have imagined. First, you put in a microSD card in the camera frame and make sure the device is charged up. It charges with a USB-C connector. Little green LEDs tell you when it is fully charged. 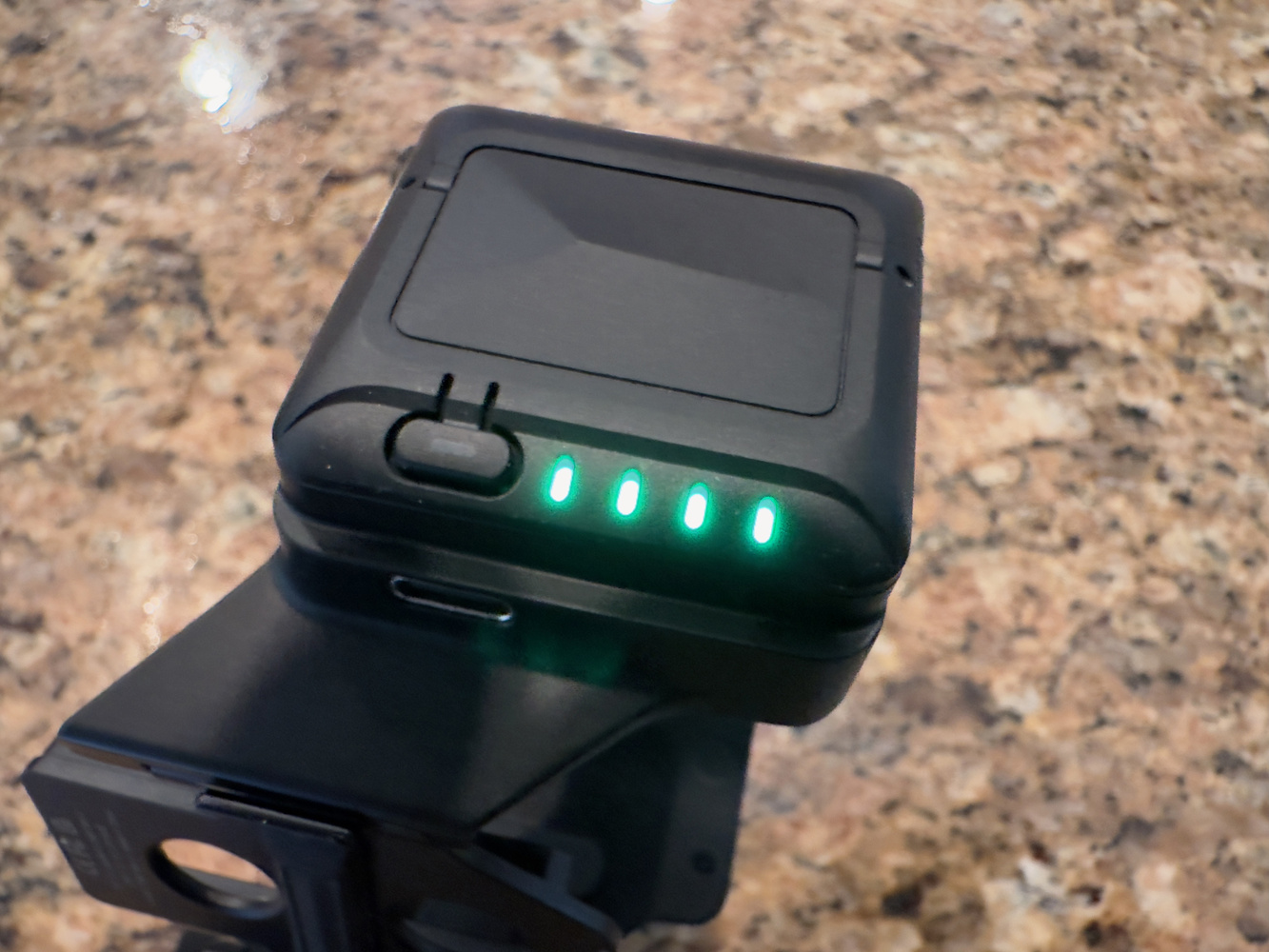 The folks at Insta360 suggest you get the drone and controller turned on first when you are getting ready to fly, as the camera frame can block the GPS satellites. Then, you mount the unit on your drone, and it's a perfect fit, with openings so none of your sensors get covered. On my Air 2S, there's even a space for the landing light to shine through. You can see how well it lines up. 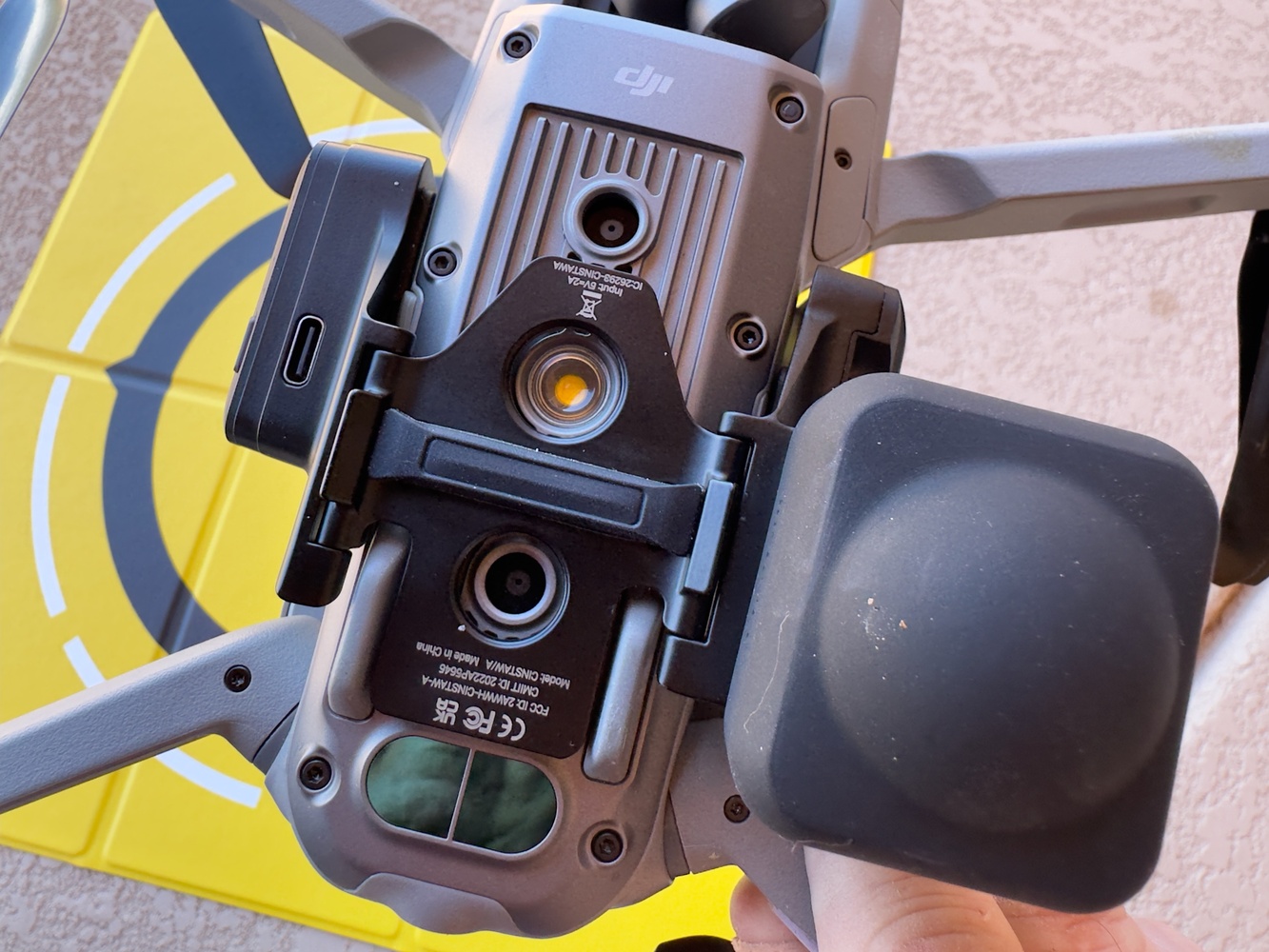 Because of the awkward but required design, the lower 180-degree camera extends beyond the drone landing legs, so you're advised to make sure you land on a mat to not scratch the lenses. Lenses + sand = much unhappiness. 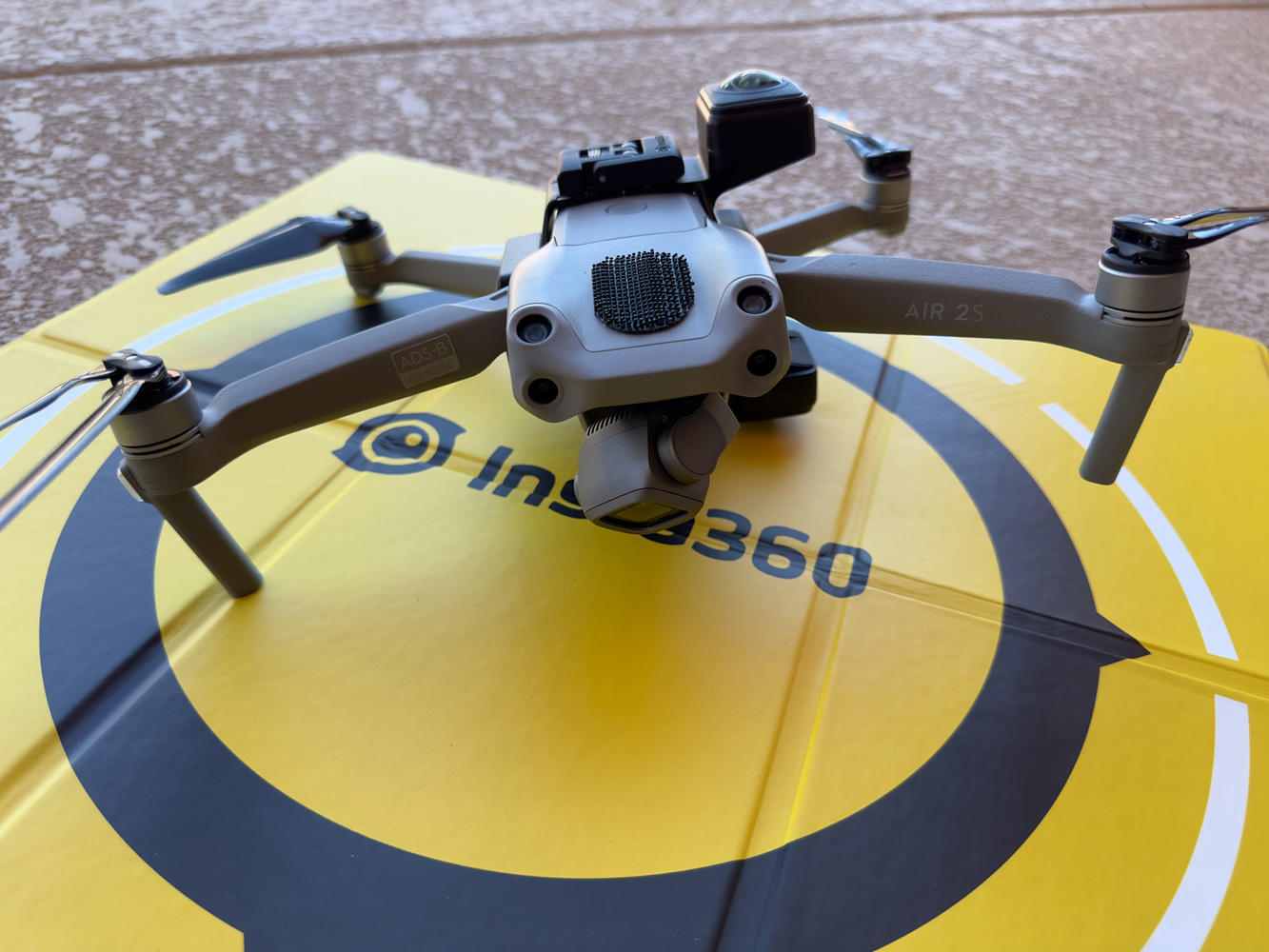 The Insta360 Sphere sits a bit unevenly, as you can see, but takes off and lands fine. The kit includes a nicely made, folding landing pad. It also comes with lens covers to protect the lenses from damage when not in use.

The camera mount is one piece with a clasp that locks everything up. When the Sphere is attached, as mentioned, you take off as usual. The clasp looks fit for duty. It's not going to fall off. 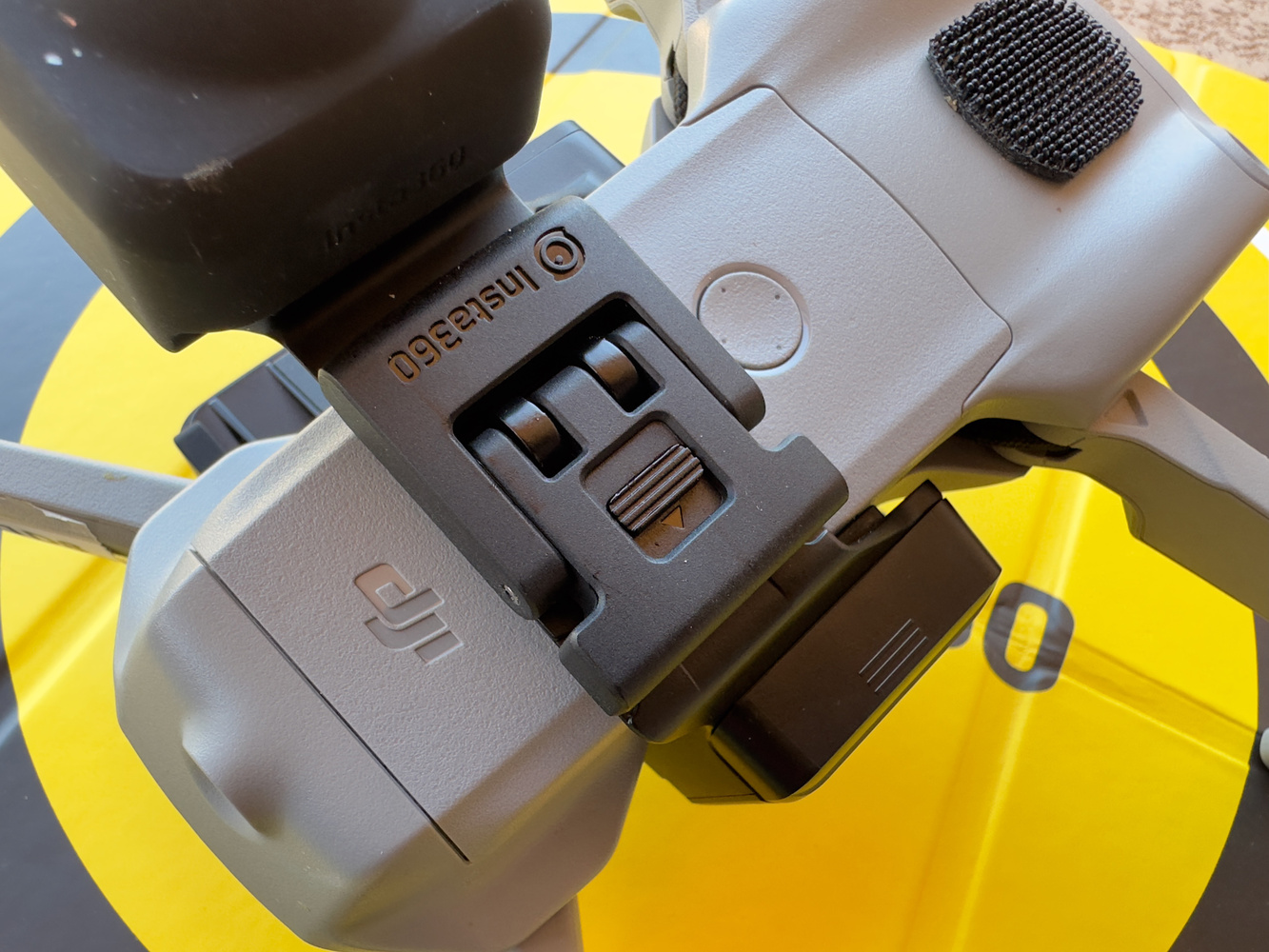 Up in the Air With the Sphere

Despite the rig's uneven stance on the ground, I thought it flew well. I had winds at 11 mph, gusting to 15 mph, and had a few bumps. My DJI Fly software showed I dropped a few satellites when I put the Sphere on the drone, but when I was up in the air, I got them back. I did as recommended and flew a straight line in the Arizona mountains. Then, I turned around and came back. I wasn't up more than 15 minutes, but expect the extra weight to have some impact on battery, maybe 25-30 percent. When the flight was over, I unhooked the Sphere, turned off the recording switch, and then turned off the power to the cameras. It looks like the Sphere batteries will last about 40 minutes.

I was anxious to see what I had captured, so I popped the card in my computer and transferred the video file. The company provides free editing software for PC, Mac, and mobile devices called Insta360 Studio, so I tried it on my Mac Studio with Apple Silicon. 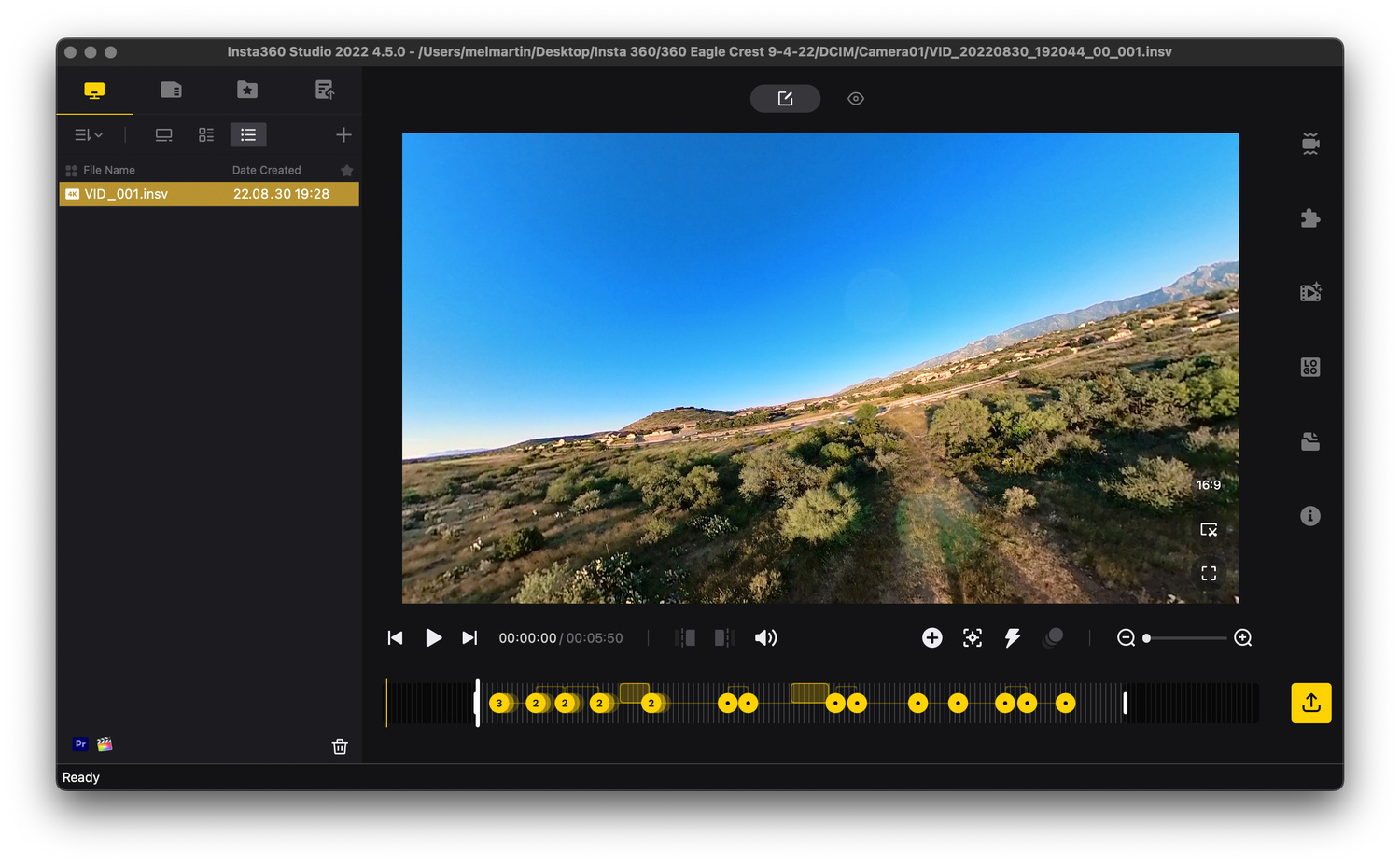 All the screen controls are labelled when you hover over them, and editing was really pretty intuitive. With your mouse, you drag the camera view where you want it to be after selecting a keyframe. There are also one-click effects like Tiny Planet or a kind of snow globe effect. You are free to rotate the view, even 360 degrees horizontally, or do what looks like a barrel roll even though the drone never flips over. 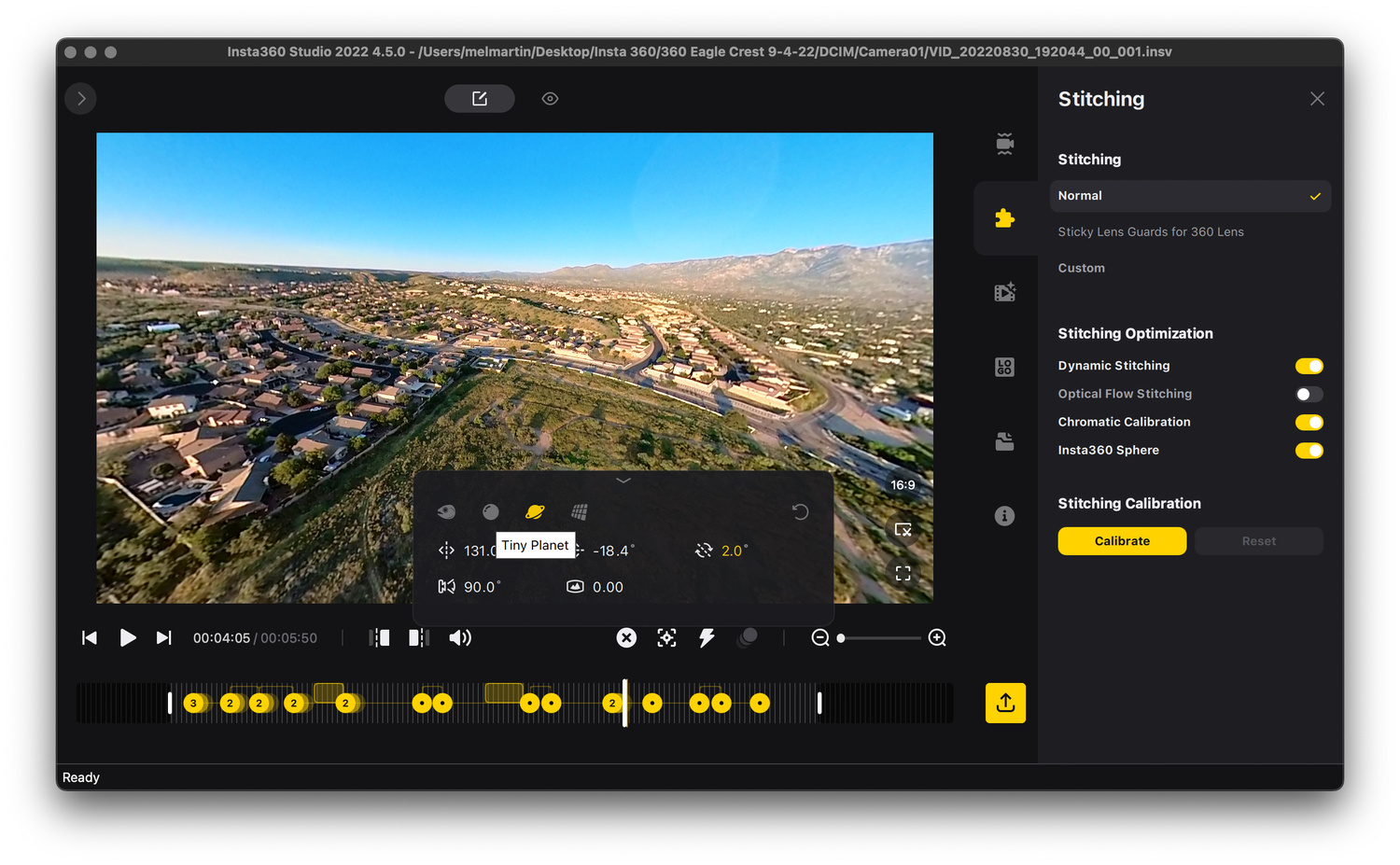 Select a keyframe, then click on an effect. You can drag a start point and an end point, but you can't do cuts or dissolves. For my demo video, I dragged the MP4 video into Final Cut Pro and did those. Although you can shoot in 5.7K or 4K, I uploaded my video in 1080p to keep it small.

You can also output a still from your video. And you can create a 360 video so Facebook and some other video playback sites can let users actually manipulate your Sphere video and look anywhere they want.

What I Think of the Insta360 Sphere

I like the product. It's fun to fly and like getting a new drone. I didn't try a lot of fancy moves, not wanting to wreck Insta360s loaner, and while editing is easy, I didn't get too fancy except for a few simple but flashy effects. Here's my result:

You can see the full potential of the Sphere on this company-provided slick video.

There are a few negatives. Since the drone sees a 360-degree view, you can't get rid of the sun, and it can leave some glare artifacts 180 degrees from its position. Also, while your normal drone camera is on a gimbal, the Sphere is not, and I did get some bumpy video. Better to fly in light winds. Sometimes, the stitching between the top-facing camera and the bottom camera is a little glitchy, but in the larger scheme of things, it feels really odd to be flying a drone with a 360-degree camera and never see the drone. But you don't, and it all works quite well. People will wonder where your drone went.

If you finish your video in another editor like FCP or Premiere, there are methods to smooth out the video and make cuts or dissolves. Also, the Insta360 Editor has plugins for Premiere and FCP, so obviously, they expect you to use a finishing editor.

Who Will Want the Insta360 Sphere?

Well, it's certainly addictive. And can give you a sense of freedom when you can make editing decisions on the ground instead of in the air. I think it might be great for realtors or pros covering sporting events. And of course, your normal drone camera still works, so you can take video or stills with that camera while the Sphere is running.

If I owned one, I would not be using it all the time, as most of my work is still photography, but I really loved this thing as a change of pace. Other people will love the video capability, and I think it has merit as a recreational activity. Some pros will find uses for it too. At $408, it seems quite reasonable for what it does, and especially if you are into video, it's like getting a new drone. I want one.

Very interesting. The slick animations in their promo look awesome.

Fantastic idea but EXTREMELY UNSAFE TO FLY WITH. Yes that needed capitals as it truly is.
You've been loaned the item for a biased review.
The sphere knock out most of the GPS satellites and makes it extremely unsafe to fly with. I know this because I bought one but got it returned.
My air2s went from 26 satellites locked to around 8 or 9 when the sphere is on and recording. Doesn't matter how you set it up, still loses most GPS.
The stability in flying is awful, it drifts like crazy due to lack of GPS and that's only in a 3moh wind.
The noise .... Omg. It sounds like 3 drones taking off with it on. At 200m I can't hear the air2s but with the sphere on you can clearly hear it 300+m away.
Their editing software is appalling for exporting on any platform. Yes it records in what it thinks it 5.4k but it's a fake output. It's closer to 720p at best on output for a flat video, you can up the settings to 4k but makes no difference at all to the output.
With a 360 output. It does look a little better but my 1080p camera from 2010 has better quality.

That's the problem with these reviews. They are all biased and fake as the reviewers are either paid for the item or got it free with a "good review"

That wasn't my experience. In southern Arizona I had plenty of satellites and had no problems with stability. It looks pretty wonky on takeoff and landing but I found it worked. My 'biases' are based on how any product performs and it's value for money. I don't mind writing a negative review at all. I've written plenty of them, and with all things I review I find both positive and negative. A little cynicism and skepticism is a good trait, but you seem to apply it universally where it doesn't fit. Thanks anyway for your comments.