Affectionately known as the Land of Fire and Ice, Iceland has become a widely popular photography hotspot. It seems like everywhere you turn, there are photographers and videographers talking, fantasizing, planning, and shooting all things Iceland. But what's with all the fuss? For those who have yet to pack their photo gear and travel to the island, the recently released short film, "Ice and Fire," shows what you are missing and continues to kindle Iceland's "photo rush."

"Ice and Fire" is a non-narrative project that beautifully documents the natural splendor of the Nordic nation. Shot by Kristian Kettner and Bjarke Hvorslev, the aerial footage was captured over a six-day trip to the North Atlantic. Pairing a DJI Phantom 4 drone with a Sony a7R II, the duo was able to film coastlines, canyons, ice caps, and waterfalls. Corresponding to the film's title, the footage focuses more on ice than fire. But even without an active volcano oozing lava, the project is a powerful reminder that Iceland remains a location worthy of a plane ticket.

Are you left wanting more of the Land of Fire and Ice? If so, check out this incredible time-lapse and drone footage of Iceland made by Fstoppers founders Lee Morris and Patrick Hall.

Andrew Faulk is an American photographer based in Tokyo, Japan. Though specializing in portrait photography, Andrew dabbles in all things photography. He is a husband, father, and lover of fried food.

Travel / January 6, 2020
Film and Travel Inspiration for All Creatives: 'Made in Korea'

Ok, fine, you win. Planning a trip to Iceland now!

I enjoy this on 2 levels. Obviously beautiful... yet also a fine example of craft: filled with examples of graceful, non-jarring cuts.

I just got back from filming a wedding there. While we were BOARDING the plane in Seattle, they took my drone from me because I didn't have the proper "paperwork" to bring it into Iceland !? I have since searched and searched for this and can't find anything online saying you need something special to take a drone in. Has anyone else dealt with this?

Uh oh. I was planning to do the same! Not aware that you needed special permission. Damn...

Perhaps printing a media pass will help Dave? Just a quick thought. Though, I don't know if that will sort the issue.

I saw that tip, not sure it's legal though. Not worth the risk.

This is a new one. I am living in Iceland and there are no rules here banning you from taking your drone with you to and from Iceland. As far as I know there is no paperwork needed. There are many tourists here bringing their own drones.

I was in Iceland with my drone 2 years ago. I also follow the discussion on this a lot. And they recently established a few no drone zones in Iceland already. But there is no general ban and to my knowledge no paperwork needed (except that you should have the usual insurances). I guess if the airline(?) took it away from you, this was due to not properly informed/overcautios staff.

What I'm hearing here is exactly what I thought was the truth; that there is no "paperwork" I needed and the Icelandair employee was misinformed. We're going to write to them and complain a little. Even though I was able to get a little drone footage from a friend, and I could always get some stock footage to use in the film, I can still make the case to them that they affected the quality of the product I was paid to create for my client by mistakenly taking away one of my tools to do my job.

Travis that is VERY strange. I just returned to NY from Iceland and brought my Phantom on the trip. It was checked baggage in it's own hard case. I flew Delta,not Icelandic Air. Maybe the airline makes a difference. No problems whatsoever. I checked ahead of time and droning is totally legal in Iceland with pretty much the same common sense rules as the US has. I'm so sorry to hear what happened.

Of course the video is beautiful but when I see someone using a drone, for photography or anything else, I curse them under my breath. My first love being landscape photography, seeing this little, noisy piece of technology hovering overhead p*sses me off in ways seeing another photographer wouldn't.
I guess you have to break a few eggs to make mayonnaise. :-/

I only curse them 'cos I want a drone!

I can't understand why it would annoy you though, there's a good deal of tech in any DSLR. Drone togs are just using technology in a different way to show their audience a different perspective.
Maybe you just secretly want a drone too?

A dSLR is much less intrusive than a drone. I dislike them for their effect on the experience as well as their negative impact on the wildlife they encounter.

I don't want a drone, secretly or otherwise. I would like to have a pony, however! :-)

The video is good but it's a strange choice to feature as an aerial of Iceland.
In my opinion there are much better drone videos of Iceland then this one, for example https://vimeo.com/134008155

There are not mine so I am not promoting, just saying could be a better choice for Fstoppers post.

Very nice, but I like the fstoppers video done a few years ago better!

Was just there in August. What a fantastic place- the people, the scenery, and the food. Cameras got quite a workout!
If you go, of course you have to visit Reykjavik, but our other favorite of the trip was a small town called Ísafjörður, in the west fjords. Magnificent place! The enclosed pic is from there.
Only bad thing about Iceland is that it's very expensive to visit. 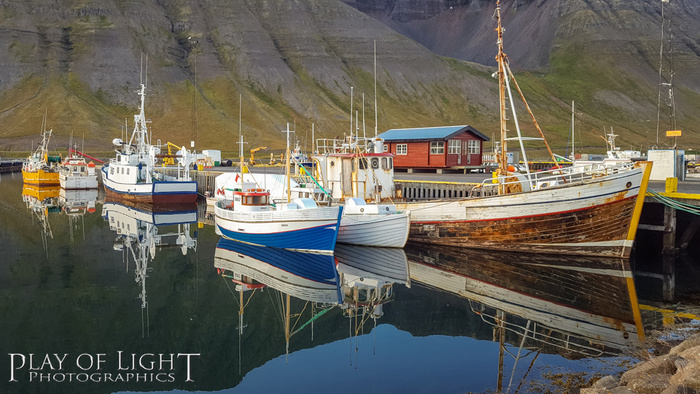 Truly one of the most inspiring and soul-shattering countries I have ever visited. No matter the equipment you bring with you, even if it is just your cell phone, you'll surely catch stunning images. It is impossible not to. This is a very cool perspective, though!

I love good cinematography and I love Iceland just as much as the next person. But I cant help but to feel sad when I think of the hordes of people that are flocking there. For years I have seen first hand what masses of tourists hungry for adventure can do to such a pristine area. Makes me worry about this place...