Lukasz Palka, a Polish travel photographer currently residing in Tokyo, embarked on a photo series aiming to document the more intricate details of such a gigantic metropolis. We chatted with him to find out more about his thought process throughout the project.

So why Tokyo? Every city has a lot to offer, but Palka landed on Tokyo because of what he describes as “little pockets” located throughout the city. Having never visited, he informs me Tokyo is effectively several cities, or “downtowns,” within one. As he puts it, there are “interesting little moments and stories happening within a greater context.” The neon-drenched nightlife, unique balance between tradition and modernity, and endless urban scenery make Tokyo a haven for travel photographers and an apt location for the shoot. The series’ images range from the crowds of Shibuya Crossing to the heights of Mori Tower, via Buddhist monks and the street life of Tokyo. Ready to begin the photo series, Palka equipped himself with a Nikon D5, D500, and D7500, plus the following telephoto and zoom lenses: 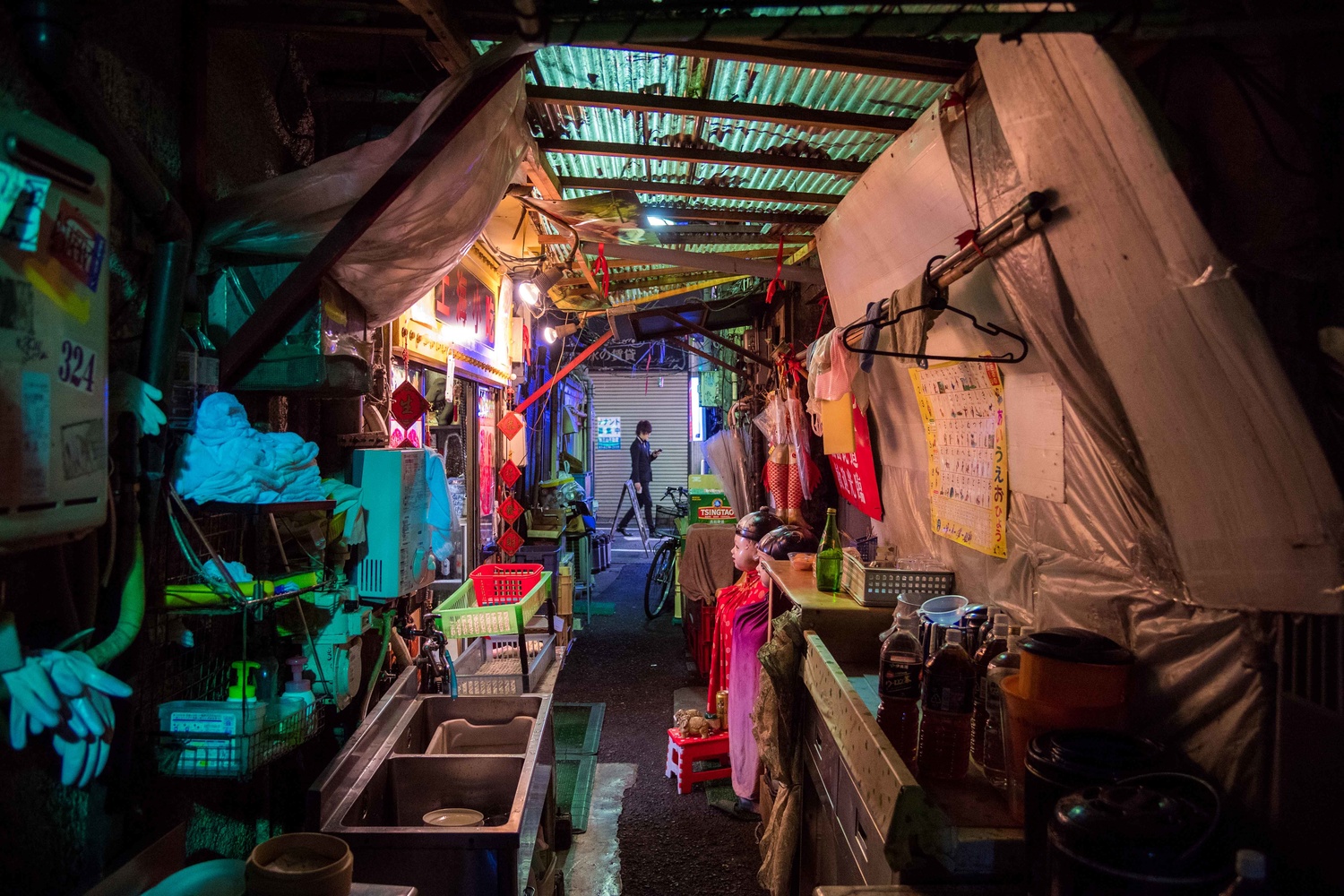 The next step was deciding what and who to include in the series. Initially overwhelmed with potential ideas, Palka knew to some degree he wanted to include people. Feeling that youth culture such as the world-famous harajuku and cosplay styles was already oversaturated, he eventually settled on the elder generation. Everyone from workers to monks were to be the focus of the series.

“As a travel photographer I’m looking for robust and versatile equipment that ensures I can capture a range of shots from just one camera body and lens,” said Palka. “Tokyo offers a huge variety of potential shots, and each of the four lenses I used on this shoot gave me the scope to cut through the chaos of this incredible city and isolate the key elements that make it so special. The resulting images reflect my passion; giving people an insight into this iconic metropolis from a different perspective.”

Palka cites the 24-120mm as his favorite lens of the bunch. He was already a fan of it for his previous personal works, quoting its sharpness, nice range, f-stop of 4, and high performance of ISO as highlights. This was the lens he used for most of the “Cutting Through the Chaos” series.

In the beginning, he enjoyed shooting predominantly with long focal lengths, in line with his creative background as a street photographer favoring wider lenses. Notably more experimentation ensued as the project developed. He quickly honed in on a visual style, consisting of long shots, compressed, with the geometry more flat. 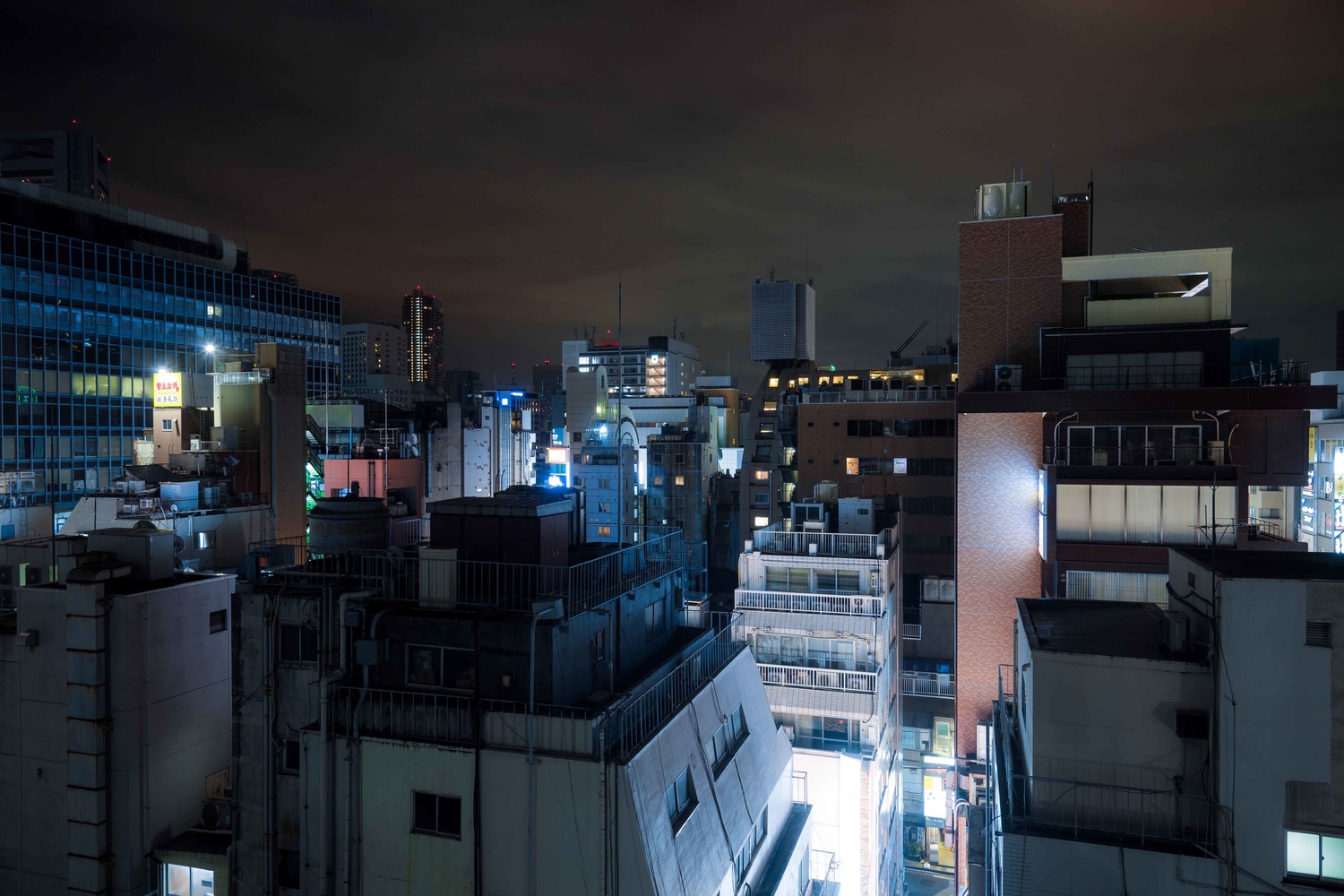 With so many of the images taken at night, I had to ask about shooting in low light. Palka told me only one of the images were taken with a tripod. The rooftop shot (above), was an 8-second exposure. As for the Tokyo tower shot, tripods were banned and instead Palka had to style it out balancing on a railing. For that shot he wanted zero noise. Choosing to photograph it from the roof of the nearby Mori Tower, he went for the D5 and AF-S NIKKOR 28-300mm f/3.5-5.6G ED VR, waiting for an evening with a gorgeous blue hour and the city enveloped in a haze. This way the warm tones of Tokyo Tower contrast nicely with the ghostly blue hues of the city. His specs for the shot were 50mm, f/8, 2 sec, ISO 100.

So what would be Palka’s advice for any aspiring travel and documentary photographers?

For the series, Palka teamed up with Nikon who released the collection of images to correspond with their 100th birthday. The images showcase the capability of Nikon’s all around zoom and telephoto lenses to isolate specific detail amid confusion and commotion.

Check out more of Palka's work on his website.

since when is 24mm "shooting tele"?
regardless: awesome footage

So many errors in this...Nikkor 24-120 is f4 not 2.8. He's using "zooms" of varying degree, not always telephoto.
Tokyo is a must see for any tourist or anyone with the slightest interest in seeing a fantastic culture that always courteous and open (I'm from San Francisco, so I see the worst side of things around here...). I will be back in 2020 for the Olympics and can;'t wat to spend so much time here after 20 years away.

Despite that the article reads like a mistake-ridden advertisement for Nikon, I do like the pictures. Living in Tokyo for several years now took the foreign feeling out of many sceneries, but I definitely can remember the initial fascination when I look at his pictures. Very well framed Tokyo moments!

I've shot Tokyo for almost 20 years with telephotos. Prime telephotos. We hear a lot about prime vs zoom in this day and age and for me the argument goes way beyond the convenience of zooms or the fact that primes do one job and therefore are better at it.

I agree with the title of this piece: cutting through the chaos is exactly what this feels like.

I can hear a lot of myself in what Lukasz says because I know he pays attention to everywhere I go and shoot. The map I made, with over 150 locations in Tokyo (each with an accompanying photo) I think probably served him pretty well in seeking out some of these spots and planning where to go for the photowalks and tours he does. Cool. I share because I dont mind sharing. It's one the reasons I like teaching photography: it's good to share, to open people's eyes, to see them interpret stuff themselves. Because I'm a bit old-school, I also think it's nice when people tip their hat to the folks who pointed them in the right direction. I always do it. But I wont lose any sleep over people who don't.

That shot of the people in the bench, shot straight down from the 6th floor of the International Forum: that's a great vantage point and a shot I first took about ten years ago and shoot once a week on average, because it changes with every group of people you find there. Lunchtimes are the best. The shot attached, one I took there a few months ago, has a bit of everything: the student, the worker, the retiree with sometime to kill, the office lady eating her lunchbox.

That building is a wonderful place. I've been going in there for 18 years now and whilst, at first, you always want to shoot wide because the place is so magnificent, after a few years you get the telephotos out.

Seeing at 300mm is something I can do quite easily now. It's a lens I shoot a lot on the Nikon and on the Hasselblad H4D. All be it that on my Hassie it's about 260mm equivalent.

And seeing is the key and that's where primes kill it. Zooms are handy. But with a zoom you've got a whole variety of focal lengths in your mind's eye when you're carrying it. With the prime you can really build that muscle that allows you to pre-visualise the world at specific focal lengths.

Tokyo's a fascinating place to shoot with long lenses. Tokyo is dense. Very dense. Telephotos obviously collapse perspective, foreshorten distance again. So as well as 'cutting through the chaos', they further increase the feeling of density and proximity in the city. Another reason why I love shooting with 300mm and over here.

The recent series I've just done with Hasselblad is all shot at about 100mm, but with the HTS1.5 tilt-shift adaptor. Has been lots of fun. Again, very specific gear that allows you to pre-visualise the city and therefore seek out the best spots for shooting. 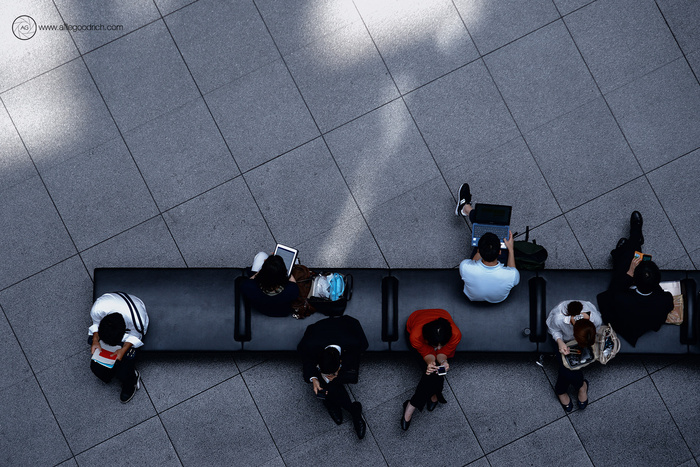