How to Quickly Light and Composite Architectural Interiors

A great portion of my business is spent on architectural photography. My technique involves using a mixture of ambient light, flash, and tungsten hot lights blended and masked together in post to create well lit images that are time consuming to shoot and often frustrating to edit. I'm always looking for other techniques and resources to incorporate that will allow me to work more efficiently and/or improve my images. This week I found such a technique right under my nose.

One of my "friends" on social media (never actually met or spoken with him before) is a brilliant architecture photographer who creates some of the most crisp, clean, attractive images I've seen in a while, with a look that isn't just mimicking others. After he commented on one of my recent IG photos, I decided to take a look at some of his recent posts, and eventually bounced over to his blog. I was ecstatic to find he'd created several behind-the-scenes videos and screen casts of his workflow!

Barry Mackenzie is a Canadian based photographer and owner of Seven Image Group, who's recently been added as an agency photographer with Brandon Barre Studio. 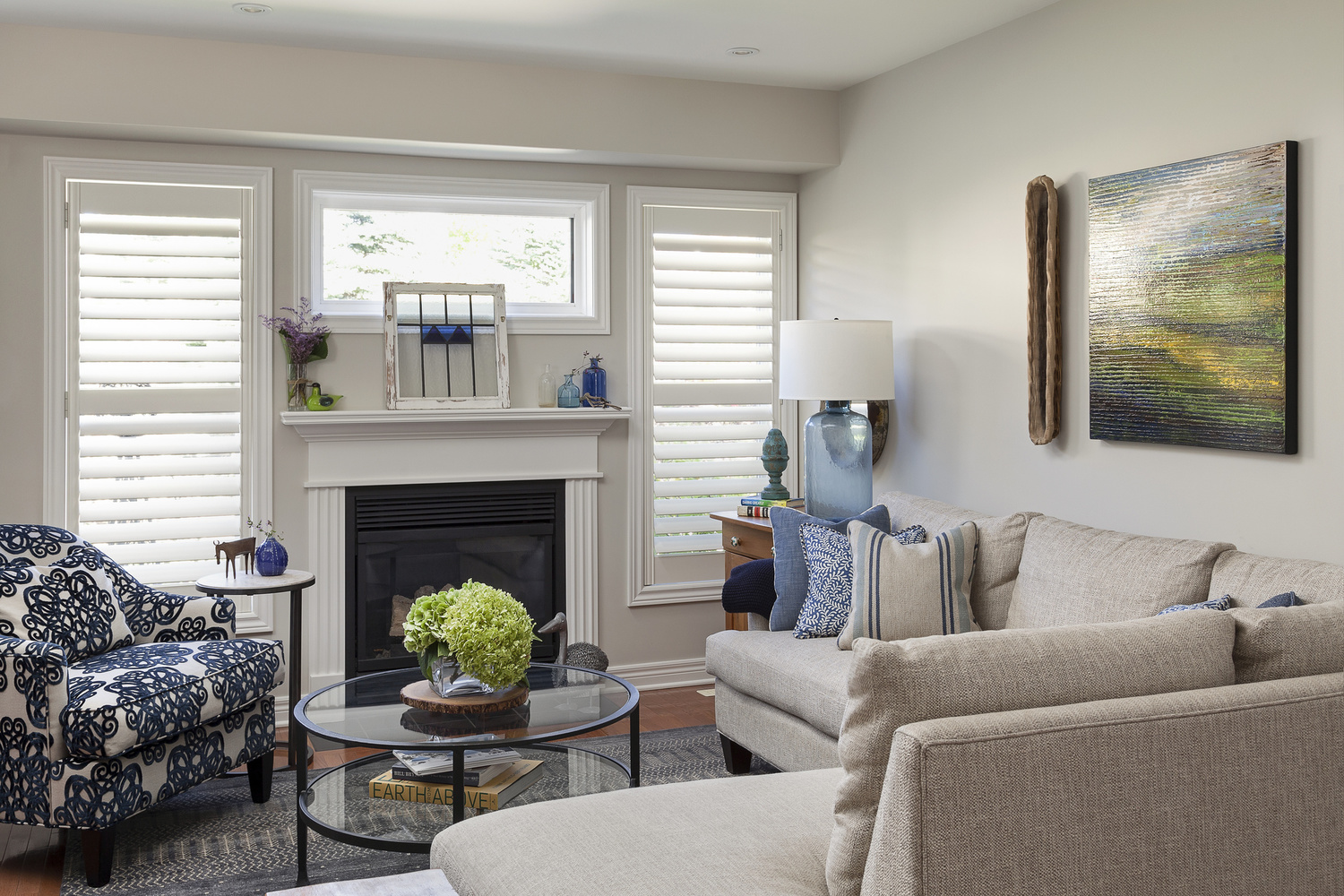 My journey into shooting interiors started about 3 years ago shooting real estate in a market over saturated with a bunch of run-n-gun, ultra wide angle, HDR, giveaway artists.  I found out very quickly that I needed to make my stuff stand out or I’d never make it.  I learned the fundamentals from Scott Hargis' book and video series.  His philosophy is pretty simple - expose for the bright stuff and light the dark stuff.  That was all fine and dandy and I got good really quick but my photos didn’t have the sizzle that I wanted - I wanted my stuff to look like the photos I was seeing in shelter mags at the bookstore.  The main problem is real estate is quick and dirty - especially when you’re shooting 3-4 houses a day.  During that time, I had also been following Mike Kelley’s blog which was long before his Fstoppers video series came out.  What I came up with is basically a hybrid of both Scott and Mike’s technique.

Mackenzie starts by bracketing a few clean ambient frames. He uses theses frames for the ceiling and the overall exposure.  From there, he determines where the brightest thing in the room is that he wants to retain detail in (usually a light fixture or a window) and then begins lighting.  Mackenzie uses speed lights with a combination of bounce and shoot-through umbrellas.  Once he has the exposure close to where he wants it, Mackenzie starts to blanket the room with a soft global fill by bouncing off the ceiling or walls.  The light comes back super soft and non-directional so he also tries to add some supplemental directional light so the shadows and highlights make sense with the natural light in the space.  An average shot, Mackenzie says, will have anywhere from 3-5 frames that the composite is built from.

Crafting this technique enabled me to build a strong enough portfolio to where I’m finally climbing out of the trenches of real estate photography and into high paying commercial and design work. 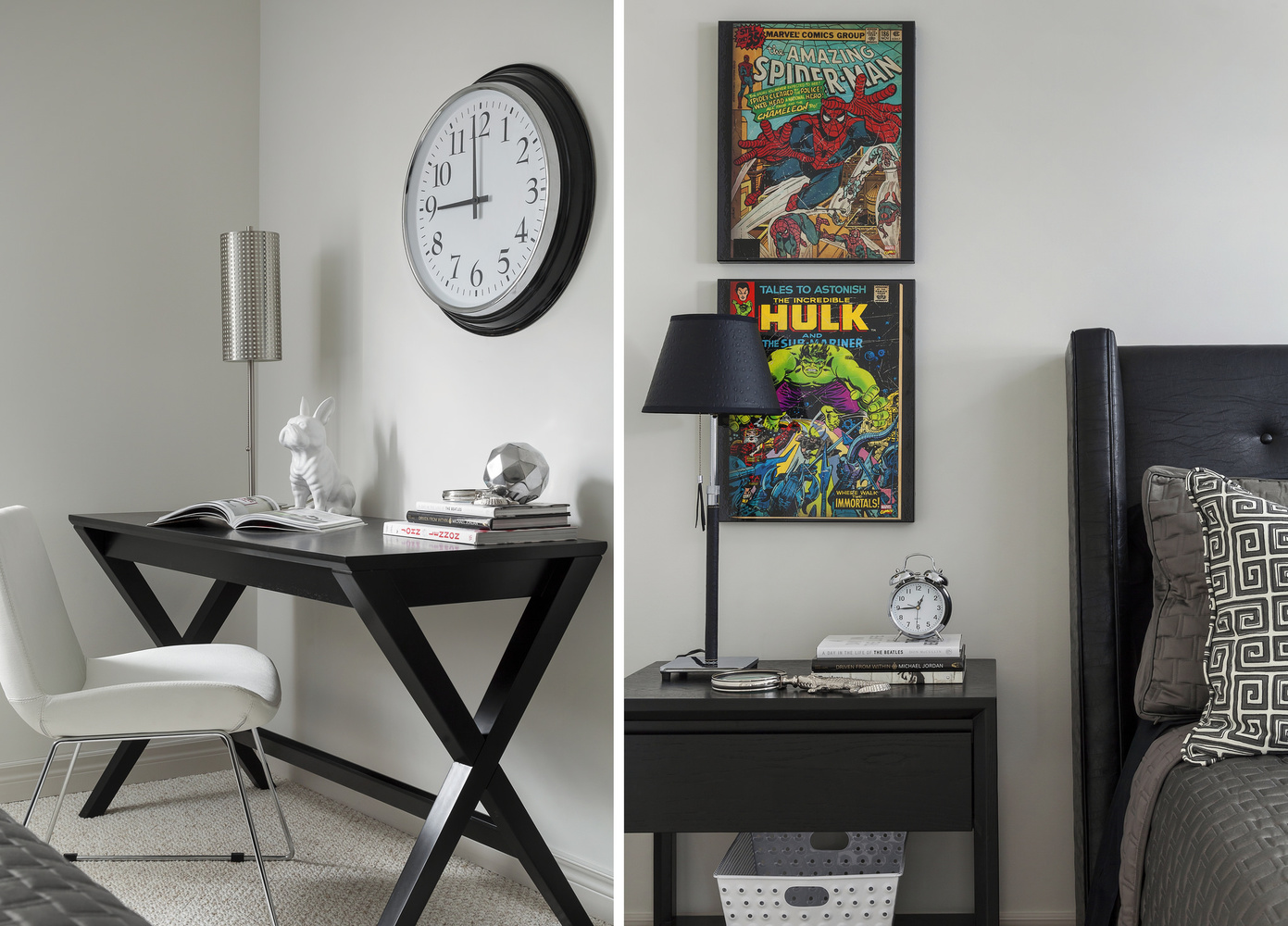 What I found unique about Mackenzie's approach is that he uses the bounced light to illuminate furniture and other details in the space rather than the more popular method of lighting them directly. Then his process is similar to mine (and others) where he paints those portions into the rest of the scene. The result is a much softer look that is very subtle and ambient looking. I'm anxious to try this on my next architectural shoot and see if I can somehow incorporate the technique into my own workflow. 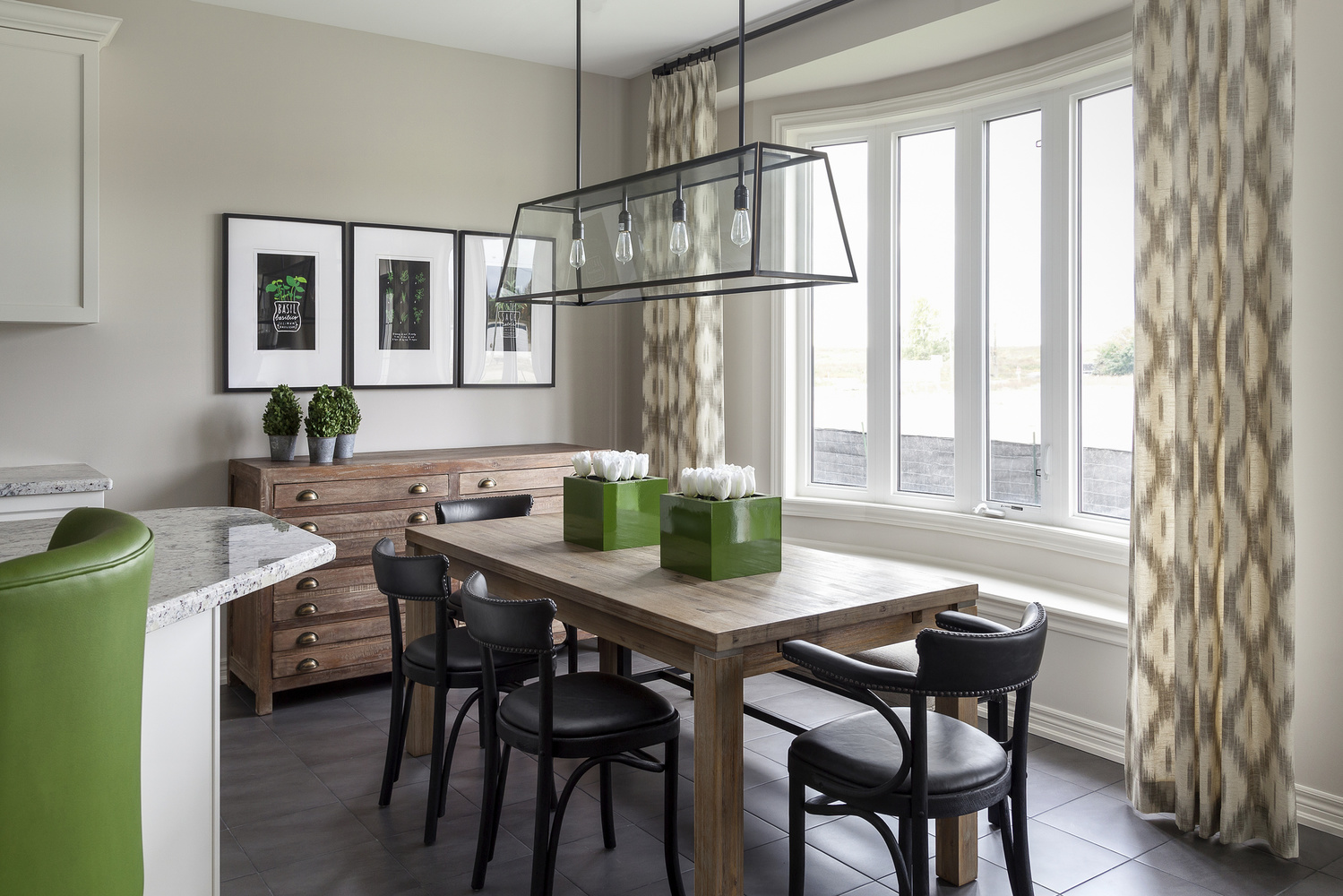 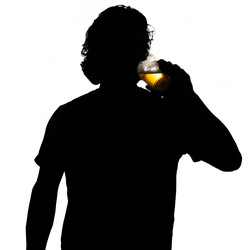 Tony Roslund is a third-generation photographer, specializing in architecture and food imagery. He is a nationally recognized member of the American Society of Media Photographers and the Association of Independent Architectural Photographers. 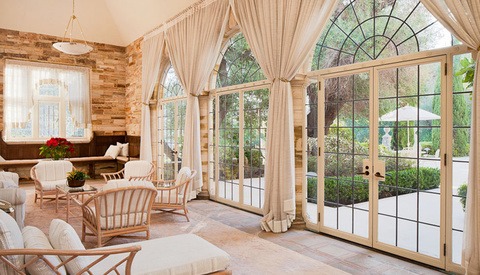 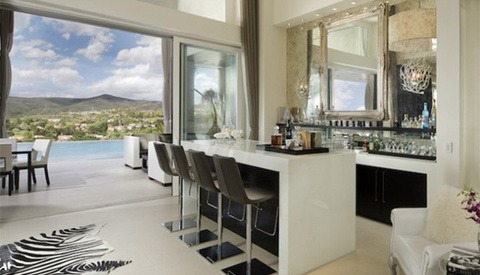 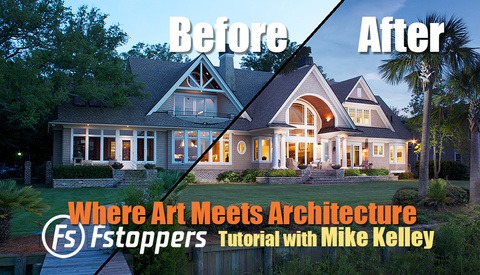 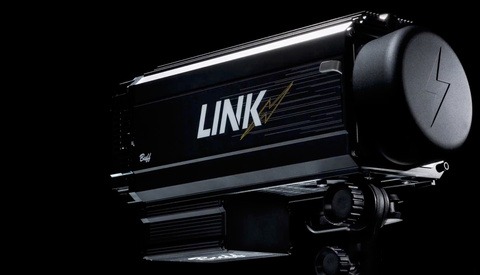 It seems industry standard to bracket ambient and mask in bounced lights these days. Your described method doesn't seem much different to what's shown in the video. What exactly does Barry do that's time saving?

When I light objects in the room, I donso directly and then paint them in during post. Barry is bouncing light to illuminate more than one object at a time, which he can then paint in during post, essentially resulting in a similar effect, but with many less exposures. Additionally, by using a bounced light to illuminate objects, he's getting a softer light falling on said objects. I think it's a nice variation on what most people are doing, and I thought other readers may find it interesting as well.

I actually had to read this part twice and think about how different it would actually be.

I think for many not familiar with the style/genre(myself included possibly) the difference might appear subtle at first...but yes, it does seem like you would wind up with a more natural look. This is of course compared to some of other architectural works where things are lit and you have no idea where the light is coming from. Not that the latter is in any way bad...just a different style.

Thanks for the interesting read.

Thanks Jason, that was EXACTLY what I took from the whole thing. It's subtle, but interesting and another tool for the archive. Glad you understand where I was coming from with the article. Most will probably not get the nuance here, but if you're an architectural junky like myself, you can appreciate Barry's technique.

I liked this a lot, thanks Tony for the info...

It's subtle Fred, but a cool approach. I'm looking forward to trying it myself soon as well. Thanks to Barry for sharing this info . . . if he's watching. ;-)

"He uses theses frames for the ceiling and the overall exposure."
I totally read that in the voice of Golum. ;)

Thanks for this! I've been following Barry's work on the PFRE Flickr stream for some time, and his images are always enviably impeccable.

Awesome article, thanks for sharing Tony, been looking to head in this direction as well, nice to see how others approach the challenges

I'm going to be the grumpy one here.

I appreciate the different approaches and the information in the article. Thank you for posting this.

However, just as a point of critique. I found the videos beyond useless without any information at all. I could tell you were painting in things, and switching them off and on to see what it looked like, however I I could not really tell what you were doing, why, or how. It was just a bunch of blinking images and a moving cursor for the most part.

I don't see how the videos added anything to the discussion.

well if you pause the video or download it and go through it frame by frame you can get a better idea. Yes I know its not the easiest way to learn from the videos but hey it works.

One of the videos he walks you through the entire process, slowly. With commentary.

Which one was that? I must have skipped that one after trying the other two.

While I like direct light for some images (they create some awesome dramatic images and the direct light does a great job at bring out texture) however I do want to get better at creating that more soft and natural looking image like these.

That's kinda my thought too Austin.

Same here, his final results are very natural. I often see composites that are shot with a bare flash and the final results don't actually help the image, they end up with a hard shadows and highlights going in all kinds of directions that don't really make sense.

Thanks for posting. Your imput on the PFRE boards have always been helpful to me. Smaller narrow rooms with lots of reflective surfaces (especially with mirrors ) are a challenge for me. For RE, I basically use ambient blending and adjust color sliders (typically temp, yellow, orange, blue) to control color cast. However, i'm never happy with the results. Commercial (non RE) shoots, I generally take lots more time to "trial and error" strobes for shadows and mirror (I usually mask in an ambient mirror shot). This technique looks like a winner I will try this week.

do you have to put the speedlight to full power for this kind of shooting and raise the iso ? if i understand the only ambient frames are those for windows and lights in the scene ? thx for the post and any help.

Patrick, the flash power is all over the place and is affected by things like the wall and ceiling color, how far the flash is from the surface it's being bounced off, etc. It goes something like this: shoot, chimp, adjust, shoot, chimp, adjust, and so on until you get the desired fill for the portion of the frame you're lighting for. Hope that helps.

I just don't see how you can shoot 4 houses a day when you have to supply the client with 30 finished shots! I shoot HDR and process in Photomatix, Lightroom and Photoshop with just over 1 hour for shoot and 6 hours for all the processing, I don't even want to do it anymore, now you're talking about adding flash, bounce, painting in other frames, etc.... all for about $300... and then you get brilliant questions from the client like "can you crop out the tree in the middle of the front yard?" Seriously thinking about finally giving this up once and for all. Oh, almost forgot, then they want you to go back at dusk and throw in a few twilight shots of the front and the pool because the owner thinks his #$%^&* house looks good at night with half the landscape lights burned out and a mix of spiral fluorescent and incandescent bulbs blasting through a few windows at all different brightness levels. No fun at all and sure, there's one or two top tier photographers some where out there that command higher fees, but the vast majority of work comes from local markets and the competition is usually from some millennial that lives at home and thinks if they lower their fee they'll get work. I get email ads from these guys all the time, their work is mediocre and their fees are absolutely laughable and guess what... the agents in my office use them because "they charge good prices". I just don't get it!