Smoke grenades: foul smelling, clothes staining, and a primary tool for celebrating the birth of our nation. Recently, while in Austin Texas, I was introduced to a model, Valerie who suggested we use smoke bombs during the shoot. I was immediately intrigued at the creative possibilities...First thing's first: where do you find smoke grenades in the off season? Well, it's not as easy as it sounds. A quick search on the web uncovers very few sellers, one of which is a company called Enola Gay. But at $14+ a pop and only 60 seconds of burn time (if you’re lucky), this option quickly becomes an expensive prospect. Then there are the DIY articles showing you how to make your own for next to nothing but after panning through a few search results, I started to feel like the terms smoke, bomb, and DIY were setting off alarms at the FBI. Luckily, I found what appeared to be a well-reviewed product called Smoke Fountains through a website called Sparkle Rock Pop. This particular set included five colored sticks of green, red, blue, white, and orange and promised sixty seconds of burn time-all for $12; worth a shot at that price and in my case, they ended up working perfectly.

My next priority was finding a location to shoot at. This can be tricky. In some urban areas fireworks are strictly prohibited in city limits and unfortunately, smoke bombs fall under this category. So, definitely do some research and determine what the rules are in your locale. I ended up shooting at a massive graffiti park in Austin that is very open-minded policies when it comes to creative pursuits despite being in city limits. My suggestion would be to find somewhere that is undergoing urban decay such as an abandoned property, a parking lot, or anywhere that is unlikely to have crowds of people as you are better served avoiding public attention. Do not trespass and by all means, choose a location that will not be prone to fires like in a forest as safety is key. Also, bring a gallon of water or a fire extinguisher with you in case of emergency. While the smoke bombs are advertised as cool burning and therefore, able to be hand-held, this is certainly not guaranteed so be sure your model is aware of the risks and have her sign a release form stating these risks.

Other points to consider are proper ventilation and wind. Smoke grenades are intensely potent and release a very acrid smell into the air that when inhaled, can be overwhelming. At one point during our shoot, the area we had chosen incased the model in smoke making it difficult for her to breathe, let alone pose. Conversely, too much wind completely ruins the effect of the smoke. Despite being very concentrated, even the slightest breeze will dissipate the smoke and ruin the dramatic effect that can be obtained if it is simply allowed to float and envelope your model. Finding a happy medium is difficult but it is unlikely you will nail in on the first try regardless of how well you plan, so just start shooting.

My creative concept for this shoot was to produce something dramatic and edgy. I felt as though the smoke would feature best in an urban environment so I sought out a location that was concrete, graffiti clad, and abandoned in appearance. I brought along my new Xplor 600 strobe which shoots high speed sync and allowed me to underexpose the ambient light for a significantly darker background and a shallower depth of field. In addition, I used a 47” Paul C Buff Octobox, set on an Avenger C Stand, as I intended to shoot full length portraits and wanted the light to cover not only my model but some of the smoke around her as well. For the first shot we stuck with a single stick and because of the enclosed space we were in, the smoke did not have much room to dissipate. It was a bit stifling for our model and the smoke was so thick at times, it was hard to see any of her features or the colorful background.

This was my first setup inside of a rectangular, enclosed space. While I liked the composition, the lack of ventilation made the smoke hazardous, ISO 200, f8, 1/640th

While I liked the framing of this shot, it was very hard to breathe so we switched it up and had the model stand on a ledge where I could get lower to the ground and shoot up giving my model a larger-than-life perspective. We also went with two sticks this time, blue and red. This angle ended up being my favorite of the day as the smoke had a curling effect around her creating a pleasing juxtaposition.

For my second setup, I had our model stand on this ledge while I shot from below. My light was positioned just camera left on about 1/4 power

For the last set, our model brought a long board as a prop that she wanted us to shoot her riding with the smoke trailing behind. Knowing that the smoke would simply blow away if she attempted to ride while they were lit brought us to the conclusion that we should have her stationary on the board instead. Additionally, trying to capture her in focus at just the right moment while riding towards us would prove difficult and with a burn time of sixty seconds at best, it seemed risky relative to the creative effect it would possibly add. In the end, we hiked up six floors of a parking garage and shot from the top using a shaded overhang with partly clouds and blue skies in the distance.

Again, shooting low right underneath my light which is barely camera right in order to provide even illumination across our model

This was one of the most exciting shoots I’ve had in a while and I highly recommend it for anyone looking to add some flair to their outdoor portraiture. Part of the satisfaction was directly related to the amount of planning and research I put into the shoot and executing it successfully. It reinforced the idea that putting in a little extra effort beforehand pays off big in the end. I hope you find this article helpful, or at least inspirational, and I’d love to see your results.

You're so lucky you found a cheaper alternative to Enola Gay smoke grenades. I couldn't find anything else last year and I found them very expensive (plus one of them didn't fire) 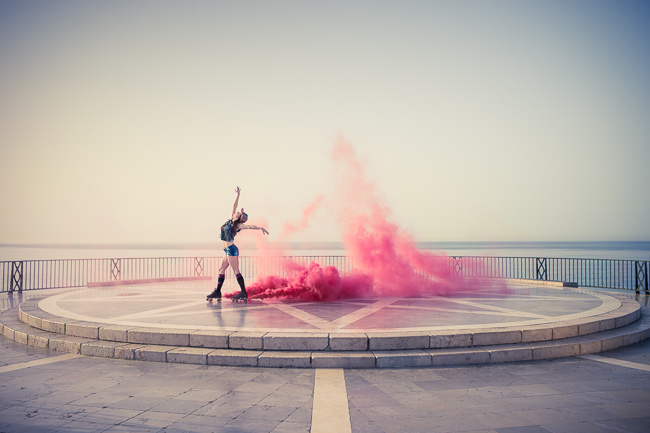 Seemed way overpriced for some reason, the cheap ones worked very well for me surprisingly. Fantastic shot BTW!!

Thanks ! And thank you for the tip I checked if the grenades are available in Europe and they are... with $36 shipping to where I am in Spain !!! Hehehe

I'm based in spain too and I managed to find the Enola Gaye ones from here: https://www.justpaintball.co.uk/grenades-etc/wire-pull-smoke-grenade.html for only £4! 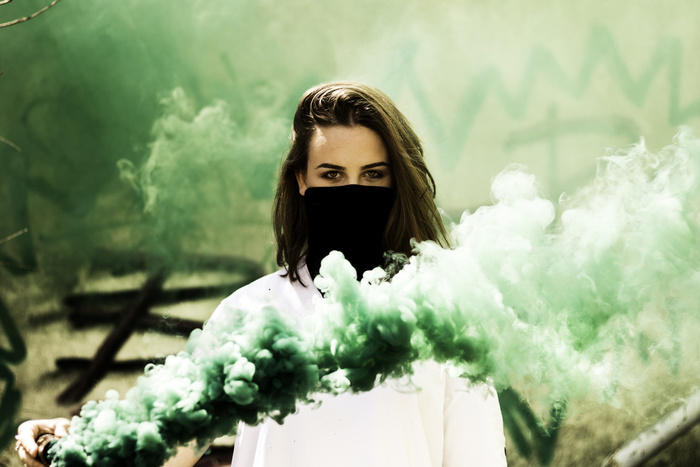 Thanks for the tip man !

I LOVE THIS PHOTO!! can i please use it for my youtube channel banner? i will not take ant credit for the photo!

Love what you did with these too by the way !

These guys do them really cheap (at the moment anyhow!) https://moderncombatsports.co.uk/collections/enola-gaye-smoke-grenades (different colours and styles as well.....

Nice project. I'm curious how you got a Buff Octobox on the Flashpoint, I thought the Buff mount was proprietary, and the Flashpoints are Bowens.

Thx for reading Spy! You are right, I had to modify the mount to fit the Xplor. I had ti buy this Bowens adapter mount: https://www.bhphotovideo.com/c/product/854850-REG/Bowens_RD_6210_BOWENS_... . The Buff mount is held on by screws that clamp down, as you may already know, and can be removed fairly easily with this mount fitting right in its place. Works perfectly IMO and the Buff octo is a beast

OK, that makes sense. Incidentally, distributors of the Godox/Flashpoint Xplor Adorama have a pretty cool set of self-collapsing octa softbox unbrellas that set up and break down in seconds. Not sure if you've seen them, they can fit either speedlights or full strobes. Very cool: https://www.adorama.com/glsbsm38pp.html

Hey William, thx for reading! You may have given me my next idea for an article ;) I would argue high speed sync is better having worked with is so much recently. Most ND filters leave a bit of color cast throughout the image which is hard to remove.

Definitely agree with Mark. HSS can also give you a huge advantage when trying to freeze action, like I did with this shot. No ND filter is going to help with that! https://fstoppers.com/photo/169522

This is awesome Wayne! Do you know what settings you were using when this was shot??

I used a flashpoint xplor. Bought it in November, and it's been one of my best photography investments ever. Opened up a bunch of creativity given that I could never use my speedlights for a shot like this, or shoot in the middle of the day. Now I can do whatever I want, and the crazy part is that it only cost $50 more than what I originally paid for a speedlight (back in the day, not now).

Please be careful using these around flammable materials... they will spark and shoot fire sometimes which can ignite their surroundings.

You don't want to be the jackass photographer that burned down a cool old building like happened in Florida last year.