From Star Wars to Rogue One, we just can't get enough of this series as it continues on to the new generation. I know that I myself can't get enough of the Star Wars saga, let alone the numerous examples of fan art out there, including photography concepts. Photographer Steve Brown has created an amazing Last Supper with The Emperor, Darth Vader, and Imperial Stormtroopers. The final image just blew my mind. From sketching, planning, and retouching the final product, we bring to you the step by step tutorial on how he created this masterpiece. 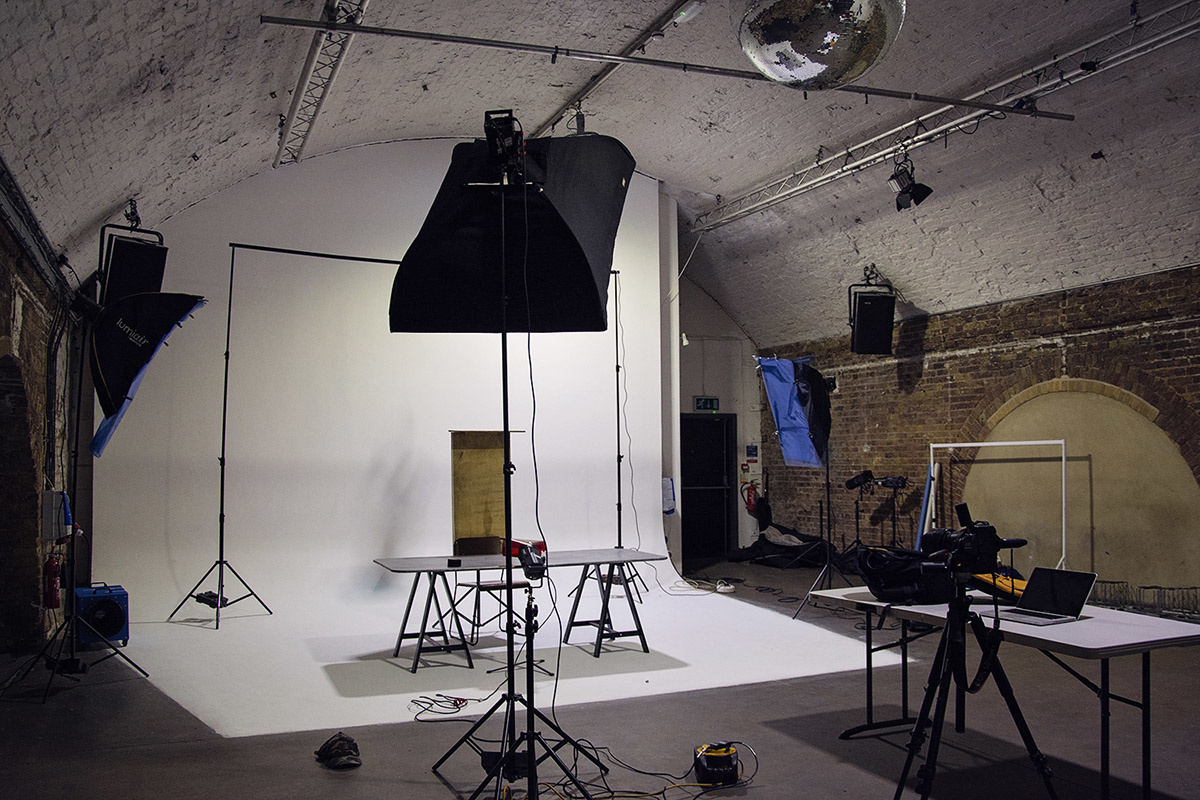 Creating such a concept was a journey for Steve, he explained to us on how he created this amazing image from scratch

Being a fan of Leonardo Da Vinci's "The Last Supper," Steve took the composition and poses of the painting, and used Star Wars characters to populate The Last Supper concept. Using Stormtroopers as the apostles, Steve placed the Emperor in the role of Jesus and Vader as Judas, echoing the movie plot, in which Darth Vader ultimately betrays The Emperor. This concept was solid and Steve was ready to move on to the next step.

After laying out and sketching the idea, Steve had a clear concept on what he wanted to do. He placed the scene in the Emperor's throne room on the Death Star, including the iconic window from Return of the Jedi and The Emperor sitting on his throne, in front of a hologram of the second Death Star. 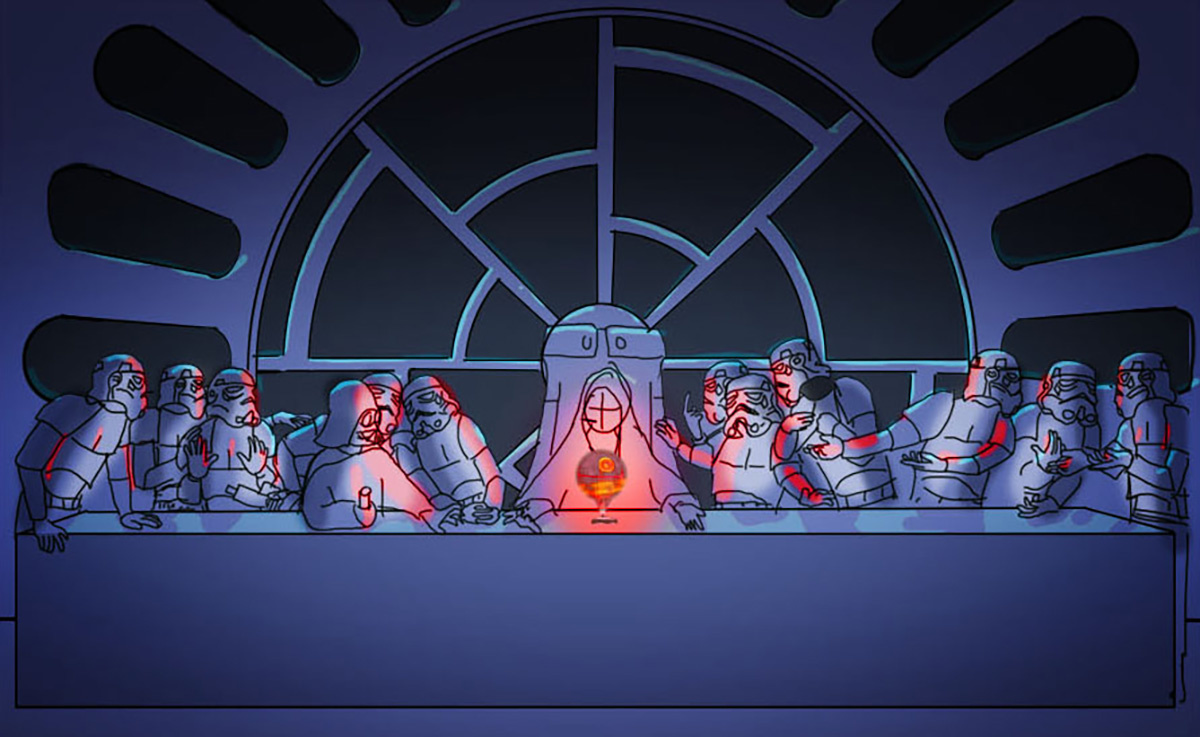 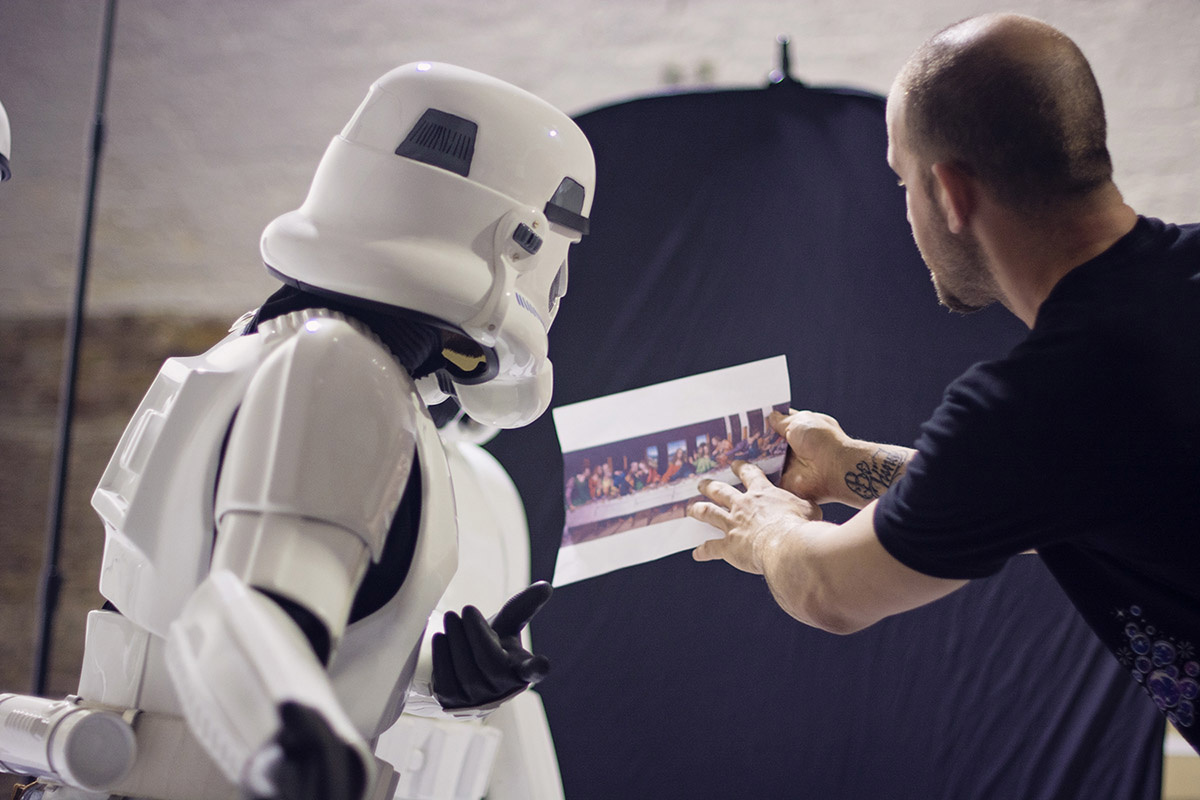 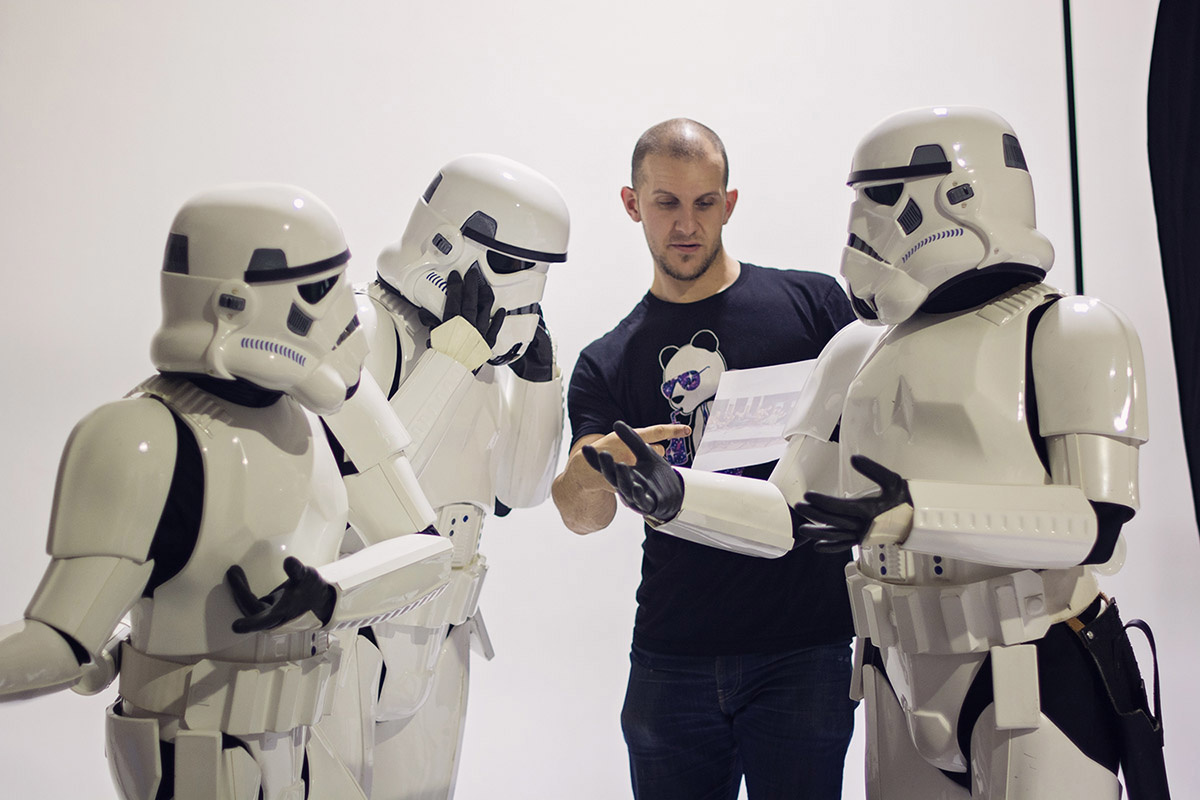 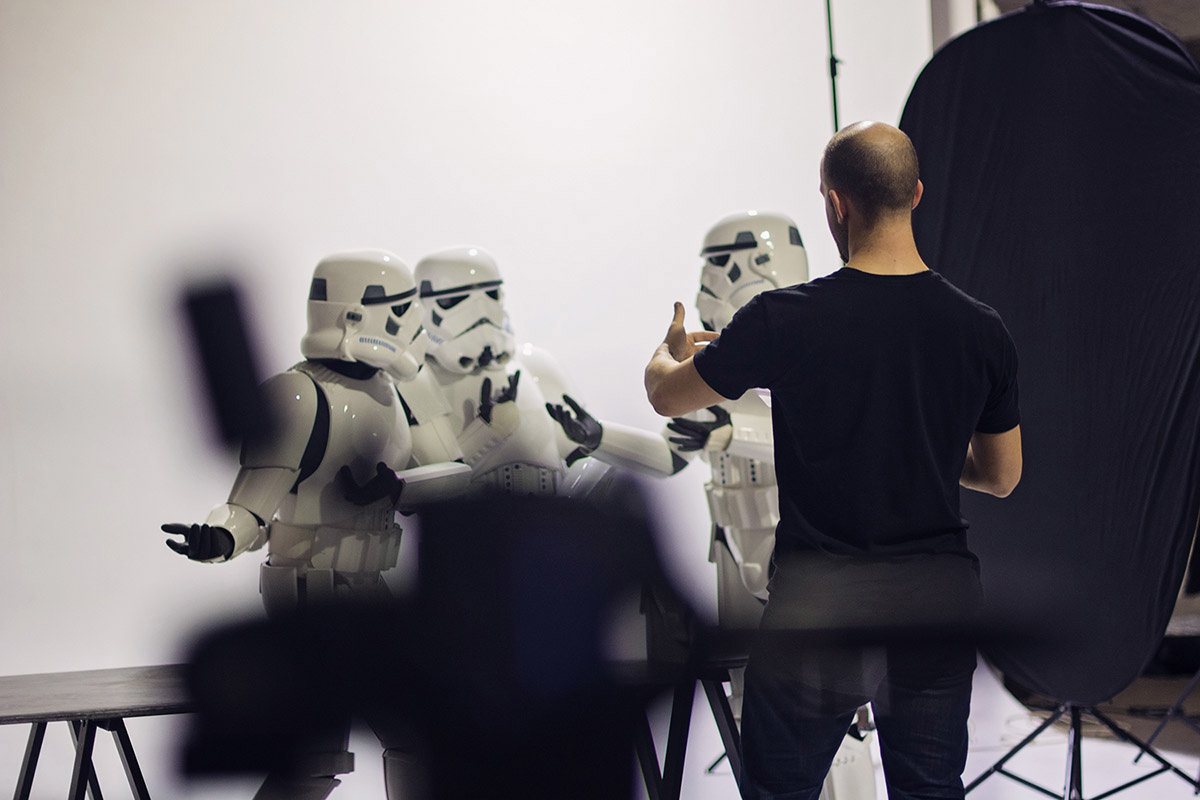 Knowing that if he tried to shoot this for real, the massive set required would be impossibly costly, Steve decided to create the background using 3D modeling. His good friend Steve Newman, a whiz with 3D modeling program Z Brush, came to mind to help him with the concept.

There was no way I could even begin to attempt to build a physical set, so much as I would have liked to make everything physically, I had to design a completely digital set. 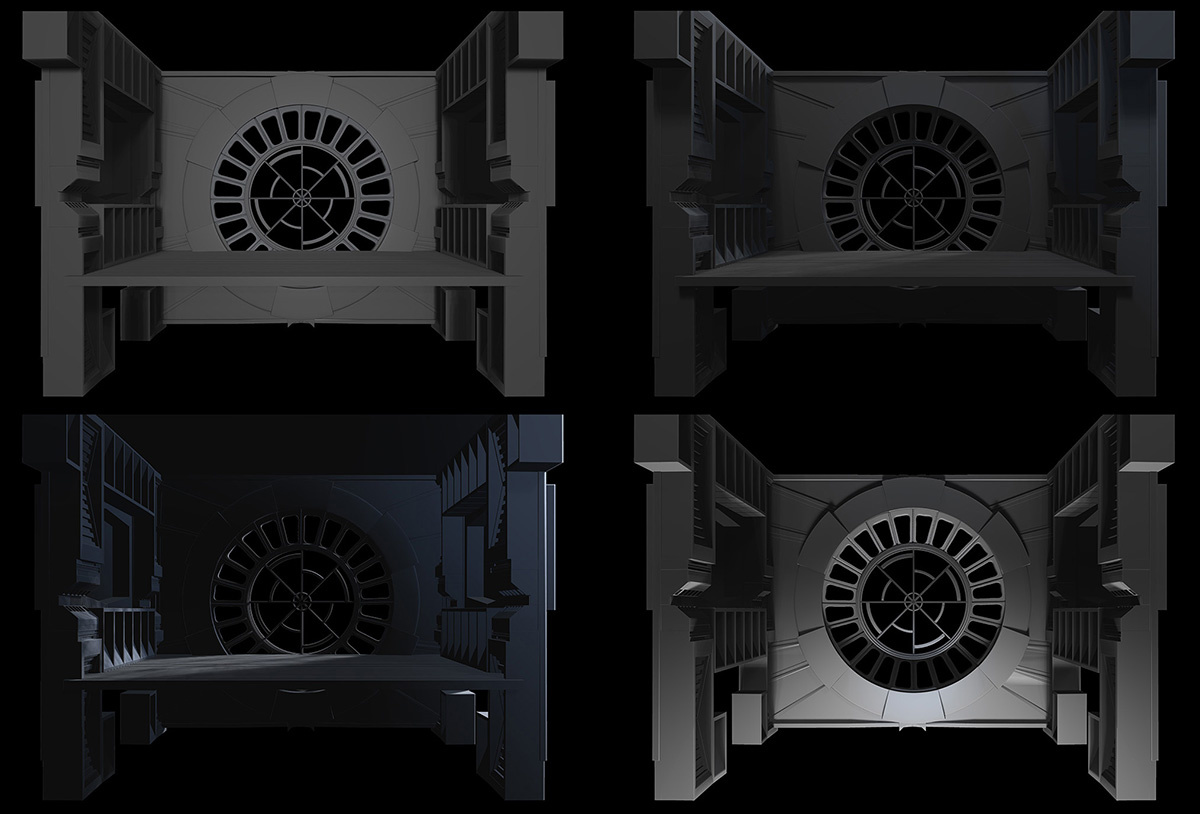 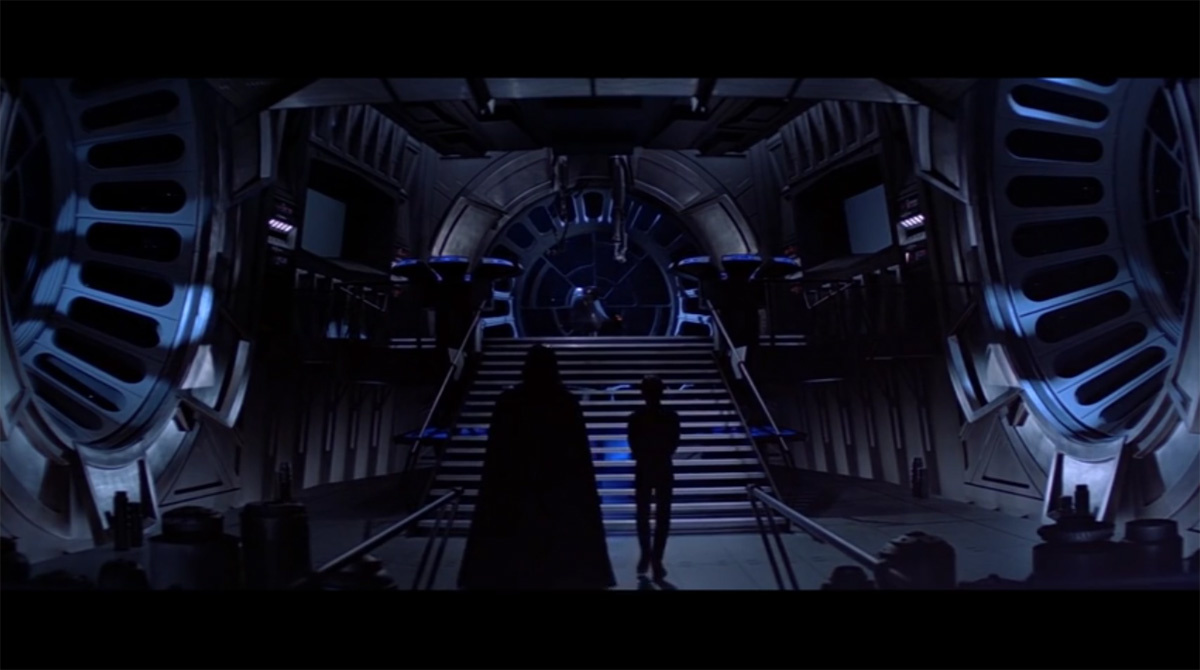 Utilizing friends who were Star Wars costumers, Steve was able to gather an Emperor, a Darth Vader, and four Stormtroopers to act as models. Since he only had four Stormtroopers, and with limited space in the studio, Steve decided not to photograph the whole scene at once. The painting is composed in groups of three, so Steve decided to break the image that same way.

I decided not to attempt to create the full scene in one go. The painting is composed in groups of three, and then Jesus in the centre, and so I split my shooting into the same groups.

Using Bowens Gemini lights, he kept the mood of the shots cool and moody using blue gels. Red gels were added to replicate the light coming from the Death Star hologram in the center of the image. 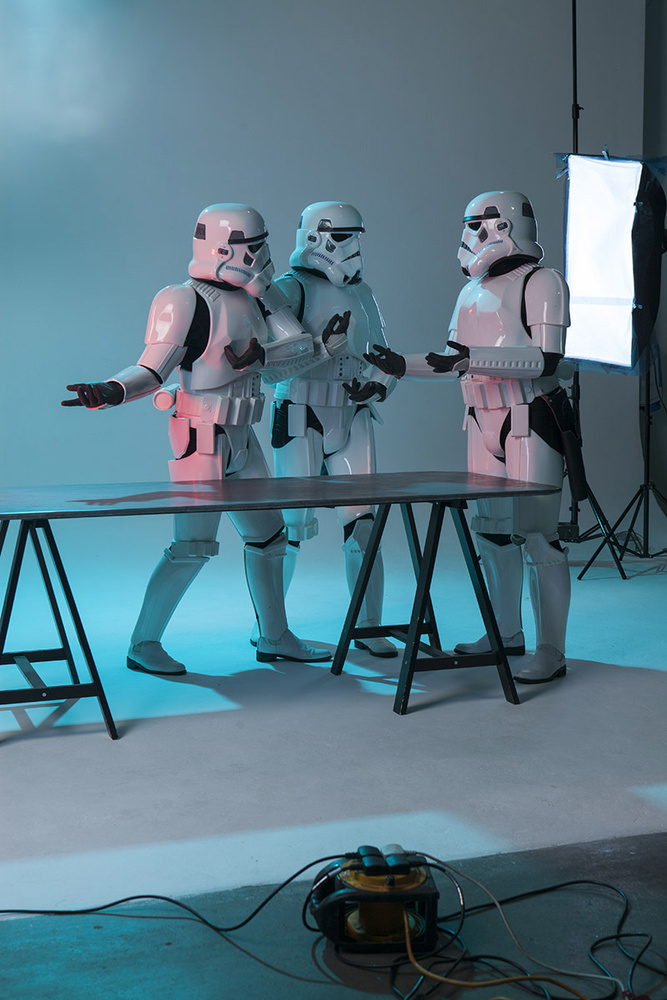 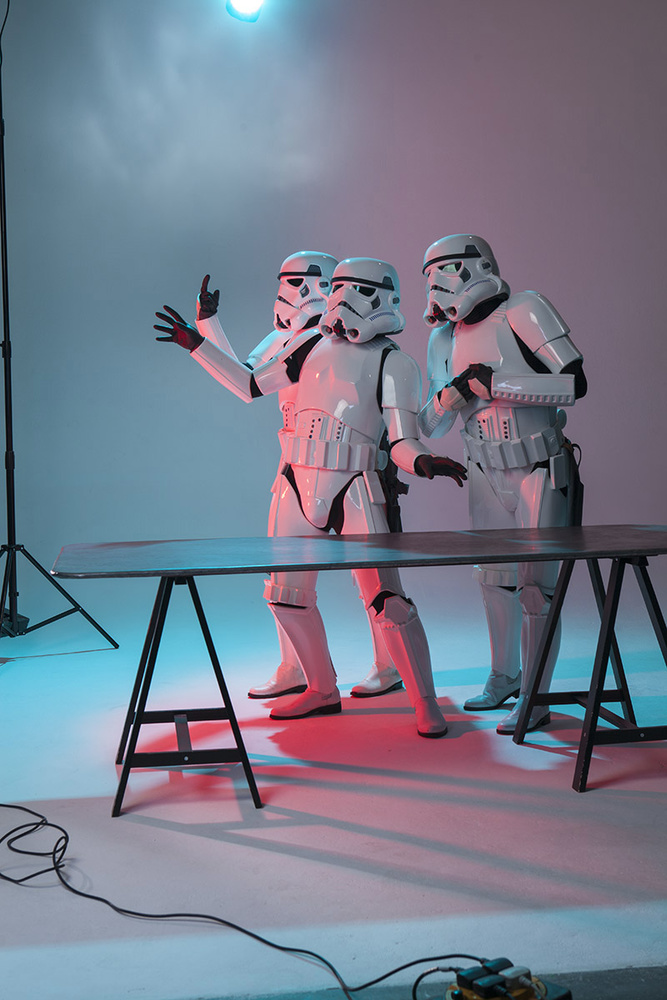 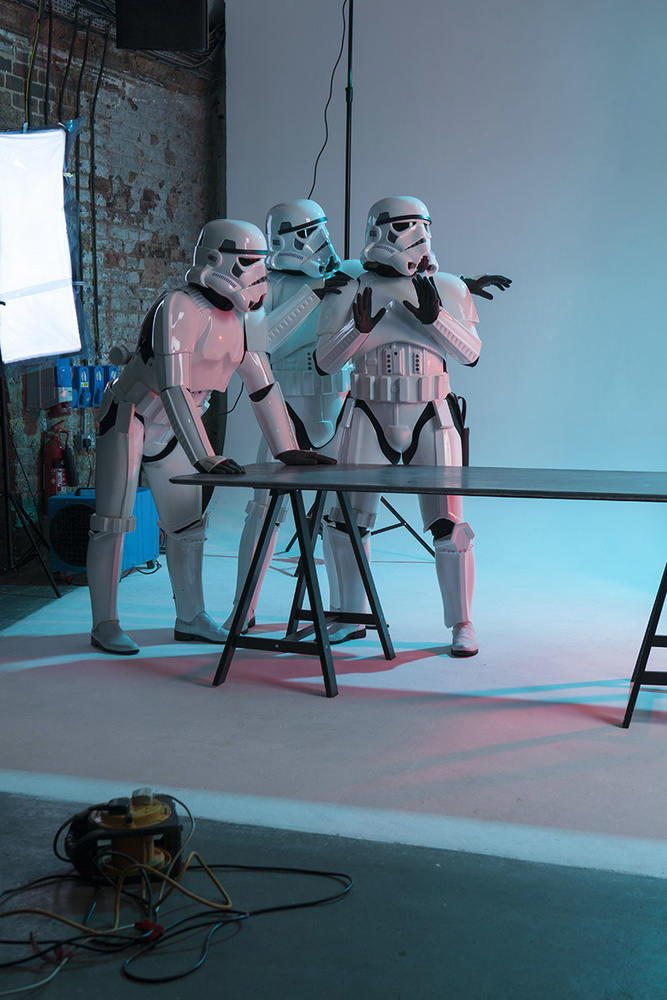 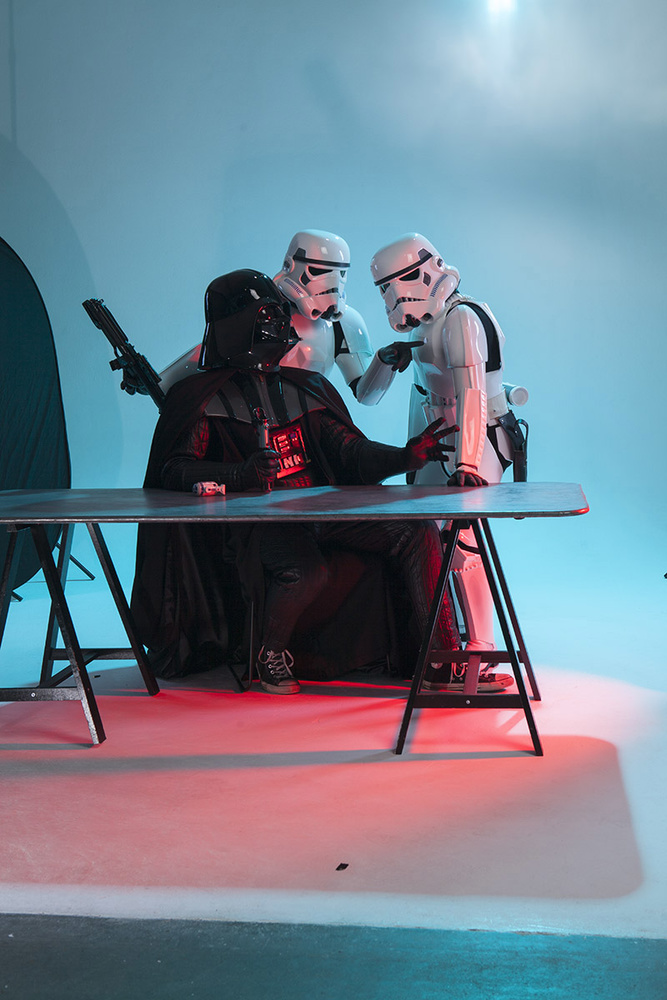 Since Darth Vader and the Stormtroopers have no facial expressions, Steve focused on recreating the specific poses of the various characters in the original painting.

Steve Newman built the 3D CGI set for Steve's concept. Having the sketch prior to the shoot really helped Steve relay how the images are going to look. Newman had a clear understanding on what Steve wanted to have in the image, so he was able to recreate the scene from Return of the Jedi, with the Last Supper table right smack in the middle.

Steve Newman built the set gradually, and I gave a lot of feedback along the way, and in the meantime I cut out the characters in Photoshop and arranged them behind the table.

Steve didn't want the CGI background to look too smooth and fake, so he added some texture to the surfaces in Photoshop to mimic a real world environment, and used the actual zinc tabletop from the studio for it’s real world texture, while Newman created the little 3D holoprojector in Z Brush. Kristin Boyesen, another friend, made the Death Star wireframe hologram. The Emperor’s throne was also made in Z Brush and built up using multiple lighting passes with added texture in Photoshop. 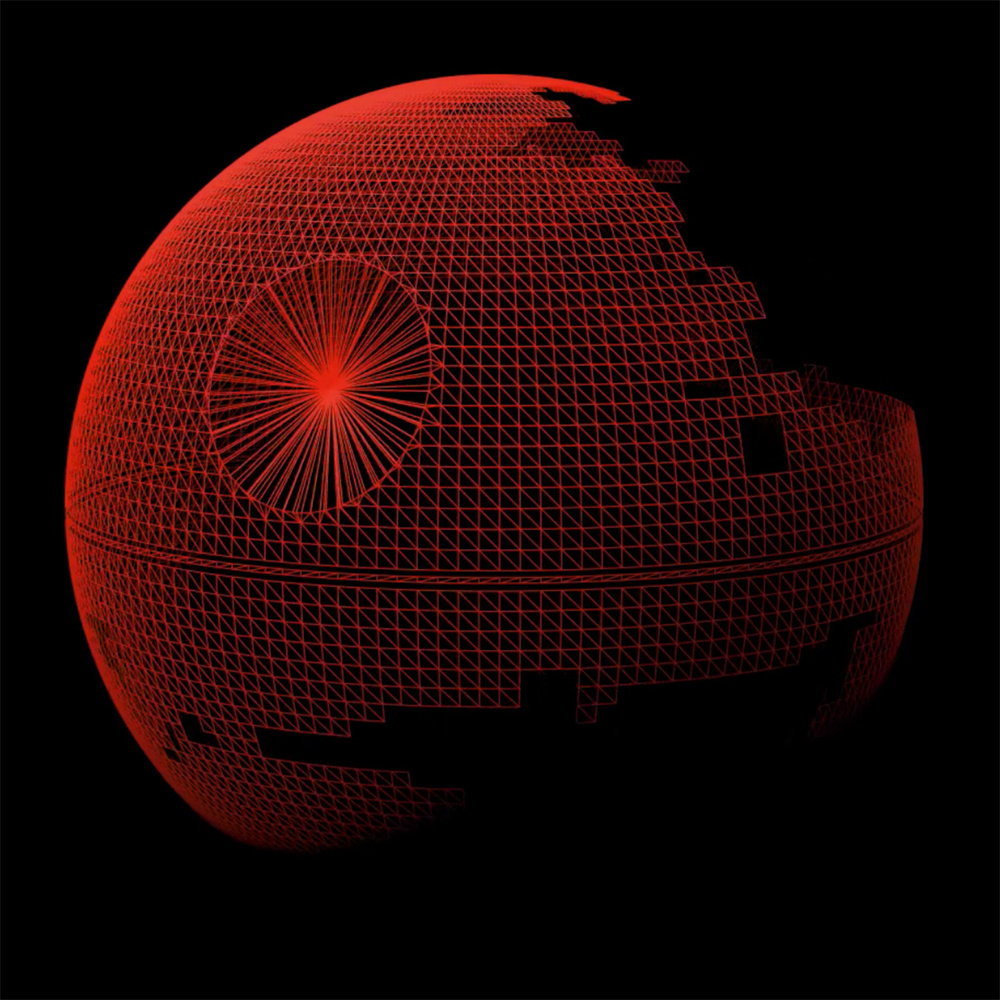 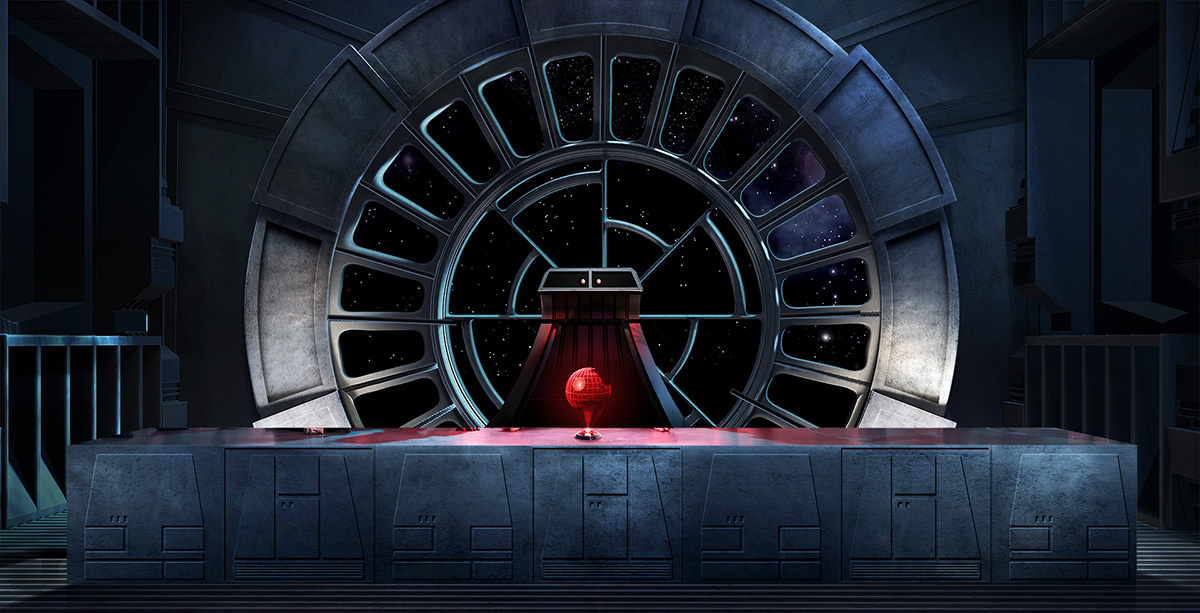 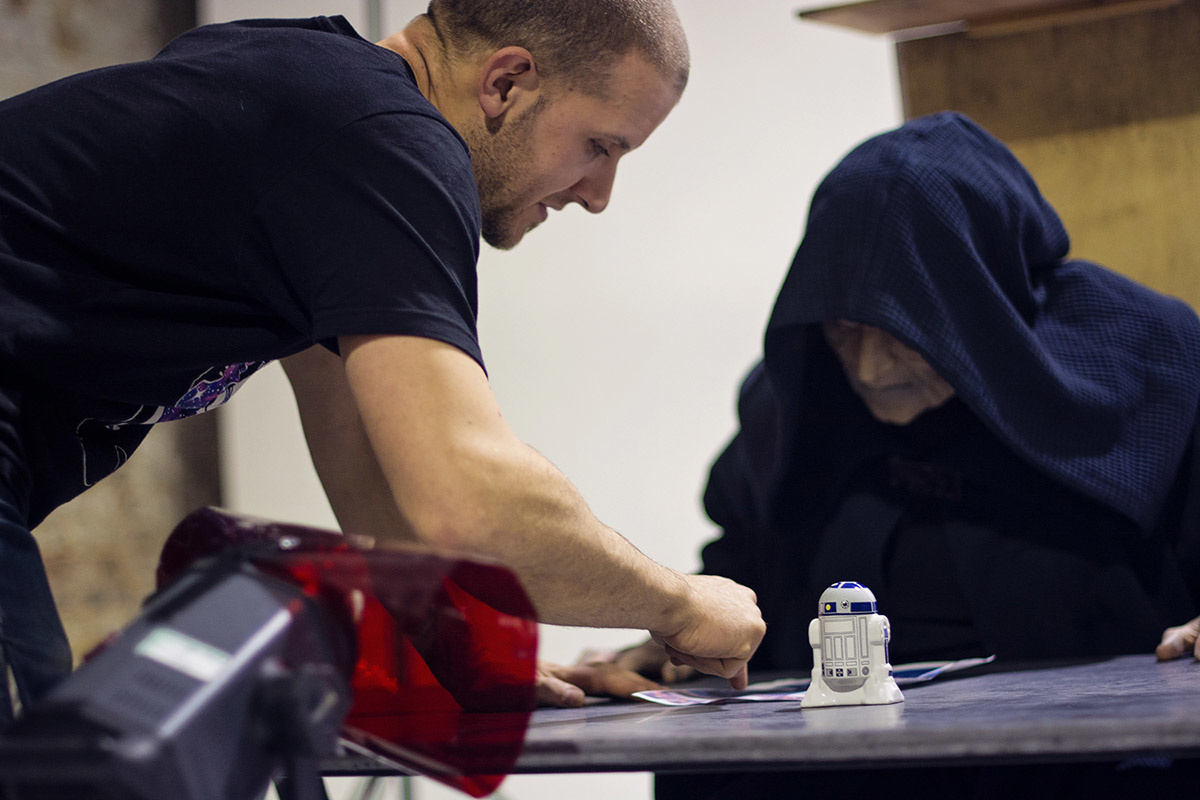 Planning everything prior to the shoot with lighting and positioning really helped Steve merge the final product in Photoshop. With minor color and tonal work in Photoshop, Steve was able to match the temperature and the shadows perfectly.

Because we had been so thorough in matching the lighting between the set and the people, when I dropped the people in they sat into the set really nicely.

The final image was a great success and simply captivating. Steve and his crew pulled off the most iconic painting and rendered it to the Star Wars universe. This was definitely a pleasure to learn and see how the concept was brought to life. What do you think? Can you pull off something like this? 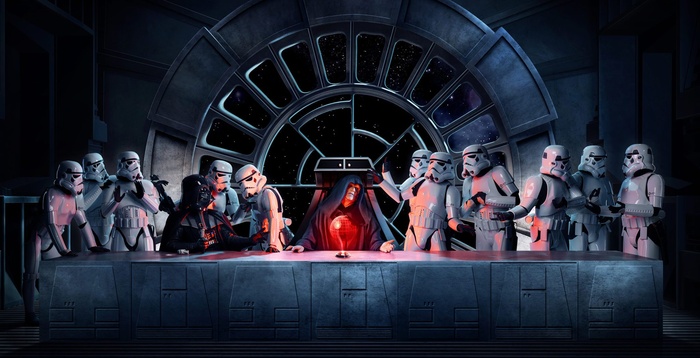 Thanks for sharing Jem

the Star Wars saga can be viewed from both sides with a bit of imagination.

The "other" POV is that the rebels are in fact evil terrorists and the MEpire is really simply trying to bring order in a dismantled republic.

Maybe the photographers is partial to this second POV.

Maybe you're just trying to pick fights for the sake of picking fights like a 12 year old past his internet curfew.

Both references (Star wars and the Bible) are books of fiction, regardless of the faith humans put in them. Stop trying to see controversies everywhere.

Well, I *am* Christian, and I have to agree with you that the image doesn't make that much sense - not to me, anyway. It is well executed, to be sure, but it's like he took an iconic painting and "Star Wars-ized" it. For me, the troopers all give it a lack of emotion, as you can't see any facial expressions etc. As I said, well executed, but I find it a bit strange.

I totally agree, it's well executed and it does bring the conversation regarding the Last Supper to the table.

Interesting concept and a fun spoof on a classic. The last supper is a huge artistic masterpiece and something that is very culturally Important for me as a Christian. Star Wars really resonates with me as a dude. Don't have an issue at all with it, though it just doesn't resonate with me because it lacks emotion.

I know but one can only hope for a decent society I'm an optimist I'm going to get through to you one of these days and try to make you an optimist too :) Sorry for the punctuation errors Siri is typing

I think we should all be only interested in the truth :) We can go all around in terms of semantics, operationalizing truth, constructs, or concepts. We can talk / type for hours on philosophy, epistemology, and metaphysics. People have been doing that for millennium.

At the end of the day, I was just saying I hope we can be civil, respectful, and focus on the art even if that might be a bit crazy of a concept in a modern, keyboard-driven society.

There's some interesting research out published in some academic journals about 2-3 years ago discussing how the comments sections of major newspapers or online periodicals change when anonymous responses aren't allowed. :)

I forgot to mention the research that shows emojis are often ineffective at demonstrating sarcasm and emotional intent :)

First off let me say it is cool technically. But it is absolutely idiotic to create this piece as an ode to the famous painting of "The Last Supper". It is both insulting to the painter, Leonardo da Vinci as well as to any Christian out there that is truly Christian. Pictures, Paintings, Art all convey a message. It isn't just there to look pretty. It is meant to illicit a response, emotionally or intellectually. So here is a picture that is supposed to give homage to the original and the Original Painting conveyed a message of light. For Christ is all good. And here we have the Emperor who is dark. And is all evil. There is nothing admirable about this and to suggest that it is, is absolute insanity. And your message is clear. That Jesus Christ & Emperor Palpatine are equal in your eyes.

My thoughts are that it's a nice result but technically the image is a pass but not out-of-this-world. The set is so obviously CGI and as you spend more than a few moments looking across the image you begin to notice more disappointing traits of this.

"Steve didn't want the CGI background to look too smooth and fake, so he added some texture to the surfaces in Photoshop to mimic a real world environment"

This is the part that falls short the most in my opinion as the texture looks flat and unfortunately fake. Another area which bugs me are the highlights on the top of the throne and I think the image may have been better with a greater distance between table and background.

As in The Last Supper I think I want to see the legs and feet of the Stormtroopers, Vader etc. Not sure. I do like the lighting and overall mood of the image however.

Can anyone explain the toy R2D2?

Looking again it annoys me that the Stormtroopers are so perfectly polished and brand new looking!

I am a photographer and huge Star Wars fan. I don't know if Steve Brown had this in mind, but Emperor Palpatine speaks in Revenge Of The Sith (co-incidentally I watched it again last week!) about being able to use The Force to be immortal. There's also Star Wars comics and novels that pick up the story after Return Of The Jedi, and The Emperor uses his powers to resurrect himself after his death. Obviously Darth Vader is The Emperors apprentice who turned on him which fits into the Judas role.

Clearly there's always going to be a risk with doing an ode to anything religious. But I can see what's been done here and I think it's been done well. It's obviously not meant to be taken too literally.

Also with regard to people saying it's not appropriate to use the 'evil' characters and compare them to Jesus and his disciples, from a practical point of view, shooting this image with the Sith (the bad guys - so to speak), is much easier than doing it with The Jedi (the good guys) because as you can see, almost all of their faces are covered. They put their masks on and instantly look exactly like the characters in the film. The only face you have to worry about is Palpatine. Trying to do it with Jedi's would have required a lot of look-alikes and would almost certainly been detrimental to the final image and no doubt added a lot more cost.