In this detailed series of articles and videos from Matt Porwoll at AbelCine called "Behind the Lens", viewers will get a chance to compare specs and review footage captured using a number of popular zoom lenses. From the nearly $30,000 Fujinon Cabrio 19-90mm to a modest Canon 17-55mm, find out what Matt discovers about each of the lenses he reviews. This is the first video in the series, that covers the Fujinon MK 18-55mm Zoom.

Having a zoom lens on your camera when doing documentary work can be pivotal for capturing footage quickly, and getting a variety of shot types when time, budget, and gear are limited. Not everyone's workflow will be the same, but for those one-man crews who find themselves trying to reduce the amount of gear they carry around, or perhaps are trying to save on budget, a cheap zoom lens might be more helpful in the end than an expensive prime.

While these tests cover mostly technical aspects of the lenses, (and we all know it takes more than a fast lens to make a good video or film!) Matt quickly points out in his introductory article that understanding those aspects simply allow him to make more informed creative choices.

We purposely set out to not pit one lens against another, but rather to look at how each lens reacts in various situations. At the end of the day, every lens we tested is a lens I would use. Each has its purpose and place, and it’s up to us to determine when and where they shine.

Using the same series of shooting scenarios and the same host camera (a Sony FS7), Matt was able to review footage and really figure out what strengths and weaknesses each lens showed. While he did not intend to make a direct comparison of one lens to the next, it made sense to create a table that included a number of important tech specs on each lens. Click on the image below to view full size. 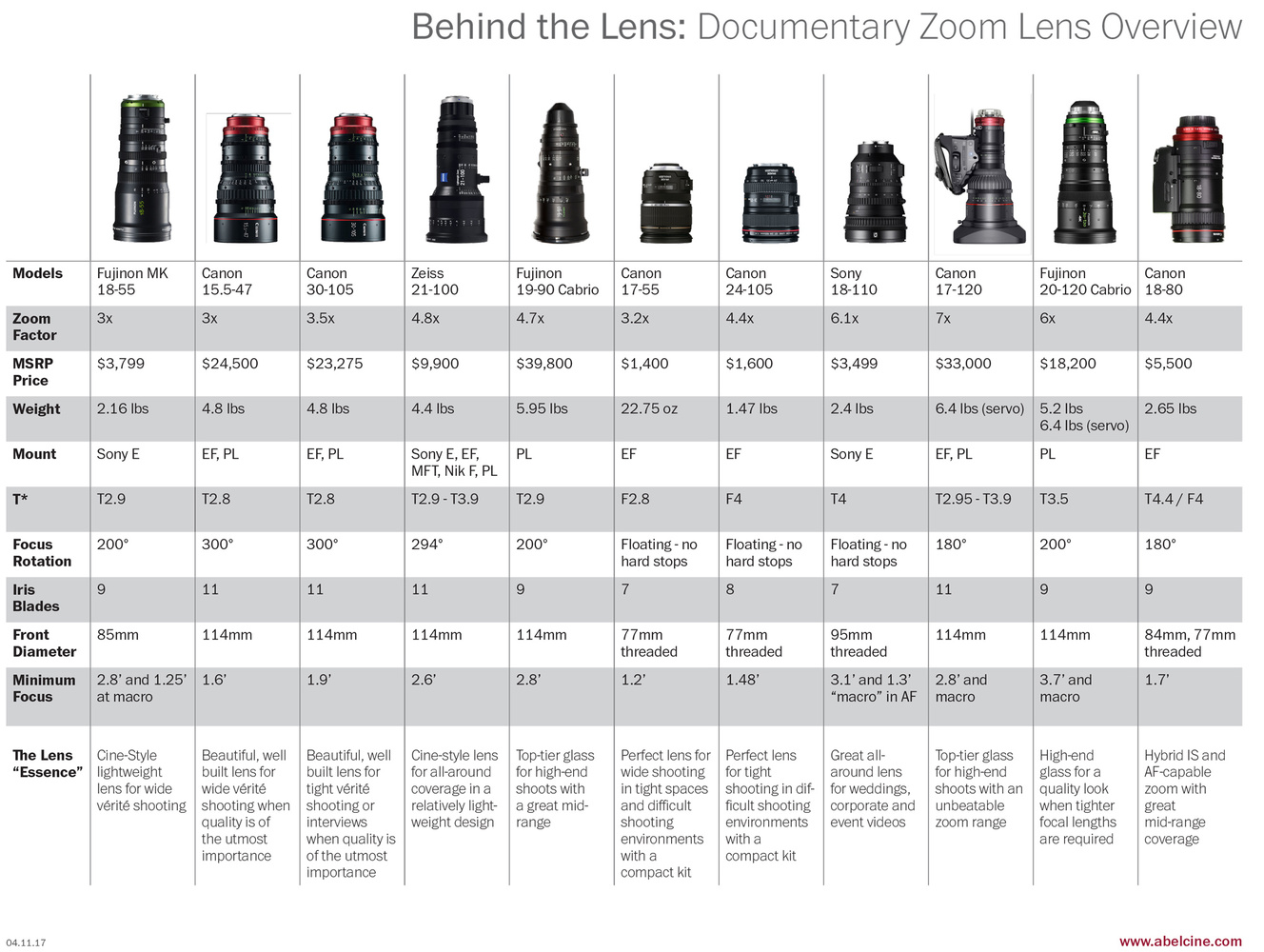 The points covered in Matt's review articles include the following:

As of the writing of this article, he has posted five review videos, which I'll include below.

More videos are supposedly coming out every 1-2 weeks. If you like this series, then be sure to check out Matt's articles over at the AbelCine blog for the next set of reviews.

My personal favorite of the bunch is the Canon 17-120. I just finished up a series with the Fuji 19-90 and it's brother the 85-300, and the servos were unreliable. They were old and beat, though, production-owned instead of rented, so that probably had something to do with it. One was dented so badly that you couldn't even hope to put a screw-on filter on it.