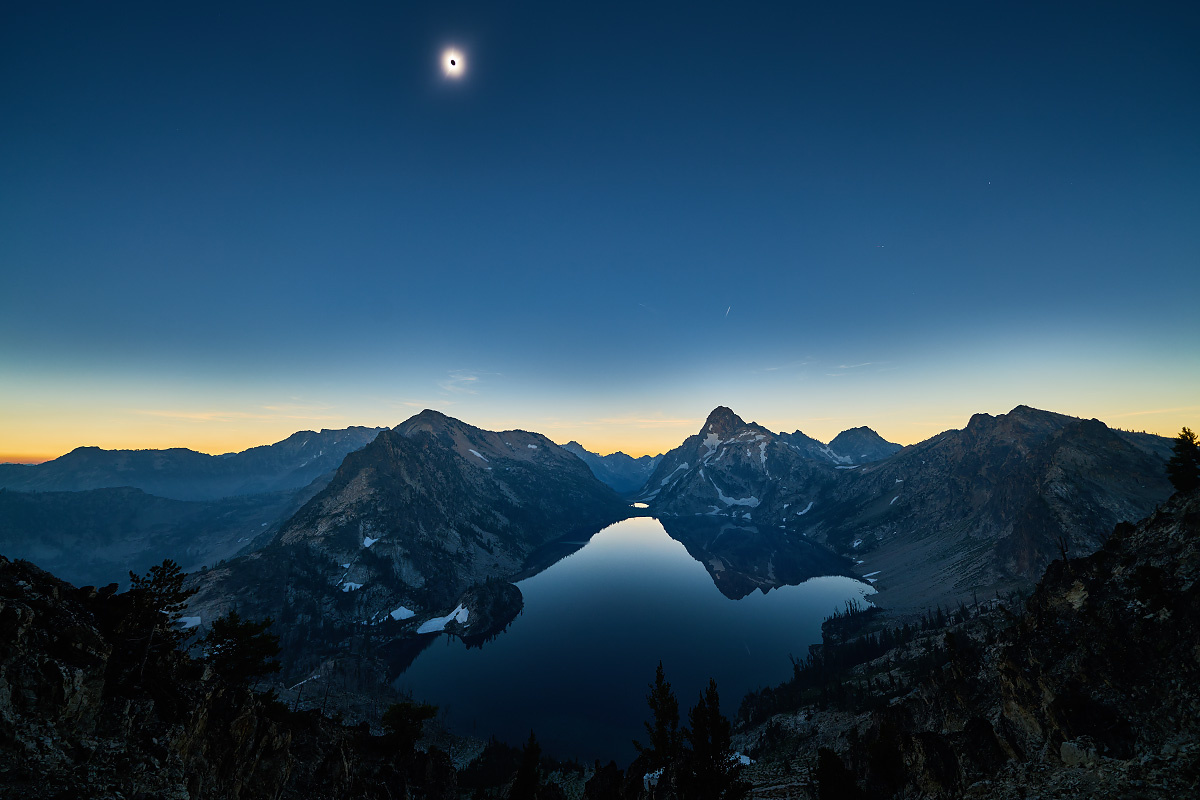 The solar eclipse of August 2017 put the path of totality directly over a remote wilderness corner of Idaho. Promised by over a year's research on the internet to provide both a fantastic viewpoint, and a bit of privacy, we got the former but not the latter. Over 200 other hikers an campers had the same idea of witnessing this spectacular phenomenon from around Sawtooth and Alpine lakes. Nevertheless, the sight was absolutely jaw-dropping and the experience was one that I will cherish as a highlight of my life. This image is a single exposure, processed minimally to accurately reproduce the scene as it was viewed with the naked eye.

I might crop in a little on the left.

We had planned this shot "blind", using Google Earth and Sun Surveyor to predict how high above the horizon the sun would be during the eclipse, hoping that 12mm would be wide enough for a vertical viewing angle to include the near edge of the lake, while also still including enough sky above the sun as well. In retrospect, we shouldn't have settled for the Sony 12-24, we should have rented the Canon 11-24, and then this shot would have been a bit more successful as a 4:5 aspect ratio for sure, with just a bit more added to the top and bottom, and a bit less on both the left and right side.

Maybe this is too critical but for me the biggest take away when I see this image is subject.

If you take away the eclipse happening, there isn't anything really special about this shot. Not that it isn't a good composition, grand vista, and just generally a cool place. But crop out the eclipse and it becomes something very different.

With that in mind, it leads my me to focus on this special moment. This shot is interesting because of the eclipse, because of what is happening. Not necessarily the shot itself. So it leads me to wanting the eclipse to be more emphasized. I want the focus of the image to be the eclipse. It doesn't have to be a telephoto photo. It could be half the vista covered in shadow, more of the frame taken up by the eclipse, etc

Obviously we lose a lot to the resizing, so it's possible it's way more obvious in larger scale. It just feels so small here. I hope that's a decent explanation into thought process.

I rated it a 3, probably 3.5 if I could. Obviously there was some planning and preparation to take this so it does classify as a 4. I just personally wish I could see the image and immediately know it's the eclipse, where as in this scaled version it felt like I was looking around for it.

Thanks for your honesty, Alex.

Honestly, I didn't even know if this would succeed as a single image. It was originally a part of a 36-hour timelapse, I pulled a frame and gave it a chance! https://youtu.be/l-UOryF4J1Q

...But, you're right, you've inspired me to see just how some of the other frames might look, right as the light is shifting across the landscape a bit more dynamically. I'm excited to see if something turns out!

The timelapse is great! And obviously really puts the event into much better perspective than a single frame. Loved watching it!

I realize what I said may be harsh, but I have to constantly remind myself that some photos will just be special to me and to try to remove myself from evaluating if a photo is good or not. Because sometimes I find them special and other people will never see the same thing you do.

Honestly, as someone who has been shooting landscapes in earnest for 15 years now, this is EXACTLY what I am currently dealing with in my efforts to take my landscape photography to the next level.

Indeed, some photos will just be special to the capturer. Indeed, removing oneself from the evaluation process can be highly valuable, as difficult (and counterintuitive to the whole artistic process) as that may be.

I have lost count of how many of my own favorite photos are relatively un-liked by most, and how many others' favorites are not particularly striking to myself.

I'm working to understand exactly what goes into this phenomenon. And thus far, I have found that it is extremely helpful to try, while still in the field, to disjoin oneself from the emotional responses which are actively occurring as you view the scene, before reviewing what was captured on the camera LCD screen.

In other words: If, while shooting, you can take a moment to clear your mind and pretend that it is a month or two later and you are sitting in your office reviewing the photo, even as if it were captured by someone else and you had never witnessed the moment at all, ...you may quickly be able to perceive the minor corrections which ought to be made in the field, resulting in an image that truly does justice to the moment being witnessed.

Then, even for those viewers who have no "mental EXIF data" stored in their own memories to revive a stored emotion which adds value and impact, the image can still "stand on its own two feet".

That right there is a realization that has taken me at least 10 years to formulate, and is one of the focal points (no pun intended) of a book I've begun writing on the subject during the last couple years.

It is, in fact, feedback and conversations like this which keep the creative spirit alive.

I too struggle with the same thing. The photos I have that tend to do the "best" are ones I don't consider close to my best... It can be a pain in the ass sometimes.

I get some incredible light, spend a lot of time figuring out the edit etc and people don't see what I see. Then I post a photo I barely worked on, that is compositionaly worse, has less standard landscape "rules," yet does way better in popularity. It's a struggle.

Sometimes I have to remind myself to take my head out of the camera and just enjoy the scene as well. Which is seemingly the opposite of what you're talking about, which I also try to do!