Broncolor announced two battery-powered strobes today. Coming in 400-joule and 800-joule variants, offering flash durations of as little as 1/19,000s, and in a similar power option, the new Siros L strobes are clearly aimed at the 500-watt Profoto B1 with nearly identical features in all but one area, depending on what's most important to you.

For those that don't remember their high school physics classes, you can change out "joules" (or, more accurately, "joules/second") for "watts" (or, more accurately, "watt-seconds") -- the unit of choice for measuring most flash systems' power. In this case, Broncolor has two options, increasing the maximum, high-end, battery-powered strobe wattage to 800 Ws for those that need all the power they can get outdoors or elsewhere in the field. You'll trade that power for size, weight, and battery life when you notice the 800 J Siros L is 1.5 in. longer, 1.5 lbs heavier, and features half the battery life compared to the 400 J's 440 full-power flashes. The good news is that this is because, as you may have guessed, the Siros L units conveniently use the same battery.

Overall, the Siros L is generously appointed for its class (though that distinction has yet to hold based on the still unreleased price of the units). The 800 J still features as many full-power pops as Profoto's "only" 500-Ws B1 and manages to maintain a relatively streamlined form in comparison to the B1's slightly odd battery bulge. The batteries also charge in 70 or 75 minutes depending on what literature you read, which is a hair over Profoto's one-hour charge time with the optional quick charger, but nearly twice as fast as with their included charger.

Both models feature full compatibility with each respective company's lighting modifiers and wireless technologies, but Broncolor adds a nice touch with their multi-color LED identifiers that help tell each unit apart when adjusting them from Broncolor's lighting control app. 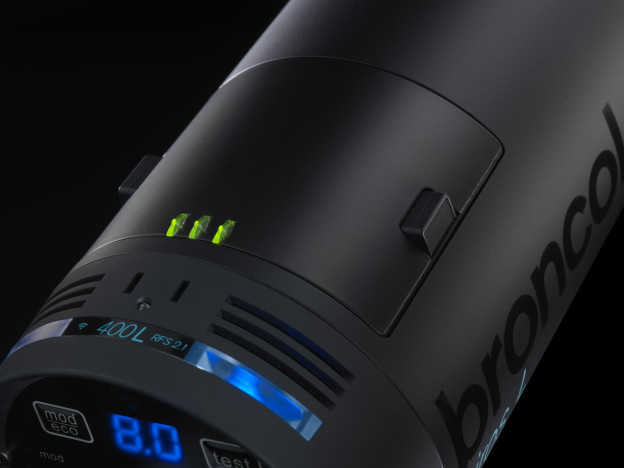 Profoto and Broncolor continue this dance around features throughout the multitude of considerations any photographer would make. For those who hand-hold their strobes on occasion, every pound counts. That's where Profoto's 6.1-pound battery-included weight will be preferable compared to the 400 J's more than eight pounds and the 800 J's 9.5 pounds of heft, despite all of the units being very close in overall size. The 500-Ws B1 offers slightly more power than the 400 J, but only half the battery performance. Meanwhile, the 800 J offers a healthy increase in power in exchange for dropping to "just" 220 full-power flash pops -- identical to the life the B1 will show. So you may have to make a choice between weight and battery life.

But when you begin looking into other features, the lack of mention of high-speed flash sync in any of Broncolor's literature is slightly alarming for those shooting at large apertures or in broad daylight, for which the 800 J is obviously specifically built. I'm hoping this is an oversight of the marketing department rather than the engineering department.

The Siros L units will be available July 2016, but without word on U.S. pricing, it's still hard to make a definitive statement or judgment with respect to which model wins out on paper. Thankfully, we know that the price in Switzerland will be 1,998 CHF for the 400 J and 2,349 CHF for the 800 J, which figures very closely to the U.S. dollar.

The 400 J and 800 J strobes are now available for pre-order from B&H for $2,053.10 and $2,347.10, respectively, with an estimated ship date of July 10th. For just about twice the price, you can get a kit with two lights each, a softbox with adapter ring, a silver/black umbrella, two batteries, a single charger, and a backpack to hold it all. That kit comes is available for boht the 400 J and 800 J models.

B&H already has them listed on their site with pricing.

Do they fix the B1s biggest flaw??? can you plug them in to AC power and use them while the battery charges?

That's one reason I use my B2s far more than the B1.

OOohhhh... That does make more sense. I was wondering in what world a Broncolor product would be cheaper than Profoto.

What is amazing is how close the prices still are... Not too bad...

Sean, I feel like this is a common misconception nowadays. May have been true in the past. But let's take a look at current prices. (For comparison's sake, I tried to find the closest products in each of their lineups)

I don't own Broncolor, but I'm trying to decide between Profoto and Broncolor for my next setup and I kept hearing that Broncolor was "astronomical" in prices, but then I decided to take a look myself. It's not what people claim :)

I second that one. I use my B1's for headshots but am starting to consider going Flex Kit because I don't want to invest another $1,000 for batteries and chargers only to continue mixing in speedlights.

Only downside I can really see is they are even heavier than Profoto B1's which are already top heavy as it is. Also I hate the way Broncolor modifiers mount compared to Profoto.

Ditto. Once you're vested in a lighting system, switching brands isn't very feasible. I don't see anyone dumping their entire Profoto system for Broncolor because these are slightly more powerful, or slightly cheaper. Once you have a dozen speedrings, modifiers, triggers, batteries, chargers, and strobes, you're probably in with them for life.

The fact that this comes with a sync cord, but as far as I can see NO wireless remote is quite telling it's own story about how a company and it's engineers really tick. :)

So no HSS and no TTL. This product is actually - besides it's design - not at all in comparison to a Profoto B1 but rather a Dynalite Baja. Heck, even the Interfit S1 has HSS and TTL. Perhaps the Jinbei HD-II 600 for around 600 bucks would be comparable, but then that also has it's kind of HSS.

Too little, too late, Broncolor..

Does the Profoto B1 come with a remote? I thought you had to buy it separately

You do have to buy it separate, it costs around $411 here in the states.

I know I'm being nitpicky and critical, but here goes - joules = Watt-seconds (watts times seconds). The author is correct that joules/seconds directly translates to watts, but after that it's wrong. 'Ws' is the 'standard', not just 'watts'. Every time he says 'watts' he means 'watt-seconds'. The correct abbreviation is 'Ws', not 'w/s' or 'W/s', as both those mean that seconds is in the denominator.

I knew this would come up! Ha. Everyone just says, "Watts," even though that's incorrect. But that's why I used it afterwards. I did change it regardless because you're right, it should stick with the proper one. And I added a note earlier to make it more clear. Thanks ;-)

I have this light and it is wonderful. A lot of power (600w), long lasting battery, HSS, TTL, wireless trigger built and very low cost. http://www.adorama.com/FPLFX600TBC.html

Left out of the conversation is Priolite. More bang for the buck, Hi-Sync, AC power, Higher Output and right now they are offering a 2nd battery for free with purchase on certain models.

Cons: No AC, no HSS, no TTL(not essential but nice to have), much heavier, Bron RFS remote sucks

When B1 first introduced it has already had all the feature a photographer would want (except for the lack of AC), it really shows how thoughtful Profoto engineers are when they are working on a product. In location lighting department there's always compromise and I applaue team Profoto for making such a long lasting product and getting every bit of detail right.

Someone introduced me to it last week but it's never in stock at Adoroma!

According to Broncolor it does support HHS but only with third party triggers. From the You Tube video....

broncolor8 hours ago
+Mark Beaumont Siros L supports HS (similar to HyperSync), which allows you to shoot with sync speed up to 1/8000 s but it can only be used with third party triggers for the moment. The broncolor RFS 2.1 transmitter does not yet support HS.

The best of this whole article is that it just means a profoto 1000 Ws new updated head should be in the works!!! Like many have stated once you choose a lighting system it is just impossible to switch to a whole different company. Profoto just needs to make a HSS remote for Sony cameras and life will be great.