From time-lapse photography to video, many photographers need more battery power than their camera system can adequately hold on board. Whether it’s due to weight of the system creating three-axis time-lapse, the size of the camera with a grip, or the need for uninterrupted shooting, there is an answer for those looking to create images and video: the Case Relay from Tether Tools.

Case Relay is basically an answer to the limits of an onboard battery system for nearly any camera. Tether Tools has created a very quick and easy system that allows photographers to have uninterrupted shooting out of their equipment even when swapping a used battery and therefore never missing a moment. Though DIY creators have been hacking their cameras for a number of years, the Case Relay answers that approach with a quick and easy way to extend your battery power indefinitely. 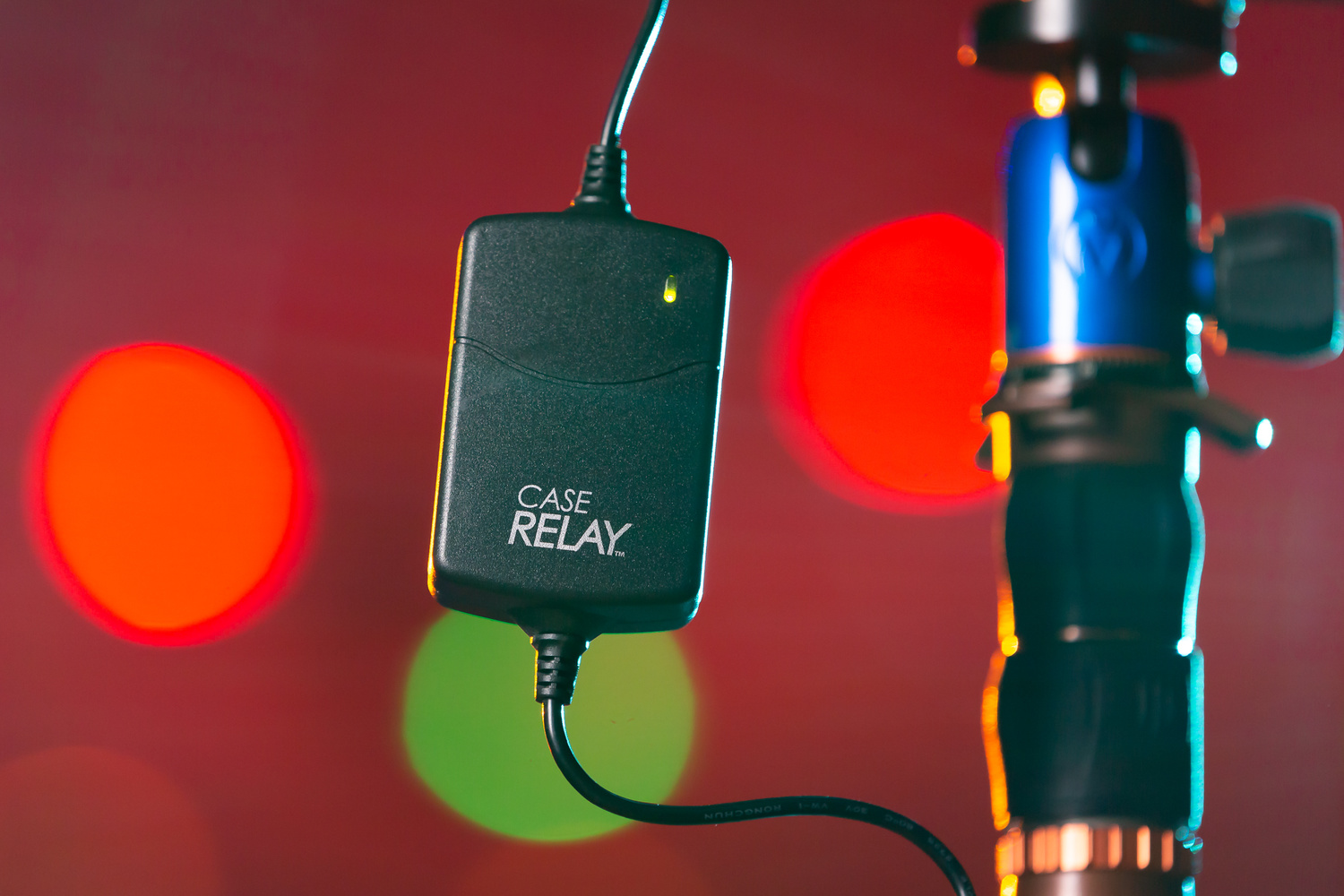 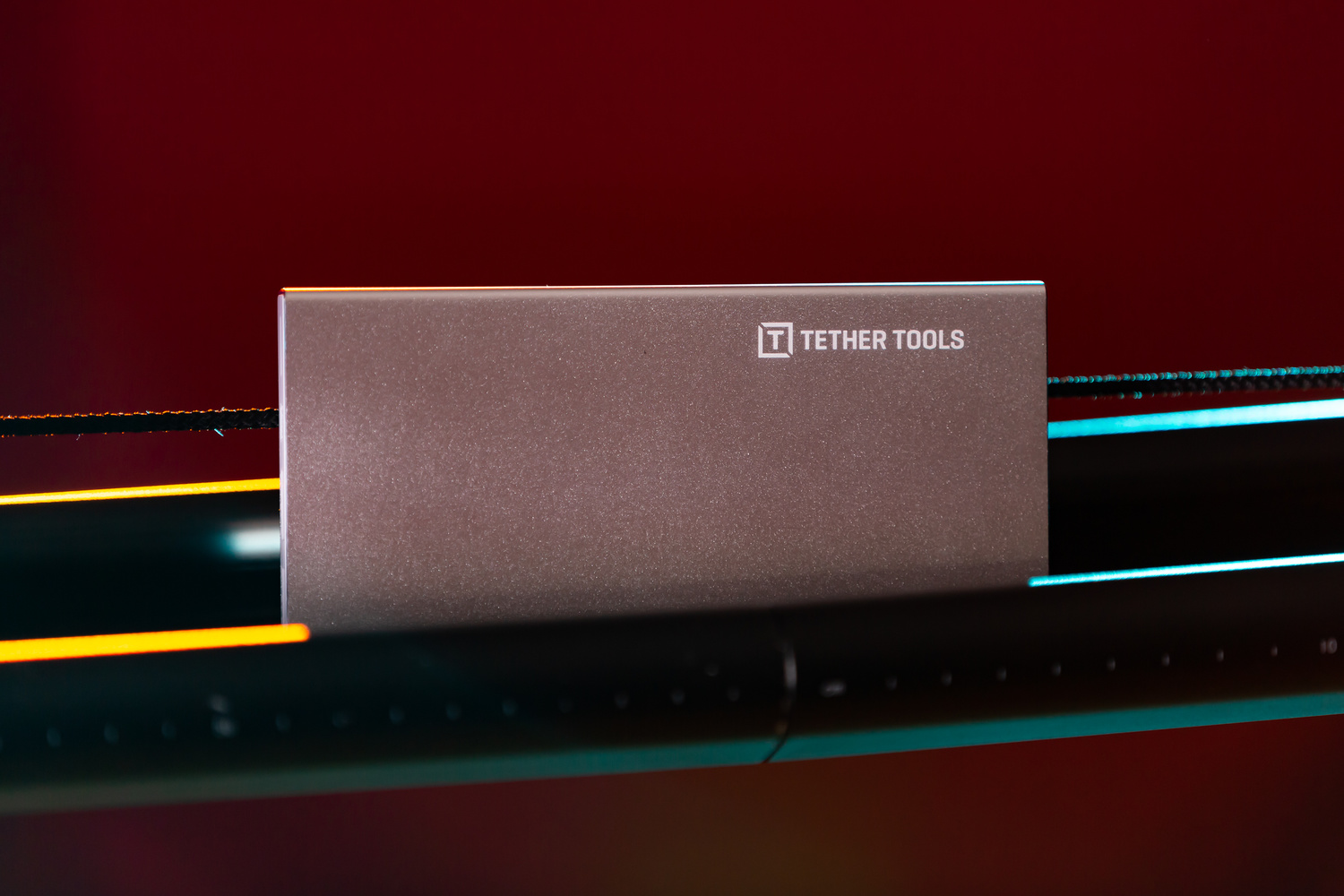 The final part of the system is the Tether Tools Rock Solid External Battery, which is a 10,000 mAh battery pack with two USB type-A 5V outputs with one offering a 2.1A output and the other offering a 1A output. When shooting, you’ll primarily connect the 2.1A output to the relay, and you could potentially charge another piece of kit at the same time. The battery pack is solid and is in a slick form factor that takes up very little space and has no buttons to accidentally press and leave on while in your bag. 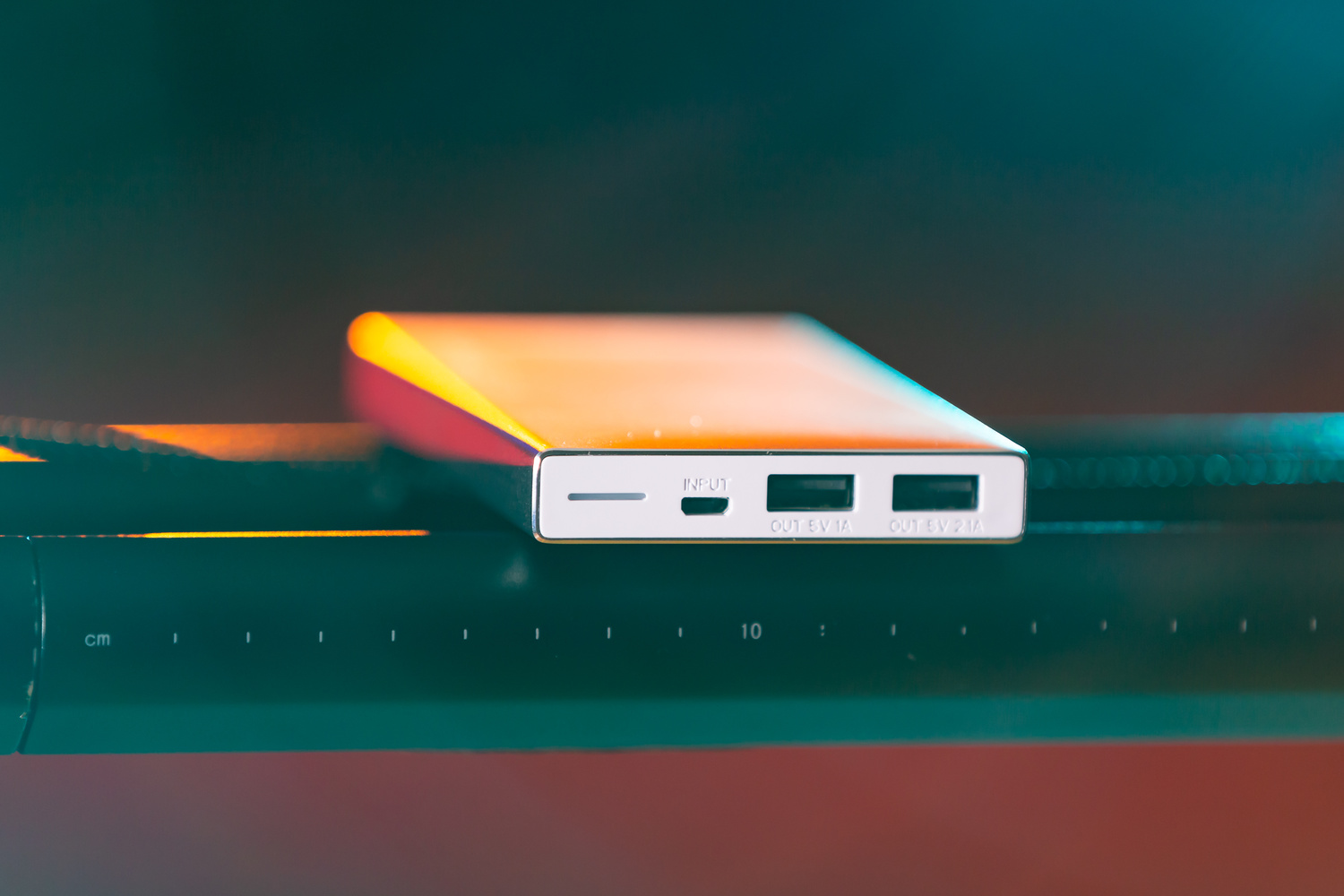 The entire system links together seamlessly and when connected together in the sequence dictated in the instructions, worked flawlessly. The Case Relay and external battery pack powered through continuously for over 1,000 15-second images in 40-degree weather without any issues and still having power in the external Tether Tools Rock Solid External Battery Pack. The battery pack light was orange, which meant that there was still at least 35 percent of the battery left. Normally, I would have ran out of power with a gripped 5D Mark III after about 600 images in similar conditions. Since most of my time-lapses are at most about 500 images, I have at least two days' worth of shooting on one battery pack rather than looking to recharge batteries between shoots or carrying extra batteries. For understanding, I’m usually shooting with three gripped cameras at the same time for time-lapse and static imagery and carrying about 12 batteries in my kit so I have backups.

You aren’t limited to using the Tether Tools Rock Solid External Battery Pack, as you can potentially use any other 5V 2.1A output external battery to connect to the system or use the AC Wall Adapter for unlimited power. I do like that I can’t accidentally turn on the Tether Tools Rock Solid External Battery Pack, which I have done with other battery packs when traveling, and they’ve been drained when I arrived at my destination. What this also means is that if you already have an external battery pack to charge your mobile devices, you already have power for the kit, and with a Case Relay and DC Camera Coupler, you have a whole system that can power your kit longer than most camera system’s battery options. 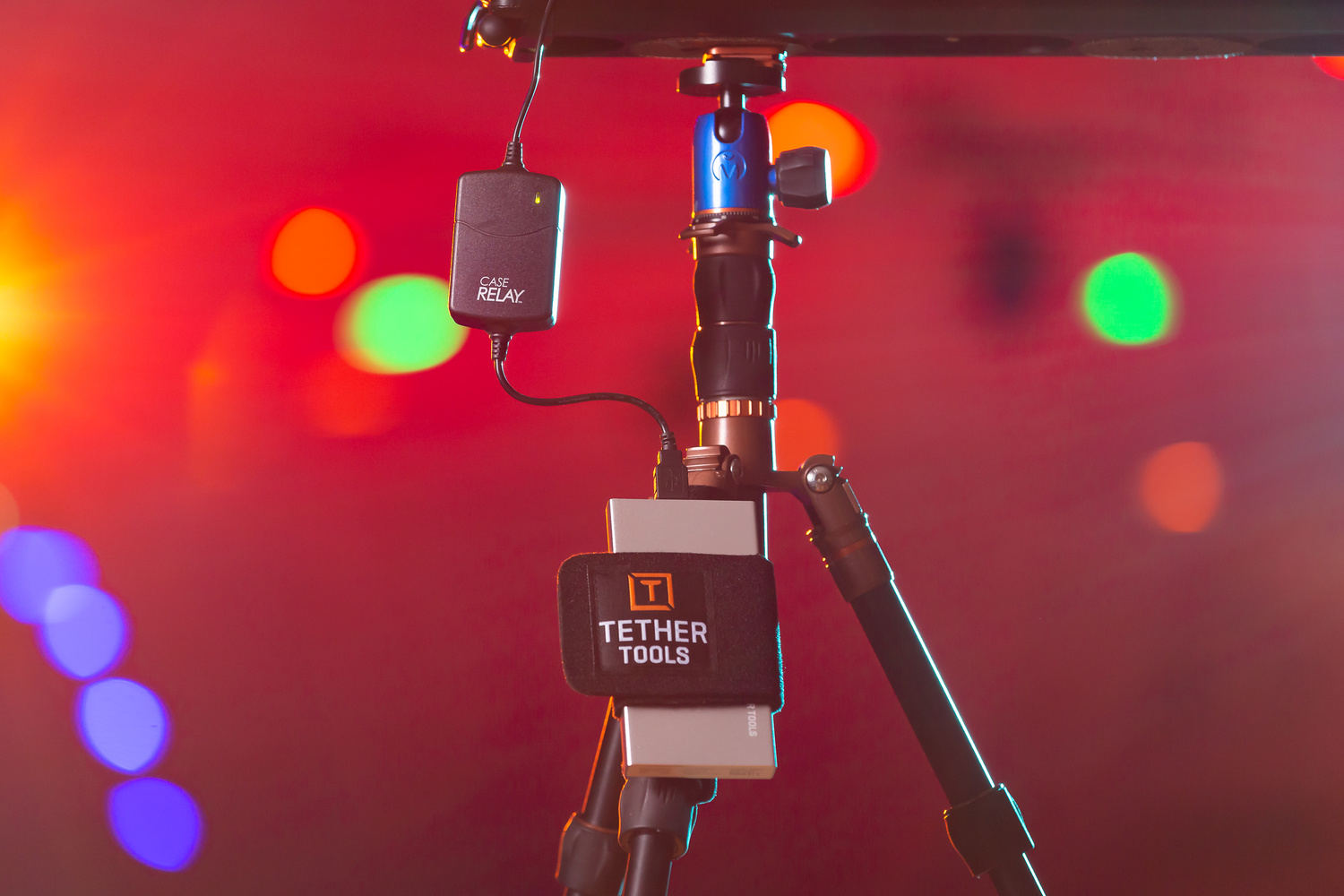 When using the kit I also had the Tether Tools StrapMoore to hold the battery pack in place. The strap is fairly easy to attach to any tripod leg or similar circumference piece of kit, and the neoprene holds the kit very well without any issue of the battery slipping through. There are available extender straps that can be added to the StrapMoore to add additional battery options or hold onto larger circumference objects.

When working with the Case Relay, I noticed that the cable is only long enough for a two-foot slider; otherwise, I would need a Case Relay Extension Cable added to the kit for the four to five foot slider length I normally shoot with. You could attach the kit to the dolly portion of a slider, but you are adding weight to a portion of your equipment you don’t want to accidentally move during imaging. I would simply advise getting the extension cable and have more options on where to place the relay and battery away from the moving portion of your kit. 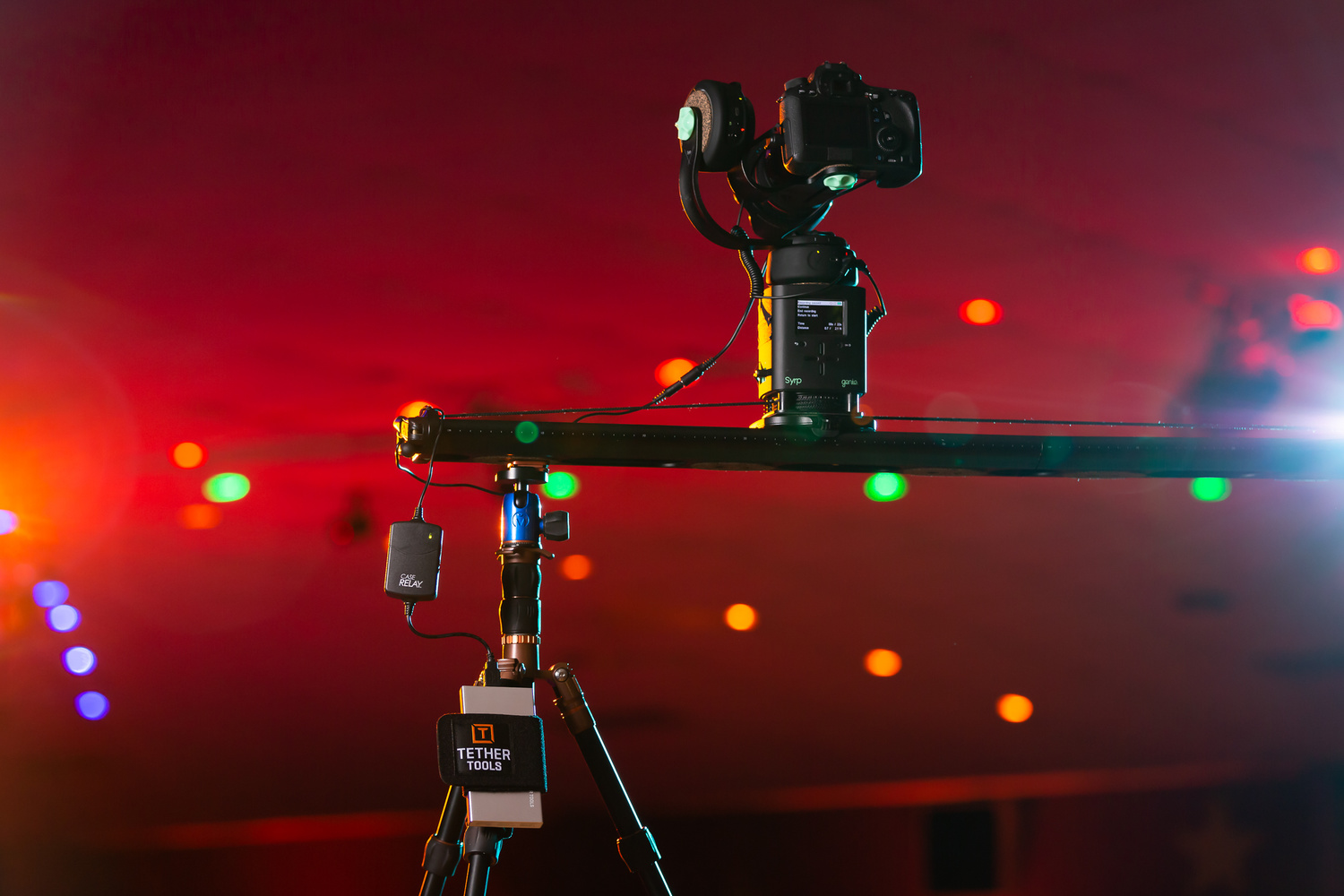 Overall, if you’re shooting time-lapse or video where removing weight from the camera or gaining more battery life is needed, the Case Relay works very well and allows you to dictate the power and shoot duration you want and not by how long one or two batteries may last. You can purchase the Case Relay system here.