New Mexico Night Skies Shows Us the Beauty in Our Stars

I share the same love for New Mexico as Spencer does and highlights in the video above. Before moving out here, I remember a distinct moment where I was driving my rental car all over the state to find something I loved and convince me to move there. At one point, I took an all but abandoned off ramp on I-40, and made a quick turn left. 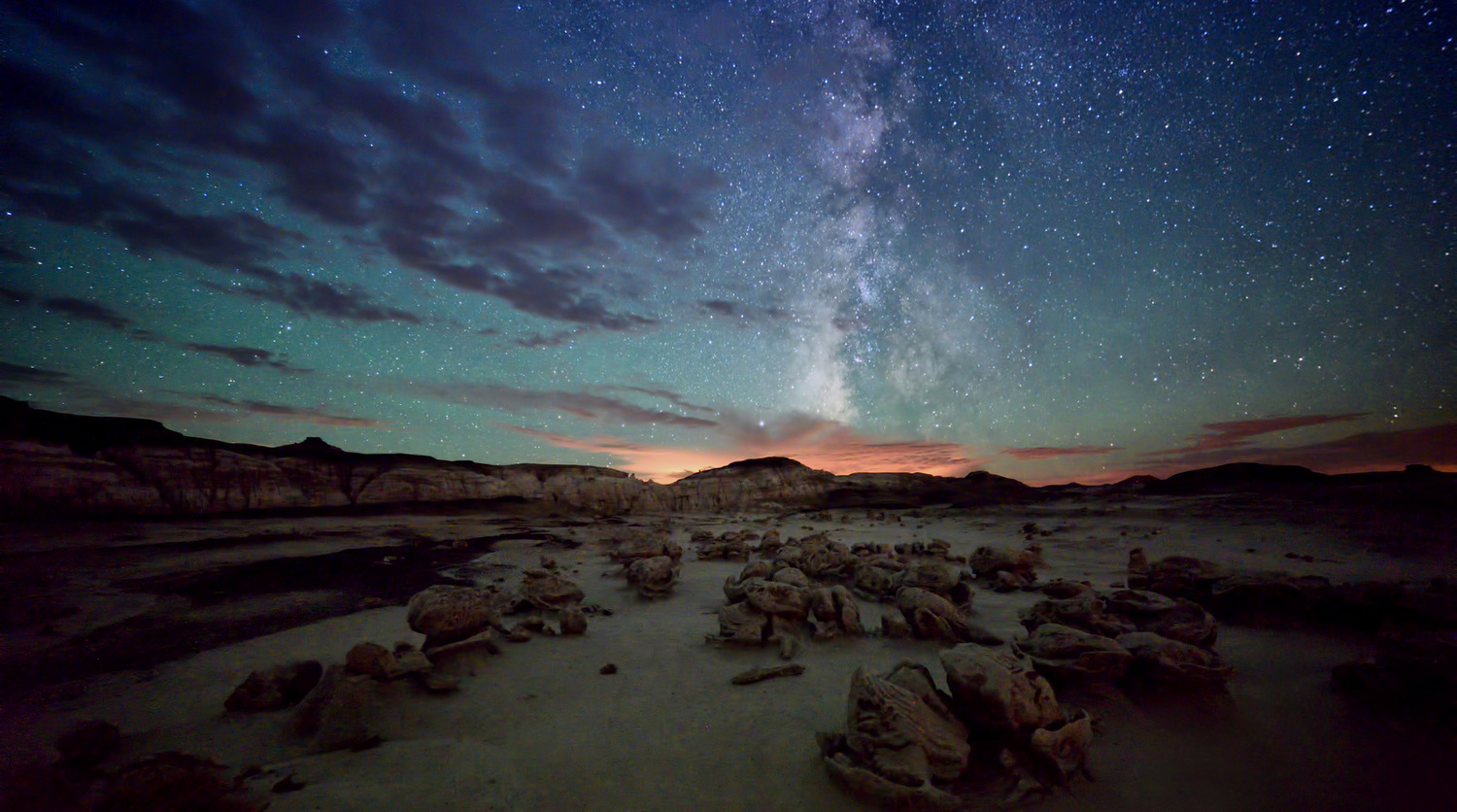 After a mile or two, the paved road got a little bumpy as my sense of adventure extended beyond even the duties of the state's road crew. Then eventually, the road went from a broken paved mosaic to just dirt as I kept on trucking. I figured, I bought the insurance on this rental car, what's a few dings from rocks and other debris?

Finally, after several miles I stopped, and I got out of the car. I looked around, and I shouted “HELLO?” as loud as I could muster. There was no return, except for my echo in the distance. I sat there, looking at the bleakness of nothing extending forever on all sides of me, and realized that I was likely at least 5 miles from any other human being, and that at 26 years old, this was the first time I've ever experienced such somber solitude. I found my love, and moved to Albuquerque, N.M. almost exactly one month later.

After moving to Albuquerque, I eventually met Spencer. An IT technician by day and portrait photographer on the weekends, Spencer was still figuring out the ropes and discovering where he could apply his love for photography. A few months later, he invited me out to take some photos of the stars. 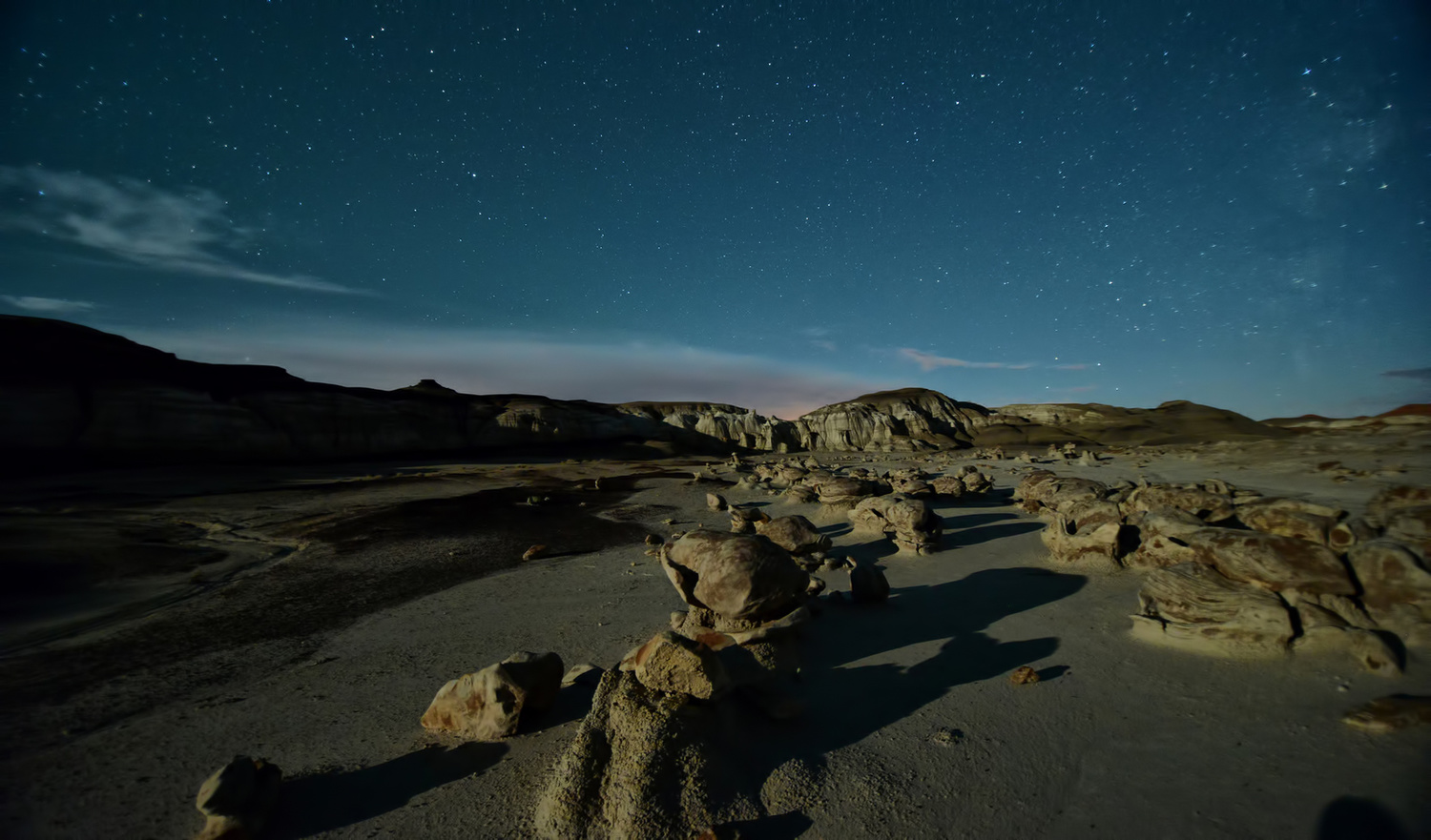 I accepted, solely because I've never done it before, and eventually, we were in route to an old abandoned house an hour or so out of town to rid ourselves of the light pollution in Albuquerque. Now to say I had no idea what I was doing in terms of astrophotography is an understatement, but the beauty contained in the adventure was that Spencer and his friends were still pretty green to it (at the time) as well. We played around, opened our shutters whilst painting using our phone's backlight, and seeing what we'd come up with.

Even back then I was impressed with Spencer's keen eye and ambition to capturing the Milky Way in all its glory. So over the last year and a half, it has been an absolute pleasure to see Spencer's work build and grow into the supremacy that it is now. 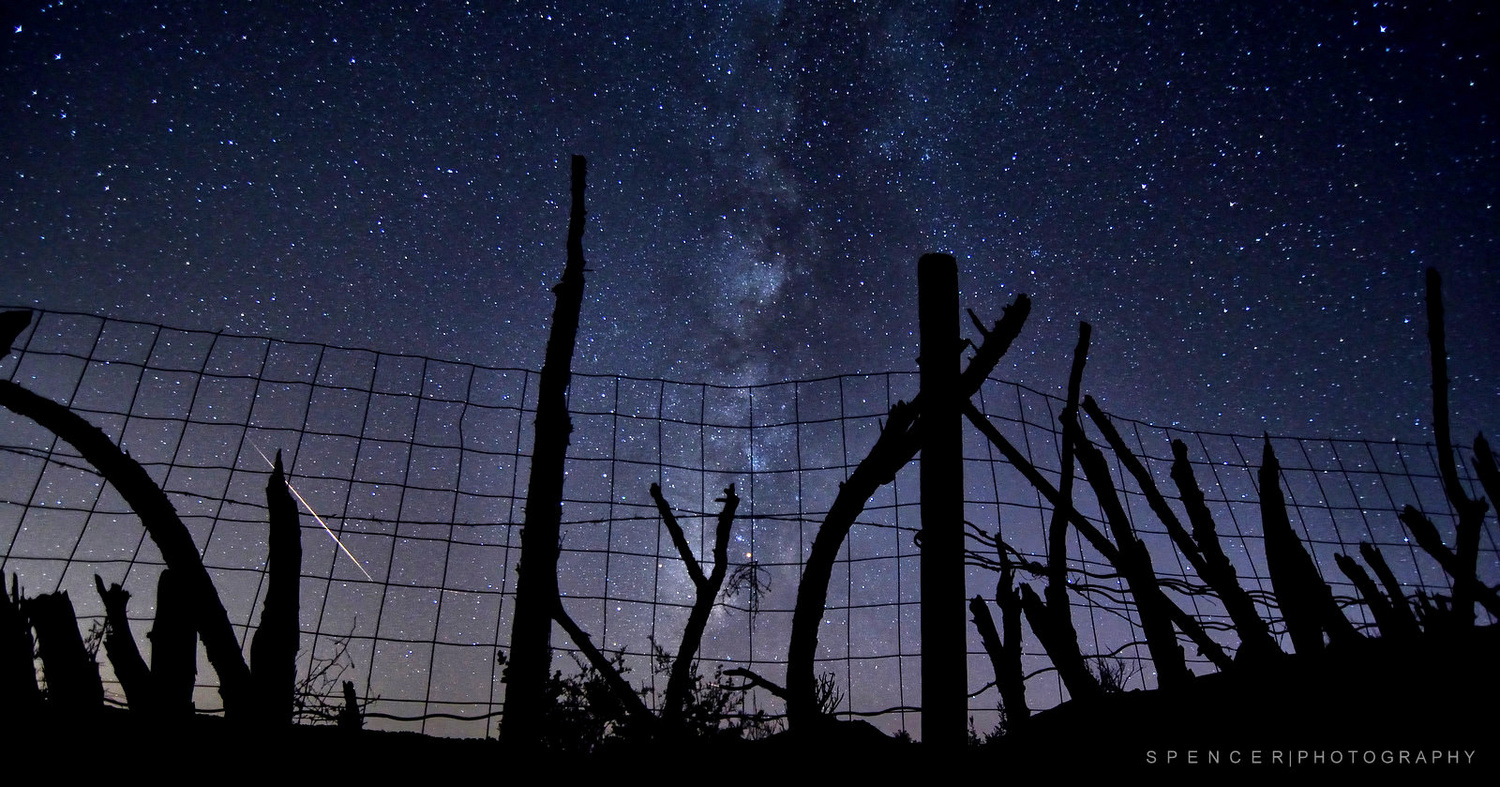 Fast forwarding to modern day, Spencer has released this new video of his adventures in astrophotography. Using a combination of the Nikon D600, D750 and D810 paired with the Nikon 14-24mm and Samyang 14mm f/2.8, Spencer has been able to capture the Milky Way and other star constellations in his work on the outskirts known to many as New Mexico.

Ultimately I like to shoot 450 plus photos and process them at 29 frames per second for a really fluid 15 second result. I found if I process at 25fps or less, the video starts to become choppy. Shooting can take anywhere from an hour plus to three hours depending on the exposure and the available light. For example, if I’m shooting a scene with the moon out, I can get 10 second exposures (or faster) at ISO 2,000, f/2.8. That will yield 6 photos per minute or about 450 photos at 1 hour 20 minutes. If I’m shooting a really dark scene I’ll have to shoot 30 second exposures at ISO 5,000 or 6,400 at f/2.8. To get to my 450 photo mark, I’ll have to shoot for 3 hours plus. Ultimately I prefer to shoot with a little moon to both reduce my shooting time and to accentuate the landscape.

Spencer was also able to supply us with some behind-the-scenes images of the process it took to create this stunning video. Spencer writes:

For the entire clip I used the Nikon D600. I use two lenses; The Samyang 14mm f/2.8 or the Nikon 14-24 f/2.8. I tend to use the Samyang more as it's lighter and super sharp. For my time-lapse rail, I use the Dynamic Perception (DP) Stage One carbon fiber rail, a DP pan-and-tilt unit, a DP controller, a DP battery, and associated mounting hardware. The couple images below show off how I was able to set up the gear used to help create these time-lapse clips. 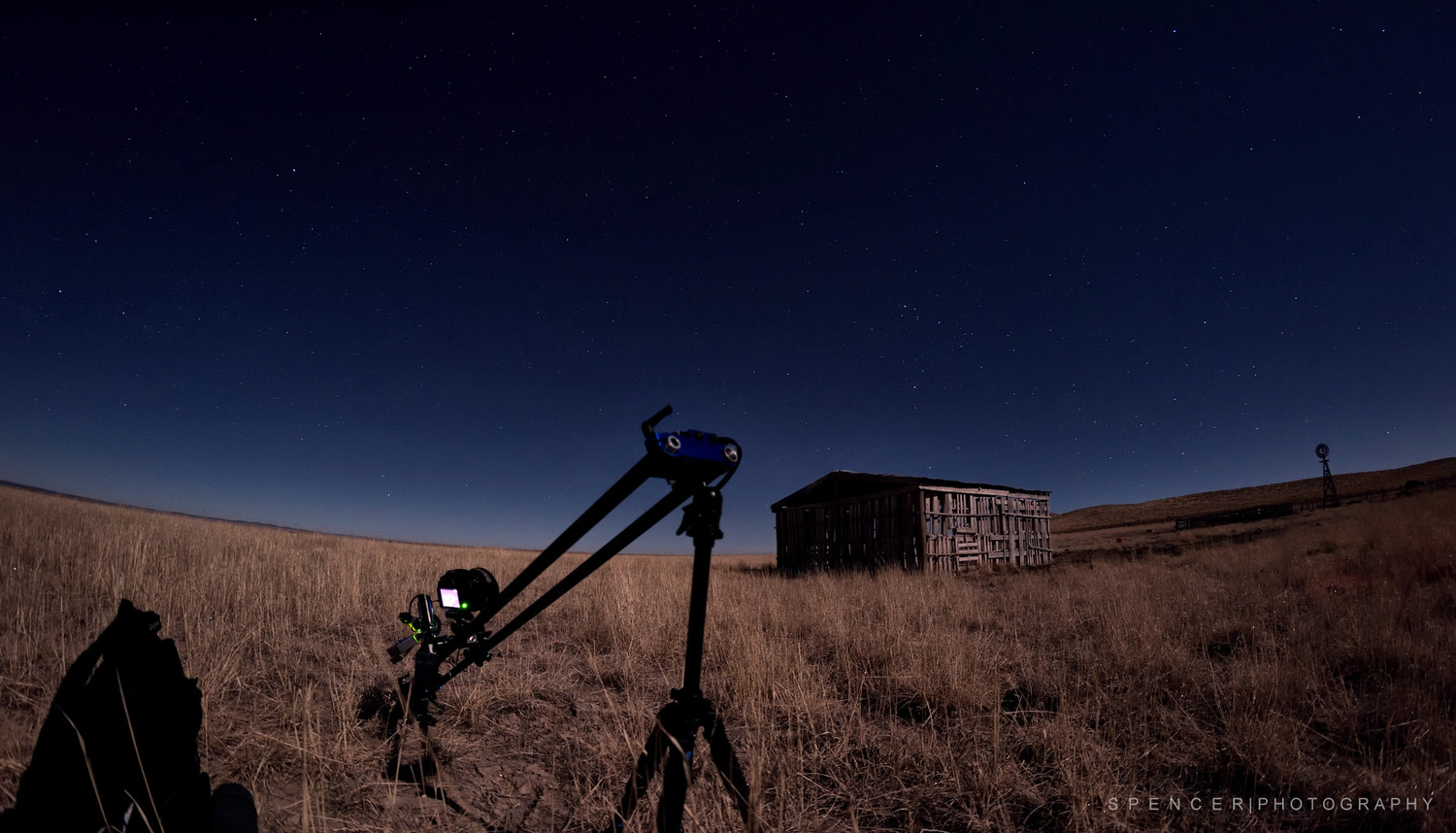 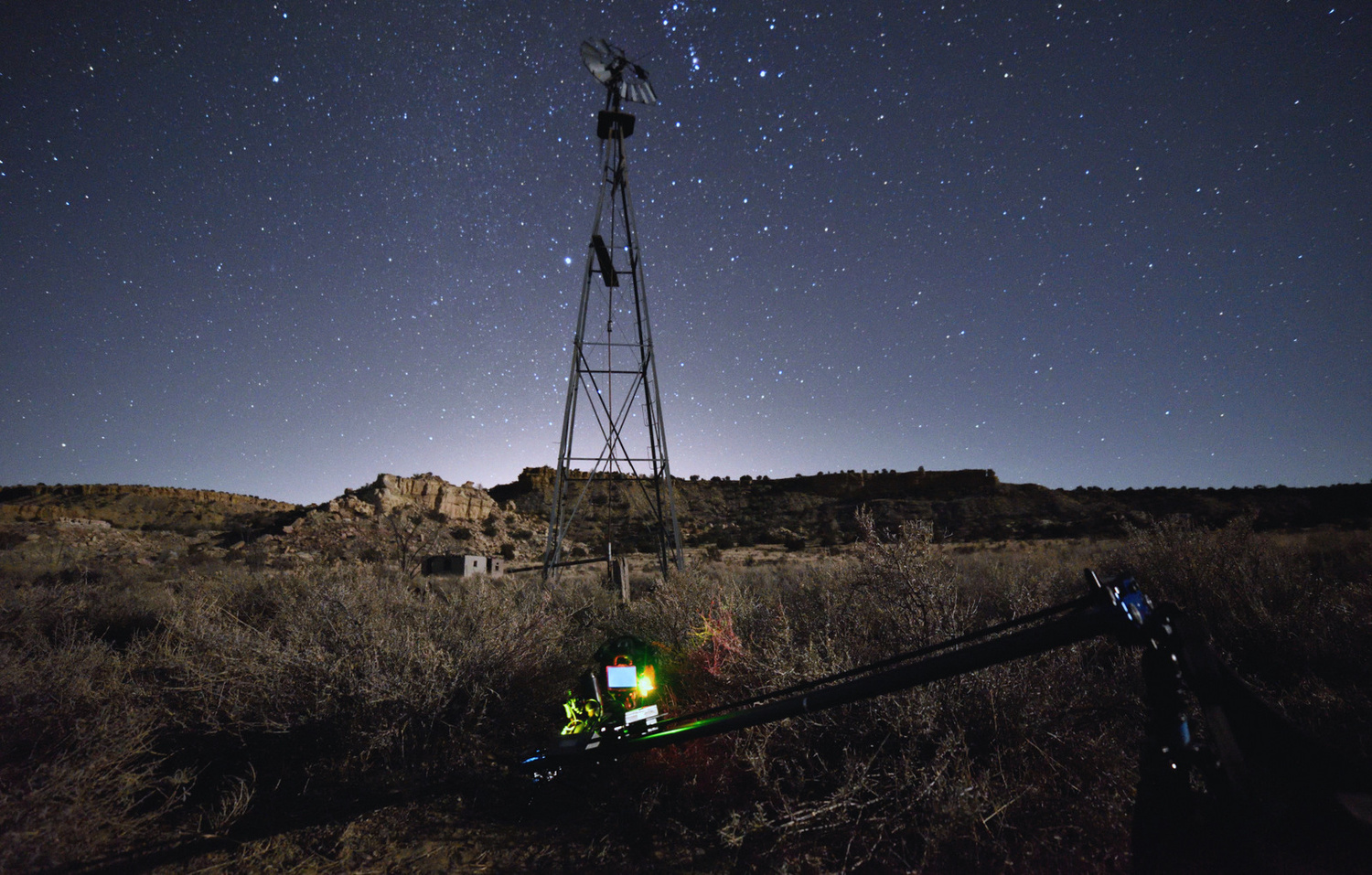 For more information and work by Brian Spencer, be sure to check out his website or Facebook page where he shares the majority of his work.

very nice series, but I woulda shot more of the Bisti!