Getting Started With Camera Drones: How One Small Rig Can Add So Much Production Value

Aerial videos that have been shot by drones have been flooding YouTube for the last few years, especially as the cost and expertise needed to get into it has come down. A birds-eye point of view can add a lot of production value to a video project, but where does one start when looking to get into aerial video? I spoke with Brent Foster who told me about the doors that shooting aerial video can open, as well as the challenges they present.

Brent's background was originally rooted in photojournalism, telling stories through still images as a photographer for The National Post in Toronto, Canada. He began adding video into his stories, and his work moved him to LA, and then eventually to New Delhi, where he was a freelance journalist, providing both video and stills for the likes of The New York Times, TIME.com, and others.

About 4 years ago, Brent moved back to Canada and started to take his video work very seriously. He invested in sliders, lights, and all kinds of gear to add production value to his projects. You might remember him being mentioned on Fstoppers earlier this year, specifically about a documentary produced in Cuba called "Home," and the recent Nikon D810 project, "Every Moment Counts."

Two years ago Brent started learning how to fly his first quadrocopter, a Blade mQX. He even purchased a simulation software to practice flying.

I purchased AeroSim simulation software, which offers multirotors as part of their simulator. Both of those items were well worth it. I crashed the blade copter hundreds of times, and made mistake after mistake flying both the small quad and the simulator. Through that process, I began to get better, and I started to understand how to control the quad in manual orientation, and eventually became more and more confident each flight I took. I spent hours, and hours, and hours learning to fly on these systems.

After getting more comfortable working with an aerial rig, Brent stepped it up and got a larger rig, but he eventually decided that in order to get the best visuals, he should work with a pilot who flies while he operates the camera. 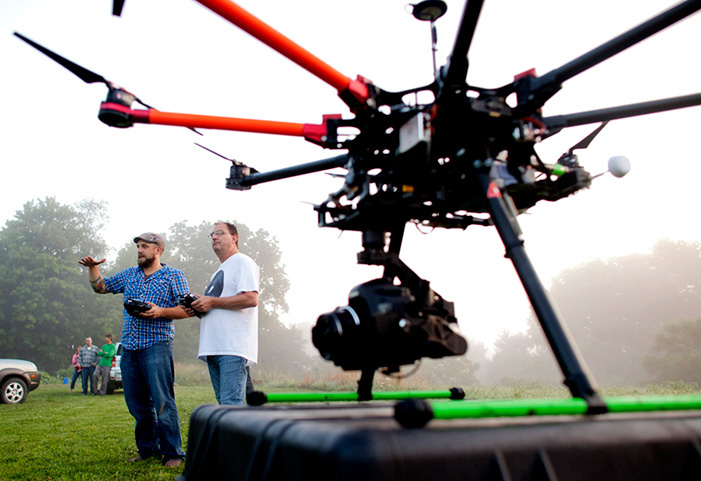 Although I still fly as much as I possibly can, when working on set, Mark (Poissant) and I work as a team to fly and operate the camera. I wouldn’t have it any other way. It allows me to focus on framing and directing the shot, and allows Mark to do what he does best… fly!

The really nice part of flying as a two person team is that I can actually concentrate, and direct the shots that I’m trying to achieve. Our UAV has a video downlink system on it, which allows me to view exactly what the camera’s seeing while Mark flies the UAV “line of sight.”

Below is a video Brent recently produced and shot (along with Mark Poissant as the aerial pilot.)

I asked Brent about the rig that he used in the video above, and how much time setting up a UAV or drone adds to a production day. Brent told me that by having someone on set who is the pilot, they are able to calibrate and troubleshoot the unit so Brent can manage others parts of the production.

We now use an 8 blade multirotor as our main rig, and I also have a DJI Phantom 2 with a GoPro 3+ that I modded with a lens from Rage Cams to take out the fisheye look on the GoPro.

Prepping for a shot, and setting up the UAV is not something you want to rush. That’s when mistakes can happen. We take our time prior to each flight, paying close attention to the battery levels, LED indicators, and constantly checking and re-checking the UAV in between flights.

Adding this kind of production value to a project doesn't come cheap. That said, Brent is able to justify the cost by charging his clients appropriately. I asked him about the cost of these kinds of systems and how he is able to sell clients on adding this to a project. According to Brent, the footage sells itself.

I think the footage and unique angles really sell themselves. Of course, that comes at a cost, but the right type of client understands that. Systems really range from $8,000-$50,000 when getting into flying larger cameras. I’m sure there’s even more of a range than that out there. By the time you add batteries, chargers, controllers, video downlinks, monitors, gimbals, extra parts, etc, things start to add up very quickly. 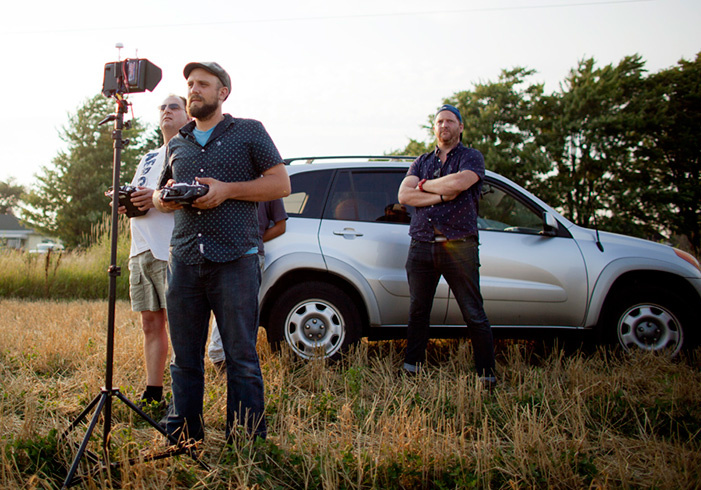 So what do they really add to a project? I wanted Brent to tell me what exactly he is able to accomplish for the cost and time needed to add in a couple of clips from a UAV or drone. With full-size helicopters and planes typically being too expensive, these remote systems can get in small places and capture clips that weren't previously possible.

Having a UAV at our disposal literally takes our production work to a place it’s never been before.

The UAV is another tool in our ability to tell stories, but it’s a powerful one that takes us to new perspectives, and allows us to create shots that we’ve simply never been able to achieve before from both high and low altitudes. It's a slider and crane with almost limitless capabilities.

It also looks really impressive on set. I’d be lying if I didn’t admit that it wows clients, and then amazes them even more when they see the results in their film.

How about legal issues? It seems as though I can't go a week or two without reading an article about someone who flew a drone into something, or there are conflicting reports on where flying one is and isn't legal. Brent explained to me that in Canada, the process isn't all that convoluted.

When we fly commercially in Canada, we have to have a Special Flight Operations Certificate issued by Transport Canada. It’s a process that you apply for, and you need to do so for each Province/Region. Definitely check the legalities of flying UAVs commercially in your country/area as they are very different everywhere, and constantly changing.

We also carry 2 million dollars liability insurance, and all risk insurance on the UAV and camera itself. It’s not cheap, but we feel much more comfortable having both in place. 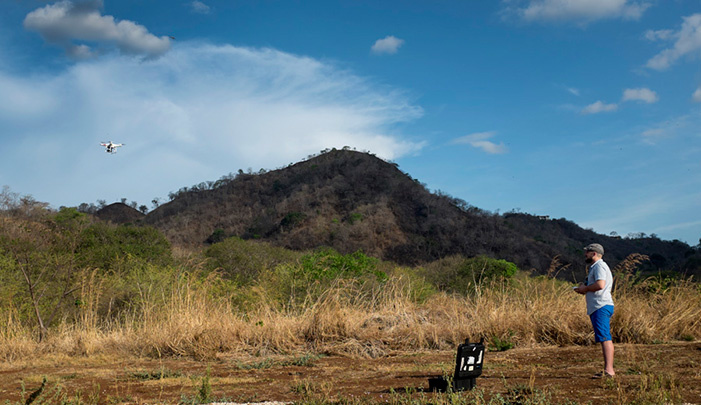 While it would seem that the ideal situation would be to have a pilot working beside the camera operator, there are plenty of people who will want to try it out for themselves. Apart from mounting a GoPro to a Phantom, which arguably seems to be the most popular setup right now, Brent recommend two other units for people wanting to go a little bit bigger and even use a small DSLR.

I would suggest having a look at both the DJI S1000 and the Cinestar line of copters. There are many other companies out there making UAVs, but those would be my two choices for cinema, depending on your budget.

But don't jump all in right away. Brent told me that if he were to do it all over again, he would not have gone right into investing in a large octocopter, after working with just the simular and the small toy quadrocopter.

Don’t rush. There’s nothing worse than trying to jump right into something like this. We’ve all trained long and hard to learn our cameras inside and out, and need to treat flying UAVs the same way.

From the simulator and small quad, I went right into a bigger octocopter, capable of flying my DSLR. This was a full scale machine with all the bells and whistles. It was also a giant investment. Looking back, I certainly should have started with a phantom after learning to fly the quad, and moved on from there. That is definitely what I would recommend to anyone getting into flying.

The Phantom is a really fun UAV to fly, and you can produce some amazing footage using one. With that being said, if you want to come at it professionally and cater to bigger productions, and different clients, you’ll eventually want to step up to a larger system capable of flying a DSLR or larger cameras. 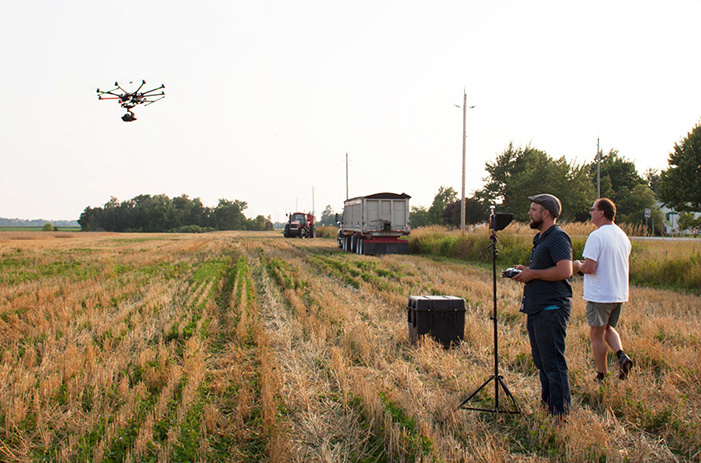 The biggest concern of all when using aerial video systems is safety. Not just for the crew or the talent, but for anyone and anything that might be nearby. Having a plan and a checklist to confirm you're ready for flight are essential.

As important as it is to get the shot, safety needs to be the number one factor when flying. You could do some serious damage to people or things around you if something were to go wrong, so always take that into consideration when planning your shots.

Don't fly over crowds, and work hard to pick a flight path that minimizes risk, and leaves you an exit strategy if something was to ever go wrong.

Brent shared with me a recent video he made that explains the basics for how to use the DJI Phantom, and you can really see just how easy it is. This is a great little video for someone who is interested in getting into UAV or drone flying.

Lastly, Brent expressed strongly that if you need to get an aerial shot right away, it would be worth it to find a pilot to work with.

Good results take time. Hire a team, or find a talented pilot to pair up with, and recognize that it’s not going to happen overnight.

Also, build your own UAV if you have the opportunity/time. This is something I wish we had done from the start. It allows you to understand your machine inside and out if something were to ever go wrong on set. 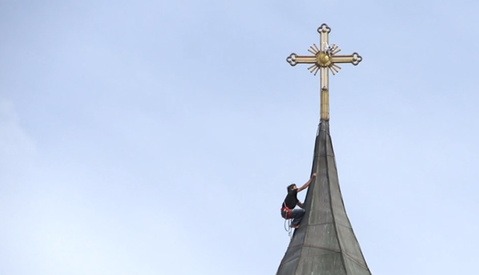 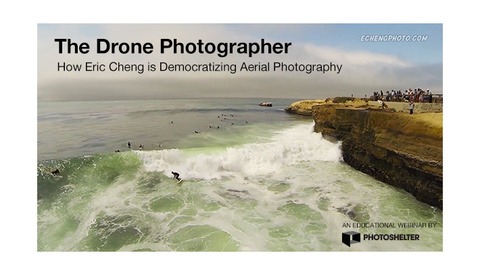 EXCELLENT. This is much needed advice and I can't wait to read the whole article (I skimmed). I can say for a fact that this is a GREAT expansion for any serious photographer. The photog I work for is right now on a very big job, and the production supervisor hired a drone operator for the shoot. That's his only job on the shoot, and I imagine that a photographer who could use all standard equipment AND operate and offer drone services, could up his/her price and cover two birds with one stone. I also know a newspaper writer who uses drones and go pros to up his value as an author. News orgs, magazines, etc...love a writer with photography skills in the back pocket, so this is good for not just photographers, but also writers wishing to add more value to their submissions.