It’s no secret that I have an unquenchable, near fetish-like lust for buttons and sliders or anything really that makes image processing akin to playing some freaky, incongruous musical instrument one might find in the Mos Eisley Cantina. This year, at CES 2014, Griffin announced an updated version of their PowerMate - an all-purpose, aluminum knob that will be wireless and wonderful and not out for a few more months. Luckily, there is a pretty great (and relatively inexpensive) wired version available now.

The PowerMate ($30) has somehow managed to fly under my radar for quite some time. It came out in 2001, initially begging the question, “What the hell is this for?” A beautiful, rounded chunk of polished aluminum with a blue light on the bottom yearning for a Miami Beach DJ booth. To the laymen, it’s a glorified volume knob. But to me, it was a wondrous use for my left hand – giving me a better, more ergonomic way to control brush elements in Photoshop. 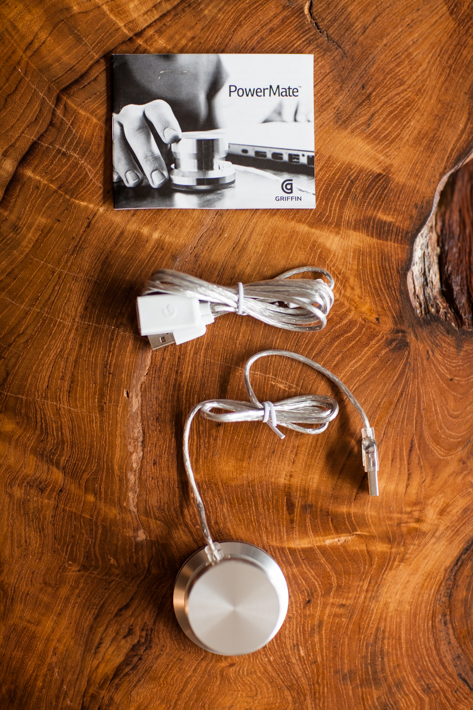 Out of the box, there wasn’t much included. There is the knob itself, a USB extension cord and manual. The PowerMate weighs a solid 4.2 oz (110 g) and has a 22” cable length with the extension. Although its own documentation touts the PowerMate as a volume knob, it quickly points out (in trendy jargon nonetheless) that, because it is actually an assignable USB controller, the possibilities for what it can do are pretty much endless. 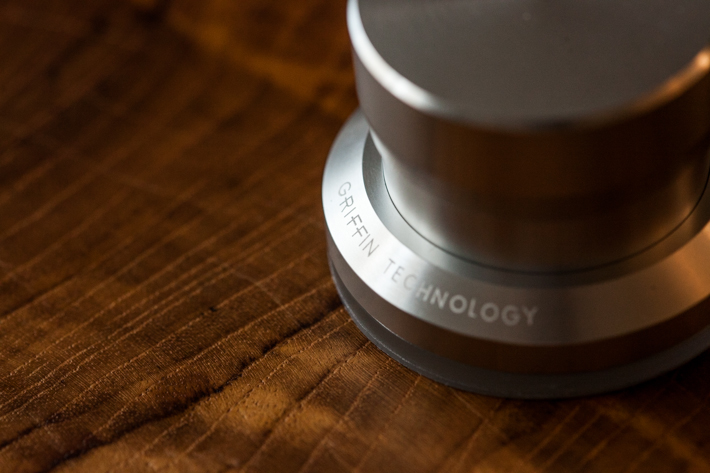 No software is included, requiring a small download from the website. Within minutes, I was programming commands – giving shortcuts a what for. Programming is very basic and straight-forward. There are only have a few possible inputs: turn left, turn right, short press, long press and pressing down and turning. Commands can be assigned to particular programs as well – turning left change brush size in Photoshop, but it can scroll through your image library in Lightroom.

Programming the keystrokes is incredibly simple. First, drag and drop a "Trigger" into the active set. Second, drag an "Action" onto your trigger. There are many actions to choose from, but the only one I needed was the "Send Key" action. To decrease the brush size, use the shortcut "[" and to increase, use "]" I used "B" as my button push to select the brush tool and a longer button push (using the "J" shortcut) to select the healing tool. 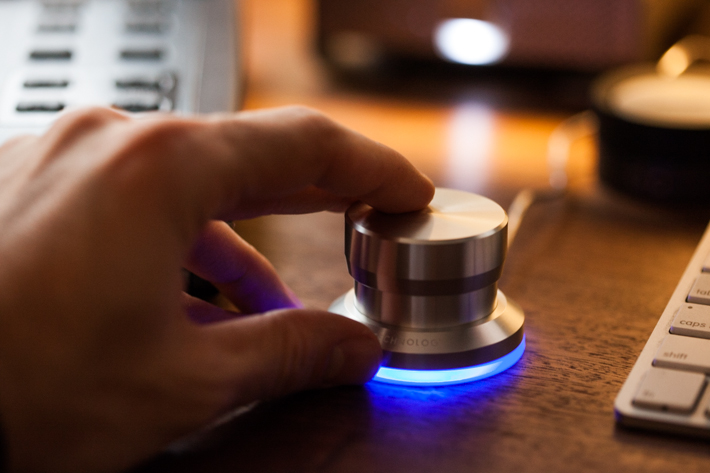 After assigning my commands, I was ready to get to work. After a few minutes of experimenting, I did notice a bit of lag on the responsiveness in the early parts of the turn. I wanted something precise, not an arcade knob. I spoke to the support at Griffin, and they are aware of and investigating the problem. The solution – at least for now – is to use version 2.1 instead of their current version 3.0. I installed this, and the knob worked like a champ. There are, however, a few things that are sacrificed by downgrading the software. 1) You lose some fancy light effects. 2) The interface is slightly less streamlined. 3) I am getting a glitch that I can’t seem to shake regarding the shortcut keys not working when pressing the button – I’m aware this could be the fault of running the current Mac version on an unsupported version of their software. I’m still working on fixing this, but no solutions as of yet.

I would also like to take the opportunity to point out the blue light on the bottom. It can be set as a steady light, a pulsing light, a CPU monitor or it can be variable depending on volume. I suppose this is a neat, albeit completely arbitrary feature, but it’s distracting and I turned it off. 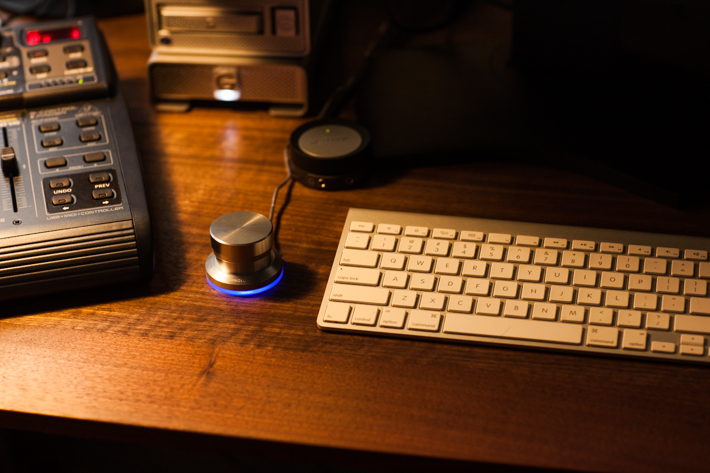 Do you need this? Of course not. That being said, it does make your life just a tad bit easier. Sure you can use a keyboard shortcut or the buttons on your Wacom tablet, but a Yaris will get you to the same place as a Cadillac. Personally, I’ll stick with the knob. Life is too short for cramped hand positions.

nice tool to have. haha

Griffin just released a new version of this (I'm not sure it is even shipping yet) that uses Bluetooth instead of a USB connection. It also allows you to connect multiple ones and use them for different things. I returned the first version after I got tired of the cord getting in my way. Hope the second version is better.

I mentioned that and linked to it in the first paragraph. It's actually not been released yet and won't be available until summer. It's also is twice the price of the current model.

I bought one in 2001, but it stopped working under Windows 7. After replacing it with a Contour Shuttle Pro V2, I threw it away.

Sounds like you wouldn't be interested but there are apparently ways to re-do the installation so that the Powermate will work in Win 7. It seems the issue might be the installer's default file system location.

What do you think of the feel of the wheel on the Contour Shuttle versus the feel of the Griffen Powermate? Either one better for fine control over small incremental adjustments?

For what it's worth, just connected a PowerMate to a computer running Win 7 and the system auto-installed it as an interface device. Downloaded and installed the utility software. Programmed it to be +/- for operating sliders in Lightroom.

Thought you might want to know, in case you didn't literally throw it away.

I did the same thing as Jonty... I had one when they first came out.. then got rid of it and got a Contour Shuttle Pro V2 and still use it to this day.. love it..

"Review" isn't helpful. What did you set your settings to and did it make a difference in your workflow?

If you like this thing, why not get Palette? http://www.kickstarter.com/projects/cchu/palette-a-freeform-interface-th...

I added a brief walkthrough of the settings. It's painfully easy to set up and literally took all of five minutes. I would say the overall time difference is pretty fractional, but it is much more comfortable to use. I've previewed Palette already here http://fstoppers.com/palette-gives-you-hands-on-control-of-any-software and have been speaking directly with the developers. I'm very anxious to get my hands on their product to try. Keep in mind though, there is a very large price difference between Palette and the PowerMate.

This thing is so tempting...but I honestly don't think it'll speed up my work flow...only make it cooler. And possibly more fun...for $30 that might be worth it...tempting

Check out the www.3DConnexion.com series of 3D mice. I have one that I originally got for CAD use (where it is indispensable) but I also us it in PS to navigate, zoom, and for hotkeys.

For y'all using the Shuttle Contour, how is the feel of the jog dial of that versus the action on the Griffin Powermate? I was thinking that the Powermate would be nice to assign Paddy for Lightroom control over slider +/- and would use it in my right hand while left hand is on Logitech G13 programmed to select specific individual sliders...

The Contour is programmable with about 18 customisable functions in addition to the "scroll" function.

Yes, it looks cool and I thought about it as a Lightroom controller. But what I'm wondering is what the "feel" of the dial is like when compared to the feel of the Powermate...

The jog wheel is a rubberised plastic coating and has a quality, solid feel about it. It is spring loaded, so returns to the central position. This adds slight fiction which helps the quality feel. The inner wheel is free turn and has a slight ratchet sound.

It all works well.

Thanks. I had been wondering if it had good positive tactile feedback or if it spun so freely that it seemed kind of disembodied. I don't know how to describe it, but if you used both and feel the Contour is at least "good," that's good enough for me.

Already had ordered the Griffen and will set it up to use in conjunction with a Logitech G13, but you're only reinforcing that maybe the Contour is the best solution, particularly if you want a single control unit (aside from mouse and keyboard).

who remembers this one? was so good! 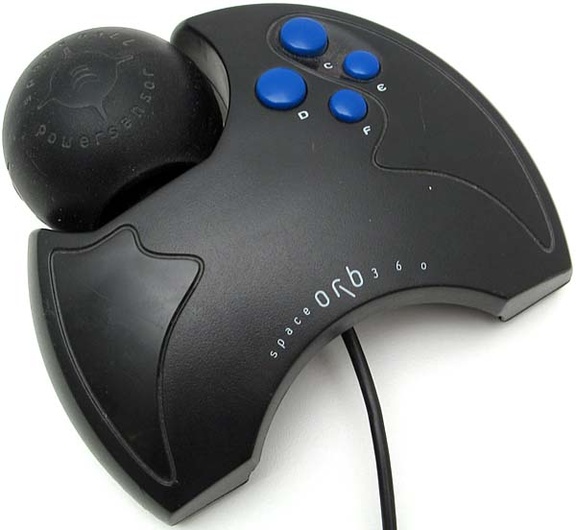 I use it as a jog shuttle for the teleprompter

Has anyone here tried configuring the scroll wheel of a mouse to serve this purpose?

At least with Logitech's software, one cannot map the scroll wheel to customized functions. Mouse tilt left/right (for mouses that can do this), yes, but not the standard scroll up/down that you'd want. One could probably do it with third-party software, though. But even if one could, I'd rather have a separate control. I think really extensive usage of the mouse wheel for fine operations would do a big carpal tunnel number on your hand.

There's one of these on the desk in the control room at the Shatterdome in Pacific Rim.

Looks like there's one of these on the desk in the control room at the Shatterdome in Pacific Rim.

can you actually control the lightroom sliders with the powermate by hovering over the slider with the mouse? This would be great.
Thanks