New Shared Camera App by Hipstamatic Is Fun and Frustrating

A new filtered camera app that allows groups of mobile photographers to share in a timed shootout was released for iOS last week by app developer Hipstamatic. The free app, called DSPO, creates a collaboration of images via gallery or slideshow that none of the contributors can view until the session expires. But in a mobile photography world ruled by Instagram, Snapchat, and VSCO Cam, does DSPO stand a chance?

I asked some photographer friends to help me test out a few “cameras” this weekend. While DSPO has a fairly simple interface that doesn’t beg for much explanation, we all shared similar frustrations trying to use it. Getting started felt clunky, with less than smooth Facebook integration and some freezing screens, and I ended up feeling like DSPO would have been a lot of fun if it could get out of its own way.

Once you download DSPO, you’ll have to start a new camera (Hipstamatic’s term for a shared photo session). From here, the camera is given a name, a cover photo and a duration is set for how long until it’s developed. You can invite users via text message or social media. It might be that my friends just aren’t that smart, but several people had trouble figuring out how to get started and join a camera quickly. Once they do sign on, friends will appear as DSPO friends in the app and can be invited without the aid of outside messaging.

It was during this getting-started process that DSPO is the most frustrating. My Facebook friends all appeared in the app with my sister-in-law’s profile pic for some reason, and I often had the app freeze on me while trying to take a cover photo. Several times this resulted in a camera being created after the app crashed and I didn’t realize it had worked until the camera expired and notified me. This was just maddening when I had the great idea to take a shot from atop a parking structure and quickly challenge my friends to a one-hour "highest place you can reach" camera.

>Here’s the thing though: It’s actually sort of fun if you can stumble past the start. Creating a color-based theme or location theme for a camera and then giving your friends either an hour or a few days to collaborate is a blast. While shooting, users will get notifications of where and when their friends are taking photos, but you have to wait for the timer to expire to see everyone’s effort. It’s a pretty satisfying formula.

After the timer is up, you can save the gallery or export a slideshow to various social media platforms to share. This works with little effort and is a fun way for your group to recall their co-adventure. Though you can chat within the app, having a little inside joke on Instagram feels more fun.

I’m not a big Snapchat user, but I can see where something like DSPO could draw from both fans of that and Instagram to gain a following. Making friend invites both easier and more graphically obvious for when a camera is already started would be a huge step in the right direction. Also, nobody I collaborated with was too wild about the few included filters that came with the app. You can buy additional filters, which none of us did. Furthermore, we collectively decided a filterless option would be preferred as opposed to more free filters.

It’s pretty easy to recommend giving Hipstamatic’s DSPO a try. It’s a free app, after all. If you have a group of friends that are already good for a rambling group text or expansive commenting on social media, then this might just be a great recreational app.

As for me, I’m still on the fence. Help me decide by joining this camera: Fstoppers DSPO Camera. You MUST install the app first for it to work, then click the link from your phone, and don't forget this is iOS only. Thanks!

Let me know how the app works for you. I'll update with a link to the slideshow if we get some participation.

A big thanks to photographers Derek Cookson, Miranda Hopkins, Melissa Tremblay, and Ed Maurer for lending me their time and making a few cameras. 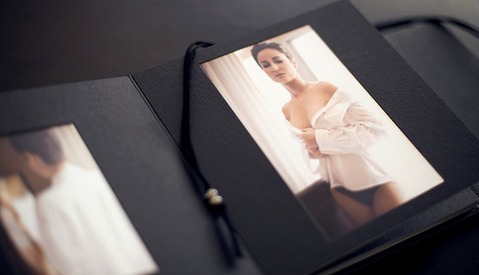 Commercial / December 11, 2014
Confessions Of A Print Skeptic, and Why I Now Offer Them