The Secret To Photographing Rock Climbing Is... A Ladder?

It just might be, although not used in the traditional way. An image of adventure photographer Corey Rich and free-climber Alex Honnold shows Corey shooting photos from an extended ladder, on the side of a rock face that is several hundred feet in the air. Shooting rock climbing photos can often be a challenge, and I for one have done it a few times but never considered a ladder before. As you can see in the full image, Corey appears to have clipped a few slings into the rock and secured a ladder on the face. 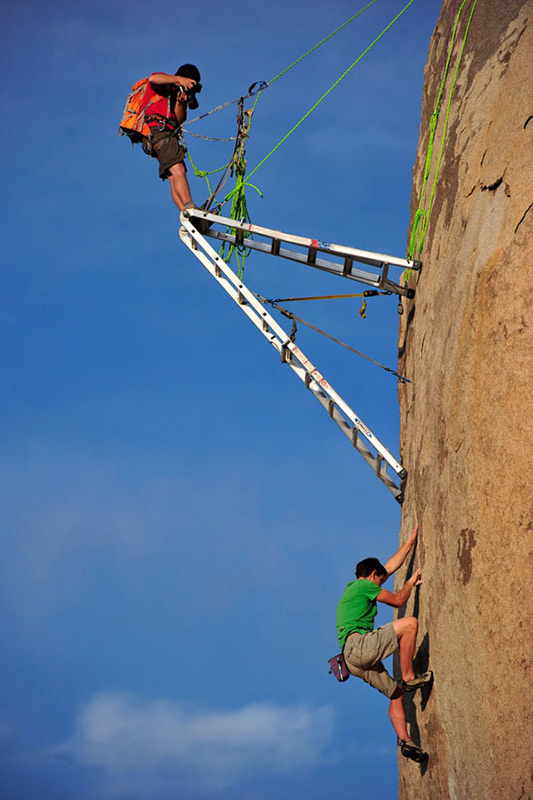 A similar image, depicting Corey on the ladder, could be seen in the Nikon D4 behind-the-scenes video. It's an interesting approach for sure. I can tell you that one of the difficulties with shooting rock climbers is avoiding the "butt shot" from below, and then getting into a position above them so that you can not only see the climber's face, but the exposure and danger that may be present, as well as interesting rock formations and landscapes that lie beyond the rock wall or boulder. Hanging from slings on an adjacent climbing route can help, but getting a few feet away from the rock face can give shooters the perspective they seek. Using a ladder to prop yourself far enough away would seem to give you a bit more stability so you don't have to strain your legs to hold position. (Having a steady shot is critical if you're shooting video– contorting your body and trying to keep a stable shot is quite a challenge) Here are some more images from the shoot, but what do you think of this technique? How would you haul a ladder up the side of a rock face? 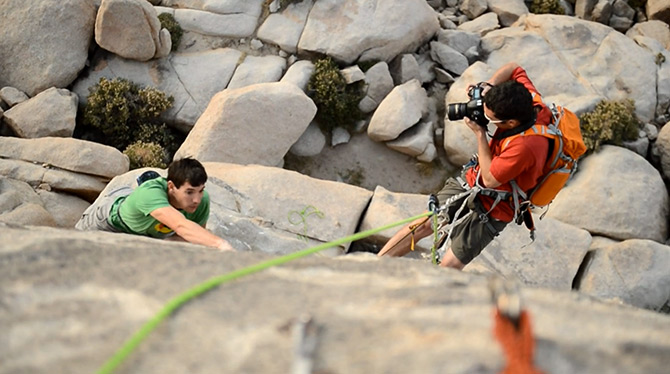 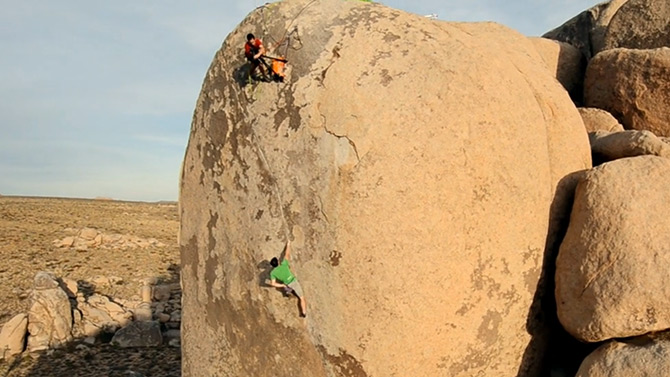 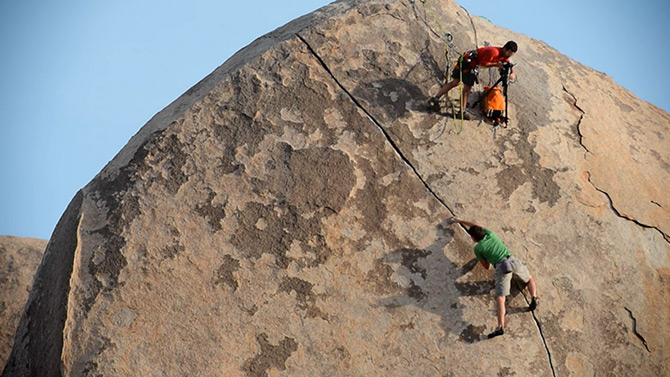 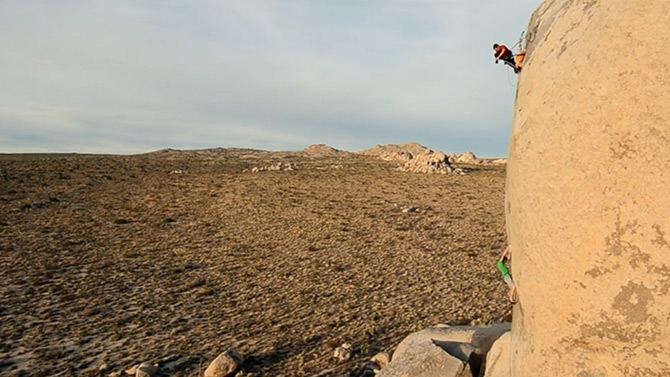 Well.. you COULD use a monopod and just stick it way out.. but the ladder thing is much cooler.  I admit, I don't like to do things the simple way either.

Dammit. I knew this would show up here and I hoped it wouldn't. With the last post about climbing photography being woefully misguided, I just knew that this would be posted.

"How would you haul a ladder up the side of a rock face?" Ok, first cut out "side of" or else you are talking about not hauling it up the face at all, but something else. Second, you're asking photographers who generally wouldn't know a bowline from a prussik, or if a grigri or traxion is better suited for a top rope solo.

This is not the norm for a shoot like this. This not necessarily the best idea for a shoot like this. Just because it works once doesn't mean its the best idea. Jimmy Chin, Tim Kemple, Andy Mann, and others, would be much more likely to be just push off the wall and swing, pop off a few shots, and repeat. That way if you jug up, you don't have to move unnecessary equipment and can be much more versatile about how you are shooting and your angles.

The photos are not bad, but this is not "The Secret to Photographing Rock Climbing."

"How would you haul a ladder up the side of a rock face?"...
They didn't, they just lowered it down from above.

"[They] would be much more likely to be just push off the wall and swing"...
It's a boulder climb, not an exposed face.

"Second, you're asking photographers who generally wouldn't know a bowline from a prussik, or if a grigri or traxion is better suited for a top rope solo."...
it is a top rope setup for the shoot, and the shooter is securely rigged.

"The Secret to Photographing Rock Climbing."... no at all, but one of many approaches to securely rig for a shoot.

You completely misunderstood all of what I was saying, so much so I'm not sure you're reading it. I wasn't saying what he was doing with his rigging was wrong, but stating that it wasn't the best choice and the whole post was poorly done.

First, I was quoting a question, not asking how to do it. I know how you COULD do it, but questioning why you would ask photographers who have no basis of knowledge on the subject.

Second point, which you skipped down to, really shows you don't understand. Bouldering is on an exposed face in this case. Its not bouldering, its free-soloing, unless you're "bouldering" something that is rated as a route, at (what?) 12c, I believe? Its not a boulder problem in the first place, its on a boulder. But you miss the point. I believe you were looking for "overhanging" or "sheer vertical" as the adjective, but its moot, you can kick off of anything less than vertical just the same. It would have worked, sorry if you don't know that.

Third point, again, you miss that I'm not challenging his rigging, I'm challenging why we're asking people have no idea how to rig up a top rope how they would take a ladder to a wall, an inherently useless idea anyway. The entire idea of asking is misguided and dangerous. Let me know if you want to learn how to rig for a big wall, but please return to reading comprehension first so I can be sure you know what you're being taught.

If theres one thing wrong, its your reasoning ability.

Well, you do know climbing words. I can rattle off a bunch to sound like you too, but...

There's nothing wrong with strapping a ladder to a face as was done here.
Also, it's not "an inherently useless idea", it's simply a method to gain a stable platform above and outside the normal "butt-shot" or "bald-spot shot".
Dangerous, not particularly if simple common sense is applied.
Misguided, no, an innovative approach to getting better angles for this type of shot.

If we follow your logic on this shot, somehow the shooter is supposed to rig himself to that boulder and repeatedly push-off in order to get shots from the same angle. Your method is in fact more dangerous than a static base as constructed here. The ladder is securely braced, and the shooter is appropriately rigged as well.

I would be very interested to see good video [as mentioned in the article] using your push-off technique.

You seem to think that no one without extreme training in rock climbing should ever be photographing climbers. On El Capitan, no beginner would even want to look over the edge, let alone top rope down, so your argument is actually moot.

A perfectly good approach to get a unique viewpoint on rock climbing for people who are interested in the sport.

Rather than bad mouth the whole article as "misguided and dangerous", why not use your expertise to explain your "safe" approach to this subject?

I thought fstoppers was meant to inspire us and not become a forum for these types of discussion; I don't read all posts, only the things that interest me, and it's great to check out new techniques and so on. Titles are supposed to be cheesy and catchy as well, so no problem with that. Just get inspired guys!

Forgive me if the title seemed misleading. While I did mean it to be a bit tongue-in-cheek, I was also using it as a way of addressing a question that I have heard and read all too often. That question is: "How did they shoot that rock climbing photo?" or, "Where was the photographer when he took that shot?" The image of Corey on a ladder that is propped horizontally looks absurd without context, I wanted my headline to match.

I completely agree with you that this is not a typical shooting style, and I hope my post did not imply that this is the norm. I merely wanted to vouch for the technique, and provide some commentary on why it might actually work. After having shot video of rock climbers, I know first-hand how difficult it can be to maintain a steady shot. While not every climbing area would lend itself to having a ladder, the concept of using something to prop oneself away from the wall to help with balance and stability is, in my opinion, a great idea.

While I can't speak for other writers on the site and what they post, I can say that I'm actually glad you thought you might see this photograph here. I feel that rock climbing is an underrated activity and whenever I have a chance to call more attention or interest to it, I take that opportunity. I've made several posts in the past that have some relation to climbing, and I'm always delighted by the numerous positive comments from other climbers who are excited to have content that is relevant to them.

Thanks for reading,
--Mike

Why is almost everyone on FStopper such a troll? The minute you can afford to rent a helicopter to shoot from the side of a rock versus the 'unnecessary way' of him using a ladder,  then we can talk. But for now, just let every photog out there hang, jump, creep, do a handstand while shooting... whatever works for them.

He used multiple heli drones in addition to the ladder.  Watch the D4 video.

simplicity is the mark of genius....
however,  pepe danquart really followd that topic throgh with his movie "to the  limit", hope you can pick up a copy in english....
http://www.imdb.com/title/tt0959282/
(even with subtitles - the Huber brothers have such a thick bavarian accent that even the german audience needs subtitles).
The images and climbing scenes are spectacular and breathtaking, displaying the art of climbing from a vantage point normally unavailable to us mere mortals.

I actually have a rig that is homemade and accomplishes the same task. Out of some piping I create a triangle and hang off a point with one edge on the rock wall.