What Does America Think of 360-Video? The Answer May Surprise You

Have you immersed yourself in 360 degree technology? What do you think of 360-degree video and its future? Nikon was eager to find answers to these questions by initiating and conducting a "Nikon Life in 360" national survey. According to Nikon's study, you're more than likely to put your hands on a 360-degree camera soon if you haven't yet. Let's find out!

Nearly 75 percent of Americans are interested in trying out 360 cameras to capture their experiences. Nine out of ten Americans believe content they currently view would be better using 360-degree technology.

These stats are just scratching the surface of what is a very revealing case study on how consumers view 360-degree, are interested in it, curious in trying the technology, and their preferences to it.

American respondents were asked what visual content would they prefer to be shot with a 360-degree camera.

As stated earlier, 90 percent of Americans thought some 360-degree content would become a better experience if viewed in 360. Topping the charts was sports, travel, and live entertainment (60%). 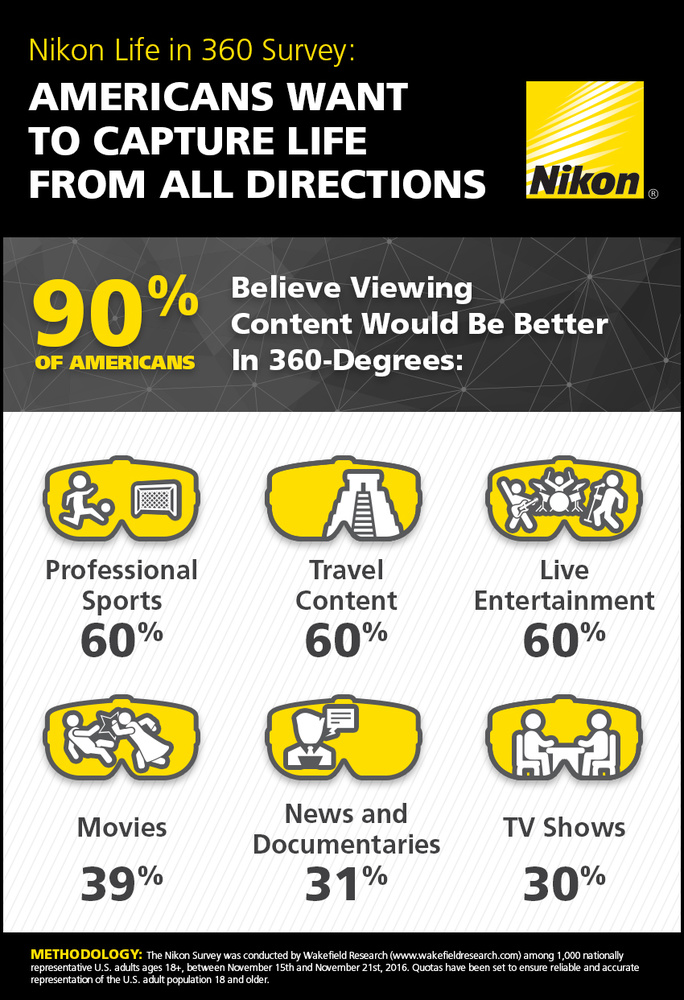 Capturing and Sharing These Moments in a New Way

Would you use a 360-degree camera for your travel? According to Nikon's survey, the majority (92%) of Americans would like to use a 360-camera to capture personal experiences including but not limited to: vacations, family moments, milestones, outdoor activites, etc.

It goes without saying that 360 videos can capture moments in more exciting ways than tradition video cameras in today's market. 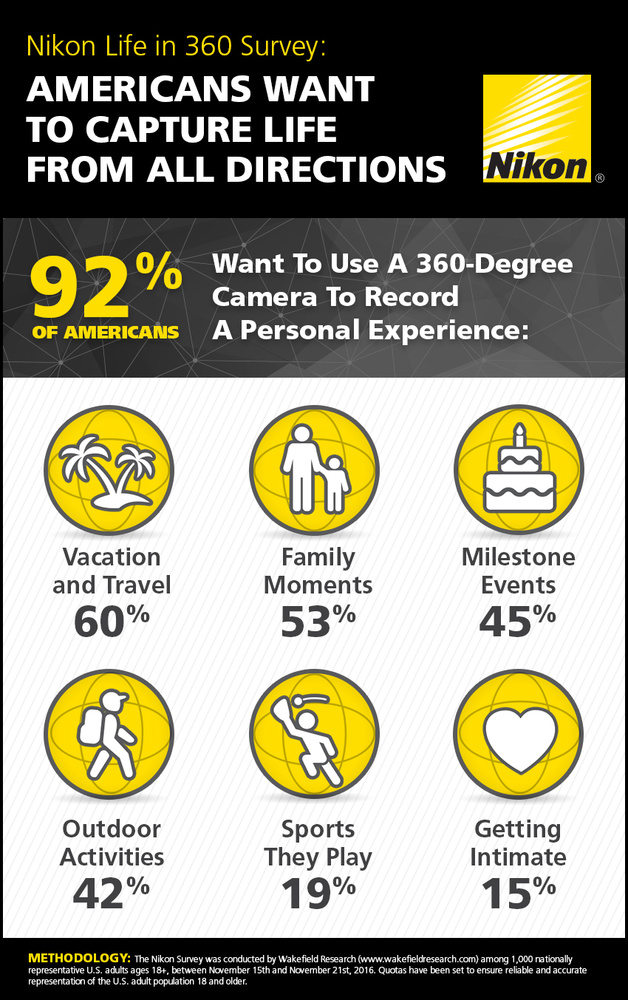 The Future of 360: An Emerging Experience

Have you used or tested a 360-camera? Nikon says only one out of every four Americans have but that number is expected to climb and the interest in using this technology is on the rise.

Nearly three quarter of Americans are looking to try this technology in the near future. 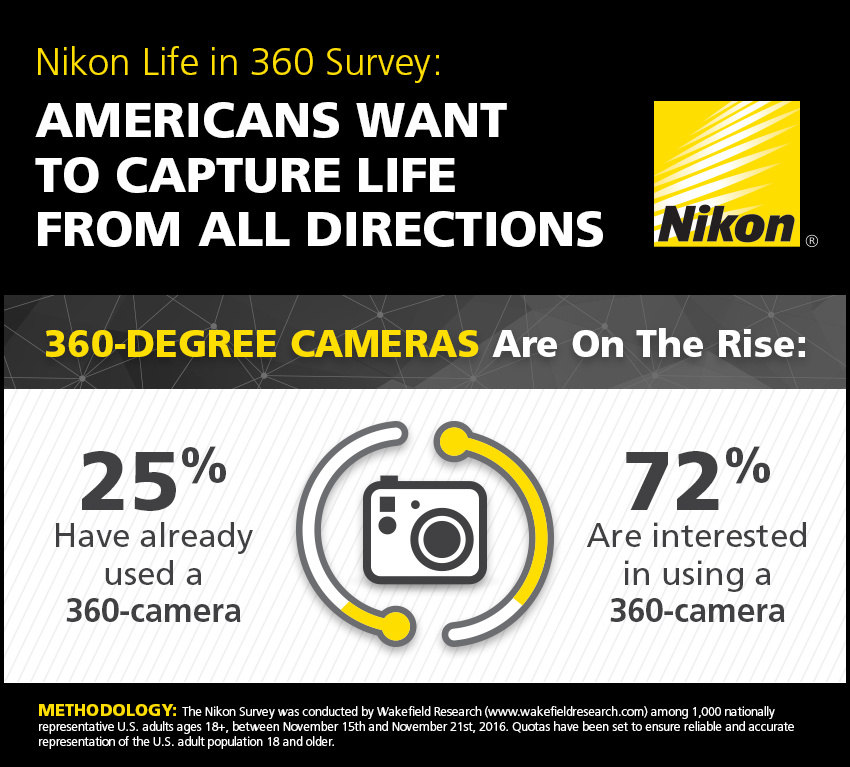 My Opinion, And Yours?

360-camera technology definitely made its coming out party in 2016 and it will be interesting to see how it progresses in 2017. If I were asked about 360 technology as a creative this would be my answer:

I believe there is a place for 360-video but I do not believe it's going to "take over" traditional video as we know it in the near future. I believe the acceptance and viewership of vertical video is growing even more rapidly. The majority of those who have a smartphone has taken a vertical video, and for those who say they haven't are probably not being truthful. According to this survey, only one in four Americans have tried 360-technology. In my opinion, 360-video in the long term will have a strong share in the market but it will take more time than Nikon's study suggests.

Education / January 21, 2020
The Power of a Little Surprise in Photography

I believe 360 main area of use is to add dynamic camera angels and animated transitions to edited productions. Minus interactive and virtual reality (Myst like stationary shot transitions) applications, it's just another b-roll camera for some niche shots. The stand alone action 360 content I've seen has been too pixelated on the edge seams for real 360 immersion. In addition, most shots were shaky too, making them feel jarring and out of place. Definitely a cool supplemtal tool to add to the mix of any production.

I stay away from YouTube 360 videos because of the poor quality. Low resolution video redefined. No thanks.

I'm not sure anyone has figured out how to use 360 video to tell a compelling story yet. I'm not holding my breath that too many people will figure out how.

So I suspect 360 video will be the next 3d tv. A cool idea, useful for a few niche applications, but won't really catch on in the mainstream.

While I do see it as a useful tool, but integrating it into a work flow for production or even casual video may be limited to just the 360 aspect of it instead of a linear to 360 transition. I can see it being used in interior shots for maybe Real estate of car interiors for web use

only when 360 videos are high quality

I'm surprised that 25% of Americans claim to have used a 360 camera. I've been shooting 360 here in the UK for the past few months & most folk here haven't a clue what it is yet. I find it interesting, but at this stage I don't see it taking over from traditional stills or video.

Second - 360 video helps people immerse in their own memories- that's what it is always about photography for most people - and if you talk to normal people about their frustrations with photography is that they struggle capturing the "whole" scene the way they see it. (btw. a bit off topic - the reason iPads are used for photography is, that the scale of the objects on the screen is like the one in real live)

The appeal of 360 is that they don't want to figure out how to tell a story - the story is already there happening for them and they just want to relive it in a more immersive way - on their phone.

So "affordable" 360 might not be available in quality levels for the average producer, but for average consumers is already here and has a future imo.

I have been using 360 environments to create surreal art, i think interesting things will develop in this direction.
http://www.ronengoldman.com/dreams-in-360-the-storyteller

What an awful clickbait title. What is this, buzzfeed?