The past few weeks I have been driving up the parkway here in New Jersey for work, my eye kept getting drawn towards this one specific railroad bridge between exit 136 and 137. Every time I passed by it, my eyes would follow it until I had to turn to see the road in front of me again. It was one of those things that I had to remember so I could go back and photograph it when the time came. Today was the day that I set out to photograph it, but before anything, I had to put a little bit of planning into it.

The Image in Mind

This is always the idea I have in my mind before I take the photo. Of course, this is always a perfect image in my head but when I go out to shoot, it is all up to me to recreate what I see in my mind. That is the hardest part because unfortunately, things don't always go as planned. In my case, I imagined the NJ Transit Train coming underneath this really neat looking bridge and I would be standing there trapped on the tracks fearless of the train headed my way. 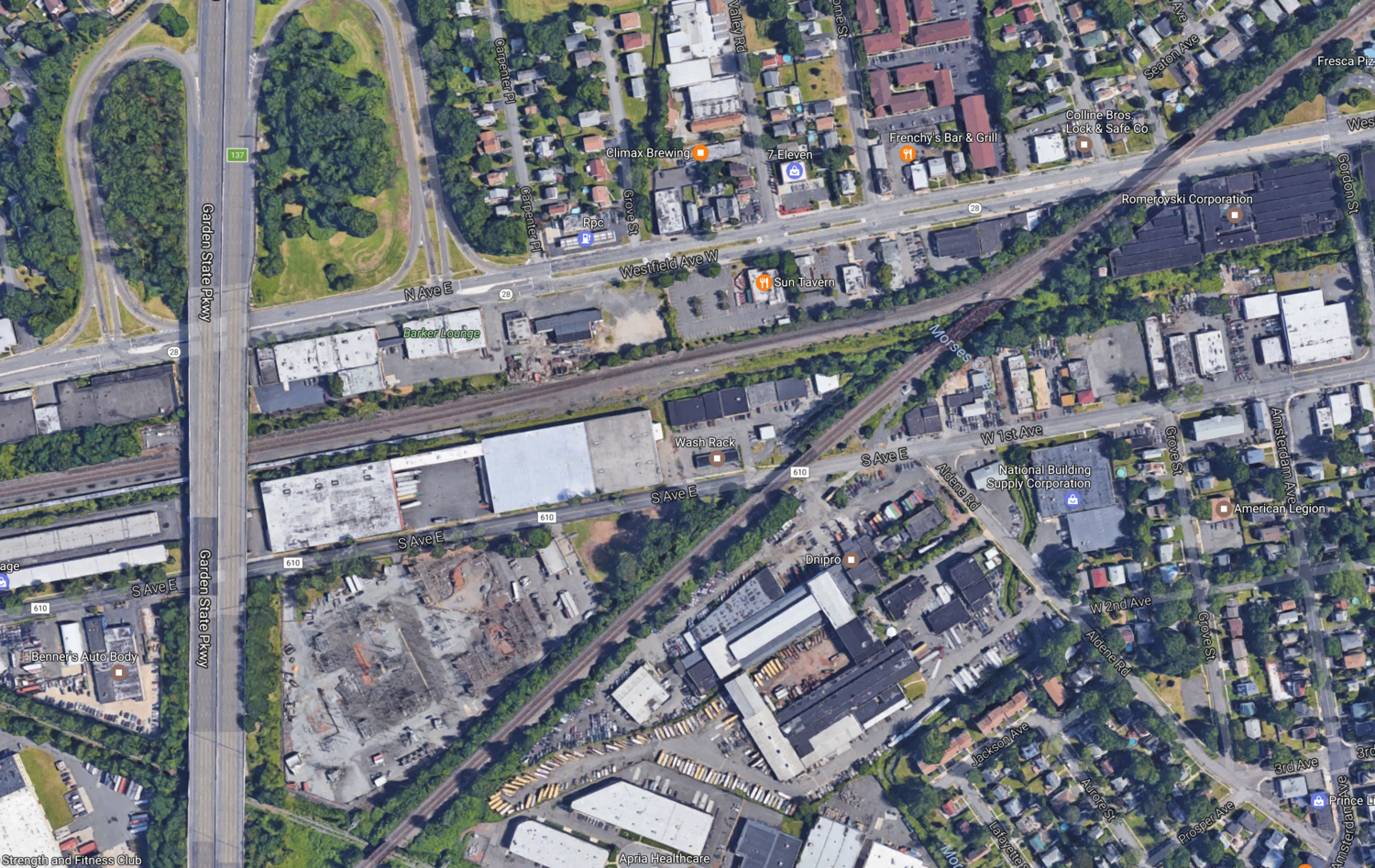 I already had an idea of where this place was and knew it was about 50 minutes away from where I currently live. Once I found the location I was traveling to, there were plenty of other things I had to worry about. If you plan on shooting a train, you may want to be aware of the trains schedule so that you don't miss it. In my case doing aerials, I can only fly for about 15-20 minutes before I have to land and put new batteries in to get back up. So before leaving my house, I made sure I knew when the train was coming so that I could launch my drone at the right times to photograph it going both directions. Turns out that didn't even matter because this railway was only for cargo trains, something I had assumed but hoped wasn't the case. Now I also wanted to be able to walk up to the bridge, so I needed to find a place that I could park my car where I wouldn't get towed, ticketed, or in trouble by anyone. This went a lot smoother than normal because there was literally a dirt parking lot with a ramp going right up to the bridge. I'm sure I wasn't supposed to be there, but I got my hour or so of time that I needed to shoot without any trouble. The image above is what I always look at before I go to shoot aerials because I get an idea of where to park and take off while also getting a brief overview of the entire space from a satellite perspective. Below is a raw image from my Inspire 2 with the new Venus 7.5mm Micro 4/3 which I will be writing about soon enough. The track that isn't covered by the bridge is the track that the scheduled train was running on. 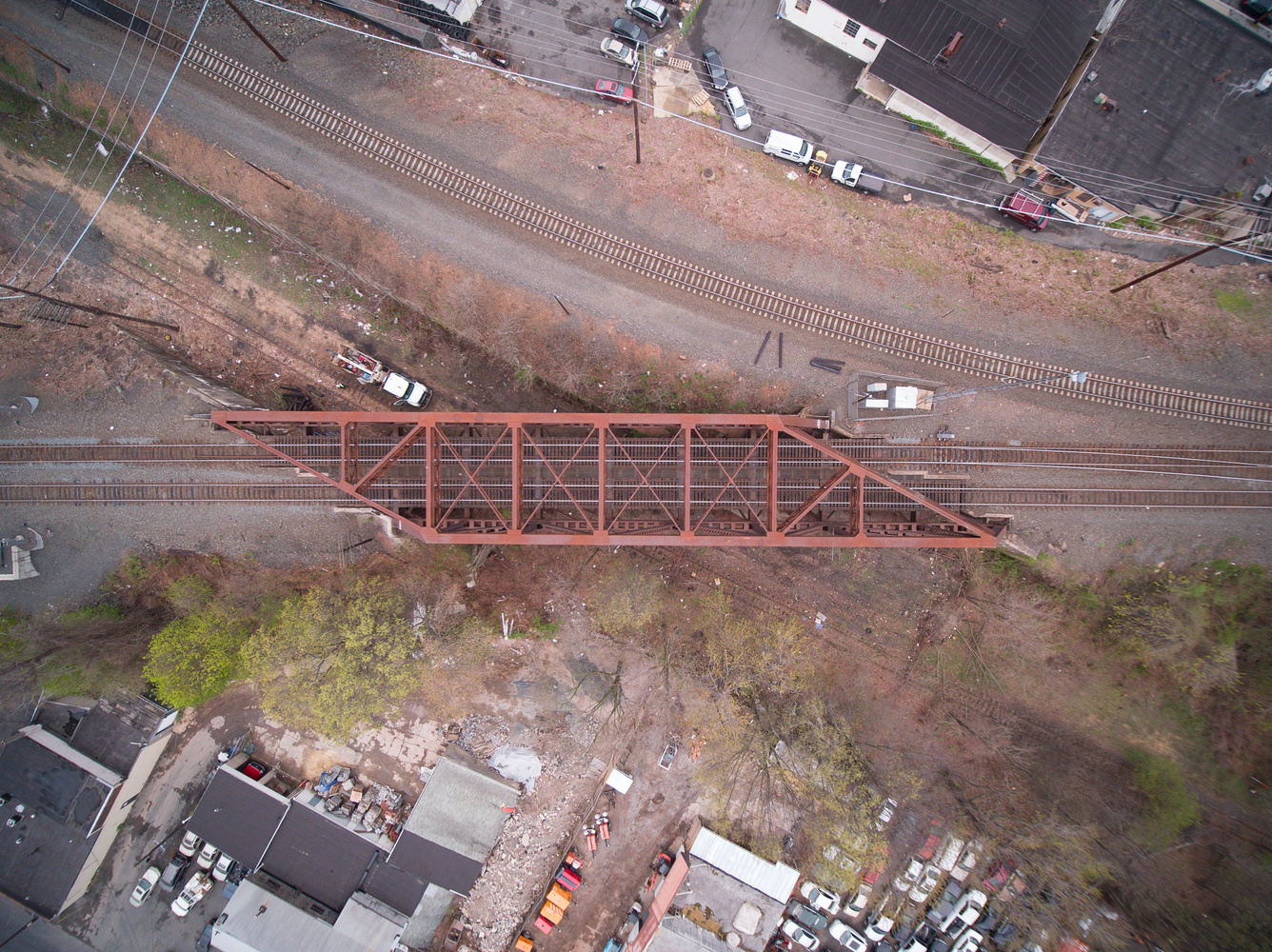 I woke up this morning with the day off from my real estate jobs (not really cause I should be editing them) and it was raining a bit. By the time I was up and ready, the rain had stopped and the overcast was calling my name. I imagined this photo being taken in a softer light so everything was balanced, the only way that is to either find the right weather or shoot before or after the sunrise or sunset. In this case, it was cloudy, I had the day off, and I wanted to take this picture. So regardless of what happened with the weather, I headed out there to take the photo and hoped for the best. 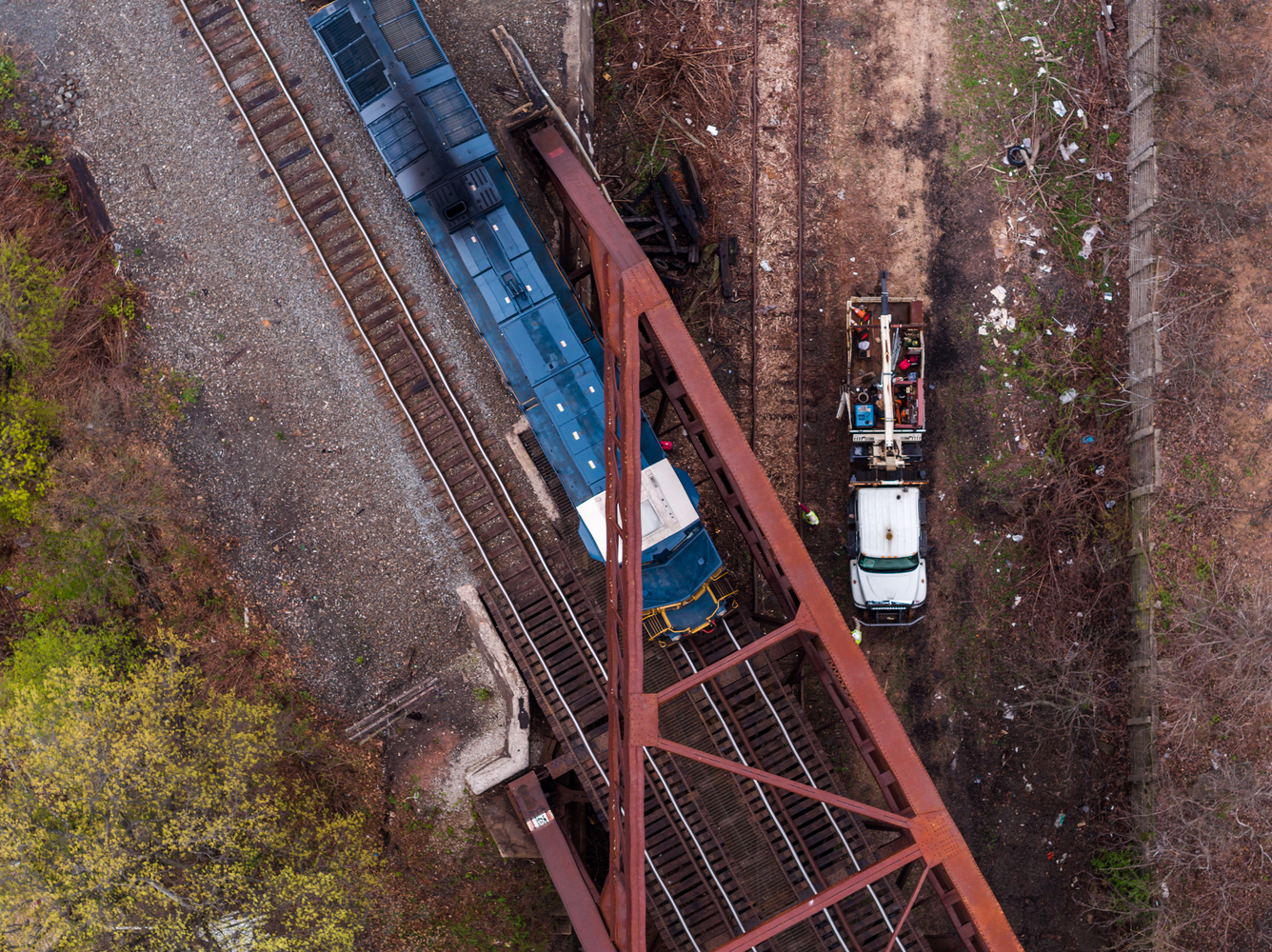 So first problem, this was not a railroad for public transit trains, it was for cargo trains and did not look to be very active today. Second problem, the train did not come down the tracks the same way I saw it in my mind so therefore my whole idea for this shoot was thrown off. After flying two batteries on my drone out here, one link of the train decided to make its way down the railroad for me to photograph, though it isn't what I had expected, it still worked to fit the "idea" I was going for. All in all, I was lucky to only have these two little issues as opposed to having several more to actually ruin the shoot. 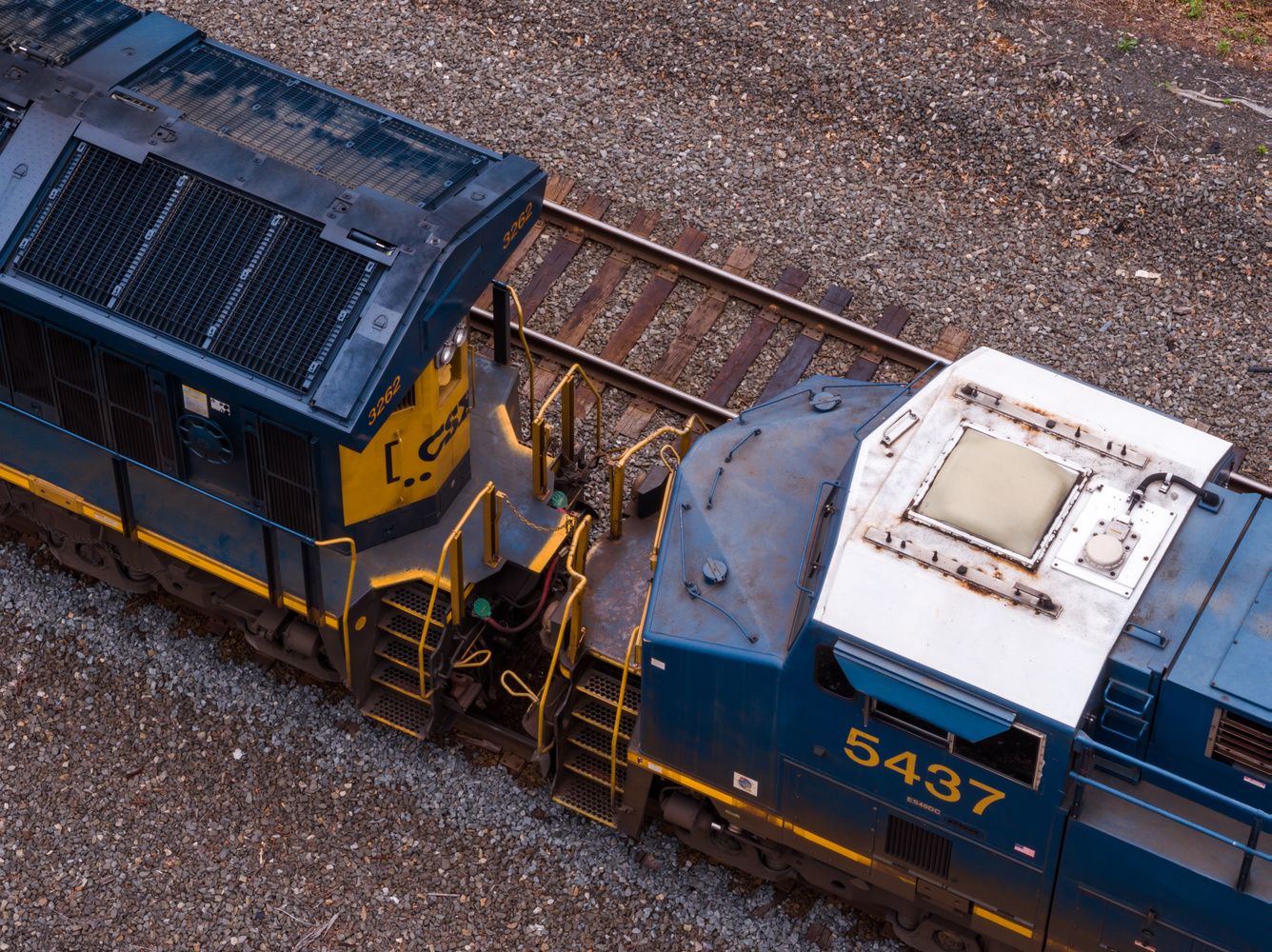 I dealt with the problems and worked with what I had. I went here with a similar image in mind, but based on the fact that the train I wanted was not the train that went under the bridge, and that the train that did go under the bridge wasn't exactly better or worse than I had imagined; I had to work with what I had to create the closest image I could. One thing I did not realize until I was flying was a water tower in the distance. I knew I wanted my shot to be in portrait mode solely with the bridge and the train, but shooting from an angle and including the water tower may have added to the final image (Below). 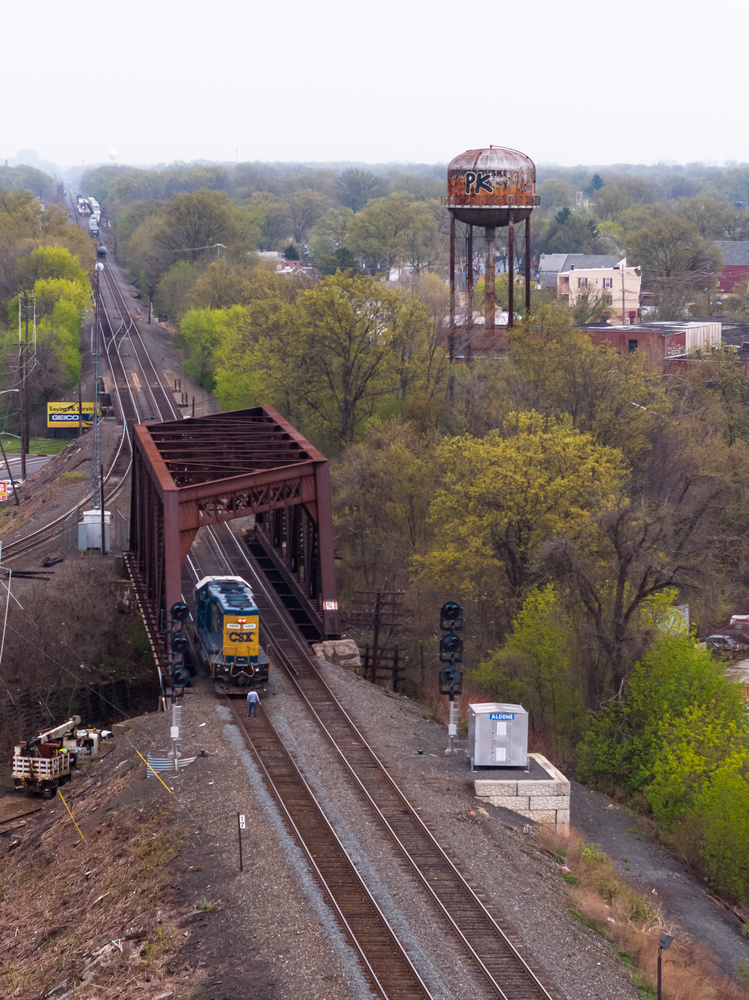 As a photographer, when it comes to shooting photo or video, there is always a specific expectation I have for my work. Today ended up going really well considering I did not get in trouble for being in the spot I was in and I also got a couple of neat photos that I actually enjoy. On top of that, it was good to get out of the house and take a break from work, it was warm for once and the wind was very light which my drone liked a lot. For me, I sometimes go out and spend hours trying to get what I want only to come home and not like what I shot as much as I thought I would. In this case, I would return and shoot again, knowing what to do differently. If you have any specific photos in mind, I would recommend doing any sort of planning to take them, whether you plan to go somewhere at a specific time of day or during specific weather conditions, or you look deeper into the shoot to get everything to meet your standards. I encourage all you creative's to go out and shoot and learn as much as you can when you have the time to!

For any of my other work, check out my Instagram or my site in the Bio below!

Aerial
Exploring the Unknown: Thoughts of an Aerial Photographer

Aerial
Consistency in a Photo Series: Why It's Important

Lucky you. According to new German regulations you cannot fly closer than 100m to railroad tracks :)

Ty, the trains are called freight, not cargo (former model railroader). The reason why you did not get the shot you wanted is because the train performed what is called a switching move. Your last shot shows the train being broken up into two parts. This is so the cars that need to be dropped off at a particular spot can be.

wow this was cool lol. interesting info I didn't know about. How/why do you know so much about trains?

Tom, sorry for taking so long to respond but I was out of town. Thirty or so years ago the various railroads had people rather than computers control rail traffic and me and a couple of my friends would hang out with these guys called interlocking tower operators. They taught us a lot of how a railroad works. The rest of it we read about in books and talked to railfans.

Thank you for the knowledge! I think that this stuff is interesting to even just look at, but then hearing about it makes it that much cooler. I can understand how it works a bit now, but I guess it would be a lot harder to look up that schedule than it would for pubic transit haha

Ty, normally I would contact a plant operator or by knowing the train designation I would know what the train had and what switching moves (if any) would be done in a particular area.

Photographing trains is how I started as a photographer.

So was the final image a composite then?? I always learn more from the photoshoots that don't go to plan!

The final image was a composite yes. I'm sure I could have done it as one image but I don't think it is worth standing on the tracks with a train right there haha... So the final image is a photo of me laid on top of the photo of the train going under the bridge, just two photos! I agree though, if I was going to go back and do this shot again, there are plenty of other things I would change or pay attention to!