You have likely already seen nighttime time-lapses in which the rotation of Earth causes the night sky to move. This incredibly neat time-lapse flips that on its head by holding the Milky Way stationary, showing the ground tilting as Earth continues to rotate and making for quite the mindblowing effect.

Coming to you from Aryeh Nirenberg, this creative and trippy time-lapse shows Earth rotating as the Milky Way remains stationary, causing the ground to tilt at increasingly striking angles. Of course, we are used to seeing time-lapses in which the ground remains stationary and the night sky consequently rotates through the frame. But tossing aside convention for a second and speaking mathematically, there is no reason you can't choose to stabilize the night sky instead, which is exactly what Nirenberg did, creating this unique and visually arresting result. The 55-second time-lapse took approximately 1,100 10-second exposures to create, for which he chose to use an astro-modified Sony a7S II (talk about the perfect night sky camera) with a Canon 24-70mm f/2.8L II lens. Nirenberg has lots of very neat time-lapses in his portfolio, so be sure to check out his YouTube channel and Instagram for more!

Astrophotography / April 15, 2019
Are You Ready for the Summer Milky Way?

Dont worry as around the circumference is a wall of ice. That's why there has never been a report of someone falling off before.

Don't be afraid of what's behind the ice wall: John Snow is on guard!

That's really clever and like duh, such an obvious idea - After you've seen it done although it would take a shirtload of work. You really get a sense of the Earth rotating in space.

Another variation is a lunar eclipse - of the Earth from space, although that'd be beyond the budget of most of us. 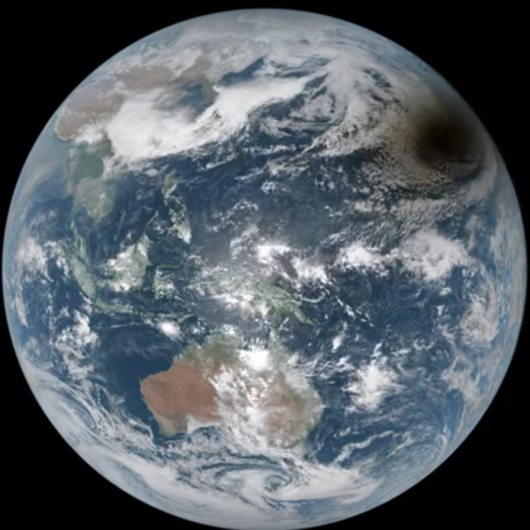 Another demonstration that the Earth if flat…

It did not need to be me to make this joke, but someone needed to make it. Kudos.

That hurts my brain...lol. Beautiful work...!

That’s really, really cool. Puts the Earth in perspective with the solar system. Thanks for sharing.

Wow. I'm blown away by the simplicity and the beauty of this.