14-Year SNL Director of Photography, Alex Buono, on His Beginnings, Working for Free, and Advice for Film Students

When someone asks if you’ll be able to meet with a DP that has worked with NBC’s Saturday Night Live over the last decade and a half, you don’t exactly say, “No, thanks.” You’re simply guaranteed to get something great. Even coming from USC’s film school, it takes a lot to get that position. But, by his own admission, Alex Buono would be hard pressed to disagree that all it takes is attitude, persistence, and a little free work at the start.
Before you let that last part put some of you on standby, pitchforks in hand, ready to knock down any further mention of or justification for “free work,” you — the industry — may want to hear Buono out.
More than anything, Buono sees the industry’s “free” internships and “free” work days as an incredibly fair trade. That viewpoint doesn’t come without reservations and exceptions, but it does come after quite a bit of personal experience.
In his own workshop, Buono described his first “free” job which he left for (driving to Oklahoma) the day after graduating from USC to become a camera assistant on the set of Twister (1996). After working for a few months, the production then began paying him to cover his expenses in the motel that became his home until and after that point. But he wasn’t perfect. As a film loader, he flashed a 1000-ft roll of film that had recorded some of the day’s best practical effects, which undoubtedly did not come cheap to the production.
Working for free isn’t everyone’s idea of what’s “fair,” but Buono maintains that it’s a part of the process and that the film industry is the only one that would be so "cavalier in their hiring practices” that they would hire someone with so relatively little experience to begin with. Fairly, he still calls out productions that might have the money and opportunity to pay someone, but that choose not to, saying: “There’s not even a fine line — there’s a fairly thick line when there’s a production that’s abusing labor.”
But in many productions’ defense, interns and other “free” labor (read: “inexperienced labor”) are bound to make mistakes and use those opportunities to learn on the job. Buono sounds clear and sensible when he states the producer’s dilemma at this stage: “If you want me to pay someone, I’ll just pay someone that’s actually done this before.”
What some might call cynical is in fact a wakeup call to students who might not realize the threat that their inexperience might pose to a production. And without pay, that risk is equalized between both parties.

Buono further discussed how he started and what it took to “make” it in an industry that is anything but easy — sometimes it’s just about getting paid somewhere to do something.
"I almost did this unintentionally,” Buono continued. ”But when I got out of film school, I focused on figuring how to get paid — how to get a job. And my friends who just weren’t above being an assistant or getting someone a coffee — they’re the ones who survived…"
Understanding what point of your career you’re in is key to making great relationships, maintaining them, and creating jobs for yourself. Some of the worst interns Buono worked with came from some of the top film schools. The recent graduates thought they had paid their dues and were ungrateful for anything but an opportunity to literally get behind the camera — and that just wasn’t going to happen on their first go-around.
Some Craigslist interns, on the other hand, proved to be the most grateful and open to anything. One woman’s willingness to do anything from getting coffee to transcribing footage gave her the opportunity to pass some of her writing along to those that might listen. By the next year, she was a hired producer, producing some of her own written work and commanding that same crew. Everything in this industry is a stepping stone — and some stones certainly are larger.
At some point, however, Buono warns that one has to realize when to say, “No,” and how to maintain passion in the work.

Saying 'no' to this one job… and then you’re sitting on your hands for a week going, 'Oh my God, did I make the right move… I’m unemployed right now…' and then suddenly this other thing happens because you’re available for it. You have to be open to these opportunities that only occur if you’re just pursuing the thing that you want to do the most.”

Somewhere along the way of growing a career, one does learn to say, “No,” and to make choices. Even the small choices about wardrobe and hairstyle, Buono would argue, are incredibly important. Your audience will perceive that you specifically selected every piece of the set for your film. While you can’t control everything, it won’t matter if someone else made the choice or if you did; so, you may as well make the ones that you do have control over count.
Meanwhile, Buono did plenty of reaching out to his idols to ask for help. He would ask questions when a director would speak at his school, write letters or make calls to ask how a DP achieved a certain effect or camera shot. And more often than not, they were eager to help. There’s a line between being a relatively nonthreatening student and being a working DP (or other professional), where one professional is asking another how to do something. In the former scenario, many professionals, Buono has found, are more than inclined to want to help. But some people are still extremely protective of their trade secrets — especially when it’s not to help a student, but instead to help “the competition.” Buono therefore suggests taking advantage of being in a student’s position.
But no matter what you do or how far you get in your career, there will always be uncertainty in your next job and in your financial future. If you want to make money, Buono recommends trying for another career: “There are a lot of easier ways to make money.” But if film is your passion, be ready for a variety of insecure times in your life.
Seeing Buono give his workshop firsthand (and having been to a variety of workshops myself), I can easily say that for those that would like to know more or have a desire to learn from a great teacher, Buono has a charismatic nature and easy flow to his workshops that makes learning easy while still being extremely practical and hands-on. His last tour was two years ago, so this is not one to pass up if you might be able to make a workshop in the cities he has yet to hit. Check out if Alex Buono is coming to you and register if possible — you won’t regret it… there are few people with as much experience.
Alex Buono's work and workshops are made possible, in part, by G-Technology's line of storage solutions.
https://www.youtube.com/watch?v=jFM5nYvCSEo
Note: You may have noticed I included audio segments in this article. Whether or not you liked it, please let me know if you liked this style or if you would have rather not have had audio clips of the interview. I like to try new things sometimes and am simply seeing if this enriches or detracts from the experience. Thanks!
Topics:
BTS
Fstoppers Originals
Interview
Opinion
VFX
Videography
Video Editing
5 Comments 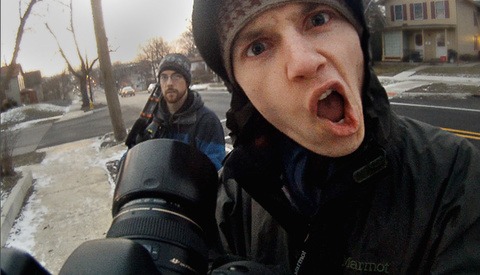 Videography / September 19, 2013
10 Tips On How To NOT Get Hired Again As A Production Assistant
Log in or register to post comments
5 Comments

His workshop looks like an amazing experience. If i were a full-time film maker it looks like a worthwhile investment.

I really liked the addition of the audio segments. I actually read the text first, then went back and listened to the audio. Very cool! It really helped drive the content home and made it more memorable.

Thanks for the feedback! Gald it worked (in the future, hopefully I'll keep in mind to make the audio even better...this was all with an iPhone set casually on the table, believe it or not...or maybe you can tell if you actually listen :-)).

I did hear some typing, so I'm assuming it was sitting next to a laptop keyboard (on a table)? The typing did get distracting from the dialogue a couple times. But was really no biggie for me. (I was listening with noise canceling headphones on, so it might have been easier for me to notice the typing because of this).

True. That bugged me, too (which I'll watch for the future...since I hadn't planned on using the audio this time..). But I think in the end, it's still useable. Thanks for the feedback again. Helps guide things for the future if there's a similar opportunity :-)