Audio is arguably the most important facet of any film or video production. There is a saying that goes: “Audio is 70% of what you see,” which means that sound makes up more of the experience than the visuals do. So while we may spend a lot of time planning for what our shot looks like, it’s even more important that we mic it properly for the best audio recording possible.

When it comes to filming interviews, there are two styles of microphone that are most often used: a lavalier and/or a shotgun mic. In the video above and article below, we’ll cover some of the basics you need to know about shotgun style microphones for capturing clean, usable audio for documentary style shoots.

Shotgun style microphones are long, cylindrical mics that are considered to be “directional.” This means that it will capture the most audio signal from whatever it is pointed at. How well it captures that sound is determined by a few different factors, including the microphones pickup pattern, room acoustics, and most importantly, the distance of the mic from the audio source.

Shotgun mics will have varied polar (or "pickup") patterns, and it is important to understand which pattern will be best for what you plan to shoot. For interior interviews, we usually go with a hypercardiod, such as the Sennheiser MKH416. Here is a great video that explains polar patterns and gives some good examples of when to use each one:

Have you ever played racquetball and noticed how much sounds echoes in the court? It makes it hard to understand what someone is saying when they talk, doesn’t it? Flat walls that are parallel to one another will reflect audio very noticeably, therefore it is desirable to choose a location where audio reflections will be dampened. Soft materials like carpets and furniture help absorb rogue audio, and variations in surfaces from things like shelving units will break up sound waves. If you’re stuck in a room without furniture and thus sound with a lot of echo, hanging a few sound blankets can go a long way to lower the amount of audio bounce.

Get Your Mic as Close as Possible

Probably the most important thing you can do to get the strongest signal from the person speaking is to get the mic as close as you can. Off-axis noises will become less apparent, and the audio will sound rich and clean. Check your video to make sure your mic isn’t in the shot, but just outside of the frame. It’s a simple thing to do, but will have the most dramatic impact on your final results.

C-Stand or an Operator?

You’ve likely heard of shotgun mics being called “boom” mics, but that is in reference to a boom pole. These are lightweight, extendable poles that have shock mounts on the end which hold a shotgun mic. 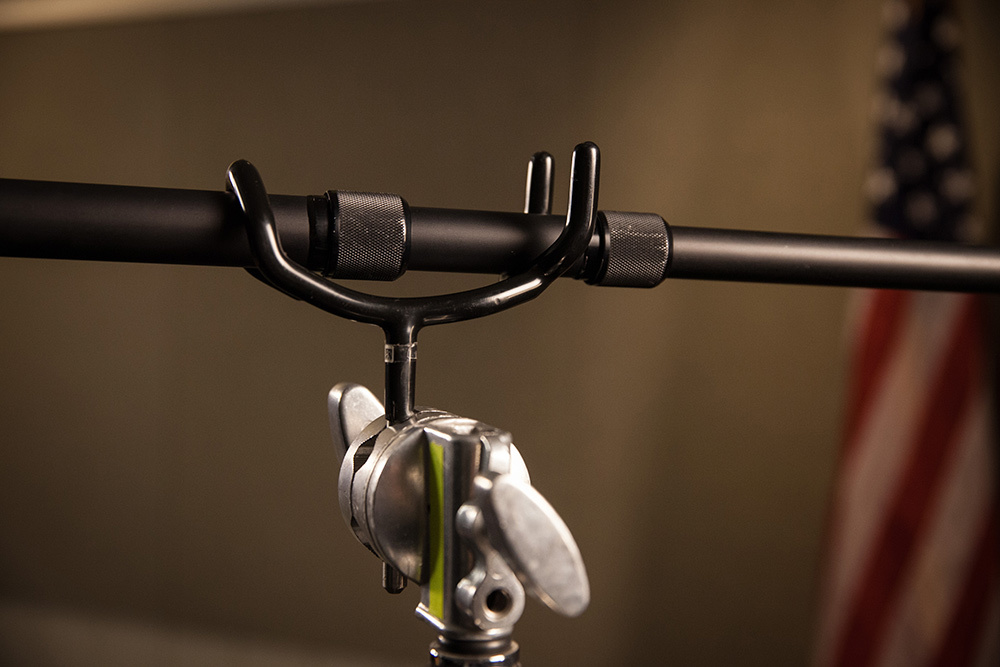 For run and gun shoots or a quick interview setup, having a boom operator is an easy way to ensure you’re always getting the mic right where it needs to be. However, for sit down interviews we find that using a C-stand with a pole holder attachment works great.

One thing you’ll notice when using shotgun mics instead of lavalier mics is that they pickup room noises much easier. Low rumbles from nearby AC units, for example, can give your recordings a minor hum that doesn’t sound bad until you cut from one interview to another you shot that day when the AC unit wasn’t running. It is good practice to record something called “room tone,” especially when recording with a shotgun mic. Recording room tone means to roll audio for :30-:60 with no one speaking, and not having moved any equipment. This captures the rooms particular sound, and gives you a clean base to either add it in over edits (for a constant, consistent tone) or use it as a sample to do noise reduction with a program Adobe Audition.

For seated interviews, why not both? Shotgun mics typically produce a richer sound than a similarly priced lav sound and I like to use a shotgun whenever possible. I will lav mic talent as a backup though. Sometimes there might be too much room noise and it becomes distracting, so I will end up using the lav audio track in the edit. (Don’t use both though, it sounds weird to cut back and forth from one mic style to the other on the same person.)

If you found this article helpful in your quest to learn more about filmmaking or video production, consider checking out our e-book, Tips for Shooting Professional Video Interviews, which includes an entire chapter on microphones and audio recording. 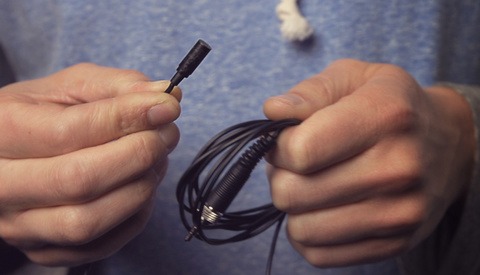 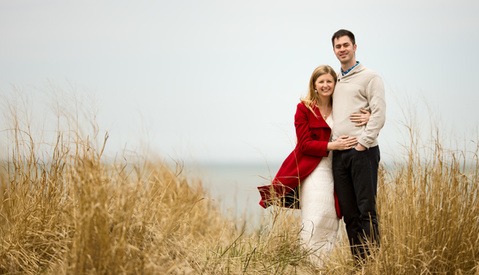 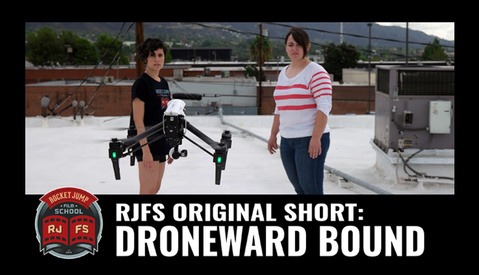 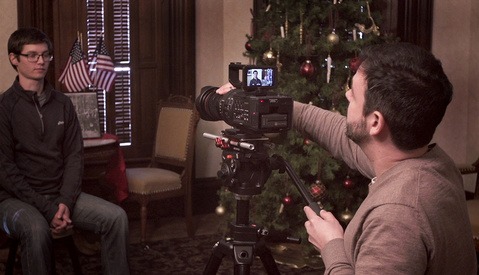 BTS / January 30, 2017
What to Look for When Picking a Frame for a Video Interview 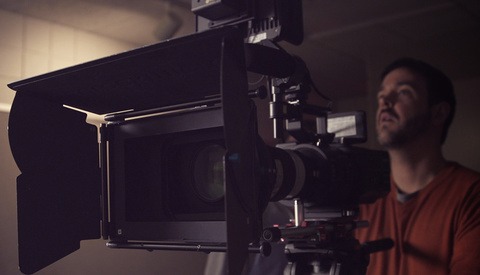 BTS / February 6, 2017
How the Focal Length of Your Lens Affects the Look of Your Video

I typically use audio from both sources at the same time in the edit and adjust the intensity of each to get the perfect sound. Does anyone else do this? I started this a year or two ago and I can't go back after discovering all the flexibility this offers.

Same here. I always dual system record for flexibility. Rarely do I rely on 1 source of audio.

I also use two sources (lav and boom) and mix them as well. I find that the lav (naturally being closer to the chest) provides more bass and the boom adds more of the environment to make it sound more natural. I want to get better at hiding the lav but still using it.

BTW, I really enjoy the articles from this author, Mike Wilkinson. Maybe its because I focus more on video and get more hyped by video centric articles but these are always extremely helpful and well done. Keep it up man!

many lav's are omnis, and omnis tend to 'go deeper'. Physics and math will tell you. being so close to the source, again, physics, it will 'seperate' the source more from the background. The shotgun/boommic picking up more room is exactly the same thing, but backwards :-) But being directional (card or hypercard or even better/worse) the effect is way less that 'backing off' an omni.

Another tool I use is the TASCAM DR-60D mk II 4 channel audio recorder (any multi channel audio recorder that has adjustable level input per channel will work). In many situations and environments I record in, this allows me to record the same source at a muted Db level, so that any loud laughter or claps, etc don't blow the levels off the scale. And I can mix in the extremely loud "spikes" into the normal tracks easily without having to waste a lot of time modifying the original track (which may have no usable quality).

Mixing multiple mics from the exact same source can cause serious comb filtering. Comb filtering isn't something that you can remove in post, and it's not particularly flattering to the human voice.

Lavs by their very design will give you a consistent audio track regardless of where the talent is in relation to the camera. Mic to talent distance never changes.

Shotguns on the other hand, are much more dependent on the location of the mic in relation to the talent.

With the quality available today in both shotguns and lavs, neither is particularly "better" than the other ... and there's nothing wrong with putting both tracks to "tape" at the same time.
But generally speaking, those two tracks (one lav and one shotgun) shouldn't be mixed together (comb filtering).
Comb filtering is random by nature, so there will be plenty of stories of folks who mixed a lav and shotgun together and "it sounded great" :)

When hand holding a boom, unless you have a boom operator with laser sharp aim, you're better off using a hypercardiod mic than a shotgun, because you can experience dropouts of your desired signal if the mic drifts too far. Also, something that most people don't realize is that cardioid patterns ONLY work at higher frequencies. ALL mics are omnidirectional at low frequencies. This means that you're going to pick up all the rumble from your environment even if you're using locked-off shotguns on shock mounts.