Behind the Scenes of My Short Film 'The Letter'

If you think this is a sci-fi horror thriller film with Transformers-style VFX you'll be disappointed. In fact, the action takes place in the 50s as a young man turns unfortunate obstacles into a romantic outcome.

Why I Made It

As this was an area of filmmaking I had never worked in, I didn't want to engage anyone else in case of a failure. This is why I raised my hand during the casting call and, as a casting director, chose myself. I had this idea for a man writing a letter as I had a sentimental fondness for all things of old time.

First I did some basic tests, starting with this outstanding setup:

Here I learned the basics of keying by watching the whole internet of chroma keying and using some basic common sense. Before thinking to myself that I was already a VFX artist, I decided to try it with the actual blue screen I was going to use for the film. Well, my conclusion was not to add "VFX artist" to my job description just yet.

The hardest part is when your screen is not lit in a uniform fashion as mine certainly was not. Another issue for me was getting rid of the green or blue border around the remaining objects. I won't go into the details of it because there's so much information around the web, but I can share my experience in keying in a separate "how-to" article. Let me know if you think would be interesting.

I'm not an Adobe user when it comes to video. I've been using a software called HitFilm, where the workflow is similar. Regardless of the tools you have, if you follow some basic keying principles, you can do it with any professional video software.

I purchased a collapsible chroma key screen with two faces: green and blue. Sounds great, but when I received it I found the surface was not well stretched on the springs and was instead more like a silver reflector colored in green or blue. The fabric was shiny and full or wrinkles. The only way to have a fairly flat-lit surface was to light it from the front. That wasn't possible because of the small space I had. I thought about purchasing a better one but decided to use what I had to force myself to learn to work with a badly lit screen.

Why a blue screen? I had a green typewriter, so it was a natural decision to use a blue-colored screen. If I had important items of blue color, I would have gone with a green screen. I made a mistake to purchase a few blue-colored second hand books. At the end, it was a great opportunity to learn to deal with that in post.

My handwriting is very ugly. I spent quite a lot of time watching calligraphy lessons with an ink pen.

I decided to practice only a few words, while the rest of the letter will be filmed at an angle, so the imperfections are not that prominent. Just for your information, I spent about $100 on different nibs, inks, and paper, but this didn't make it way better.

I filmed the short in my small living room. Having a tight space didn't allow me to light the blue screen evenly, and I had bright and dark spots that gave me a hard time in post.

A preliminary blue screen test before filming the intro scene.

For the lighting in the first part, before the power outage, I used an Elinchrom Scanlite constant light into an Elinchrom 69" Rotalux Octa for the key and one or two Red Heads for lighting the blue screen. The reflections from the room walls gave me the fill.

The second part of the film was lit almost exclusively by the candle. The camera was set to 25 fps at ISO 2500 with an aperture of f/4 and shutter speed of 1/50. The Scanlite was too powerful for a fill, so I turned it off and aimed the table lamp towards the Elinchrom 69" Rotalux Octa and used it as a bounce light source to fill in some of the shadows.

The film was created all by myself, and I didn't have a motor for the slider. How did I do the intro? I used a blue screen with markers for recording the camera movement over the table.

I filmed myself separately with the camera on a tripod. Then I used the yellow markers from the slider footage to track the camera motion using the Mocha plugin in HitFilm (there's a Mocha plugin in Adobe After Effects, too), although you can do the job with the integrated tracker. I had the static-camera footage of me set instead of the blue background and set everything to move along the tracked motion path.

There were two more places where I used a slider. One of them was when I was writing. I was writing with my right hand and sliding the camera with my left and repeated the motion several times until I got a good shot.

The third place was the push-pull camera move when the hammers of the typewriter got stuck. For those who don't know what a push-pull is, this is sliding the camera on a dolly or on a slider while zooming in or out depending on the sliding direction. This way you keep the object on the foreground at the same position in the frame while the background looks as though it is moving on its own.

I simulated multiple cameras by repeating the same action several times and recording it from a different perspective. This made me write several handwritten versions of the letter. Sometimes I used both sides of the paper, because the opposite side wouldn't be visible in the frame. If you look closely in the film you will see differences in the handwritten letters between some of the shots.

I am not new to compositing in stills photography, but with video there are way more challenges. The basics are the same: matching exposure, color, and contrast. But here you also have motion blur, motion tracking, bit depth, video compression, the need to out moving subjects, and more.

I started with keying myself from the background on the intro shot. Here's the original shot. This was so badly lit (because of the tight space) that I wasn't able to key the window blind out at all, and at the end I had to rotoscope myself out of the background. For those who don't know what rotoscoping is, this is cutting an object manually from the background on a frame-by-frame basis. The video software helps you a bit, so you don't start from scratch on each frame.

On the exterior shot, I was able to key myself and the window blind out, but as you can see from the original plate, the window blind was outside the blue background. I was very aware of that, but because it wasn't a moving object as I was, I decided to fix it post. Frankly, I didn't have any other options here because the background was too small. 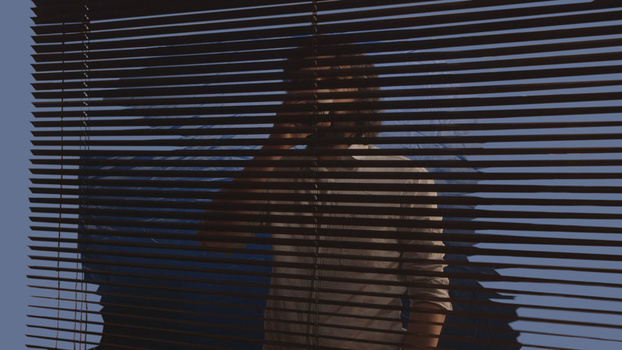 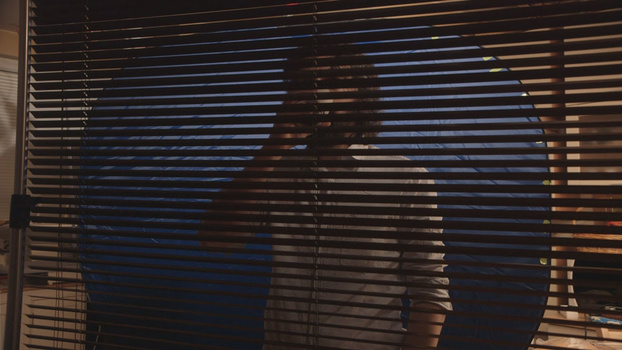 I exported a still frame and cut out each element from the window blind. Finally, I filled the space between them with a solid blue color. This helped me to key out the sides of the window blind while I used only the middle portion of the video to key myself and the middle part of the blind separately.

My living room interior has white furniture that wasn't suitable for the film. This is the reason I went for the chroma key background. A few years ago I started learning how to work with a nice free 3D software called Blender. Before working on this film I had to spend about four days watching long tutorials in order to refresh my memory.

Of course, I could have photographed suitable backgrounds, but learning something new would not hurt. After about a week of making objects and textures, I was able to render the final version of the interior and the exterior. This is something an experienced 3D artist would probably do in less than a day.

This is a breakdown of the visual effects that were used in the film:

The audio was all done in post. I recorded the sounds after I finished cutting and compositing. Here is a screenshot from the audio editing window.

I'm using a separate software for audio editing, but this can be absolutely done inside HitFilm or any other professional video editor. Just as for backgrounds for compositing, I have a library of sounds I record for future use. This time I used old recordings of rain and thunder.

Personal projects have been always the driving force for my business. They help me learn new things before taking on commercial work that requires such skills. It doesn't take just one project to get better at something. This is why I'm already planning my next personal project. What do you work on to improve your skills?

Composite / August 5, 2020
Nike's 'You Can't Stop Us' Amazes the Internet With a New Spin on Familiar Techniques

I am quite impressed with what you accomplished on the CGI part after only a week learning Blender and a week creating the environment.

And overall, what do you think you did well and what you could have done better ?

I have been using Blender for other projects in the past but I have forgotten many of the details. It took me 3-4 days to refresh my memory by watching tutorials and an extra week to make the environments.

I could have done better the whole chroma key lighting if I got another fabric, but as I said, I wanted to accomplish it the hard way. There are lots of things in the CG itself that don't look so real like the cityscape, the books. The calligraphy also is not what I wanted it to be. The rain audio is also something that can be improved. I'm happy with the overall result, because I just wanted to practice some CG enhancements using green or blue screen. The video file could have ended up as a "test.mp4" temporarily sitting on the Desktop and then deleted.

Wow. I watched the short film before reading further in the article and throughout I kept asking myself, where is the VFX? Nicely done! The best VFX are the ones you don't notice. :)

Thanks Wes, I appreciate that. The best VFX are not noticeable when you don't expect VFX at all. In this case sometimes the VFX artist can be sloppy :) If the film had robots and flying cars you would be more sophisticated in your assessment :)