I Shot A $15,000 Per Night Penthouse With A Single Speedlight (And You Can Too!)

I recently visited the Atlantis Resort in the Bahamas with Lee and Patrick to scout out locations for my upcoming architectural photography workshop and we were pretty much given unfettered access by the Atlantis marketing department to shoot whatever we wanted. First on the list? The $15,000 per night penthouse suite. I only brought a minimal amount of gear with me, but wanted to show you the possibilities for where we'll be shooting and what you'll be learning.

Our original goal was to find a location to use as a setting for the architectural photography classes and to film some video showing off the incredible location that the workshop was being held at. That video, which is admittedly pretty hilarious, can be seen here:

Since this was only really a scouting trip, I only brought with the bare necessities in terms of gear. I usually work with what many consider to be small amounts of gear, but even this was hardly anything for me. One camera, a couple of lenses, and a speedlight. While we were in the Bahamas, Lee pitched an idea to me: what if we shot something while we were here, using the least amount of gear possible, getting the most spectacular results? I was all for it - but it was an exercise in creativity and stretching gear as far as I could. I knew I'd have to think outside of the box on this one and work with the light and gear (some of which ended up being borrowed!) I had to make it happen.

We talked to the marketing department, who was kind enough to offer access to any open room we wanted while we were there, but also told us that during the workshop, we have the same offer on the table: any open rooms or spaces that we want, we will be able to shoot. So while I cannot guarantee access to this same exact room, we'll have access to some similar shooting material. It may even be a better location - the famed 'Bridge Suite', which sells for $75,000 per night, is also an option, granted that it is open. So expect an incredible venue, shooting some of the world's most luxurious hotels and restaurants as the background to the workshop.

Anyway, back to making this picture with one speedlight. Shooting it during the day wasn't really an option - as the high vaulted ceilings and dark furnishings would not be conducive to the minimal power that a speedlight outputs. I thought about lighting it piece by piece and compositing it, but I knew that it would be a stretch, even using all of the tools that Photoshop offers, to make a good picture during the day with just one light. In order to leverage the most out of my little light, I opted to wait until twilight - when contending with the strong ambient exterior light would not be a problem. This would allow us to capture the dim, moody interior lighting, and a (hopefully) great exterior scene.

As twilight approached, I found my composition and got to work lighting the space in pieces. Sadly, cloud cover ruined our epic view, so I actually composited in a scene from an entirely different location. I'll often head to a park near my house in Santa Monica, California, and capture pretty sunsets just for this purpose. So the window view doesn't have anything to do with the Bahamas at all - but is from thousands of miles away! Here's the sky we managed to capture that night, which as you can see, is pretty bland: 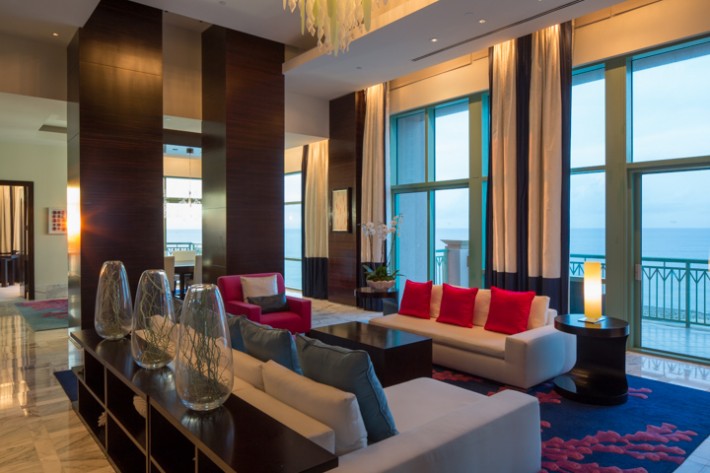 And while this shot isn't horrible by any stretch, I do think that our finished and lit image with the new view and Photoshop work (which included a vertical tilt shift stitch) is quite an improvement! There are of course an endless amount of ways to shoot any space, and by just using one little light we brought a whole new feel to the room. 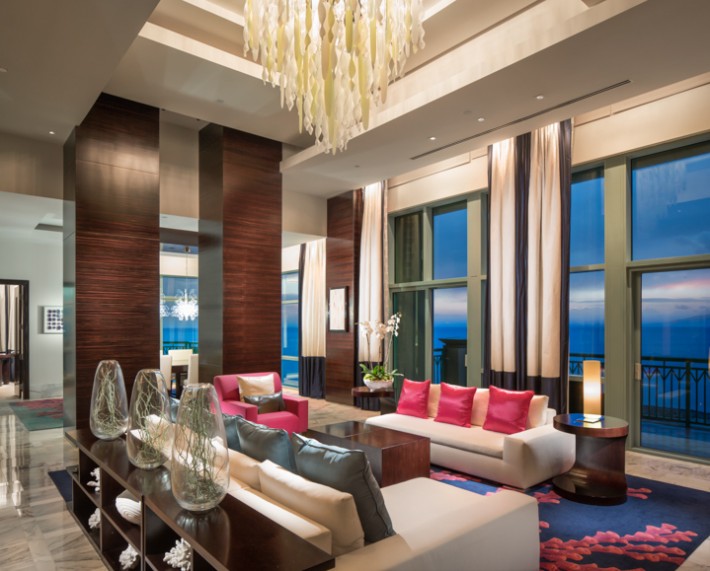 So if you're interested in shooting architecture, hotels, interiors, or just making awesome photos with a minimal amount of gear, I highly suggest you check out these workshops. Space is limited, as I want this to be an intimate, hands-on workshop, plus it is difficult to teach architecture to a ton of students at once.

The classes I'll be teaching include:

Introduction to Light Painting, Photoshop, and Compositing: The perfect class to get your feet wet in this type of work. I'll show you all of the basic Photoshop techniques that I use to create my images, and how to get the most out of the program to add a little zing to your architectural work. I'll also show you how I use light painting to light an object in various ways, how to re-light an object in photoshop, and common techniques I use to satisfy my client requests on architectural commissions. These will include things like capturing windows, replicating objects, correcting difficult lens distortions, and cloning pretty much anything you can think of.

Photographing and Lighting an Interior Space: In this class, we'll shoot an interior space, probably similar to the one above, and I'll walk you through the steps I take to shoot it, light it, and put it together in Photoshop. This class is heavy on both traditional field techniques and digital capture and Photoshop techniques, so expect a hard working afternoon with a ton of information!

The Complete Guide To Photographing and Lighting Interiors and Exteriors: In this workshop, you'll tag along with me shooting a professionally-designed interior during the day, and during dusk and twilight, you'll accompany me and learn every one of his techniques as he shoots his signature twilight and dusk shots. If you've ever wanted to take your interior and architectural photographs to the next level, or wanted to learn techniques that you can incorporate into your own architectural, interior, or real estate shots, this workshop will prove to be invaluable. Lighting, staging, composition and Photoshop techniques will be taught, and you'll walk away feeling like you can tame any situation to make even the most demanding clients happy. This class will expand on the technicality of the first two classes, so it could be a great capstone to the week. This class will also work for you if you're already familiar with shooting and lighting architecture and interiors.

Like I said, we have access to some pretty incredible locations and for those of you looking to add some spectacular shots to your portfolio and skills to your repertoire, this will be a fantastic class for you.

In the next few days, we will be releasing a video giving you a tour of some possible workshop locations as well as some more behind the scenes looks at how I lit the above shot, so stay tuned.

If you can't make it to the workshop for some reason, I also suggest that you check out my tutorial 'Where Art Meets Architecture: How To Photograph Real Estate, Architecture, And Interiors,' where I discuss my techniques in depth on a number of architectural locations. The tutorial is available as a digital download so you are free to start watching as soon as the download completes. 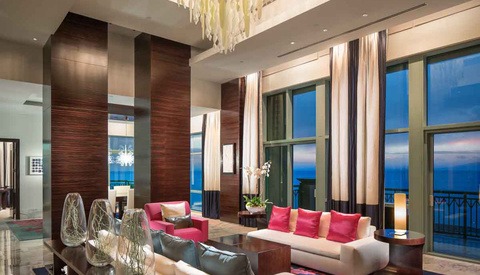 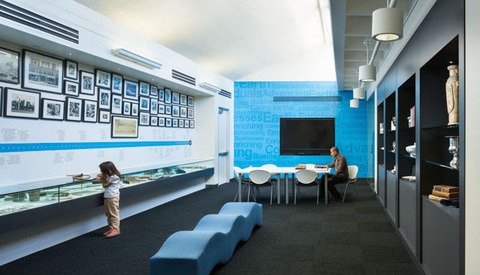 Composite / March 24, 2014
BTS: Building An Architectural Interior Photograph From The Ground Up 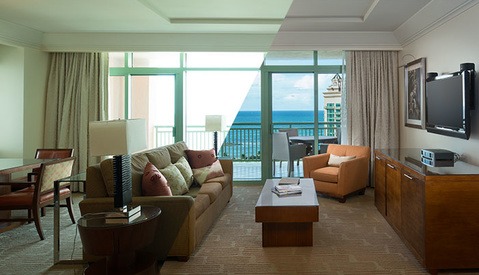 Architecture / January 15, 2015
How to Photograph and Retouch a Hotel Room in 15 Minutes

lmao workshop in the Bahamas, you just know the kind of rich-ass hobbyists they market these workshops at. You talk about shooting architecture with minimal gear - but the people with minimal gear (usual means minimal budget) are not going to have thousands of dollars to take a 5 or 1 day trip to the freaking Bahamas for your workshop. These guys are insane.

I can def understand your point but I will say, I was in the room and it did actually look like that in person. The main issue is the camera could never capture what the human eye saw in a single exposure because the dynamic range was beyond the 10 stops a camera can record.

If you look at it from another point, all these super high end luxury hotels are using photography that does look more like CGI. When I goto Vegas and look at the marketing material, I often thought it was CGI and fake....but then I learned that it's actually multilayered photography similar to what Mike is doing. While it might not always be 100% true to reality, this is what commercial photography looks like and it is the main reason resorts can sell these spaces for ridiculous prices. Once the money is spent on crazy architecture and fancy interior design, the photographs have to capture those spaces in the most extravagant light.

Fake light in a space like this kills the romance. Just wait for twilight and shoot long exposure. Worx every time in this situation. Maybe I would bracket a few stops for options. Pinlights and strobes are nice for cavernous spaces., Light painting for large / dark exteriors is fine but this shot should be a piece of cake for any decent DSLR.

The maximalist approach isn't for everyone or for every situation for sure. I believe the intent is to show an example of how these methods will be utilized at the Atlantis. If you check out Mike's portfolio, there are plenty of examples of mood lighting.

Isn't it great that we live in a world where people are free to choose how they want their images to look, and clients are free to choose which photographers they'd like to work with? There is never a 'right' or 'wrong,' just what is appealing. Of course just waiting for the perfect mix and shooting a long exposure would 'work' but I think it would also look pretty boring. I do my thing, you do yours :)

"Let every eye negotiate for itself and trust no agent."

Mike, you delivered a wonderful response to this.

While this seems like a really great class (and I mean no offense to Mike), but I come here for articles and learning techniques. This had zero information about how to shoot a hotel room with a single speed light. It is an advertisement for a workshop. Can we please label articles instead of using click-bait? I promise i'll still click on them even if i'm not interested :)

It's comingggg I promise :) We filmed a whole video about this but I wanted to get something up so people could see the locations we'll be working in!

I'll allow it :) I just booked a gig shooting before and afters or renovations and only carrying a speedlight seems wonderful.. So i'm really excited!! get a move on!!

So show me how to shoot this with one speedlight...I'm waiting...