How Photography Is Used to Solve Crimes, Murders

From sketch renderings to video surveillance, law enforcement uses many techniques to piece together clues for crime-solving. Details and memory often fail us, but there's one medium that never forgets - photography.

Forensic photography is undoubtedly the most widely practiced and arguably useful visual medium in solving serious crimes. We are all familiar with its importance.

Crime scene imaging has been around since the inception of the photographic medium. The grandfather of the genre, Alphonse Bertillon, developed the first process for this type of work. Using a large format camera, he would capture unique angles like bird's-eye views of the body, then later paste the print over a grid for court uses. The result was often a surreal image from a vantage point not normally seen at that time. Bertillon also was the first photographer to capture mugshots and create the standards for profile (head on, side profile, etc).

A mugshot by Alphone Bertillon. Photo under CC via Wikimedia.

Other photographers further developed his techniques by including important details and evidence: nearby buildings, blood formations, fingerprints, and so on. Throughout the 19th century, forensic photography of crime scenes and criminal portraits became commonplace. Policemen and amateur and professional photographers all participated.

The medium of photography was trusted to be accurate, so much that one photographer names William Mumler in the 1860s exploited this not-yet-well-known medium by offering "ghost portraits" with deceased relatives. These photos were in fact double-exposed prints made to look like a translucent figure had stood with the family in the image (Think placing a hazy image of a man who vaguely resembled the deceased into Photoshop and putting it at 20 percent opacity over the subject).

The "Crossing Over With John Edwards" of his time, Mumler exploited grieving peoples with photography until he was found out and put on trial. Image under public domain via Wikimedia.

Through gaining favor of both the local police as well as mobsters, this darkroom expert who mid-life switched his photographic focus to murder had a leg up on crime information. Between inside tips from gangster friends and his own police scanner radio on hand, he often arrived at a crime scene before law enforcement.

Today you needn't chase down sirens or be a professional investigator to capture important crime images. Now more and more amateurs are photographing images that wind up crucial to investigations and trials.

Let's visit the world of "guerilla crime photography" populated by these non-professionals. You'll find the occasional Good Samaritan as well as websites that allow citizens to utilize photo and video as a medium for catching bad guys.

With the help of professional and non-professional photography, citizen crime-solvers can take matters into their own hands. You might be surprised that Everyday Joes whose main hobby - obsession, perhaps - is to try cracking cold case murders on their own. You might be even more surprised to learn that sometimes they succeed.

There are also Reddit communities (often referred to as subreddits) whose sole purpose is to solve crimes by pooling together data, photos, and sometimes video evidence.

One large subreddit named the r/rbi (Reddit Bureau of Investigation) boasts 77,200 members who attempt to solve anything from stolen laptops to murders. Much of RBI's investigation of petty crime being solved relies on photographs or video surveillance.

One concerned redditor posted a photo of a computer chip-looking device he found inside his extension cord. With the help of r/RBI and r/whatisthisthing, he discovered it was a surveillance bug complete with microphone and sim card that could be used for eavesdropping.

In another case, a hit-and-run was solved on r/RBI with the help of a photo posted of a headlight from the crime scene after other users had pooled their resources and knowledge. While it's easy to criticize amateur detectives for their tendency to botch a serious investigation (more on that later), something can be said for the power of large group of people gathering their resources on the largest information-sharing network in the world.

Hit and run scene. Image under CC via Wikimedia.

The Doe Network and Web Sleuths are both popular online communities for people who want to utilize their free time for the common good. However, you can guess that even people with the best intentions but not formally trained in investigating make serious mistakes. Following the Boston Marathon Bombing incident, redditors in the r/RBI group singled out a man with a backpack seen on surveillance who turned out to be innocent, deceased in fact from an unrelated event. Several other innocent-but-accused people have dealt with death threats and harassment from the Internet as mistaken identity witch hunts march on.

But despite the "amateur detectives" who seem to sometimes make things worse for investigations, there is one man who seems to posses the patience and wits to gather the appropriate data.

A lone citizen sleuth named Billy Jensen who describes himself on his web site as an "American true crime investigative journalist" has devoted his life to solving cold case murders. His method of helping catch killers is to gather important data on a case, is using targeted Facebook ads.

In one of the multiple cases on which Jensen made critical contributions, he compared the widow-peaked hairline from surveillance footage of a murder outside a Chicago liquor store to thousands of mugshots from an online database. Jensen identified the suspect, Marcus Moore, and began watching his every move on social media. In the meantime, he provided his leads to the authorities. Jensen later hit the jackpot when Moore posted a photo of himself which revealed a Minnesota car in the background. The suspect was eventually arrested and charged with murder. The victim's cousin afterward was quoted as saying “Billy was a big, big part of Marcus being in jail. Without his information, I don’t think we would be where we are now.”

For photographers, it's easy to become frustrated by everyone having a camera in their pocket. One has to consider the potential safety and justice our current situation can provide, however. For example, a web site named EvidenceUpload.org was built for the sole purpose of gathering photography and video from witnesses to a past terror attack. It was launched by a team of entrepreneurs from Boston to tackle a couple of issues with media uploads to authorities: it can difficult to send large media files to authorities, plus important information like GPS coordinates and other metadata can get removed in the upload process.

How do you feel about the idea of the public gathering information to solve crimes? Do you think photos and videos submitted anonymously by amateurs should be used as evidence, or are tampering and accuracy too much of a concern? Please share your thoughts in the comment section.

Lead image by stevepb via Pixabay. 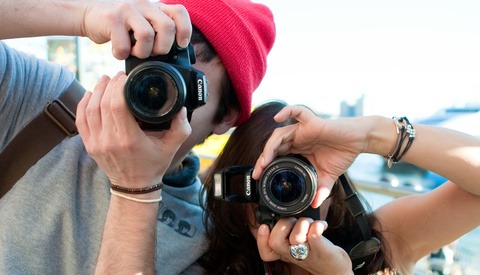 As a retired police officer I will tell you that anonymous photos cannot be used as evidence. There needs to be a strict and strong chain of custody for any evidence to be submitted. The photos can be used as an investigative lead however. Every little bit of information is helpful in solving crimes, particularly older, or cold, crimes.

Although what you assert is broadly correct, strictly such evidence is admissible per the rules for hearsay.

Like a lot of things, the plethora of cell phones is used for good and not so good. I agree with Rob Yandow's comment re: allow police to use them for leads, but not necessarily evidence.

This article is a missed opportunity to really explore the world of forensic imaging. It starts off promising enough, with a discussion of the history, but then veers into a discussion of citizen sleuths, an interesting discussion, but not really "how crimes are solved". A Reddit group, really?

What about alternative light imaging? What about true forensic imaging, using many techniques that most photographers don't know about? (Anyone ever buy a $5000 60mm Micro-Nikkor? It's a thrilling experience. Google Coastal Optics). What about lighting techniques used in forensic and conservation photography?

Instead we get a discussion about people with their iPhones - fair enough. More of a legal than photographic issue.

I have already considered the current technologies but each would warrant an article themselves. I'm considering it still. Thanks for reading!

I have one of the UV-Nikkors that Coastal Optics based their designs on. The are a fascinating piece of lens technology. If you want to talk more about it, or get some sample photos, let me know.

Please do send it!

Do you have a full-spectrum/uv camera or a film camera with UV film?

All due respect to Mr. Mason, I have to agree with Mr, Toth. Not a bad piece at all, but it ended up being about the Reddit investigators, not the photographers or the photography. I kind of saw it going off that path when The Famous Weegee received an Honorable Mention instead of full marks. Of course there have been entire books dedicated to his works, and he really did do a lot wrong. But sometimes that's the best way to learn about how criminal investigations have evolved.

A lot could have been made of this piece but it was a touch too short and the timelines were odd. Half was about crime photography from late 1800s to early 1900s. And then there was a full skip of about 70 years right up to the last decade.

But I do hope to see more from Mr Mason on the subject. Excellent writing and he is clearly knowledgeable of the subject. Thank you.

I think having as much information as possible to help solve crimes is great, so that includes any camera footage. And don't forget the value of CCTV cameras which are now everywhere. (I get why there are way more evidentiary requirements for court submissions.)

I often think how much more intelligence we would have had if we had today's mobile technology and ubiquity on 9/11. For example, we have only one shot of the first plane hitting because of a French team doing a project who happened to have the cameras already rolling. I would expect that on any pleasant weekday at 8:50 a.m. in 2018 there must be at least 100 and maybe waaaay more still shooters with their phones, and a good many doing videos as well.

Totally separately, I did decide when it was way too late in my life that if I were starting all over I would be a forensic photographer. I can't think of a much more fascinating line of work.