Last week I posted a gorgeous video from Wolfe Air - their promo reel for aviation cinematography, and explained a bit of the process behind it. This week, I've found and put together a few videos which detail how they equip their planes and helicopters with some of the most advanced camera technologies available, and it's pretty mindblowing. In these videos, Wolfe Air loads up a Learjet with untold amounts of gear (including 3 RED MX cameras), walks us through a RED Epic mounted on a helicopter nose with a 24-290mm lens, and explain the reasoning behind all of their aerial platforms.

In the first video, an employee of Gyron (Wolfe Air's gyroscopic technology offshoot) giving an explanation of how they mount and use a RED Epic and Angenieux Optimo 24-290mm lens on a helicopter, as well as explaining their setup on a Cessna with a below-the-belly mounted gyro and gimbal for 360-degree shots:

And here, we see a timelapse of Wolfe Air loading up their Learjet with gear before heading to an international shoot:

Below, a montage of footage shot in Alaska (looks to be outtakes from 'Frozen Ground', which appeared in the featured video) with the aformentioned setups:

And another reel from Wolfe Air of commercial aviation using the setups explained in the above videos, albeit not as epic as the most recent one that we just posted:

Just in case you still haven't seen it, the video that we posted last week (which is worth a watch again even if you've seen it before)

And finally, here's an extended compilation of footage from a Cathay Pacific Cargo shoot - clips of which can be seen in their most recent reel, so you can get a feel for what an entire shoot from Wolfe Air might look like and entail.

Ok, so they have to ship the plane I guess? How long does that take, and how high of a cost is that would you imagine? I mean the whole system seems super expensive, obviously, for such a niche market, but that just blows my mind.

Ok smart ass. Maybe next time watch the video where they say they're preparing a plane for international shipping and then answer. Seeing as a Learjet 25 has a range of about 1500 miles and to fly the plane between New York and London is 3500+, I'll let you figure out why they maybe need to ship the plane...

There are MULTIPLE routes from New York to London with no leg longer than 1500 miles. They've been doing it since World War 2, when planes had ranges far less than a Lear 25 but had to get from the U.S. to Europe. No "shipping" requried.

The plane looks like it's lacking a nose cone. Not sure if they would fly it without that. Same would then apply to shoots when they needed the Cessna or the heli. Pretty sure Red Bull has to ship their heli's too.

And I have a feeling this isn't a 25D. But point taken on the flight path.

First video in this post shows the same Lear with its nose cone in place. Video of the nose cone off shows guys working in the compartment, thus requiring that the nose cone be off the plane.
So they put the nose cone back on, and then they fly away to London.

The only aircraft I've ever seen shipped are helicopters and airplanes that were seriously damaged. You can't just pop the wings off. I've made the trip from New York to London in planes with considerably less range than a Lear. New York - Labrador - Greenland - Iceland - England is an example.

they dont ship the plane, they wrap an prepare the equipment for international shipping.

With some smaller aircraft shipping makes more sense than flying some times; usually they remove the wings and some other stuff and put it all in one of those big (20 or 40 ft) containers and send it on a boat. Depending on the locations, that kind of shipping would take weeks or months. I don't know the cost for a Lear 25, but for something smaller it's still multiple thousands.

That said, it looks to me like Wolfe Air probably freights their camera equipment and flies the plane. Without all the gear/crew on board they can definitely get the full range out of it; they may even install ferry tanks. In any case, the Lear 25 can easily handle the typical north Atlantic ferry routes.

Although the wording led one to surmise that the Lear was being prepared for international shipping, I believe it was the gear that you saw them rolling out in big cases. The jet will no doubt take the great circle route to Europe via Bangor, Newfoundland, Greenland, Iceland , etc.

I am headed out to spend some time with Dan and his crew to get familiar with all the gear for a corporate aviation film that I'm directing and shooting this year. In answer to the cost questions, yes, it's crazy expensive, but not unreasonable when you consider what is involved both in technology and just direct costs, A Lear 25 is one of the quickest ways to turn money into noise that anyone has ever devised.

Another consideration is that there are only two credible sources for capturing this type of footage (not the helicopter stuff, there are numerous companies that can give you that service) Clay Lacy has a Lear that involves a periscope set up and a more traditional Hollywood movie camera , and Dan has his innovative Lear with hard points for mounting camera pods under the wing, etc. The beauty of Dan's operation is that it's designed for state of the art cinema and still capture. I'll know a lot more once we get to know one another, but from what I know at this point, Wolfe Air has put a tremendous amount of time, energy and money into a truly unique shooting platform, and very importantly, one that easily matches speeds with faster subjects . I normally use a WWII B25 with the tail removed for my air to air still and cinema assignments, and while the Mitchell is an incredible platform in a lot of ways, if your subject's envelope has a bottom end of 200 knots, you are at an immediate disadvantage. 200 knots is loafing for Dan's Lear, not to mention the variety of perspectives his system offers. 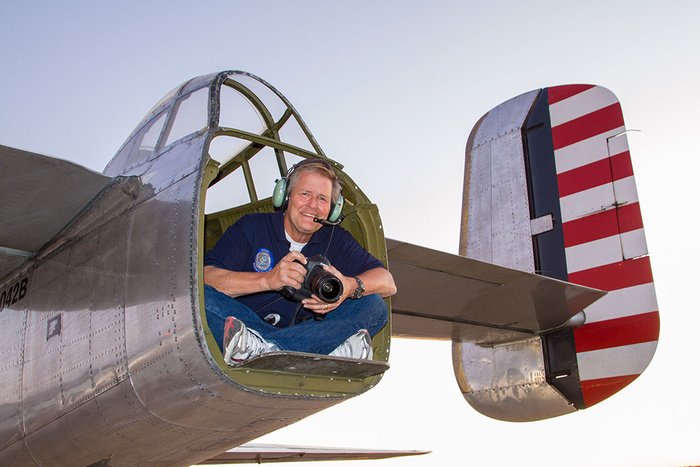