Fujifilm X-E4 Dead in the Water?

The Fujifilm X-E4 (set to replace the older Fujifilm X-E3 this year) seems to have been axed, according to reports on Fujirumors. However, it's not just the X-E4 that's finished before it's begun, the entire X-E line seems to be cast to the wayside as the X-E3, now discontinued, might be the last of its generation. 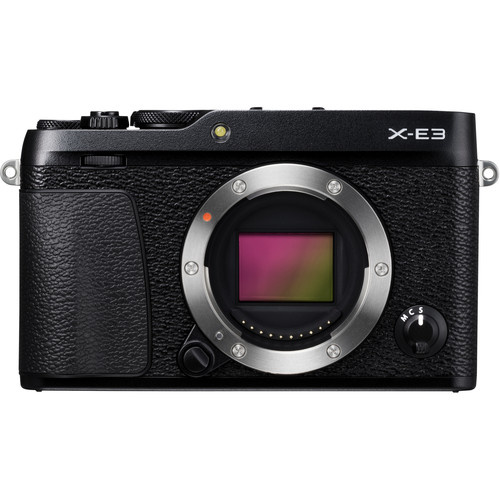 The Fujifilm X-E3, now discontinued, looks likely to be the last of the X-E series line

The X-E3 packed a lot of features inside a small, compact, minimalist design, reminiscent of rangefinder cameras, which many Fujifilm fans loved. We would expect the X-E4 to have even better features, higher resolution and improved video capabilities. So it's a shame we may never get our hands on it, if the rumors are true, because it's been nearly three years since the X-E3 was released. Fujirumors themselves are struggling to find a reason behind this rumor:

Maybe many of you will agree with Fuji’s decision. Maybe you will think Fujifilm has to simplify and streamline its line-up. And maybe it “rationally” makes sense to drop the X-E line.

Maybe the only reason is because the X-E line has had low sales? Nothing is yet officially confirmed, but in case the X-E4 doesn't surface, you can still pick up the Fujifilm X-E3 body only for $699.95. See below for a summary of the X-E3's specs.

I certainly hope not. Been thinking about buying an X-E3 because they're so cheap right now, but was going to wait to see what an X-E4 offers, especially if it has a tilt screen. They're a great middle ground for those that don't want the price or bulk of an X-Pro and with the 27mm lens they're incredibly compact.

I could see them axing the x-A line. But the X-E? I was actually planning on getting the X-E4 as a backup to my X-E3. I still occasionally use my X-E1, instead of the X-T3, just because it's so light and convenient. Like when I take my kids to the park, and don't anticipate shooting, but just in case.

Cue the comments, this was the greatest camera ever, yet forget how the reviewers slammed the X-E3 in comparison to its then company, or hold outs for the next X-T
Also why quote fuji rumors? Site is a troll hub especially the main contributor and they've gotten many things wrong or twisted around. Same site that said the X-H2 was dead.

I don't recall the X-E3 being "slammed" at all. I recall pretty positive reviews.

My only issue with it was the removal of the D-pad, though that did allow the length to shrink a bit, but that's the direction Fuji is going on a lot of their cameras.

I've just bought an X-E3, and I'm really enjoying it. Small, light, great image quality, easy to use and lots of flexibility. I assume Fuji just don't think they are selling enough for an X-E4, but it is a shame

They'd sell them in record numbers if they were not so loathe to incorporating an articulating display into the system. I'd love to have one for My bike tours and most daily shooting.

I hope, not. It's too good a camera to abandon. The LCD design must be updated (to something like the Panasonic S1 -series latest, or Fuji X-T100's), and so must the sensor, and an IBIS is long overdue as well, but otherwise it is a lovely camera. Beats any similarly-priced (and many more expensive) non-Fuji counterpart. A version with the said improvements would make for the perfect travel camera. As a cycle tourist, I'd love to have one at hand on My multi-week continental tours. A perfect travel combination with the 50mm F2.0 or any of the 35mm Fuji lenses.

I was a xe user for a long time but it seems weird to kill it rather than add the features that made people buy other cameras instead. i.e. the only reason I bought the xpro2 was due to the ability to tether, I don't care about weather proofing. I would rather have the fnc button set to iso than the xpro 2 iso dial. I hope they change their mind on this.