Fstoppers Interviews the Photographer Who Turned Disney Princesses Into Queens

Photographer Tony Ross and Designer Nephi Garcia imagined what Disney princesses would look like as fully grown queens, and the concept resulted in this wonderful series that captures the imagination and unites daughters and mothers and mother-in-laws. Check out the final images and go behind the scenes of this Disney-themed shoot.

I don’t know about you, but I was a Disney fanatic when I was a kid. My parents told me that the first time they took me to Disneyland, I started shaking with excitement by the time we hit the parking lot. I distinctly remember screaming with glee when I met Tigger. For many of us, Disney classics are inextricably linked to our childhoods and provide fond memories. And perhaps the most iconic set of Disney characters are the princesses.

For Mother’s Day this year, Photographer Tony Ross and Designer Nephi Garcia came up with a brilliant concept: Disney princesses reimagined as the queens they would become. The duo took the concept even further, though: the queens would be played by the models’ real-life mothers or mother-in-laws. They saw it as a tribute to the bond between mother and daughter. Some of the mothers and mother-in-laws were a bit hesitant at first, not being models themselves, but all were thrilled once they tried on Garcia’s intricate and entrancing costumes and quickly jumped into character. The entire concept came naturally to Ross, who is himself a Disney fan, his favorite film being “Tangled.” 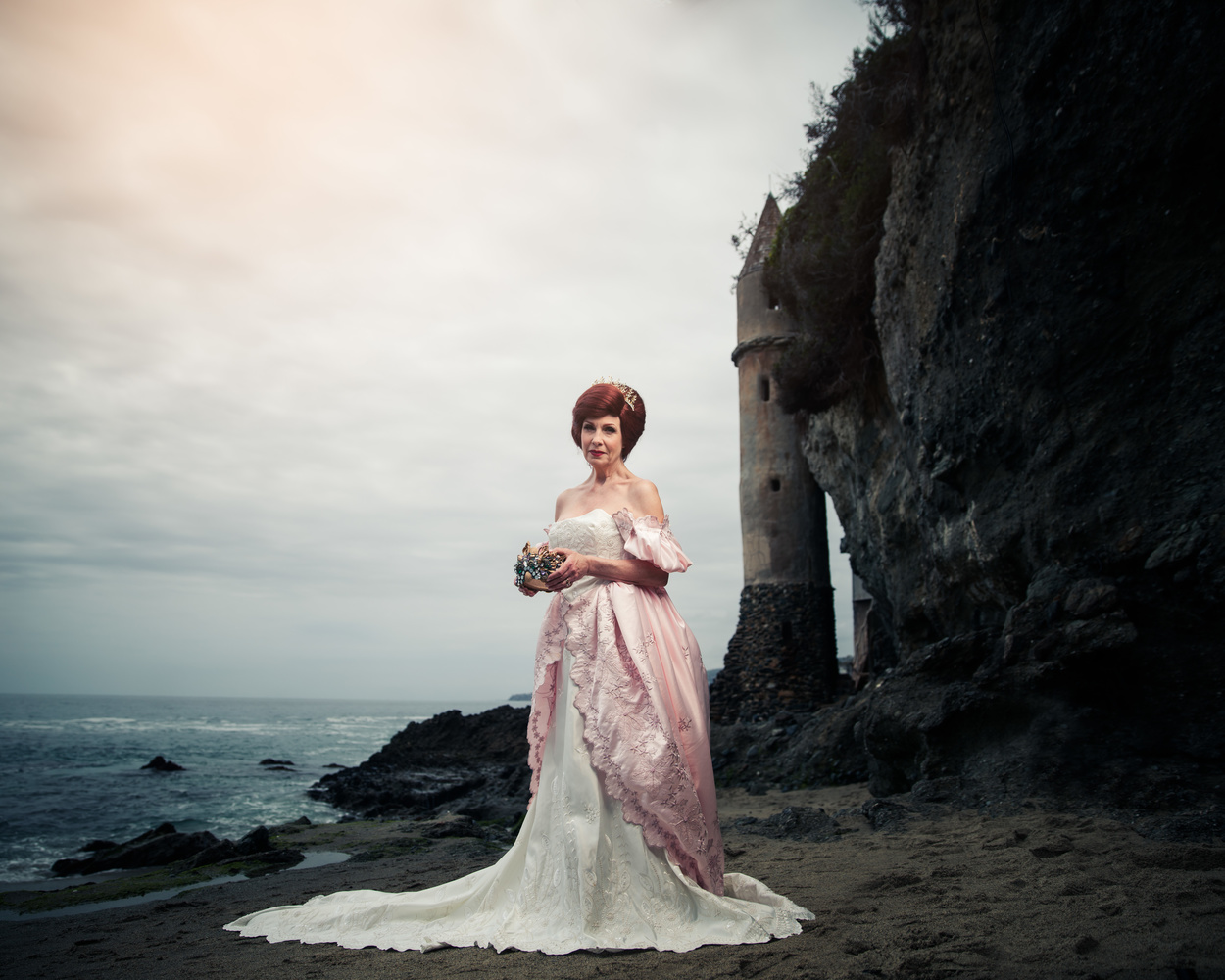 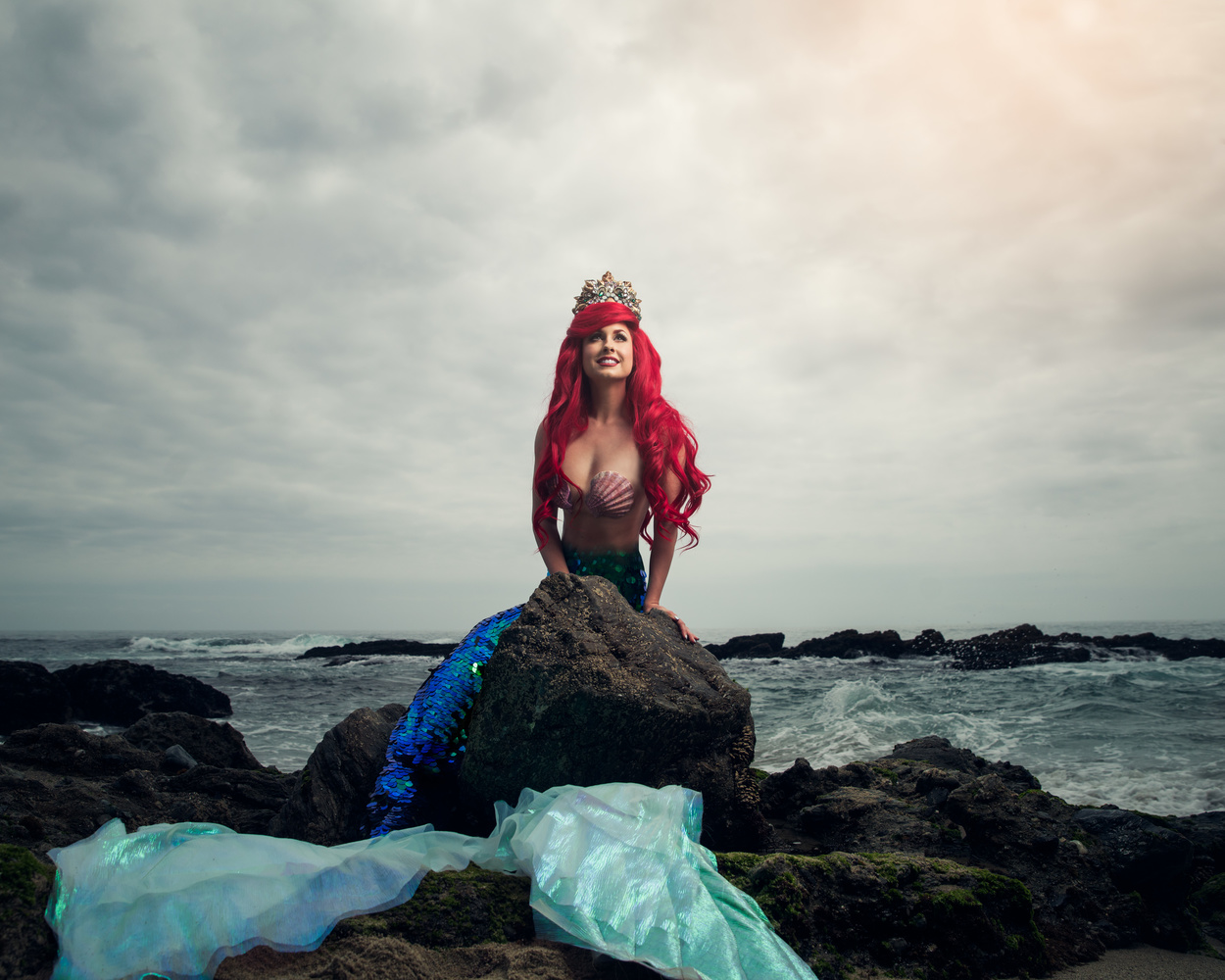 Ariel from "The Little Mermaid" (Traci Hines and Elizabeth Oden)

Finding the right locations for the shoot took some careful consideration. Garcia and Ross began by deciding which part of each princess’ respective movie they wanted to represent, then found places that matched or embodied those themes, such as a beach for Ariel from “The Little Mermaid” and downtown Spanish architecture for Elena from the series “Elena of Avalor.” And while a big draw of the project was certainly the Disney theme, Ross notes that that was more a vessel for the true theme of the series:

The idea of the project was to show how much daughters and even sons resemble their mothers and how much they are a part of us as we grow up. They are irreplaceable and such a huge part of our lives. Our fully grown and matured selves (even 30-40 years into the future) will be so much due to our mothers. 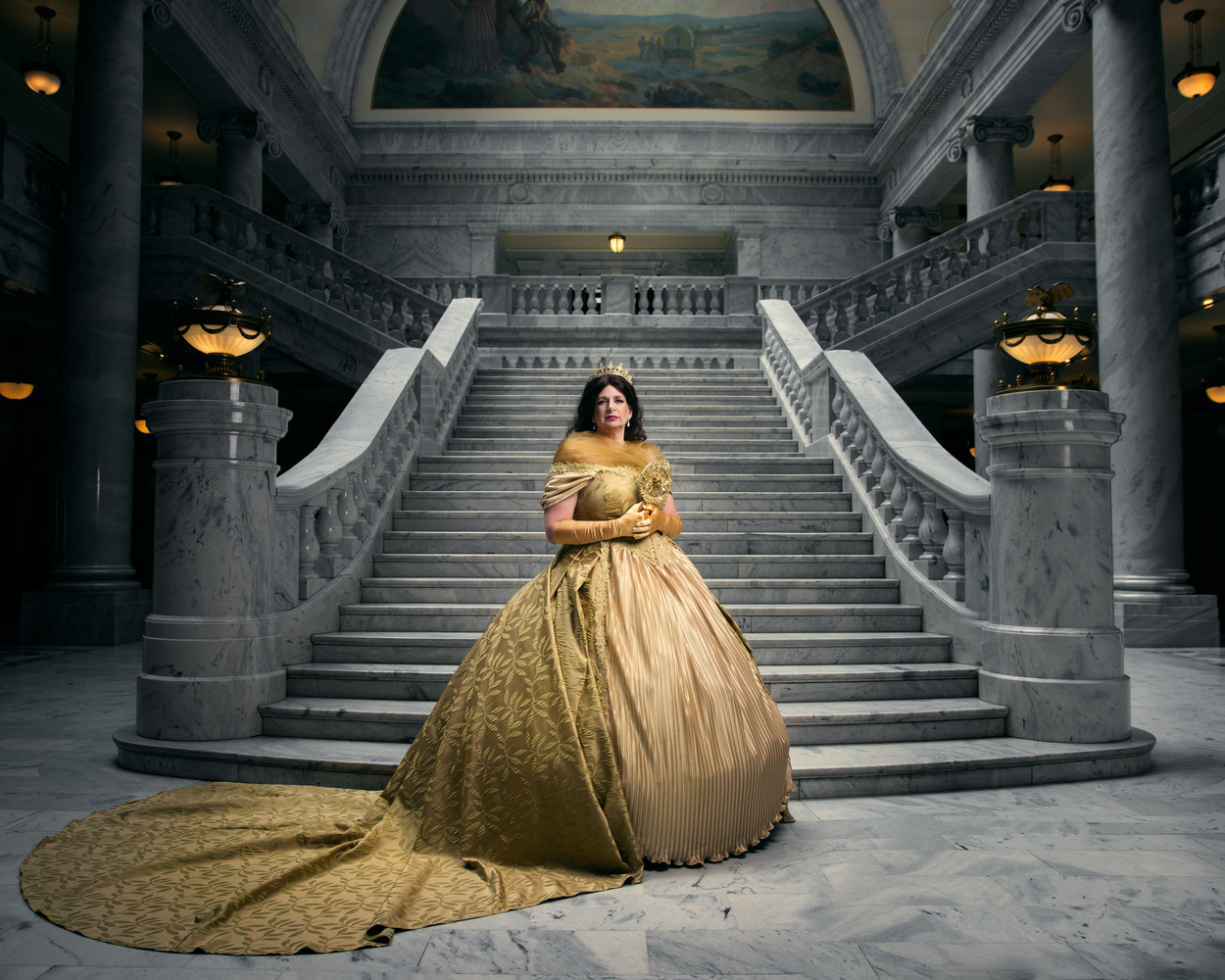 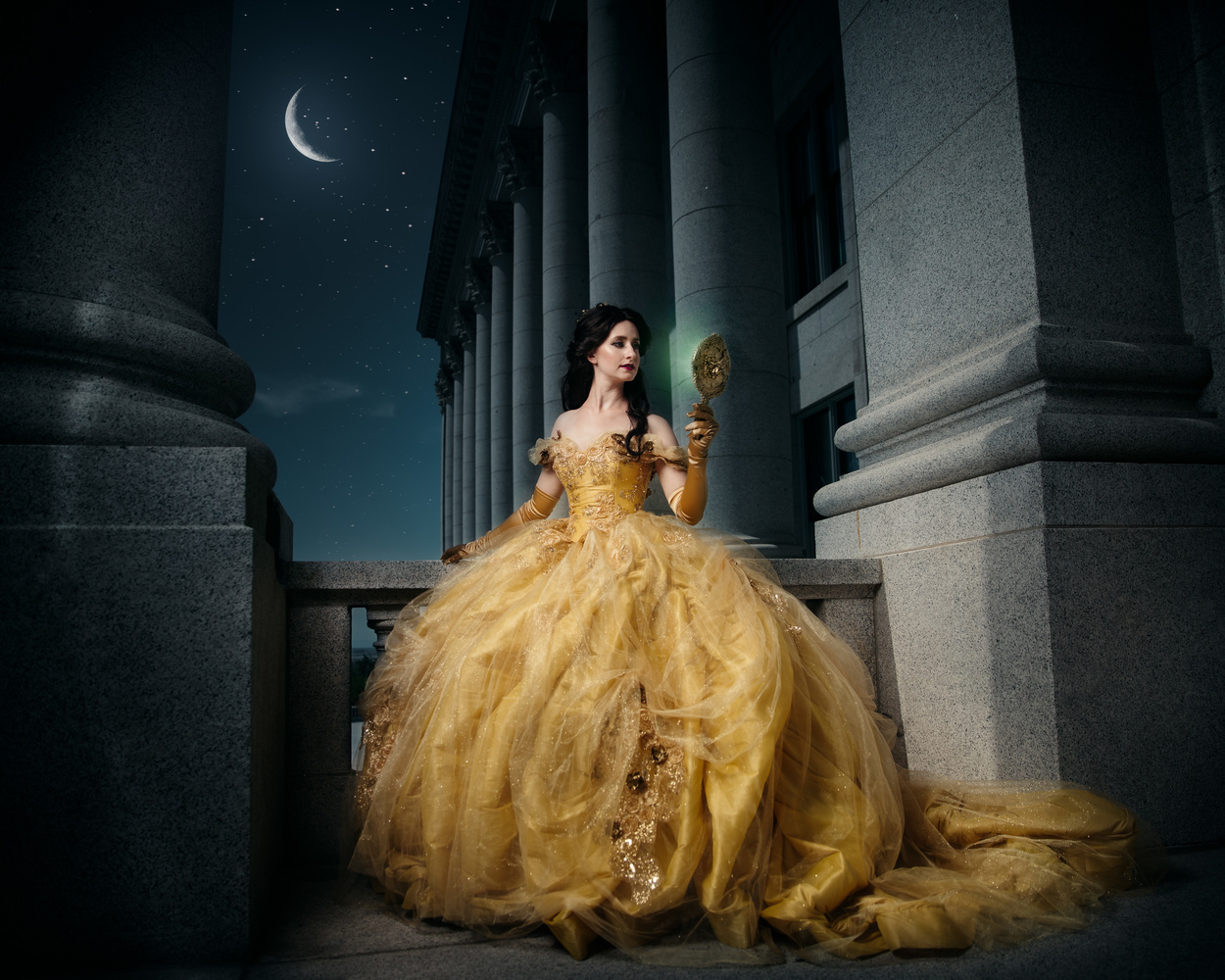 Belle from "Beauty and the Beast" (Bethanie Garcia and Linda Wadley)

Bringing to fruition such an intricate set of costumes and such a carefully planned shoot took time, with Garcia taking several weeks to design and create the pieces and the duo spending about three weeks in preproduction scheduling, location-scouting, finding models, etc. Nonetheless, the results were clearly worth it and show off just what can be accomplished with precise planning and commitment. The actual shooting took a week, beginning in Utah and traveling across two states before finishing in Westminster, California at a Buddhist temple.

Because of the varied locations, sets, costumes, and models, Ross wanted to provide a certain consistency to the images that would serve as a connecting throughline for the overall series. As such, all images were shot with a Sony a7R II and 24-70mm lens at the wide end using similar framing and lit with a Paul C. Buff AlienBee B800 with a 48-inch softbox. 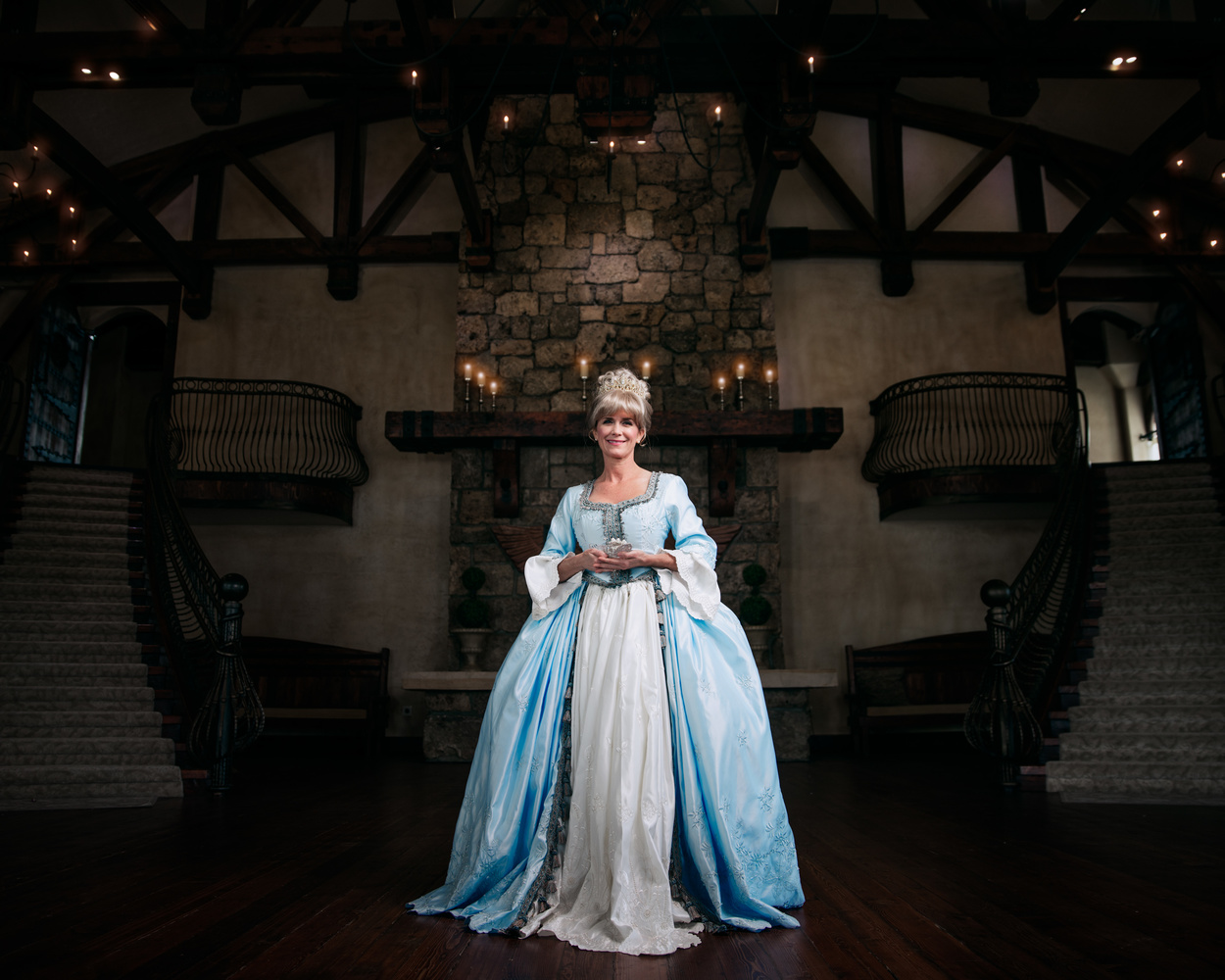 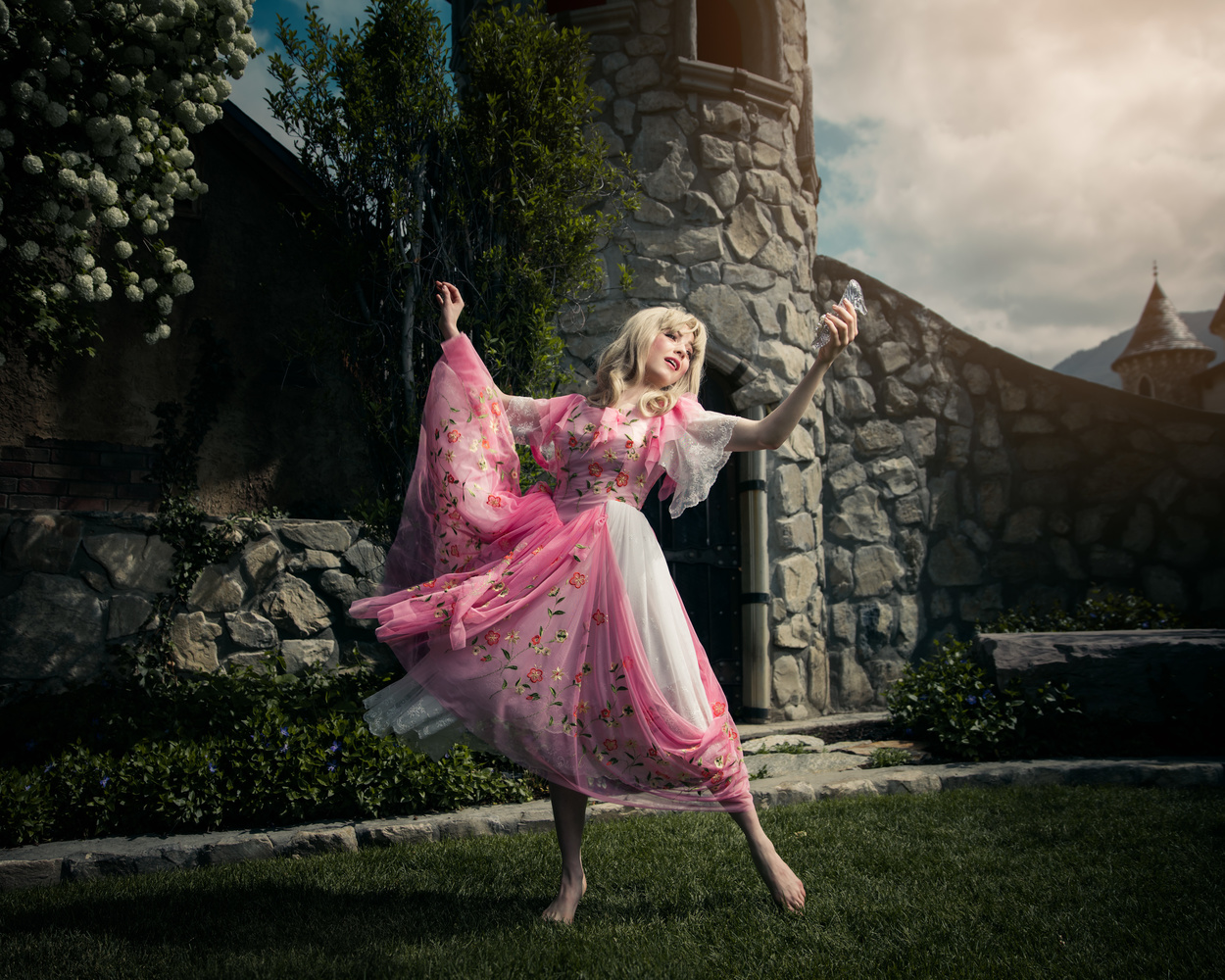 Ross notes that while his projects are normally “constant fires to put out one after the other,” this one went very smoothly despite the involved logistics, with the only hiccup being a wig that was shipped late, which simply resulted in a few of the images being shot at a later date. For him, the biggest challenge was not logistical, but rather ensuring consistency in the series while still showing the individuality of each princess, location, and movie.

Once the images were shot, Ross had some decisions to make regarding post-processing. The fanciful nature of the concept could easily lend itself to a lot of post-processing, but he decided to hold back, noting he wanted to let Garcia's costume designs and the choice of locations speak for themselves:

I tried to minimize post-production to color grading and retouching... for the purpose of keeping this as raw and unmanipulated as possible and true to character, which turned out successfully, as I was able to post-process these efficiently and consistently throughout the series. 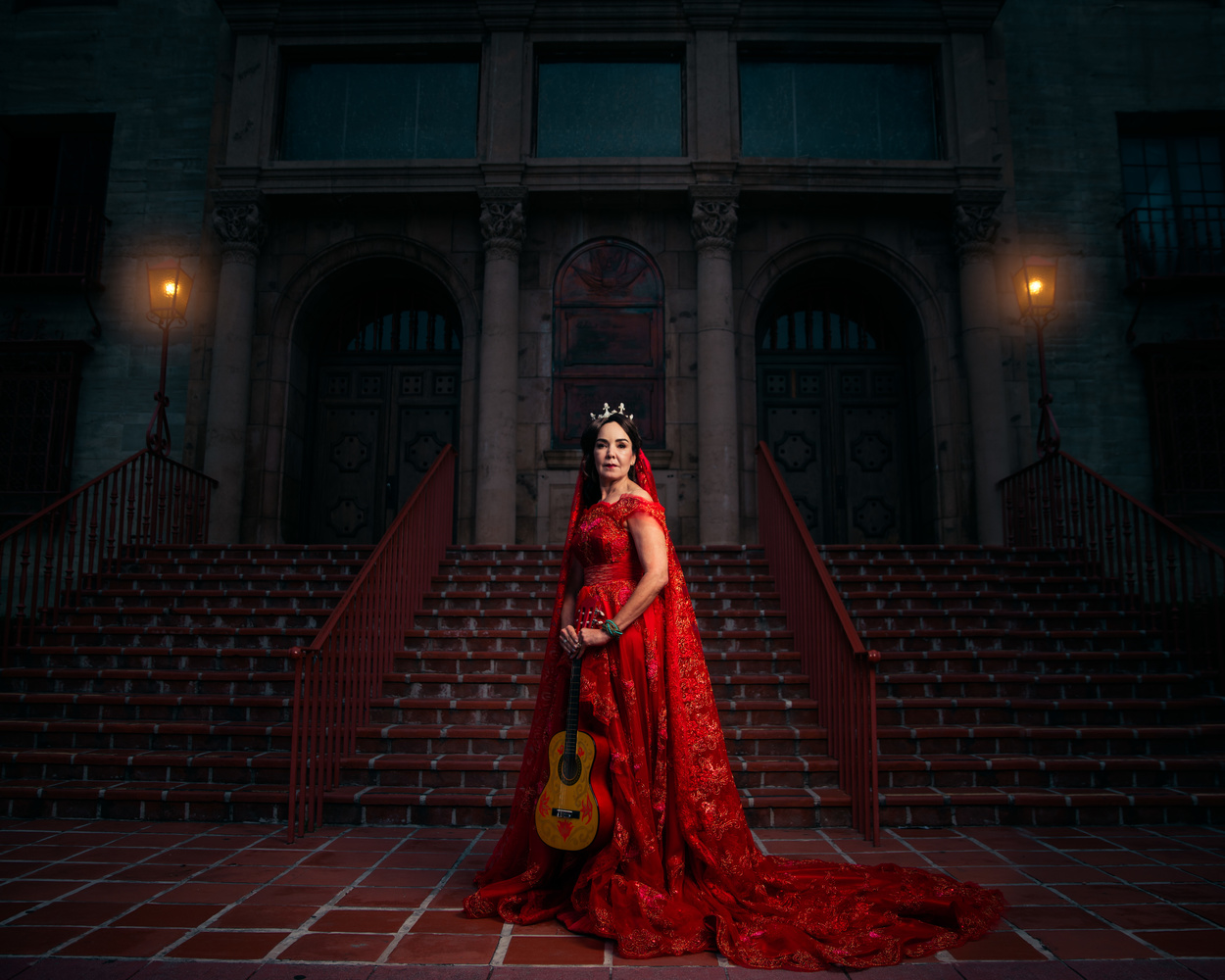 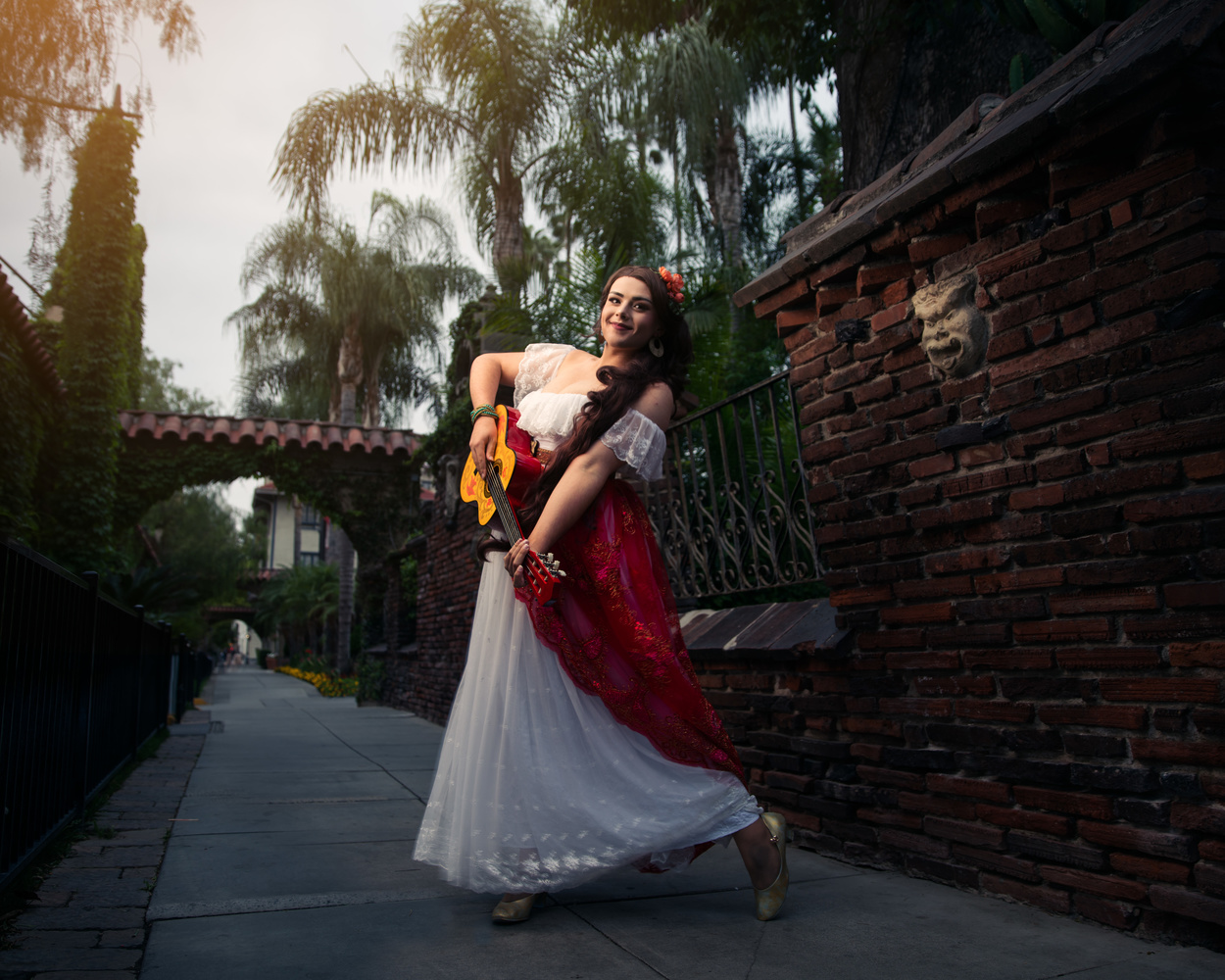 Elena from "Elena of Avalor" (Richard Schaefer and Stella Schaefer)

Though he enjoys shooting extravagant concepts and characters in general, Ross notes he still approaches each project individually, adjusting the complexity of his production and choice of equipment to match each concept and stay true to the original idea:

The main theme I stick to is to be true and believe 110 percent in the idea... [It's] key to bringing out the greatest result.

This translated to a natural curiosity and drive to continue exploring; he encourages budding photographers to never stop seeking out new concepts and shoots and to avoid settling into a routine, both technically and artistically. In particular, he recommends shooting as many different genres and subjects as possible. 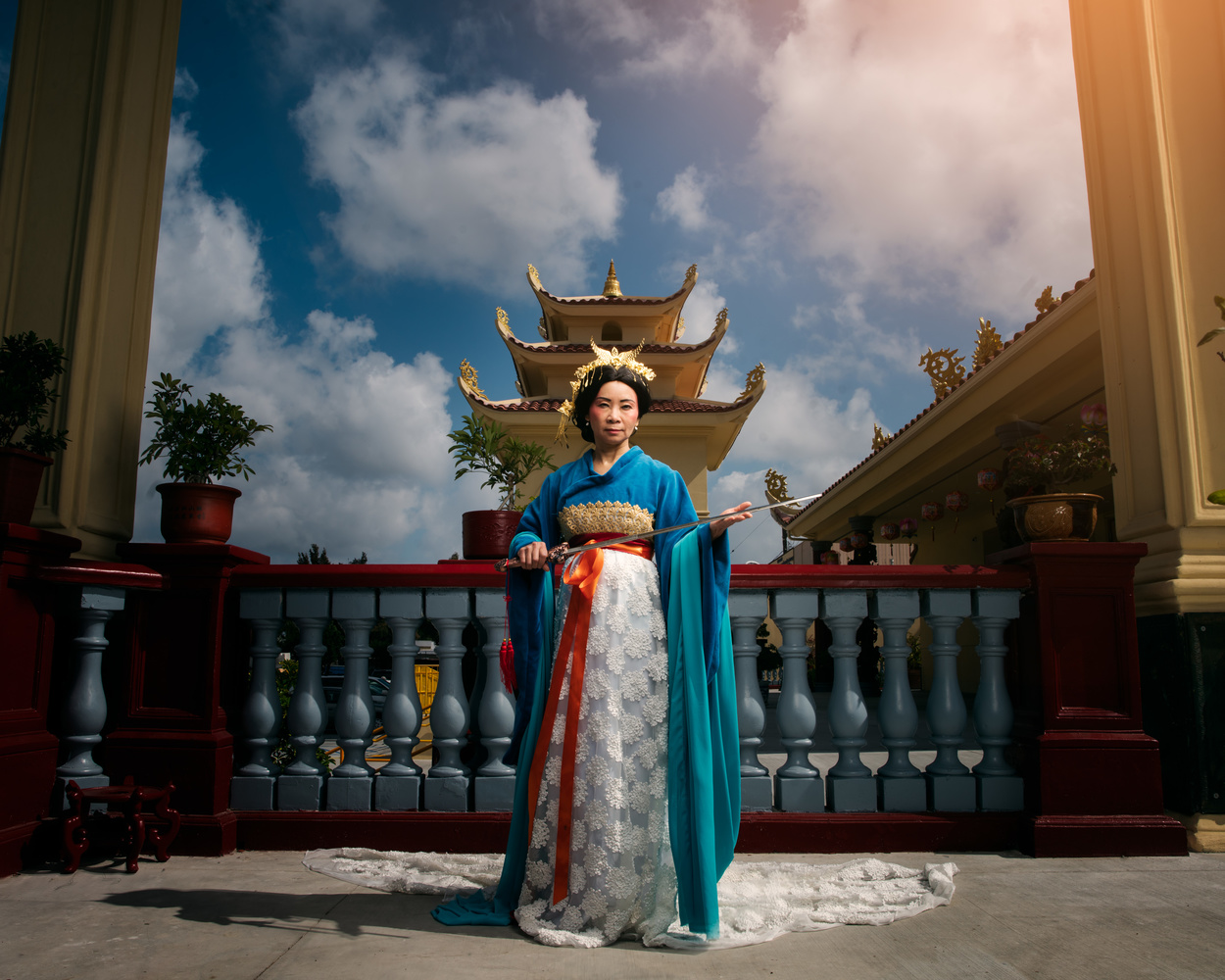 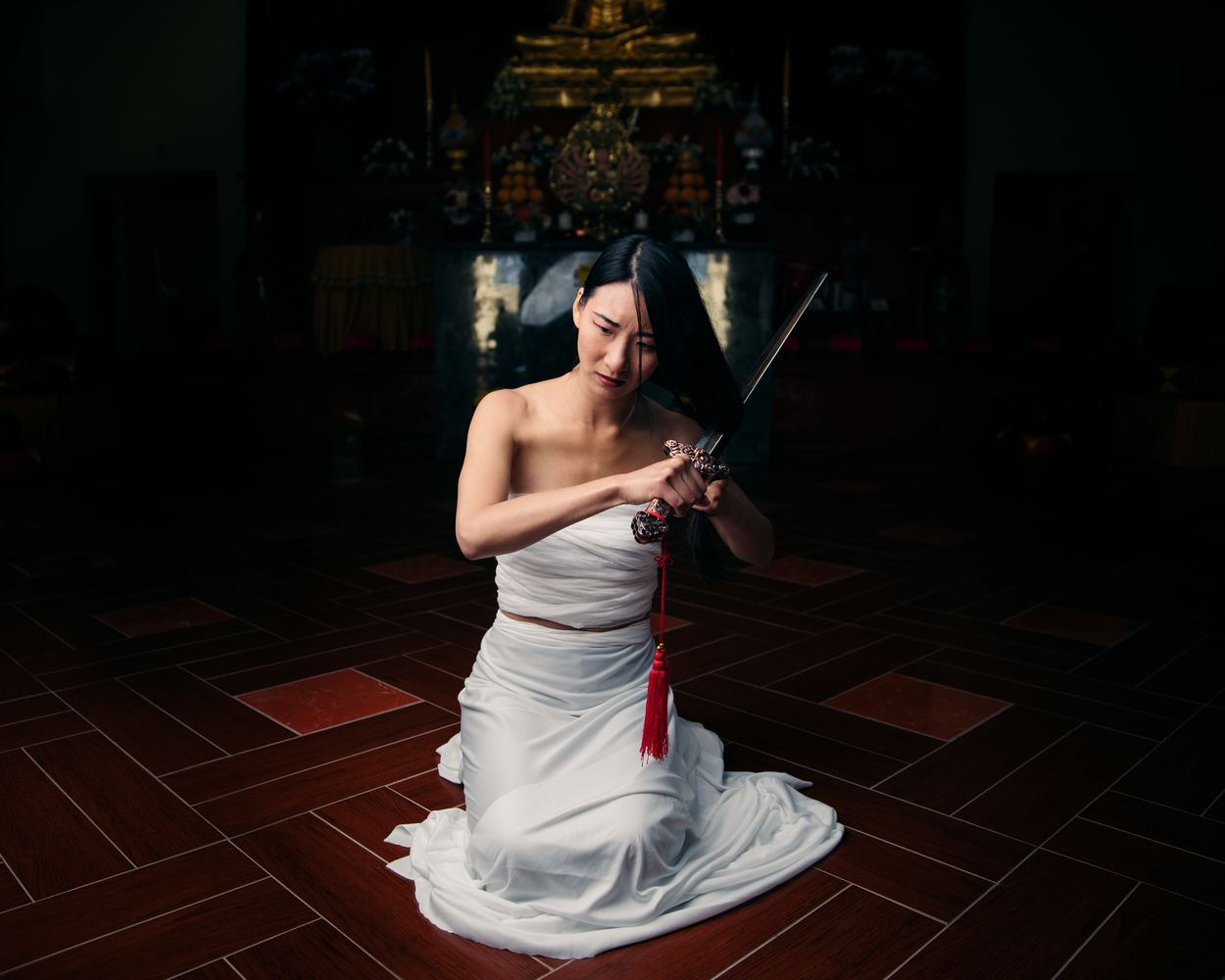 Ross' eyes are constantly turning toward bigger and more elaborate shoots. He says his dream is to tour the world, shooting "fantastical and eccentric characters and extravagant pieces" in unique locations. His commitment to being uncompromising in bringing his concepts to fruition is evident in both his attention to detail and his willingness to travel far and wide to find suitable locations. 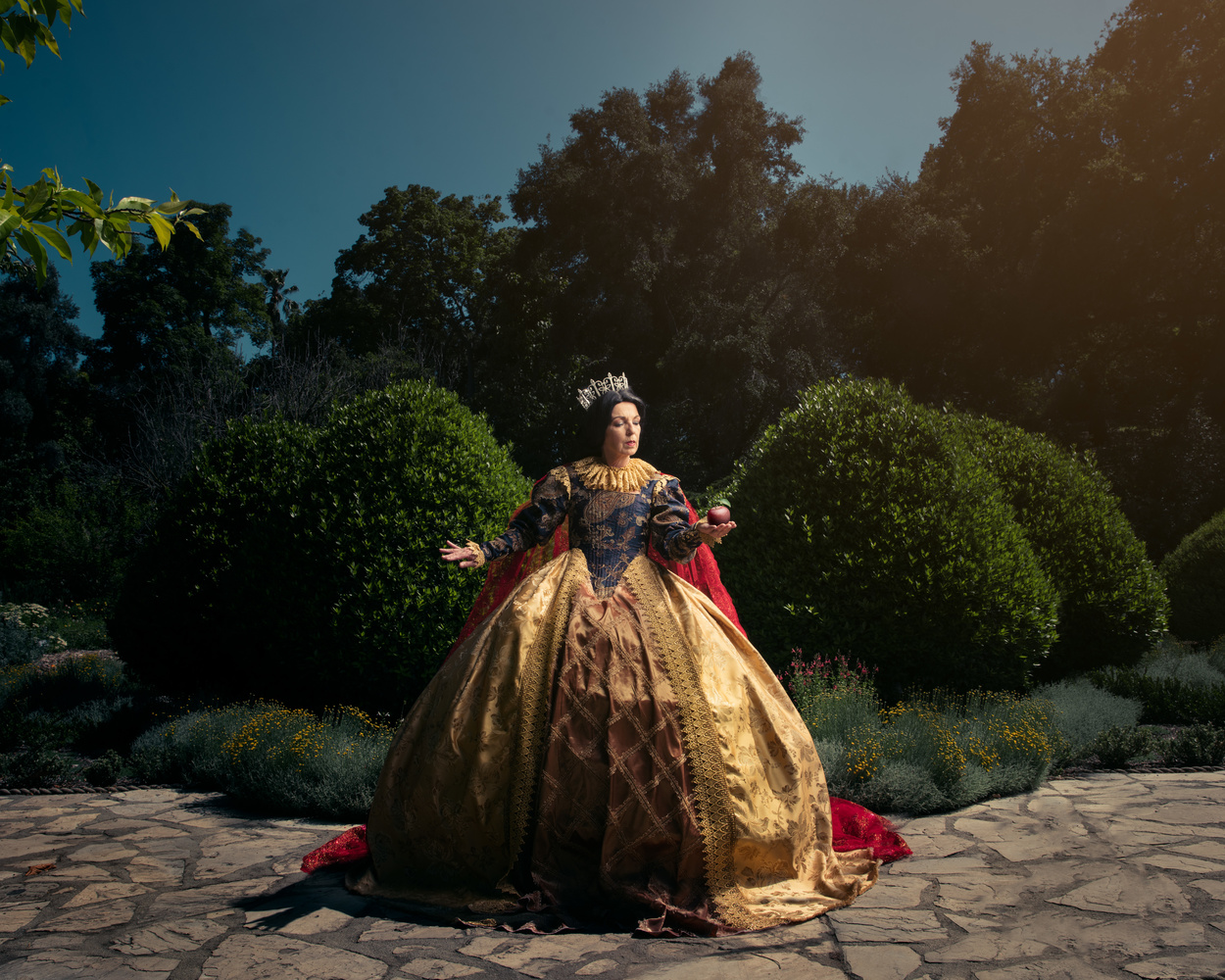 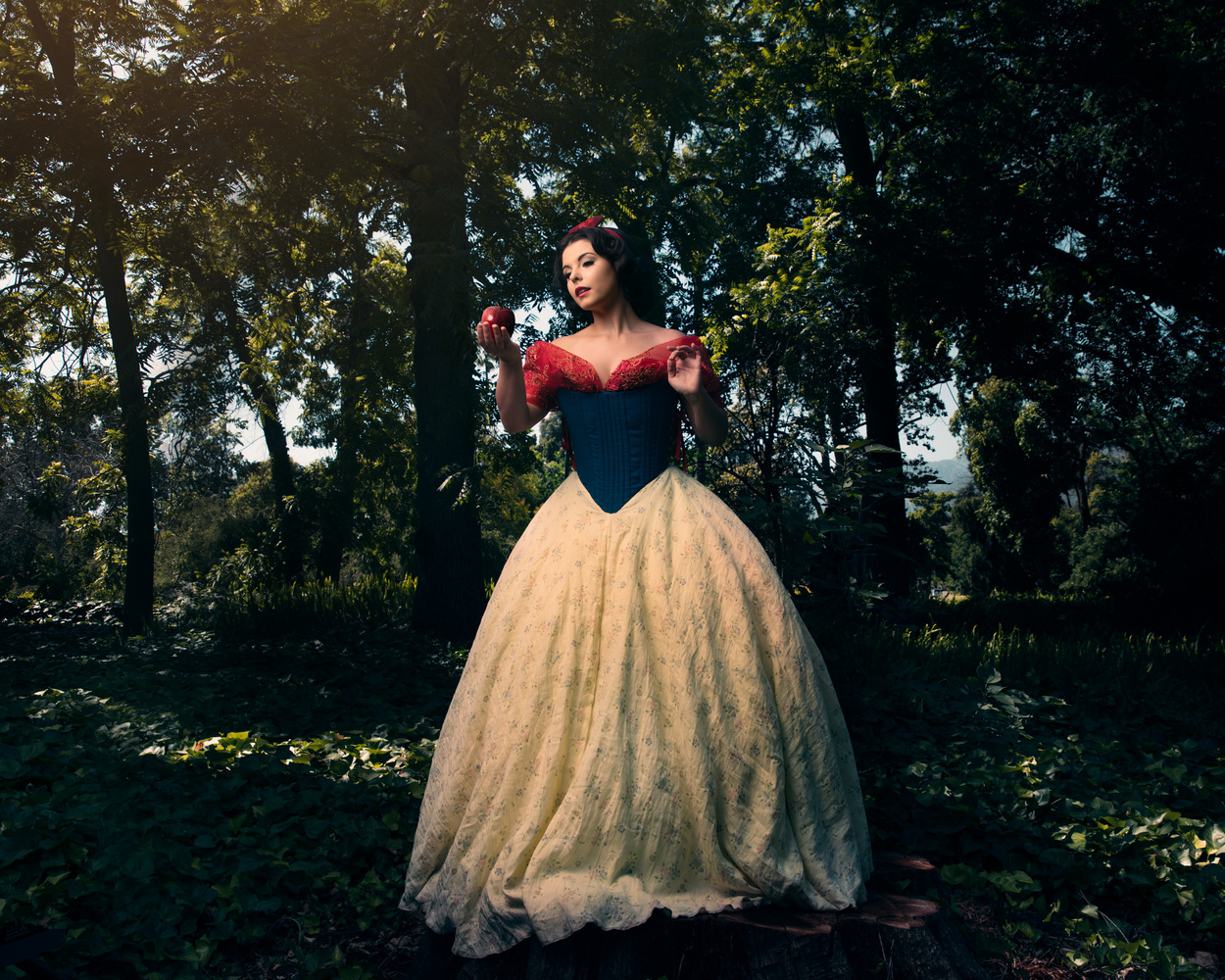 Altogether, I really admired not only the unique concept and its wonderful execution, but also the inclusion of daughters and their mothers and mother-in-laws, and I think the project really did the Disney theme justice.

Impressed by the tenacity to pull something like this together

As the Guinness men used to say, "Brilliant!"

What about Frost? And all the guys? Next project perhaps? Well executed!

Great concept. Great execution. Really like the rollover way to see the images too. No small task start to finish.

And now all of the princesses are trying to figure out how not to become queens.