Over the years, many companies, from Lytro to Light, have tried to come up with small, funky cameras that use technology to pack DSLR punch into a small package. Invariably, all of these have more or less failed, but there’s one company that’s just sitting on a sleeping giant in this market: Apple.

While it’s true that Apple’s last foray into dedicated cameras, the Quicktake series in the ‘90s, didn’t set the world on fire. The early models looked like a projector and a set of binoculars had a baby, and all topped out at 640x480 resolution. But if the failed experiments by Lytro and the not quite world-beating Light L16 are any indication, someone, somewhere wants a camera that’s phone-sized, but significantly better than a phone.

Enter the iPod. Yes, it seems like the neglected child of Apple’s lineup. It has a lame camera and iPhone 7-ish internals. It has none of the trick photo modes that newer phones do, such as portrait mode or special lighting modes for night a la Google’s Pixel, even after a refresh a month ago.

But, it does have the guts and the software to get the job done, if just paired with the right camera, and there’s the rub: Does Apple even want to create something special like an iCamera?

It’s already a lost cause to get people to carry DSLRs today. The big cameras don’t connect easily to the Internet and getting a photo off and processed is difficult. Cameras like the original Lytro light-field camera and Light’s L16 try to use creative optics and processing to create DSLR-quality photos that can be refocused after the fact, but were dogged by a few issues. In Lytro’s case low resolution (1.2 megapixels in 2012, though the ill-fated Illum followup could hit 4) was a big issue, and so was the software which forced users to the cloud to process any photos. The Light L16 solved the resolution problem, but has a DSLR price tag and you still need desktop software to get the most out of its photos. 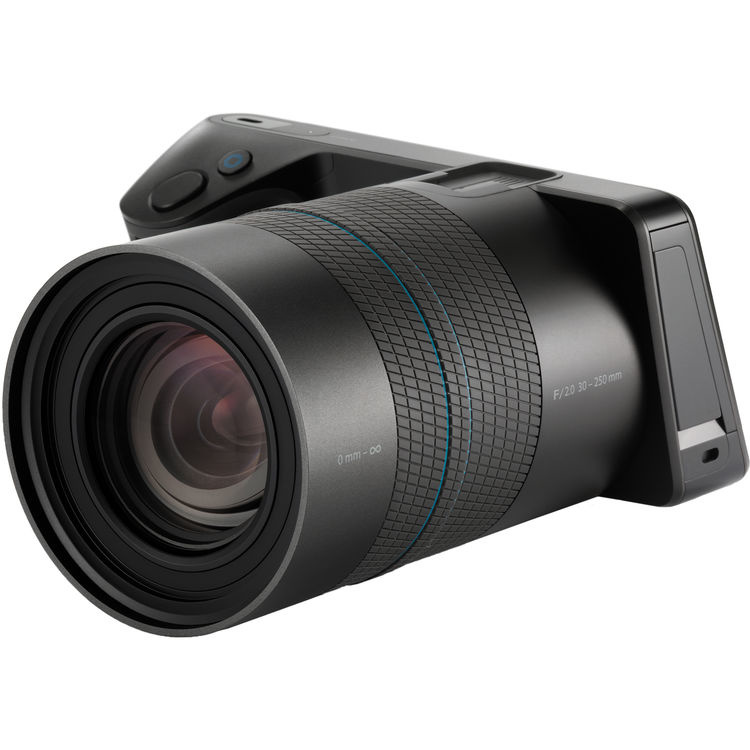 By the time Lytro followed up its light-field camera with the Illum, it was too little, too late. The company no longer exists.

This is where Apple can (and should step in). They already have a great form factor that has great software (Look, Canon’s menus are great and easy to use, but can you load a photo onto Twitter directly from a 5D Mark IV?). The app ecosystem allows for even better cameras if you want, or the simple included one if you don’t. Everyone already knows how to use it.

What It Would Need

This is where Apple can beat the big camera companies at their own game. Apple, Google, Samsung, and other smartphone companies are way ahead of traditional camera manufacturers when it comes to computational imaging — smart software and technologies that allow a pocket-sized iPhone to produce DSLR-like images. Couple that with optics that give you some zoom and wide-angle capability, maybe even a macro (not unlike this device) and you’d have something that would be a force to be reckoned with. Heck, maybe even a one-inch sensor to seal the deal. If Ricoh can cram two one-inch sensors into a Theta Z1 360 camera, surely it can be done with an iPod-turned-camera.

Then you’d truly have a pocket camera that’s ready to take on the real cameras, after all of the false starts by other unknown companies in the past.

At the very least, it would make me buy an iPod again, so I can at least listen to music as I take pictures on the same device.

Would You Get It?

What do you think? Is this a crazy idea, or something you’d actually buy? How much would you pay for it?

I’d 100% replace my causal point and shoot with it.

I think I get where you're going with it...but I'm not 100% sure I would replace my SLR with it. I agree with K. Lopez about using it for a point and shoot, maybe on vacation or where I wasn't concerned with the artistic quality of the image.

But then again, isn't that what your phone is for? Why would you purchase a dedicated device that will probably not be much more capable than a phone due to similar form factor issues?

Absolutely a solid idea. I would love a camera with an iOS like experience with even a 1" sensor in it. It would easily be my everyday carry camera, possibly as a second camera for documenting sessions or creating Youtube videos. Think a G7X but with a smoother interface and direct Instagram or Flickr upload.

I know Samsung made smartphone/camera hybrids, but honestly Apple would probably implement it significantly better.

How much would you be willing to pay for such a device?

"I know Samsung made smartphone/camera hybrids, but honestly Apple would probably implement it significantly better."
That's a rather bold assumption.

I'd pay probably ~$1K for it. If I could get ease of use equal to my iPhone or iPad in a camera, I can definitely see myself paying that. Removing technical barriers for my everyday shooting while still putting out better quality than my iPhone; that's something worth buying.

I know that in most of Apple's products they prioritize user experience. That's the one thing they do correctly almost every time. Take the concept of those Samsung Galaxy cameras, put it in a slimmer aluminum body and some camera-oriented form of iOS, hopefully with a 1" sensor. Throw in a solid lens and you have an actually legitimate ILC killer.

Also with full integration into the Apple eco-system, being able to use Airdrop would be a major feature. Or even having the ability to link it wirelessly to use other Apple devices as monitoring solutions. I think it would be much better than the old Galaxy cams.

I think the sweet spot would have to be around what people would pay for an iPad or something, like $299. At the current price of $199, that gives the iPod some wiggle room to gain some new optics, I think.

And I agree with you, as a user of a Samsung Galaxy tablet (I bought one to run my 360 cameras which often only have Android apps) and an iPad, yes, Apple's implementations are often significantly better, at least to me.

I'd just use an updated iPod as camera remote, Syrp remote, drone screen, etc, etc.
Annoying when people call when you're in the middle of a SnapBridge controlled stop motion capture.

Of course, I could just use the iPad for that stuff, it's just handy to use the phone at times.

By this time next year someone will have made a phone with all that crammed in, so meh? There's already DSLR apps, Adobe apps, 8 million clip on lenses. Don't really see the point of this.

The quality of photos in phones, every increase in the marketplace, will shrink the photographers market share. The democratization of camera phones and technology is growing. Nikon and Canon fast losing market share to this disruptive technology. Sales are way down, these Titans of Camera Companies. The industry will clean itself and re-invent themselves. But unless you are a top tier Photographer, the rank and file of the photographer will shrink dramatically in the next few years. For me at age 73 is not an issue of loss. I am a good photographer but not top tier. It is a good 2nd income but I have carved out a small piece of the pie. If was in my 20's or 30's I would avoid this industry and get secure in other ways. Then venture back in slowly. The shakeout is coming and is here now. Its the curse of obsolescence. My rant for the day

I don't know, digital has brought a lot of people to photography. I think the industry has grown tremendously from the trend, only now it's just fading off and dslrs sales are just returning to a real market. Camera improvements on phones are just a way to increase sales price in my opinion. I don't see people going to purchase an iPod camera at a time when people keep their phone longer and longer and only feel forced to get a new one when the battery starts slowing down.

I can see your thoughts , well said

I dont see why I would want to carry this, along with my phone, when a phone will do the same job...?

Being a disabled photographer and using 1 hand small defiantly suits me. I would 100% take advantage if they came out with a good camera