The Nikon D850 is quite the beast of a camera. It holds a massive 45.7-megapixel full-frame sensor that can record 4k video and create 8k time-lapses. It can shoot at a blazing fast seven frames per second and has an enormous 51 image buffer when shooting 14-bit raw images. The focus speed is insanely fast, deadly accurate, and offers 153 focus points with 130% more frame coverage than the older Nikon D810. The only problem with such an amazing monster of a camera is that Nikon thinks it’s too much for women to handle.

I know what you are thinking. No way Nikon would ever make such a claim. It seems absurd that only men could handle the D850. I myself can think of a large number of women photographers that would be more than capable of producing spectacular images with any camera, let alone this camera. But when Nikon created a team of 32 professional photographers to be the faces of the Nikon D850, they didn't choose a single woman photographer. 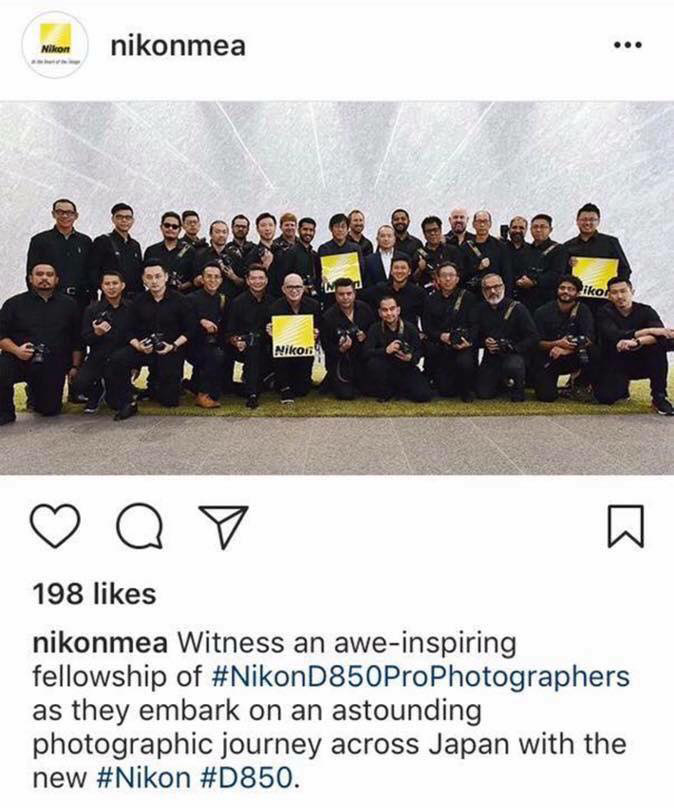 When building a list of 32 photographers, you basically have to go out of your way to not include a single woman. The problem here though is not just with Nikon, but instead with the entire photo industry. Brand ambassadors are filled with mostly men and entire conferences are filled with only male speakers. It would seem that the majority of photographers are men or maybe it's just too hard to find a woman that's not busy cooking and cleaning.

Or is it feasible that the D850 is in fact for men only and Nikon plans to release a pink and sparkly D850w for women to use?

Now... that´s a surprising uppercut to Nikon. My wife is getting one D850 (www.gyda.is). She will show them...

Surprising? No, business as usual.

She surely is a great shooter. Thanks for sharing!

Thank you for the link to her work! Love the portfolio. And now I want to visit Iceland!

" She will show them..."
Show what? Is Nikon preventing women from shooting with a Nikon?
Did anybody find out why Asian women isn't on this panel? Did they decline the invitation?
Are the asian population racists in nature?
Yes, no?

I bet someone at Nikon is kicking themself right now. Youch.

at this point, it seems pretty purposeful. There are many MANY times where the issue of shutting down women in this industry has been brought up. There are no more excuses for this behavior.

@Katrina, fortunately, there are others out there making a real effort at trying to address the imbalance, for instance https://www.womenphotograph.com/

"There are many MANY times where the issue of shutting down women in this industry has been brought up."
How is this shutting women out? Just because there aren't women? How do we know that women contacted did not decline?
There are way more men in the industry. A games developer had ONLY women on it's payroll. NO ONE complains about it.
There was an article on buzzfeed reporting on a women only company...zero women of colour, zero disabled women.

But if it were males to run the company...
Oh the hypocrisy.

Also, if someone stops you from a buying NIkon because you have a vagina, THEN only will I believe you.

Did anybody find out why Nikon do not have women on board the Asian ambassadors?
Yes, no? Just jumping to conclusions I see.

What do you mean shutting down women? A lot of women are working as photographers and, more often than not, hold little to no prior experience other than some modeling work. Women are the only ones that can buy a DSLr and become a professional (paid) photographer in a year or so despite shooting nothing but mediocrity. Corissa Furr and Miki Taka are a couple of examples.

Also, why does it need to be equal though? No one complains that women make up the majority of brand ambassadors and product specialists at trade shows. Hell, they are no longer called models and instead given the UNEARNED title of marketing specialist and the like and dress normally so gender shouldn't matter at that point and yet it does. Look at the hashtags, doesn't seem to garner any attention now does it?

Have you seen other brands' representation of women in photography roles? They are actually worse than Nikon. If we are going to have a conversation about this topic as it concerns the industry then should other brands not also be called out in the article?

Then look at the racial distribution too, how many photographers of color do you see ?

"how many photographers of color do you see ?" Zero, and you?

""how many photographers of color do you see ?" Zero, and you?"
Non-whites? There are more non-whites than whites...

So Veterans are a racial category now? This is the typical dumb argument presented by the privileged few SMH

It's not a surprise (especially to us women) that it's ALL over the industry. We already knew that. Doesn't excuse Nikon either.

Nope. Everyone at Nikon is thanking themselves for all the free publicity you "fake outrage" people are giving them. Sales won't drop from this, the discussions won't effect anything, and Nikon will keep doing their thing.

This article is complete BS. Dixie Dixon is a Nikon Ambassador and has been heavily involved in the D850 marketing campaign. Also, every round-table panel discussion I have seen Nikon host has had at least one woman on it.

One woman? Is her name "Token Woman" by any chance? (http://southpark.wikia.com/wiki/Token_Black) It is unfortunate that photography is dominated by male photographers, but even still 32 photographers and not even one woman.

Of the two official roundtable panels I saw, one was with Joe McNally and Dixie Dixon. And the other panel was with Andrew Hancock, Brittany Leigh, and Matthew Jordan Smith. The official list of Nikon Ambassadors for the United states is very diverse. The particular campaign referenced in this article was for the Asia market. So maybe a more valid discussion is why Nikon does less to advertise larger sized camera's to Asian females. It's probably because they secretly hate all women, but it might also be that they have stats in the Asian market that show that they just don't sell as well to that market.

But that one single reason can never ever be sexism because I'm Ben Deckert and I find such an idea offensive.

Here are my problems with this "article":

"The only problem with such an amazing monster of a camera is that Nikon thinks it’s too much for women to handle."

"Or is it feasible that the D850 is in fact for men only and Nikon plans to release a pink and sparkly D850w for women to use?"

Everyone who lives in the United States and has been watching the coverage knows that women have been involved in testing and promoting the new camera. That makes both of these statements about as close to slander as you can get.

I know I don't represent a very large market area, but in Fort Worth Texas where I live Nikon sent only one pro photographer to their hands-on demo event at Fort Worth Camera for the D850. That was Dixie Dixon. Am I to think that Nikon USA doesn't think that there are any pro male photographers who can handle the D850 because they only sent a woman?

The problem with the article is not the idea that women are under represented in the photo industry. The problem is the factual lies and hyperbole.

There are 24 nikon ambassadors in the us, of which Dixie Dixon is one. There are 7 women total. So, yes, it is great that the ambassadors of both genders have access to test out the cameras. If this were a unique event (no women on a testing panel of 32 photographers or fewer than 1/3 of ambassadors are women) then sure, it would be an anomaly. However, it happens at all levels - every conference, every ambassador program, ever testing panel. The specific pull quotes might be hyperbole, but there is a frustration that is not hyperbole.

No arguments with you there. But I don't think that makes it okay for a site like this to allow falsehoods and slander.

Well, the first quote is just an analysis of the marketing job Nikon is doing - its not false or slander, just making an educated guess (Nikon isn't thinking about women with this camera) by looking at actual data (they didn't have any women out of 32). The second quote is seems to be a tweet from someone else, which is clearly hyperbole and meant to incite, but doesn't seem to fall anywhere close to slander since Nikon actually does make a variety of their cameras in pink.

"they didn't have any women out of 32"
https://goo.gl/npoFwC
There is one,

Did anybody find out why Nikon do not have women on board the Asian ambassadors?
Yes, no?

Or do we jump to conclusions?

so you need exact numbers so you can then decided for yourself if there is sexism in this industry rather than listen to the countless women telling you that there is?

I already stated my issues with this article...they relate to these two sentences which are factually not true. I understand the bigger issues, but that doesn't make it okay to publish false information.

"The only problem with such an amazing monster of a camera is that Nikon thinks it’s too much for women to handle."

"Or is it feasible that the D850 is in fact for men only and Nikon plans to release a pink and sparkly D850w for women to use?"