The Secret to Making Eyes More Attractive, Backed by Science

Our biological instincts are so hard-wired when it comes to the perception of attractiveness that we're actually quite predictable in our choices, even if we can't explain the reasons behind them. Thankfully, science has delved into these unconscious tendencies, and its findings can really help give our portraits extra sex appeal.

The eyes may very well be the window to the soul, but not all windows are built equally. On the surface, eyes look reasonably similar in their construction, and even when faced with several pairs (not on the same face!), you will probably struggle to see any differences beyond the obvious variances in color.

What is interesting is that on a much deeper, subconscious level, in a fraction of a second, your brain has already made up its mind about which pair of eyes is most attractive. Scientific studies have shown that one component of the eye in particular does greatly influence facial attractiveness, and the part in question is called the limbal ring. 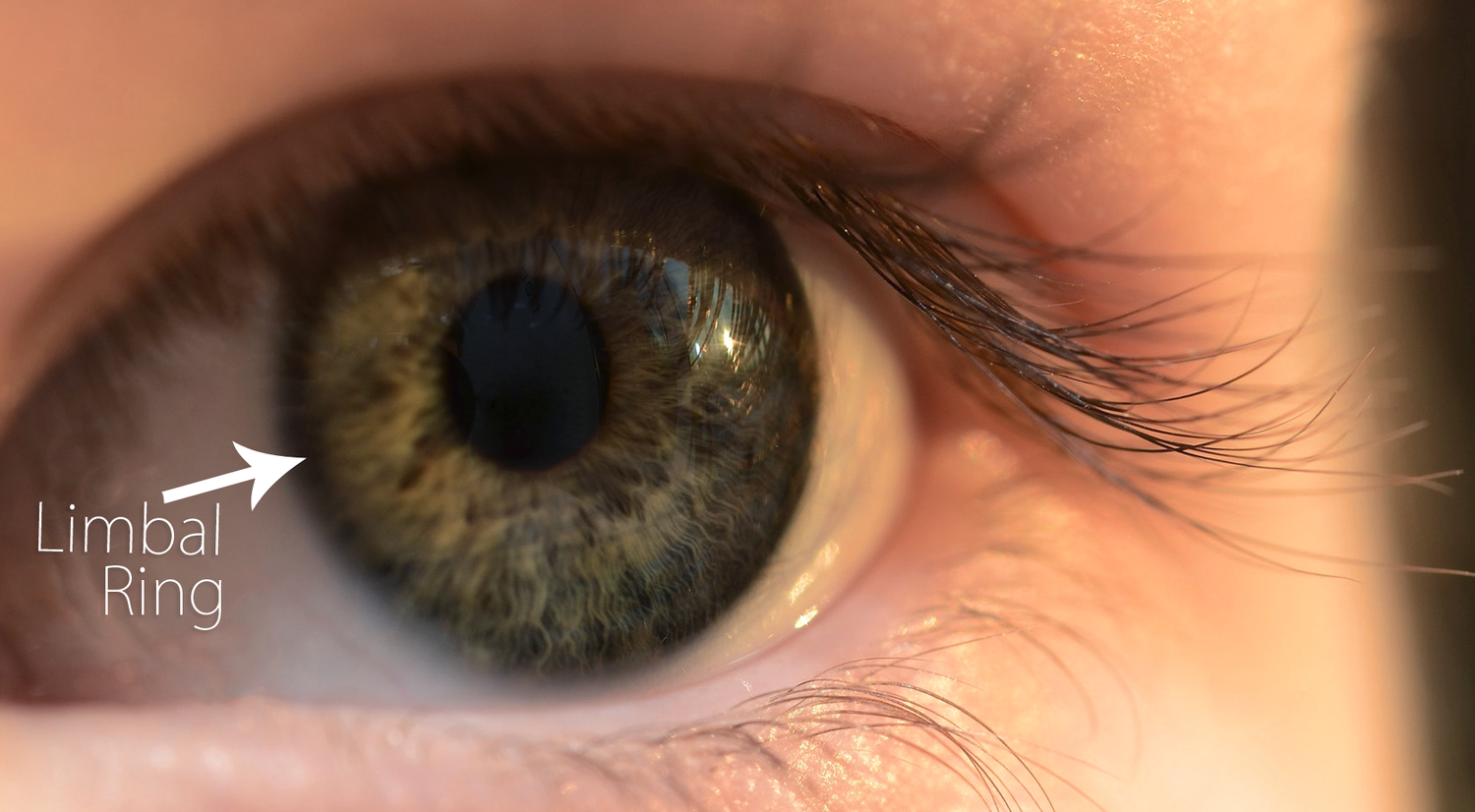 The limbal ring is a black line that separates the iris (colored part) from the sclera (the white portion of the eye). In the context of attractiveness, both thickness and clarity of this black line play equal parts in how highly someone is perceived.

With age, the limbal ring becomes less prominent, making it a probabilistic indicator of youth and health, and so it's these signs that our caveman instincts are latching onto. Like many of these unconscious cues, it's all about working out who could be the best possible candidate to produce offspring with.

The scientific study found that for both male and female observers, both male and female faces with a dark and more apparent limbal ring were rated as more attractive than otherwise identical faces with no limbal ring. This fact is actually really important to know, as the preference for darker limbal rings seems to be a universal predisposition. This means we can use these findings to our advantage when creating portraits, regardless of the sex of our subjects or the people who will be the intended viewers of our work.

So now that we have the science lesson out of the way, how can we use this in our photography? If you have read this far, I'm sure you can now see (excuse the pun) how powerful such a minor change to a person's appearance can be. In this incredibly competitive visual world we live in, anything that can give our images an edge even at an unconscious level is something well worth taking advantage of.

We only really have two routes we can go down when trying to recreate this desirable feature. For those who would rather capture this effect in-camera, you can actually buy eye enhancing contact lenses, which will give the wearer the thick black edge you are looking for. Although this option is by far the easiest, I do think it's a lot to ask someone to stick a foreign object into their eye, especially when it's something you bought off some random website. For this reason, I would rather go down the other route we have available to us, which is to create the look of a thicker limbal ring in post production.

How to Add Limbal Rings in Photoshop

The beauty of Photoshop is there are usually several different ways you can get to the same outcome in your images. To add limbal rings, you could consider doing them free-hand with the burn tool or perhaps with the "Border" function after selecting the iris area. After testing various ways to do this, I actually think the best results come from taking advantage of "Inner Shadow," which is a feature that lives in layer styles.

First, make sure you have the "Elliptical Marquee Tool" selected. From there, draw a circle around just the iris part of the eye(s). You do need to be reasonably accurate with your selection, so do your best to get just the colored part of the eye. Here's a quick tip to help with this: while you are dragging the elliptical tool out, you can press down on the spacebar at anytime, which allows you to move your selection if you haven't quite got it where you need it to be, but if you're happy with the shape you have made. 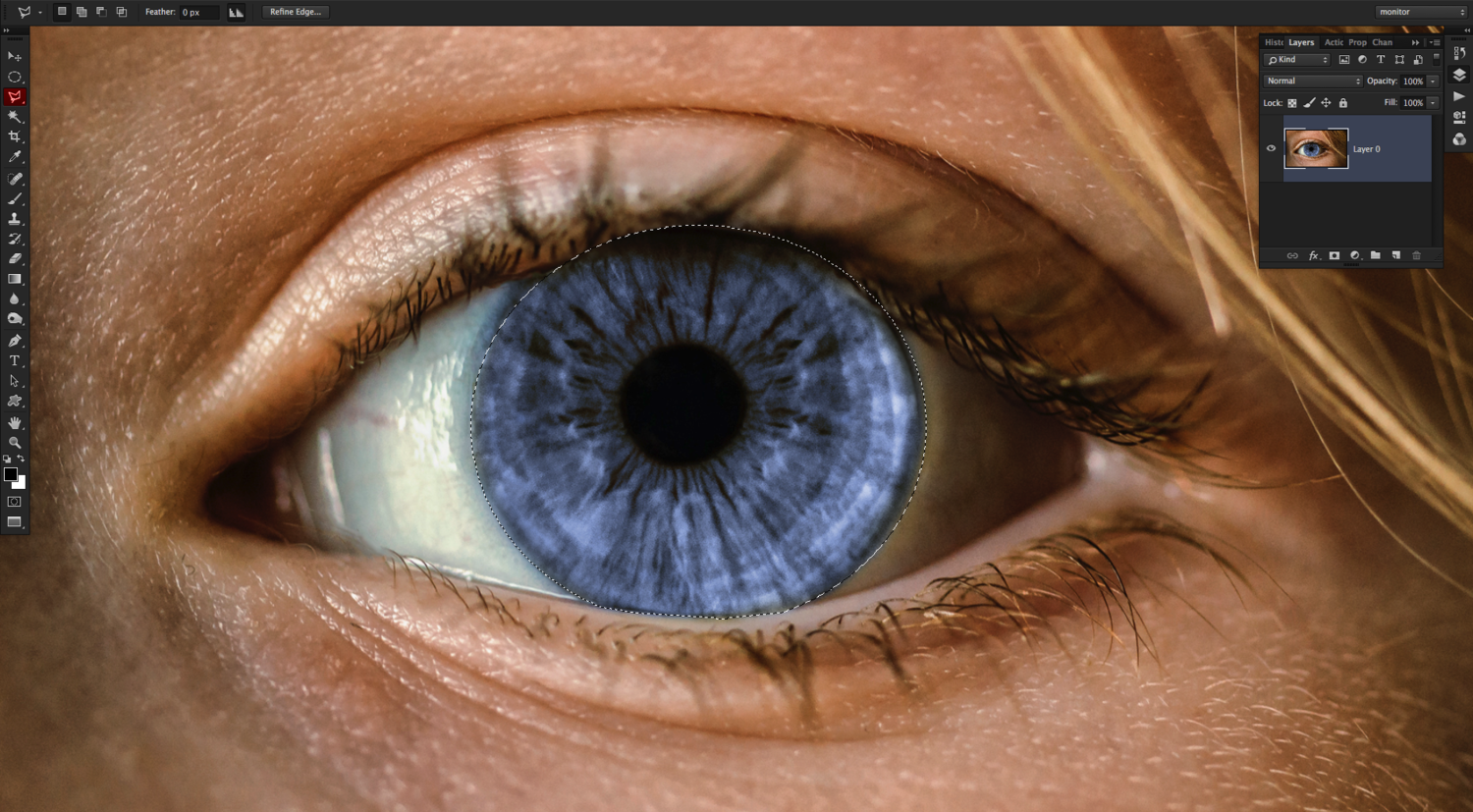 Next, you need to feather the selection you have just made by going to Select > Modify > Feather. All images are going to be different, so you'll have to play with the amount of feather radius you need. The objective is to lose the hard edge the selection tool has made, so a little trial and error may be needed to achieve the look you're after. 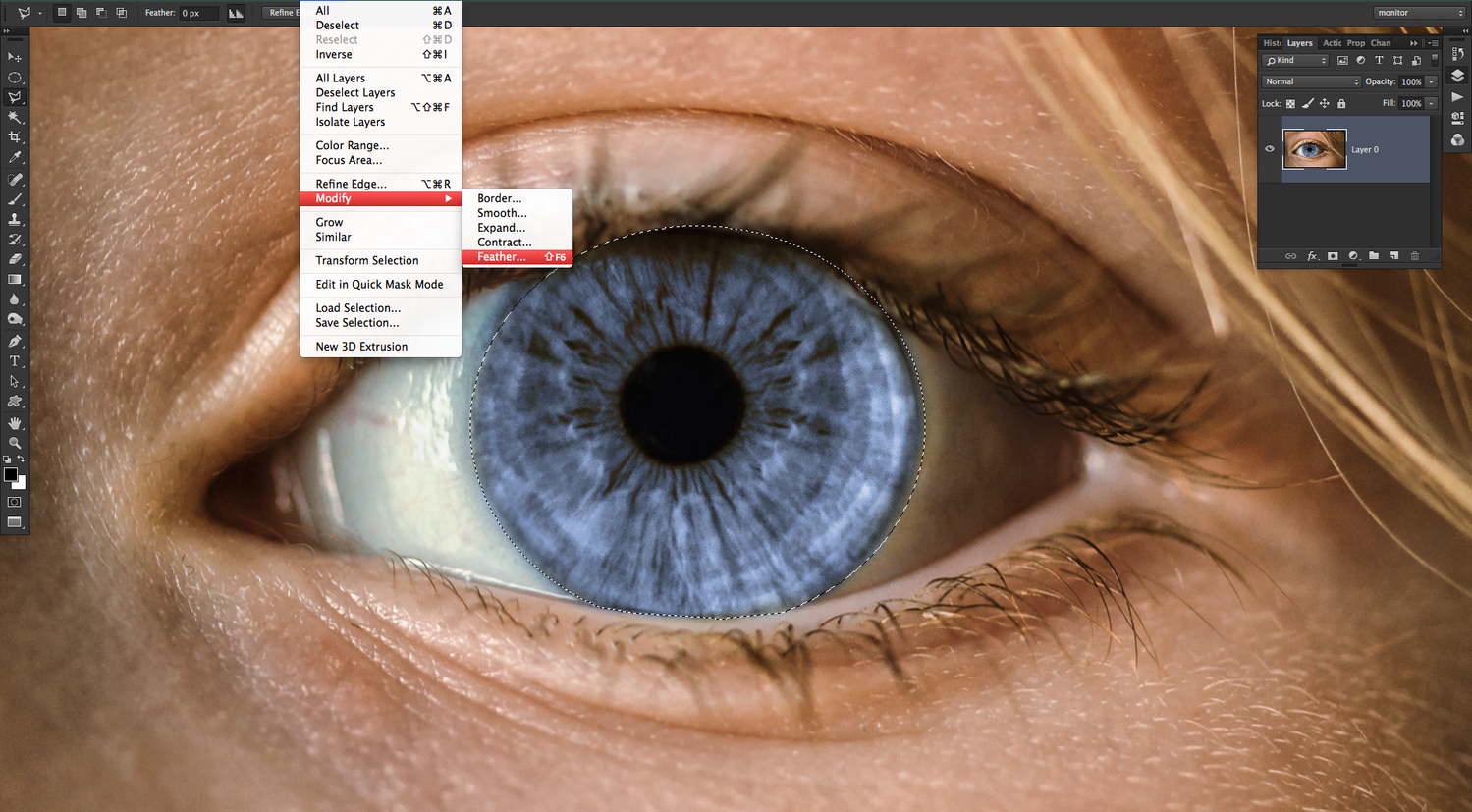 Once you're happy with your feathered selection it's time to duplicate its contents. Right-click inside your selection and choose "Layer Via Copy" from the menu. This will put a new layer above the original image in the layers panel. 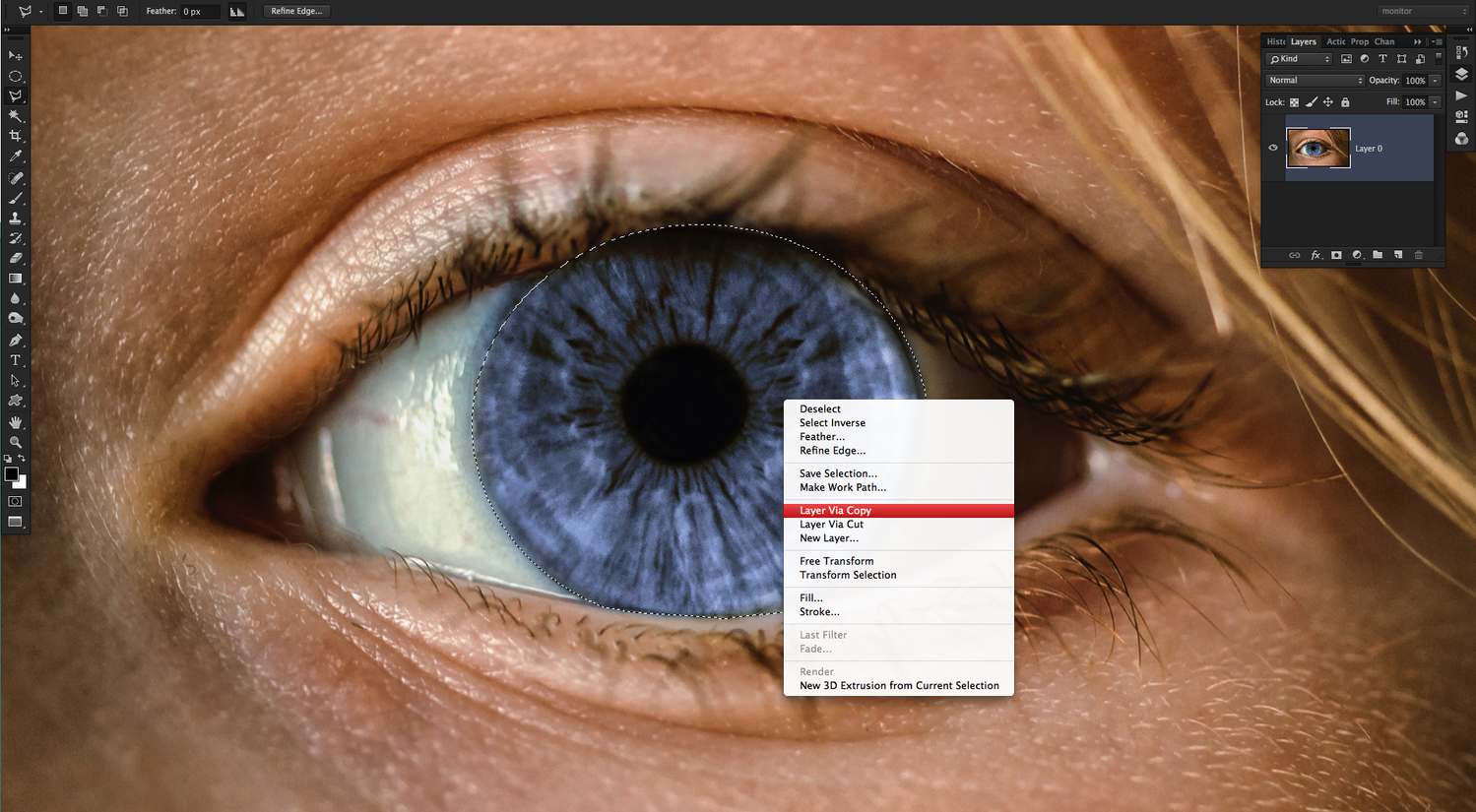 With your newly made "Iris" layer, it's time to bring up the Layer Style dialog box. Do this by double-clicking anywhere on the layer's thumbnail in the Layers panel. Once this dialog box is open, click on "Inner Shadow," which will activate the style we want and bring up the controls to fine tune the effect. 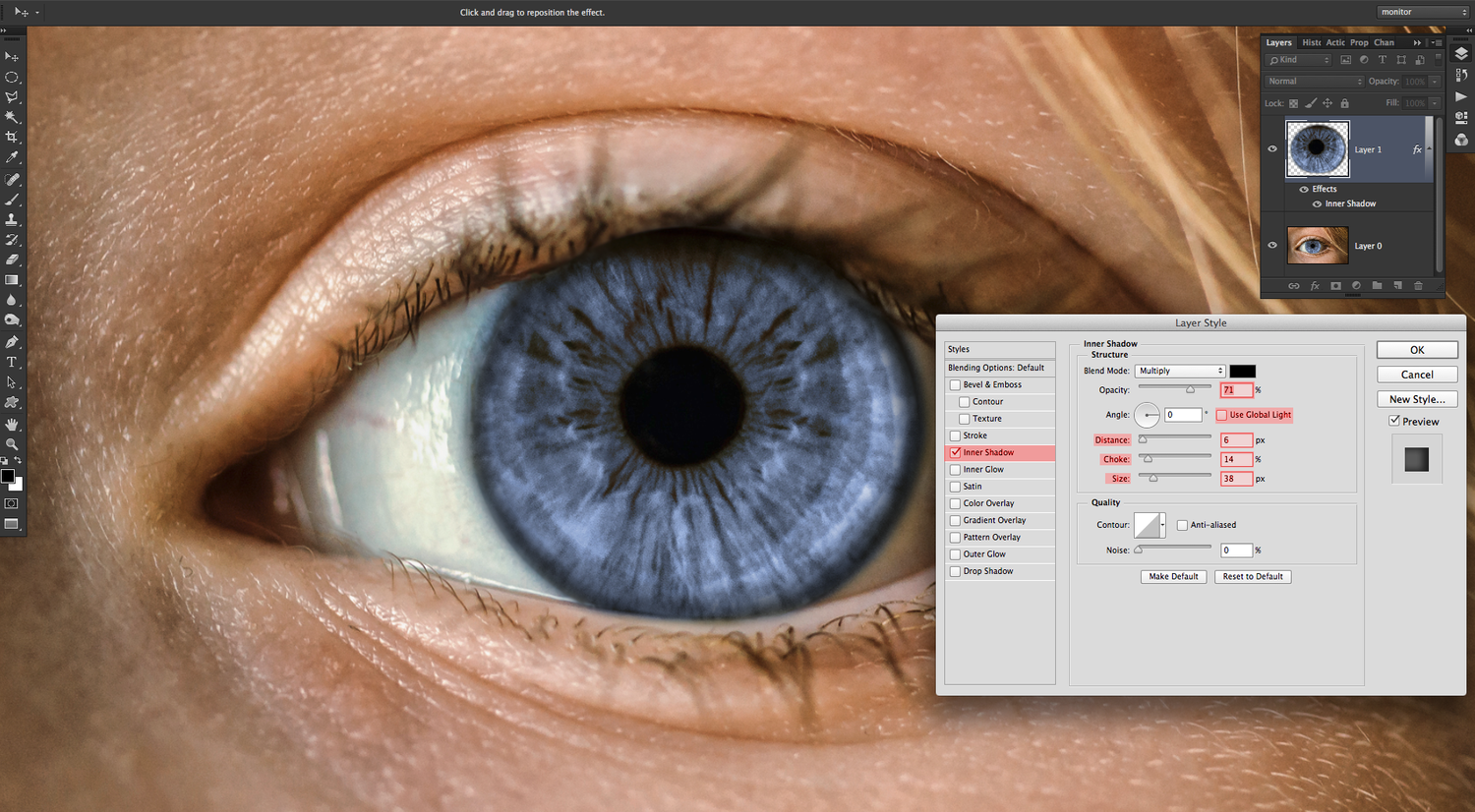 This is where a combination of the "Distance," "Choke," and "Size" sliders are used to create the look of the limbal ring. I found that it's worth unchecking the "Use Global Light" box, which seems to give you more control over the position of the shadow. I also dialed down the opacity to 71 percent, which helped with the realism. Once you're happy with the results, it's time to flatten your layer. 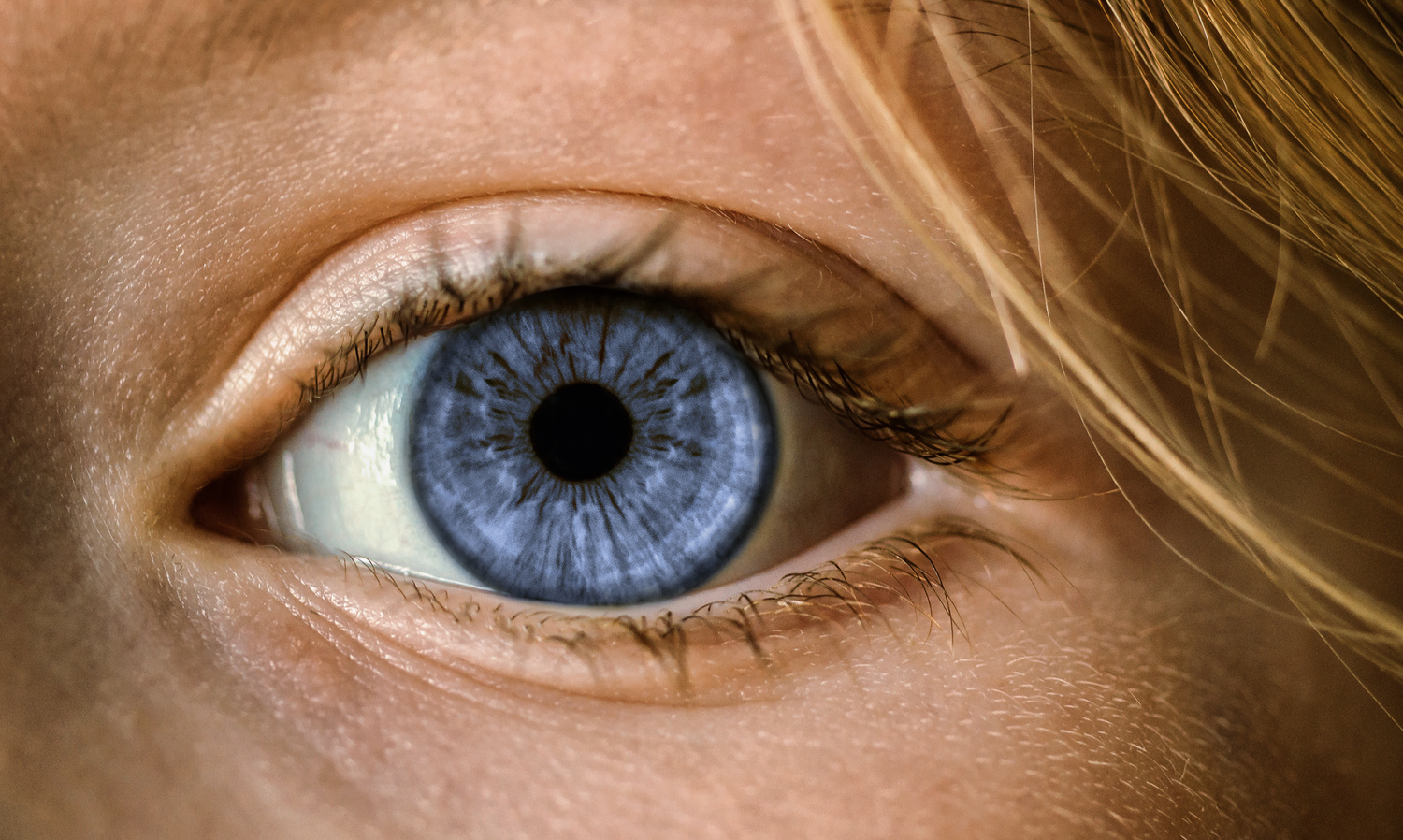 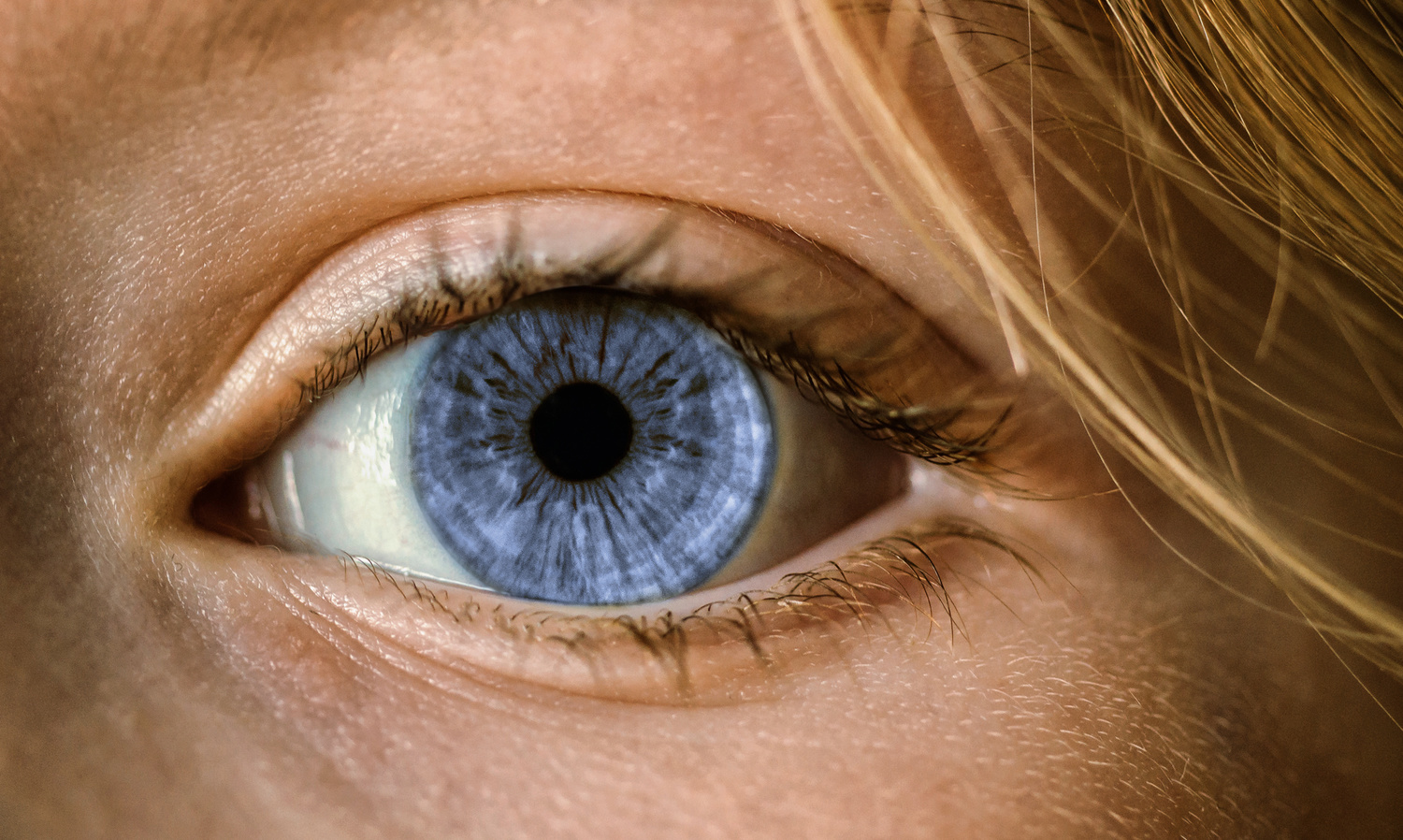 So there you have it — just one way you can use Photoshop to tap into our biological instincts and make a subject appear more attractive- and youthful-looking. The eyes receive greater attention than any other feature of the face, which is why I believe it is well worth going to the effort to make them look their best. Even if scientific findings hadn't told us why a dark limbal ring is so desirable, I'm sure you would agree that, regardless of biology, they just look visually better that way.

If you'd like to further enhance the eyes, you might find it helpful to read my other article on how the size of the pupil also plays a role in our perception of a person. I do hope all my scientific research is put to good use artistically and not just used to edit people's dating profile pictures! On a serious note, I'd love to hear if you prefer the eye with or without the limbal ring. Leave a message in the comments below.

Education / August 29, 2019
Neuroscience Kung Fu: Use Contrast to Immediately Guide the Eye to the Most Critical Elements of Your Images

Astrophotography / June 14, 2019
An Astronomical Plugin for Beginners Afraid of Photoshop

Great idea. I always do it "free hand".

Totally over the top and needs more gradation

If you google image search a youthful limbal ring its dark, solid, with little graduation.

To quote my own article:

"In the context of attractiveness, both thickness and clarity of this black line play equal parts in how highly someone is perceived."

Sorry, I am not talking about clarity... A quick look at the Afghan Girl will exactly show you what I mean. Your ring is too wide, and ending too smoothly and abruptly...

While I agree with you on a little graduation. I'm struggling to understand your "over the top" reference. I actually modelled my example on my own eyes.

Here is your afghan girl. Mine looks under done compared. 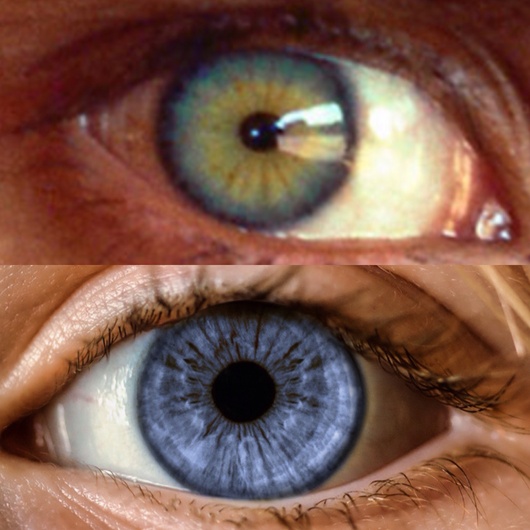 Seems like caucasians, especially those of European origin have colorful eyes. Those living in Africa, Middle East and Asia have dark brown eyes. Your theory that beauty is enhanced due to having a limbal ring only seem relevant to those with eye color.

First, it's not my theory it's the findings of an independent scientific study, check the link above for the info.

If the eye is darker a limbal ring can still be visible, all be it a little harder to see...

I've finished eyes like this for years. With exception that I've done it by hand without a 'feathered selection', and with a flow of about 7 to 8 % on the brush to build it up over strokes. When I've referred to peoples limbal rings, I usually get that 'dog hearing strange sound' look.

Haha welcome to the club! Never try the limbal ring as a chat up line. Always goes down like a lead ballon ;)

I hadn't heard of this before, but I will certainly try this during my next session. Thanks!