Sex and stripping seem to go hand in hand, but in this edition of the A to Z of photography, I cover the acclaimed work of fashion photographer Bob Carlos Clark, "Shooting Sex" and then delve into the technical details of the photo finish.

Shooting Sex is the eponymous semi-autobiographical work of Bob Carlos Clarke (also this link). With 176 13x11" glossy pages, this weighty hardcover tome is about how to shoot on the theme of sex rather than sex itself (or, as the subtitle goes, the definitive guide to undressing beautiful strangers.). The art world shows over and over again that the thought of sex sells and has remained a stalwart of photographers as we've seen with the work of Paul Outerbridge and Helmut Newton. In fact, Bob Clarke has been referred to as the British Helmut Newton. Clarke notes that "Eroticism relies upon a finely tuned conspiracy between the eye and the imagination."

Born in Ireland in 1950, he moved to a number of English public schools before finally finding his niche with photography, completing an MA from the Royal College of Art in 1975. It was during his time that he began photographing nudes, initially his fellow students, before moving on to models and strangers, selling the work to the likes of Men Only and Club International. This led to his introduction to latex and, specifically, shooting women clad in it. As he would write in Shooting Sex:

I devoted the following decade to shooting women in high heels and got myself thoroughly rubber-stamped with a reputation that became something of an embarrassment a decade later when pink-rubber party dresses became synonymous with bottle-blonde bimbos and provincial sex shops.

While, in essence, he shot the fetish scene, he was not part of it. His fascination with latex perhaps reflects society more widely when he said:

[It] was the way it contained a body, concealing imperfections and defining contours beneath a gleaming synthetic skin.

Clarke most definitely had a way with words, possibly a closet writer whose out-pourings came visually; he was witty, sarcastic, self-deprecating, and painfully honest. So, Shooting Sex not only tells his life in tableau, it is also a technical guide to the subject. He was known for his indiscretions and was pretty direct on this point: "Photographers don't to have to sleep with their models, but it helps." Likewise, he was known for his close affinity to photography as an art form, seeing those ideas come to fruition in the darkroom.

The heart of photography is its ability to capture an irretrievable and unrepeatable moment in time. This is what makes it unique and more relevant to our daily lives than any other visual medium.

He decried the arrival of digital: "I'll be sad when digital technology delivers the coup-de-grace to the traditional darkroom. I still get a buzz when I pull the freshly-processed negatives out of the developing tank." On studio technique:

If daylight is an all-powerful goddess, flash is a wanton bitch who likes it rough. Dress her up in garishly colored gels, force her into all the darkest, dingiest places, bounce her off walls and floors, and she'll love you for it.

However, Clarke's ability went much wider. His photographs for celebrity chef Marco Pierre White's book "White Heat" are generally credited with inventing the genre. Shooting Sex also talks about the fashion industry, so that, when seeing a downturn resulting from his reputation, he commented: "At every level, this business is riddled with bullshit and bigotry. The only way to tackle it is to turn its weaknesses to your advantage. So, I changed my identity and began working under a pseudonym."

He also includes asides of encounters, meet-ups, and photoshoots with the likes of Robert Mapplethorpe, Princess Diana, Rachel Weisz, and Keith Richards. Shooting Sex offers a fascinating insight in to the life and mind of one of the top fashion photographers of his generation. It will make you laugh, wince, cover your eyes, and quite possibly walk away insulted. Probably all of the reactions he wanted to elicit. Sadly, he also appears to have been a tortured soul, his wife describing him as "entertaining, moody, and cruel." As his success climaxed in the late 1990s, so his dissatisfaction increased. Maybe he sought meaning beyond the commercial aspects of his work and the demands this placed upon him; however, shortly after checking himself out of the Priory Rehab Hospital for depression in March 2006, he committed suicide by jumping in front of a train. His work lives on as a reminder of the vision and tenaciousness he brought to photography; however, it's also of warning of the exacting demands of being an artist so strongly in the public eye. The toll can be high.

This title suggests a continuation of a theme, but actually it's what it says on the tin, namely photographing in strips where a 2D image is formed from a series of 1D strips exposed over time. The simplest way to capture a strip image is to to take a panning shot of someone running; by rotating the camera in the direction of motion while exposing the frame, we reverse the sense of blur. That is, the camera moves relative to the static background (so blurs it), while remaining (relatively) static to the moving foreground and so, freezes it. However, because of the movement of the camera, we essentially end up photographing strips. 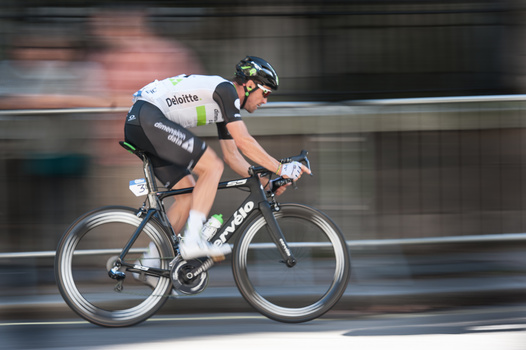 The other main branch of photography that has used strip imaging is the panorama where the film camera is rotated while recording an image to enable a wide field of view. Surprisingly the strip panoramic camera dates to as early as 1843! Typically, this would utilize a lens that incorporated a slit aperture to expose a strip of film as the camera rotated.

Of course, the alternative to moving the camera is to move the film (you can try this at home)! The most common use of this method was for the photo finish in sports, where film is continuously fed through the camera and so, constantly exposed. This was initially developed in the 1930s; at that point, the fastest frame rates were 65 fps, which typically missed the instant at which the line was first crossed. And the sport which first used it? You guessed it, horse racing! As the film is continuously exposed, there is no "frame" and so, no instant to miss. You were guaranteed to see when the line was first crossed. Of course, as the image below shows, this won't solve the problem of a genuine dead heat or triple dead heat as in this example! I still remember watching the Olympics in the 1980s and wondering why the runners looked so weird in the photo finish images; it's because they were using a strip camera! George Silk famously used and popularized strip cameras for sports shots in Life magazine starting with the 1960s US tryouts for the Olympics. 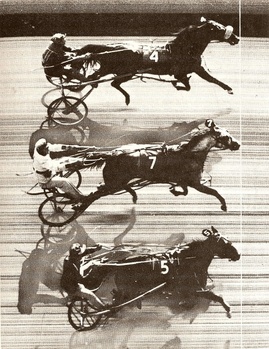 Digital cameras work inherently differently, as, unlike their film based counterparts, they tend not to have a global shutter. Or rather, the CMOS sensor electronics read them image a line at a time (like a strip camera), and this limits the maximum shutter speed achievable (typically 1/30th second) before artifacts are introduced from the rolling shutter effect. The classic example is photographing a rotating propellor. Mutations of the digital camera approach include the digital line scanner, which is a 1D CCD array. Panoscan made a range of line scanning panoramic cameras.

One variation on the strip image, which falls generally within the genre, is the production of "day to night" images that blend a 24 hour period. While there have been scientific uses of extracting a single column of pixels, day to night scenes are more artistic in their blending of scenes. NPR have great introduction to the work of Stephen Wilkes ,who produces visually breathtaking images.

Did not read but I predict many comments for a page view win.

The first use of any new technology will be sex and war.