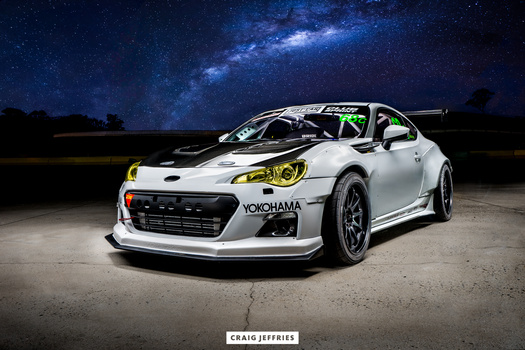 Just finished this, and it feels like it's been an epic journey. I shot this back in October 2015, and have just finished it off today.

I've had a new job between then and just haven't had the time. Especially since I don't shoot for a living it's hard to find dedicated time. The edit time has been in the vicinity of 15hrs for this. It might have taken less time normally, but when you only get a couple of hours at a time, sometimes you have to waste time going over where you were up to getting into the groove again.

The sky is dropped in, I'll happily own that. I got the idea as I'd shot this sky only a few months before taking this shot, and the sky tones were very similar so it wasn't too difficult in the end.

The car itself has been lightpainted entirely using a 300LED light through a softbox with 9 separate shots.

A lot of time has gone into cleaning up the paint - being a race car, some bits were not perfect and had some seriously chipped paint. If this was only going to stay as an internet only post at 1000px then I could have finished editing at least +5hrs ago. When the aim is to have a large print, then to me it has to be pixel perfect.

Shot for the car's owner and myself :)

Holy shit, this is unreal. I've been staring at this for probably 15 minutes.