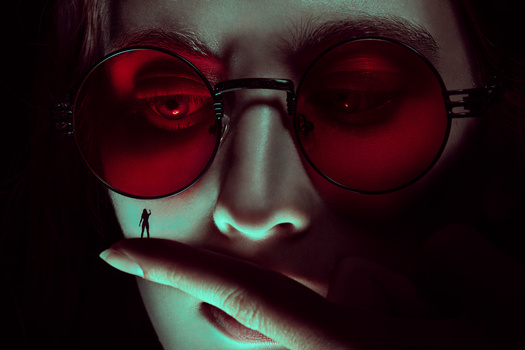 My local photography club runs a weekly photo challenge, and the theme of the week was “big.” I wanted to create a self portrait that represented my inner critic.

This was a composite of two images.
The small figure was just shot by shooting light into a white background and putting the subject in front. I then cut out the figure out and placed it on the finger of the main image.

The main image was shot with two lights. The key light is below to create monster lighting and an unsettling effect. I also lit it this way so I could get away with a silhouette for the figure. The key light was a @flashpointlighting XPLOR600 with a 10 degree grid. There was also a gridded reflector on a Flashpoint streaklight360 overhead to bring a little light from above. Essentially, it was a reverse clamshell setup.

Cool shot. I love the glasses and that you went complementary with the coloring. It is also interesting that you can interpret the concept in two opposite ways. You can be overwhelmed by your inner critic that looks down on you tiny whatnot. It can also be the other way round, that you are only mildly bothered by this pesky inner critique, or if you deviate from critique to conscience, the small figure can just be the remnants of one.
Technically, the lower ends of nose and lips seem a bit bright. Especially the nose competes with the figure in that regard. I would have probably tried to use a darker raw conversion to mask in over those areas, but I am not sure that would actually improve the image. I do not even mind the brightness that much in the first place.
I get a bit of a movie vibe from the image and I struggle a bit to place my finger on it.
In general, you are shooting on such a high level, that there is not much to add besides praise, which is pleasing to look at, but not from a critiquing standpoint. Maybe the critic is the small figure after all. Anyway, good job. Always looking forward to your next creation.

Thanks for your thoughtful commentary, Andreas. Though the critic is intended to be the larger figure, I think you're right; in the right context, the critic can be the smaller figure too.

I agree the nose is a little bright; I'll keep that in mind the next time I try something like this!

I keep hearing the movie poster comment on this one! I suppose this color grading is a bit cinematic in style.

Thanks again for your wonderful commentary!!

Damn Emily. This is great!

Thanks, Jordan! Much appreciated!