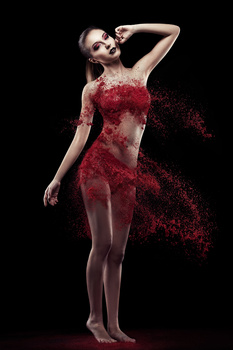 I came up with this project after seeing so many photographers playing around with liquid (mostly milk and water). It fascinated me to see how cool it looked under artificial light. Furthermore, seeing something fall being frozen by the short duration of strobe made those pictures look like time had been stopped.I wanted to give it a try and it was a good excuse to try out the new Elinchrom ELC Pro HD.

I didn't want to create something similar to what had been done, so I thought I had to get away from liquid and find something else to throw on my model. I tried a few things and randomly found that sugar looked great. Because it's clear and slightly shiny, under the light of the strobes it took a whole new dimension.

The shoot in itself took about 5 hours for one picture. We used roughly 8kg of sugar and did 154 throws to get the pictures I needed to create the result I had in mind. The final picture is a composite of 50-60 throws. No need to say, the retouching took some time...

The amount of work you put into getting a single image just blows me away. Great job!