Facebook Software Engineer Teaches You How to Steal Copyrighted Images

According to his bio, Jesse Chen is a software engineer at Facebook and recent graduate of UC Berkeley. Jesse has a personal blog which we recently stumbled across that includes a blog post from 2012 that detailed how to go about stealing copyrighted images and removing watermarks.

The  (UPDATE: The blog post has since been removed.) starts off by congratulating recent college grads and expressing frustration about not being able to right click proofs of grad pictures (in order to avoid paying for them). But never fear, Jesse Chen and Jonathan Tien have come to the rescue with a tutorial to show you how to rip off the photographer who took them for you by bypassing the blocked right click and removing that "ugly copyright overlay" in Photoshop. 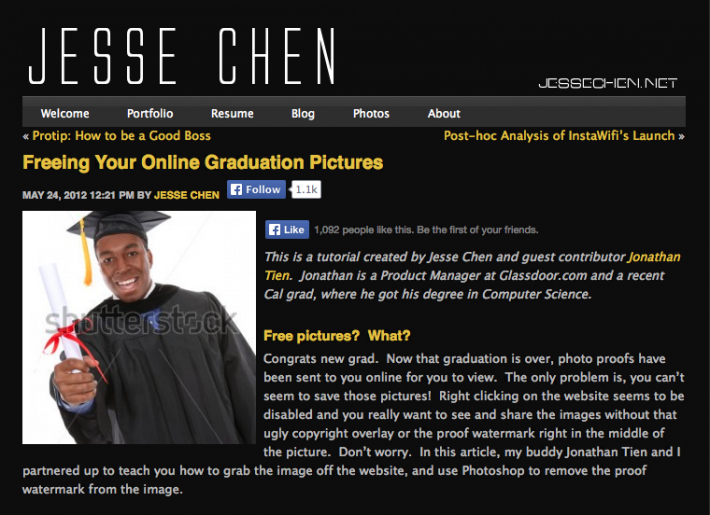 Jesse links to his own graduation images, here which he uses in the tutorial.

The article continues by detailing the steps involved to get to a high-res copy of the image (still watermarked at this point) in three different browsers. [UPDATE] in respect to Grad Images we have taken down the original screencaps and have replaced them.

And just like that you're a master Photoshop-wielding image thief. Congrats. 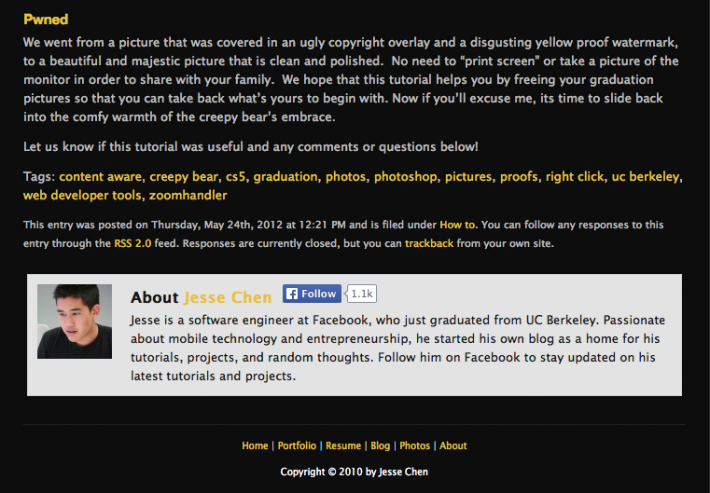 This attitude towards photography is toxic and seems like it's becoming more and more pervasive. What Jesse fails to realize is that the photographer who took those images owns them- there's a copyright notice for a reason. As a software engineer, I'm sure Jesse wouldn't be cool with someone stealing some of his code for use in their own website, even though it can be done just as easily. This tutorial is not about "[taking] back what's yours to begin with," it's stealing what someone would kindly sell you (as low as $10). If you want free pictures have your family take them.

Even if Jesse is posting as himself and not as a representative of Facebook, when you work for a company and explicitly show that in your profile, your words are associated with that brand. Disappointing, to say the least.

Take him to court!!

Terrible. I can't believe he is so oblivious to the fact that he's actually stealing! I hope that dude get's blasted by a bunch of angry photographers and fired from facebook for unethical behavior.

Facebook was founded under the premise that hacking is justified and glorious. He is going to get a promotion.

There's some truth to this. I just got my degree in computer engineering, and I spent a year focusing on security engineering and cryptography. You have to know how to break something before you can build it stronger. One of my brightest professors had a professional focus on breaking digital watermarks, but not the visual ones, as seen above. He worked with watermarks hidden in a couple of flipped bits. Nearly impossible to detect and just as difficult to remove. He'd enter and hold competitions to see how efficiently these could be broken, and then he'd try to figure out how to make the digital watermarks stronger to those attacks.

If this kid works on the fb photos team, there's a chance he might be working on improving these kinds of hidden watermarks right now, and that post may have helped him land the job. Of course, I don't know his story, and there's a definite difference between whitehat and blackhat hacking, but I wouldn't want to risk making an ass out of myself for tarring and feathering someone who may be writing an algorithm that will help me keep my photos secure in the future. That would just be embarrassing.

https://www.facebook.com/jesselchen/about
A quick FB search seems like he have a photographer brother; and he's more a editor and PS wizard. Just a shout out for Jesse, I would remove personal info like your own car's licence plate on FB ASAP. I bet your post pissed off a lot of photographers.

Wonder if he is willing to let all of us copy his source code? Why not...everything should be free after all.

Heh! That code probably belongs to Facebook. He probably glossed over the part that it is illegal to use code you have written on the job at Facebook in his in-processing paperwork that he signed as a new hire at Facebook.

Most times these water-marked graduation pictures are worthless 800px proofs that I doubt anyone can be bothered to try to steal anyway. Nonetheless, it is incredibly disrespectful not to mention illegal to steal any copyrighted photos like this. That said, I still think people charging $35 for a digital original of a mediocre picture taken at the graduation/commencement are blatantly ripping off graduates and their parents. I know because I had to buy one for myself for $35 from some random dude that was contracted by my college to work the graduation, exclusively.

Most people these days only want them to share on social media anyway, so 800 px is plenty for them.

Not in my business of sports photography. Prints are hotter than ever and they are flying off the shelves.

At least people aren't going to steal your printed images though, like they can with digital ones.

Oh Really? Allow me to introduce you to the concept of extremely high resolution colour photocopying. That makes the rip-off a single button process making it even easier.
Then of course there is the high resolution colour scanner.
I suppose a simple solution to ensuring protection of your IP is to not put it on the 'net in the first place. But now of course I now hear the screams of outrage at the concept and the howls of pain suggesting the net is a legitimate advertising forum. My response- you can't have your cake and eat it too. If you post expect to be ripped off. It's the same as placing a $100 bill on the ground in a public place in the morning. Would you expect it to be there tonight? Photos on the net are the same. As soon as you leave them there they are going to be ripped off.
Does that make the rip-off right? Absolutely not but at least recognise it will and does happen. It is simply a business risk.

Presumably people would have to pay for the print first in order to copy it. That's not the case with digital image theft. Sure posting online is a business risk, but the attitude that if I can steal it, why pay is a sad reflection on society nonetheless.

I'm willing to bet those photographers have deals with the universities to charge a low day rate, in exchange for being the exclusive shooter present. That's why they can charge $35 per download, which let's not forget you ended up paying. I wouldn't call it a ripoff so much as a shrewdly effective business ploy.

Dude
Nobody cares what you think about the size; quality; rip-off/not rip-off; usage; pricing; acceptability; etc.
This ENTIRE discussion is about theft; legalities; moralities; and ethics.
Buy a vowel.

maybe best not advertise for him by publishing his tutorial. What do you think?

Bringing attention to something isn't quite the same as advertising. I'd say in this instance "any press is good press" doesn't really hold up.

It's not about whether it's good press or not. You've helped spread the word about something that I think we all agree shouldn't be publicized. How is that helping the cause of photographers?

It's all about bringing attention to the problem.

And in this case bringing attention to it only makes it worse. You could have reported that there was a tutorial posted out there which gives step by step instructions without reporting it in detail or giving a link. You could then have said that you've contacted the author to request it be taken down and you'll report on his response. Instead you've just spread the word to allow more people to discover the method, and as I said in my own comment your post is likely to rate higher on SEO results for people looking to steal photographers work.

The reason I took steps to document the entire page is to have proof that it existed. As you can see for yourself, the post has already been taken down. There'd be no way to check that what I had reported was factual.

But you've preserved it here! Can't you see that's worse than not having reported about it in the first place?!

You've screen-capped the whole process step by step, for posterity's sake. I get your intentions, but yeah I agree pretty foolish and myopic on your part.

Having proof, and publicizing it is 2 different things...

You didn't need to copy the tutorial to bring attention to something.

You could have written an essay on your thoughts and what you think it means (more than 15 lines...).

this argument is like the news showing body parts of 9/11 victims "so we understand the horror".... NO NEED!!

I feel bad for photographers that have to make money from selling the pictures. Best scenario is to just get paid well for the job itself and give the pictures away for free.

Unfortunately getting paid upfront is not the business model for scholastic photography. Most photography companies like GradImages actually bid on contracts for high schools , school systems and Universities. They pay the school in the form of a scholarship donation for the exclusive rights to photograph the graduation and other school related events like fraternity/sorority and athletic events. For grads I know it's as much as $2-$5 per graduate depending on the size of the school.

Goes to show how much you don't know about the various ways of working inside this industry. Lots of different contracts for varying markets.