Camping in the back yard

My kids love camping in the back yard. I set up my camera to point north for some circular star trails, and maybe a chance of aurora overnight. It was a very clear night. In the beginning of the timelapse you can see the kids running around with their glow sticks as we setup the tent. Andromeda is visible next to the northern end of the Milky Way. Cassiopeia is in the middle of the Milky Way. The kids have a toy that projects stars on the ceiling and walls that we wanted to try out in the tent when they went to bed. It slowly rotates through a few different colors. Sped up in the timelapse video it looks more like disco lights though! The rest of the lights in the tent are from the kids’ glow sticks. Pleiades shows up briefly on the right side in the middle of the timelapse, but goes out of frame after a few seconds. The bright star that rises out of the trees afterwards is Capella. There was a little bit of green airglow in the early morning hours, but no real aurora.

I didn't setup anything too fancy for this timelapse, no bulb ramping or anything too complicated. Just single 30 second exposures every 3 seconds until dawn with a Promote Control, Nikon D700, and Nikon 14-24mm f/2.8 @ 14mm, f/2.8, and ISO 2500. White balance was gradually changed with LRTimelapse during post-processing. I used a Dew-Not heat strip with a DewBuster controller overnight to prevent dew, and powered the dew heater and camera from a 12v battery. 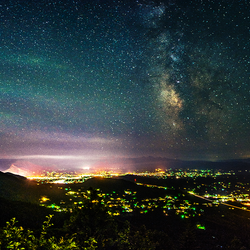 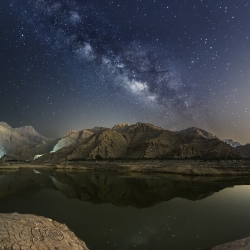 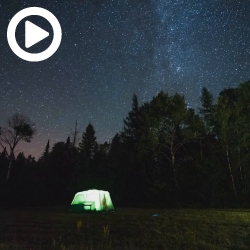